The Diana 25 (this one says Winchester 425) was made for decades. It’s at the top of the youth line of air rifles that were made from the ’50s through ’70s.

Today, I’ll test the Winchester 425 (Diana 25) breakbarrel air rifle for velocity and power. When I shot the rifle, the ultra-smooth firing behavior suggested that it might have been tuned. And a faint whiff of burned grease confirmed it. I shined a tactical flashlight down into the cocking slot and saw the mainspring is coated with a thin layer of black tar — proof positive the innards have been breathed upon!

The second clue as to its past is that the rifle was owned by my friend Mac before I got it. I know he loves this platform and does not fear taking one apart to make it better.

Finally, the trigger is adjusted to perfection. Mac knows how to do that, as I described in Part 1 of this report. The trigger is two-stage with a very long first stage that stops at a definite second stage before breaking crisply at the shot. I would not call it a glass-rod trigger, because the excessive overtravel after the trigger breaks makes it feel less precise than it really is, but if you’ve never sampled a fine sporting airgun trigger, this one would amaze you. The only aspect that might put some people off is that the first stage has to be very long for the second stage to be crisp. You can try to shorten stage one if you like — but then stage two disappears, and the trigger becomes a guessing game.

The trigger return spring on this rifle is heavy enough to give the first stage a 1 lb., 1 oz. pull weight. Stage two breaks at 2 lbs., 15 oz., and I doubt you’d guess it to be that much.

Cocking effort
One reason I love little breakbarrels like this model 25 is their light cocking efforts. This rifle has a ball-bearing detent that makes the barrel break open easier. Then just 14 lbs. of force are needed to cock the rifle. That’s so little that pre-teens will find it easy. Of course, this particular example is as smooth as they come because of the tune it’s received, but even a rusty old relic that’s been sitting up in the loft of a barn for 30 years will still cock pretty easy. 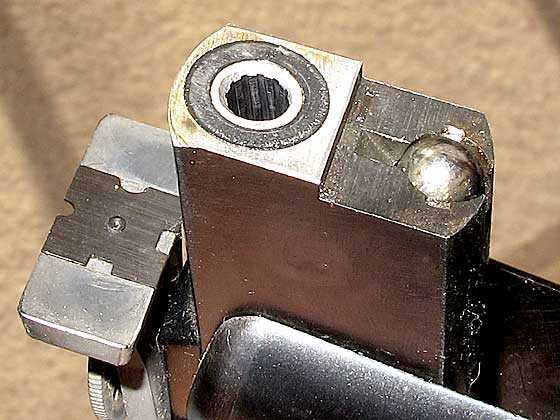 Instead of a chisel detent that has a powerful spring behind it, the Diana 25 barrel is held closed by a spring-loaded ball bearing. It is much easier to open and close the barrel, yet it stays shut when the gun fires.

Remember, this is a .22-caliber air rifle — not a .177. This is a case where the smaller caliber probably would have been the better choice, but folks with large fingers will still appreciate this one for the ease with which it can be loaded.

RWS Hobbys
The first pellet I tested was that old standby — the RWS Hobby. In .22 caliber, this wadcutter weighs 11.9 grains and typically offers the highest velocity of any of the lead pellets. In the test rifle, Hobbys averaged 440 f.p.s. The spread went from 421 to 458 f.p.s., which is a fairly broad 37 f.p.s. range. They loaded firm, as if fitting the bore well, so I expect them to do well in the accuracy test. At the average velocity, Hobbys generate 5.12 foot-pounds of muzzle energy.

Deep-seating
From what we learned while testing the Hy Score 801 rifle that has a pellet seater built into the barrel, deep-seating pellets can sometimes increase velocity and also stabilize the overall range of velocities achieved. I tried seating the Hobbys deep into the breech. The result was a large loss of velocity — from 382 to 408 f.p.s. for the deep seating! That tells me the model 25 doesn’t like its pellets seated deep, so I didn’t try it with the other pellets.

JSB Exact Jumbo Express
The next pellet up was the JSB Exact Jumbo Express dome that weighs 14.3 grains. This is a pure lead pellet, and it fits the rifle’s breech very nicely, going in easier than the Hobbys. These averaged 417 f.p.s. and ranged from 414 to 422 f.p.s. That’s an incredibly tight 8 f.p.s. spread across 10 shots! I want to note that this pellet also went deeper into the breech with just finger pressure. That means the skirt was not subject to damage when the breech was closed — something I can’t say for the other two pellets I tested. This pellet produces 5.52 foot-pounds of energy at the muzzle.

The last pellet I tested was selected for a very specific purpose. I’ve found in the past that taploaders that have large holes through their taps — such as the Hakim trainer — need a soft lead pellet with a very thin skirt so the light air blast will flare the skirt out to contact the bore and seal it against air blowby. Even the RWS Superdome has a reinforcing ledge inside its skirt that prevents this from happening. But the RWS Superpoint doesn’t. The Superpoint skirt is very thin, soft and pliable; and it seals better than any lead pellet I’ve ever used. I like to at least try them in low-powered spring guns like this model 25 air rifle because they often give very good results on paper.

In the test rifle, Superpoints averaged 377 f.p.s., and the spread was from 373 to 383 f.p.s., so only 10 f.p.s. The Superpoint weighs 14.5 grains, so at the average velocity the muzzle energy was 4.58 foot-pounds. With the first two pellets as a comparison, I wouldn’t call this a great performance.

How does the 25 compare to the Diana 27?
For no better reason than the fact that I was curious, I then tested my Diana 27 (Hy Score 807) with the same pellets. I figured it would be a little more powerful than the 25, but not a lot.

Impressions so far
I wish this rifle was still being made so more of you could experience it. It’s a delight to shoot. It cocks so easily, and the trigger is a dream to use. Let’s all hope the accuracy is there, as well. I’m not looking for tackdriving accuracy at 25 yards this time — just nice round groups at 10 meters because the Diana 25 is a plinking air rifle — first, last and always.