Sometimes, you find something works, and you stick with it. Apparently, the title of this report is one such thing. I seem to keep coming up with this title, yet my reports don’t seem to be related. Oh, well, consistency is the hobgoblin of small minds.

Today’s report is going to sound like a Friday blog, but that isn’t intentional. I just have a couple random things to say, and it’s going to come out that way.

I’ll start with the real reason for today’s report — new airgunners. Five years ago, we also got new airgunners; but back then they came from everywhere — not from one particular place. Some were people wanting to learn the basics of shooting, others were firearm shooters who wanted to try airguns for a change and others were people who had shot airguns in their youth and wanted to see where things had progressed since then.

Today, it’s different. The bulk of our new airgunners are now coming from the firearms side of the shooting sports. They’ve been shooting firearms for a while (some longer than others, obviously), but they admit they’re new to airguns and want to learn. Oh, they were always aware that airguns were out there, but they didn’t give them much thought. That changed when the ammo supplies dried up here in the U.S. These people like to shoot, and they see airguns as a way of doing that without hindrance.

I know this from the comments we’re getting on the blog, plus the number of new readers who are commenting for the first time. I noticed that whenever I write a report about something fundamental, there’s lots of discussion. Five years ago, I got more criticism that I wasn’t reviewing airguns as much as readers expected; but today, I’m getting real questions about the fundamentals of shooting. I think that’s great because we can all stand to learn more about our sport — me included. Just because I write this stuff doesn’t mean I necessarily know any more about it than anybody else. I’m just the guide on this trip — not the destination.

So, I visited a local large sporting goods chain store last Saturday. It’s Academy Sports, for those who know it. And I noticed that their shelves were packed with all kinds of shotgun ammunition, plus a healthy variety of rifle ammo (considering recent times). Looking at things like this is something I do a lot these days to find out where we are in terms of the availability of ammunition.

Then, my eyes fell on several plastic-looking bows. Now, I know next to nothing about bows. I’ve owned them and shot them, but I was never what you would call an archer. So, I’m looking at these plastic bows and let me tell you what I saw. They looked cool! Two were compound bows with pulleys, and one of them was priced at around $45, while the other was a whopping $95! I may not be an archer, but I know that a compound bow should cost several hundred dollars. Yet here were two of them for under a hundred each, and they looked good.

That was when it hit me — for me this experience was just like a firearm shooter looking at a super-powerful breakbarrel spring-piston air rifle from China! I know why those kinds of airguns are not special — I’ve had hundreds of experiences with them and could write a book of warnings about what you get for $129 from a discount sporting goods store. But the firearm shooter who considers them seriously for the first time doesn’t know what he’s looking at. He needs help — just like I needed help with the bows.

These two black plastic bows (each was stapled to a colorful cardboard backer, if that gives you any sense of their quality) looked very cool. So — that is what it must feel like to be a new airgunner and wonder why a Walther LGV Challenger costs so much more than a Winchester 1028 air rifle combo, when, according to the description, it doesn’t shoot nearly as fast, nor does it come with a scope!

I wanted to ask someone right then and there what the differences were between these cheap compound bows and a good one, but I knew that no salesperson in the store could answer that for me. And any customer who might try to help might be as confused as I was — but perhaps 6 months farther along the trail of tears — learning about bows the hard way.

So, I will continue to write about the fundamentals of both airguns and of shooting, along with the detailed tests of airguns…because I know there are many people who need to hear this stuff — and some who should know better also need to hear it again.

A related thought
I’ve been thinking of visiting a new archery store that opened several months ago — just to see what’s new. More specifically, I want to know about new crossbows. I haven’t been in this store yet, but conversations from several archers have led me to believe that perhaps they do not even carry crossbows! Know why? Because people who shoot longbows think very poorly of crossbows.

Is it possible that a retail store — one that has been established for the purpose of succeeding and making its owner money — would not carry a product that most people believe to be in the same realm? After all — both longbow and crossbow have the word “bow” in their names.

Yes, it’s very possible. There may be such an animosity between longbow archers and those who shoot crossbows that the store owner might think he would drive away longbow customers from his store if he carried products from “the dark side.”

I used that term, the dark side, on purpose because that’s the term airgunners use to describe precharged pneumatics (PCP). Although they’re the oldest branch of airguns, those who shoot spring guns feel somehow that PCPs are the newcomers. And they are, if you only look at the modern ones that started in the UK in 1980. But PCPs date all the way back to the mid-1500s, while spring-piston airguns date from around the middle of the 19th century. Precharged pneumatics are, in fact, 300 years older than spring-piston guns, no matter how you feel about them.

My point is not to debate the history of the two powerplants. Rather, it is to point out that a schism exists right in the heart of the shooting sports. More specifically, within the heart of airguns that are only a pimple on the skin of the shooting sports. Arguing about the legitimacy of PCPs versus springers is like two fleas arguing whose dog it is. And, given the current political climate we are suffering in the United States, the dog has just been sprayed for fleas! 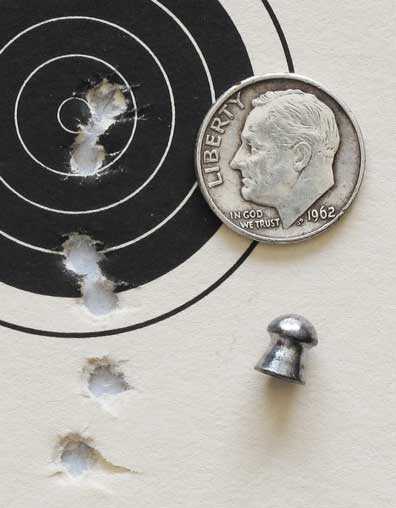