Got a lot to cover today, so let’s get to it.

First up is the Daisy Manufacturing Company, now called Daisy Outdoor Products. Daisy is best-known for the BB guns they make, but did you know they also made firearms? That’s correct. In fact, Daisy made 3 different lines of .22 rimfire rifles — though one of them is only a rimfire by common categorization. That would be the Daisy V/L. V/L stands for Van Langenhoven, the last name of the man who invented the caseless cartridge technology Daisy used to make this gun. I’ve covered this before when I wrote about the new Daisy book published in 2012.

Although it’s commonly classified with .22 rimfire rifles, the caseless round does not even have a rim. There’s no priming compound in this cartridge. This caseless cartridge was made from a material that combusts when heated rapidly by the compressed air of a spring-piston air rifle. So, the Daisy V/L is, in fact, an underlever spring-piston air rifle that just happens to shoot caseless .22 rounds. Daisy made their V/L rifle in the late 1960s (1968 & ’69).

Daisy also made a line of bolt-action rifles called the Legacy line in the 1980s and ’90s. These rifles have weird diecast and steel receivers mounted in both plastic and wood stocks. But they’re not the guns I want to discuss today.

I have handled both the Legacy and V/L rifles, but I don’t know much about them. What I do know something about is a Daisy rimfire that is even less well-known than either of these.

I also wrote about airgun makers who made firearms in 2006.

Daisy model 8
In 1988 and ’89, Daisy produced an economical .22 rimfire single-shot rifle for Wal-Mart. They were supposed to have built 30,000 rifles, but the contract was either terminated or somehow not completed; and the actual number of rifles made is something less. The Blue Book of Gun Values says they made 30,000 of them, but Joe Murfin of Daisy told me about the problem with Wal-Mart and said they didn’t make that many. Something on the left side of the barrel has been machined off. This is on every model 8 I’ve seen. 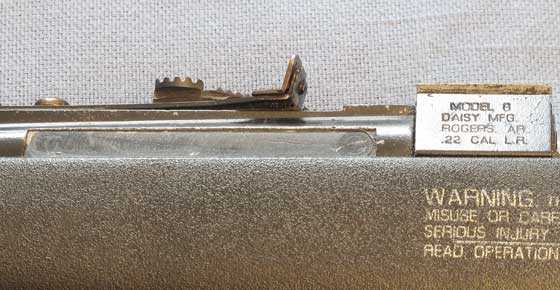 All the Daisy model 8 rifles I’ve seen (about 10) have had this area of the barrel machined off. Something was stamped there.

It has a painted action and barrel in a hollow plastic stock. The overall impression is — this gun is cheap. 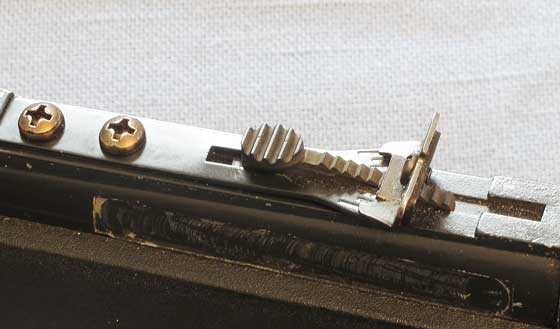 Daisy rear sight looks a lot like an airgun sight. It adjusts for windage and elevation.

Do you think that airgun companies are loaded with engineers wearing white lab coats? The Daisy model 8 looks more like something that was designed in high school shop class when the teacher was out on his smoke break. The designer is someone you all know — the kid without the eyebrows. The one who couldn’t hear out of his left ear. Later on in life, he was known as Stumpy; and before he turned 25, he disappeared completely.

What I’m saying is that this is a bolt-action rifle that’s designed with screen-door-latch technology. It began as an exercise to see how cheaply we could make it, and that was followed by two rounds of cost-cutting before corporate council pulled the plug for liability reasons. 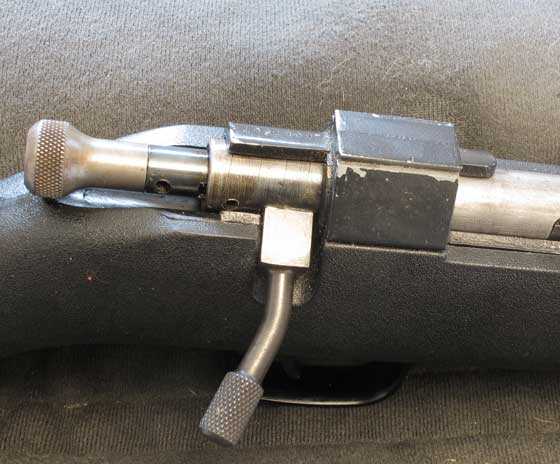 Model 8 bolt handle looks like common hardware! The receiver is a diecast part with a steel tube pressed in for strength.

Daisy model 8 (below) is just a little larger than a Crickett.

And I have one! Are they rare? I don’t know. Are they scarce? Most assuredly! Have some of them been lost over time? Almost a given! Are they worth anything? Not very much. This is not an heirloom gun — it’s a hair-brained gun!

I bought one just because of what it is. I also bought the Crickett to serve a basis for comparison. Both are small, but one (the Crickett) is designed by gunmakers, while the other (the Daisy model 8) looks like it was designed by McGuyver while he was in the throws of an acid flashback.

Yes, I have shot this rifle. No, it doesn’t shoot very well. In fact, it misfires about 25 percent of the time, which I attribute to a weak firing pin spring. Accuracy is on the order of 3-4 inches at 25 yards — so far. Maybe I haven’t found the right ammo, yet — ha, ha.

The Crickett
I said I bought the Crickett for comparison. I’m just throwing it in here because many more shooters are familiar with it than with the Daisy. Much of its design is similar to the Daisy model 8; but at every turn, you can see where its design exceeds the Daisy. I guess I would say the Crickett is just a small firearm, while the Daisy is more of a small example of what not to do. 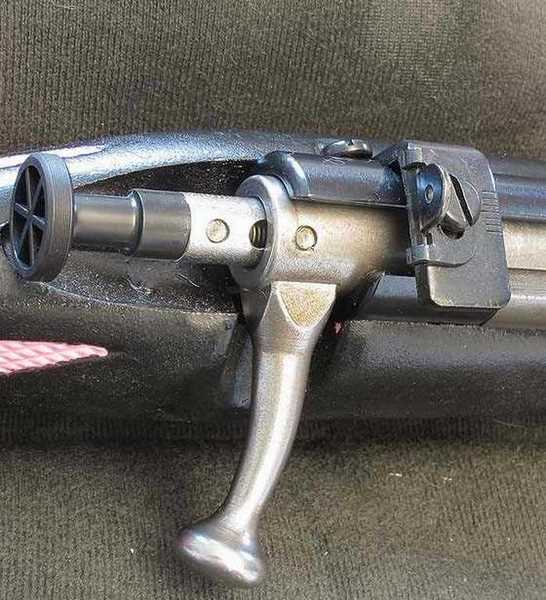 In sharp contrast to the Daisy, the Crickett bolt looks like a firearm bolt and the receiver is all steel. They even put a peep sight at the rear! Didn’t cost that much, but this is what designers can do.

I’ve also shot the Crickett, and it’s 100 percent reliable. While it’s no tackdriver, it will put its shots into 1.5 inches at 25 yards — and sometimes the groups are even smaller. In my estimation, the Crickett is a small, inexpensive firearm, while the Daisy model 8 is a cheap rimfire wannabe. Having said all that — who have I insulted? I sure hope your favorite .22 is not a Daisy model 8!

So what?
The point of this look is to see what an airgun manufacturer will turn out when they make a firearm. But maybe this Daisy model isn’t a fair representation because Daisy built this for their customer. Let’s look at another rimfire rifle that was made by a different airgun manufacturer, and this time they made it for themselves.

Compared to the Daisy model 8 (top), the Falke single-shot is a full-sized rifle.

This rifle is a confusing firearm. On the one hand, the walnut stock is shaped nicely and hand checkered, the metal polish and bluing is even and deep, and the action is cheap and stiff to operate. What should be the simplest of all actions — a single-shot — is machined very well, yet it functions like it’s been rusting in the corner for decades.

Falke was one of those “anything for a buck” companies that arose in Germany after the war. I’m sure they would have disagreed with that assessment, but the fact is they had no plan of succession; and when the founder got sick in the late ’50s, the company folded.

Where have we seen this logo before?

They made at least 2 firearms. This bolt-action rifle is one, and I’ve also seen a stylized Remington double derringer in .22 rimfire.

I bought this rifle because it’s a Falke and because it looked so nice on the internet. When I received it, I found it to be even nicer than the photos portrayed. But the action is stiff and clunky! I never would have bought it if I’d tried it first. However, I believe I can correct most of this with some careful gunsmithing.

The rifle is full-sized at 40-3/4 inches overall, with a 23-inch barrel. The pull length is 13-1/2 inches. The barrel is nicely rifled, and the gun appears to be in 90 percent condition. The wood has been sanded, which is the only detractor from the overall appearance.

The front sight is a common post with a bead, but the rear sight has the same quirky elevation adjustment that we saw on the Falke model 70 air rifle! With luck, this rifle will shoot. 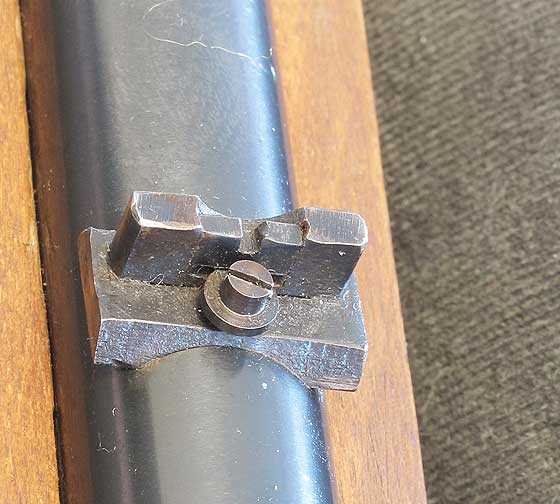 We saw a rear sight just like this on the Falke model 70 air rifle.

This is a bolt-action single-shot. It has a separate cocking piece that will cock the rifle by itself (without the bolt being operated), but right now the sear is under too much tension and the cocking piece cannot be pulled back all the way. The bolt cocks the action on closing.

Again — so what?
I’ve shown you 2 firearms that were made by 2 different airgun makers. My plan is to shoot both of them and come back to you with the results in the next report. I’ll do that as the rifles stand right now, but the Daisy really does need a stronger firing pin spring, and the Falke needs its action smoothed a lot.

Why am I doing this? Perhaps, to show the contrast of firearms and airguns made by the same maker. I think we have that in both these cases.

I know several of you readers probably own Daisy Legacy rimfire rifles, and I would like to hear what you think of them. If any of you own a Daisy model 8, you have both my apologies and my sympathy. And if anyone ownes a Falke firearm, I sure would like to hear about it! 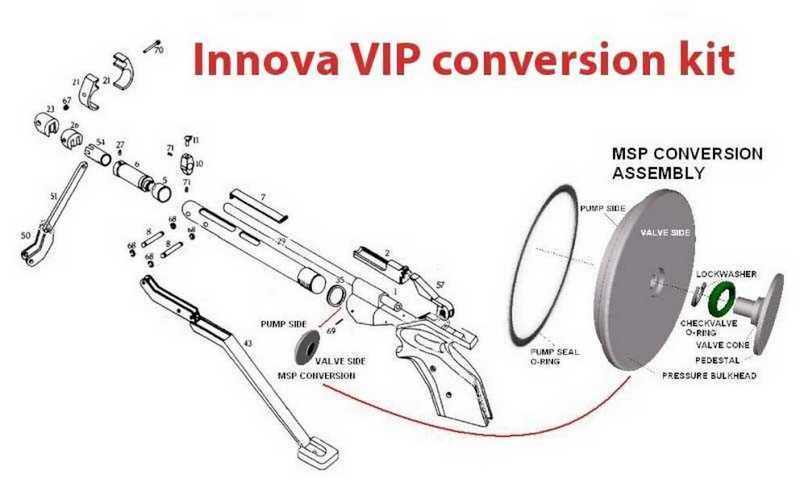