Today, we’ll test the velocity of the Hakim underlever air rifle. You’ll remember that this rifle was made by German maker Anschütz, using a sporting air rifle they were making as their starting point. They’d copied the 1948 BSA Airsporter. I happened to obtain a more modern BSA Airsporter last week at a gun show, and a review of that will be coming up some time in the future. But, today, we’re looking at the Hakim.

Trigger adjustment
Before I get to the velocity, though, I noticed that the 2-stage trigger in my rifle was breaking at more than 10 lbs. That’s too heavy, and the Hakim trigger is adjustable for pull weight, but the action has to be removed from the stock to make the adjustment. So, the first thing I did was take the action out of the stock.

The Hakim doesn’t come out of its stock as handily as most spring rifles. A lot more than just the normal 3 stock screws have to be removed. If I decide to clean and tune this rifle, I’ll show the disassembly in a future report. For now, let me tell you that it takes about three times as long to get a Hakim action out of its stock. 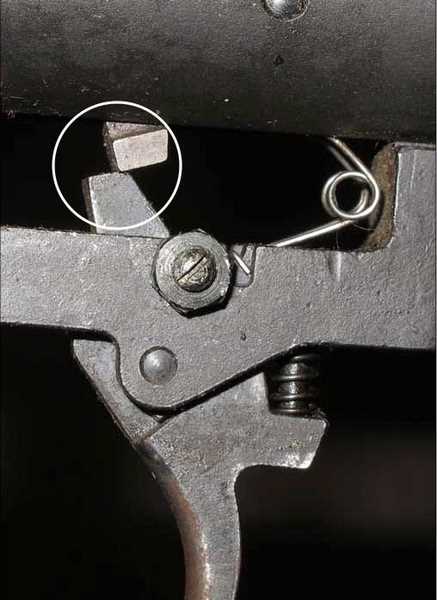 This is the Hakim air rifle trigger. The gun is cocked in this photo. The one adjustment controls the amount of sear contact area (parts in contact inside the circle). The screw is turned in to reduce the contact area, and the nut locks it in place.

I adjusted the sear to about half the contact area that was there previously, then I cleaned the contact surfaces and lubed both surfaces with moly grease. After all of this, and after breaking in the adjustment and the new lube, the trigger now breaks at just under 5 lbs. While I can get it down even lower, this is a trigger that uses sear contact area, and I would rather err on the side of safety more than I would like a light pull.

Cocking effort
It’s harder to measure the cocking effort of an underlever air rifle than to measure the effort of a breakbarrel, but it’s still possible. My bathroom scale says this rifle cocks with 18 lbs. of effort, which is pretty easy. The cocking linkage is designed to maximize the force you apply. Of course, the size and weight of the rifle prevents it from being used by young people, but this light cocking does make it enjoyable to shoot.

Best pellet
There’s one pellet I like in a Hakim above all others, and that’s the RWS Superpoint because they have the thinnest skirts I can find in .22 caliber — and in a taploader, you want a thin skirt. The tap has to be large enough for all pellets to fall into its chamber; yet, when the gun fires, you want the pellet skirt to flare out and seal the air behind it. The Superpoint does this better than any pellet I’ve ever found. I won’t stop looking, but until I find something better, the RWS Superpoint is the one pellet of choice for all my Hakims.

Velocity
I had no idea how this particular rifle was going to perform, so this test was a diagnostic one for me. The first pellet I tried was the 5.6mm Eley Wasp that’s now obsolete. I bought several tins of them years ago before they stopped making them, so I can use them in my Webley Senior, whose bore is quite large. They weigh 14.5 grains and resemble a Benjamin High Compression pellet from the 1960s.

Next up were the RWS Superpoints. They also weigh 14.5 grains — the same as the Wasps — but their average velocity was 498 f.p.s., which is an increase of 47 f.p.s. over the Wasps. That’s due to the thin skirt being more effective in a taploader, I believe. The velocity ranged from 489 to 509 f.p.s., which is a 20 f.p.s. spread. At the average velocity, Superpoints developed 7.99 foot-pounds of energy at the muzzle.

Performance?
These velocities place this particular Hakim at the upper side of average for this model. I’ve see enough of them to know what they should do, and this one is okay — but not spectacular. I’m satisfied with it where it is.

When I disassembled the rifle to adjust the trigger, I noticed that it’s quite dirty inside. It could benefit from a thorough cleaning of all parts, inside and out. Therefore, I believe I’ll at least disassemble and clean the rifle for you, and, yes, I’ll take pictures.

The buzz is disturbing, so I’ll look at ways of reducing it. If that slows down the rifle, I may need to tune it just a little to get it back to where it is now.

Oil
I oiled the rifle, to see what effect that might have. These taploaders do need more oil than conventional breakbarrels because the loading tap uses a film of oil to seal itself. To oil the rifle, I filled the tap with Crosman Pellgunoil and then cocked the rifle. The suction of air through the tap immediately sucked the oil into the compression chamber. After oiling, the velocity dropped by 100 f.p.s. for a couple shots, then climbed up to more than 50 f.p.s. above where it had been for around a dozen more shots. Then, it settled back to where it had been in the test. That tells me the tap was already oiled when I started the test. I was able to use Pellgunoil even though the Hakim does have a synthetic piston seal because the compression is so low.

The Arabic writing
I know that most of you have never see a Hakim up close, so I’m going to show you all the Arabic markings on the gun. There are no English characters anywhere. I don’t read Arabic, so I apologize if any of these characters are upside-down.

The rifle’s end cap has writing on both sides and on the top. Notice, also, that the cap has dovetail grooves. These can be used for short scopes, dot sights or peep sights.

The left side of the end cap. 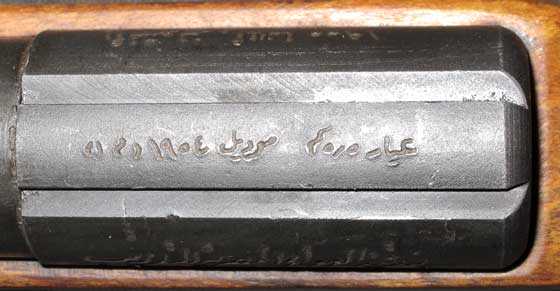 The top of the end cap. If you mount anything to these dovetails, take the arch in the center into account.

The right side of the end cap. 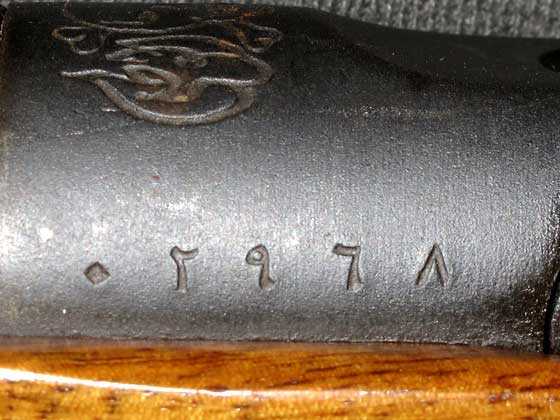 Left side of the gun, just forward of the tap lever.

The rear sight is also graduated in Arabic numerals, which are unreadable — despite what they told us in school. That doesn’t really matter because you can guesstimate where to put the elevation slider from the results on the target, but it does illustrate that there isn’t a word of English anywhere on the airgun.

Evaluation so far
When I bought this rifle, I did so based on the stock. It’s well-made, beautiful and uncharacteristic of a standard Hakim stock, and free from cracks.

I tested the action at the time of purchase, which, with a Hakim, is possible without firing the rifle. I won’t bother to explain right now the how and why of that because I doubt many people will ever need to do it, but I did know from my test that this rifle was probably going to be average as far as performance goes. And it is.

Next, I think I’ll move on to accuracy testing at 10 meters with the installed sights. After that, I’ll decide where to go for the next report.

Essentials of an outdoor range 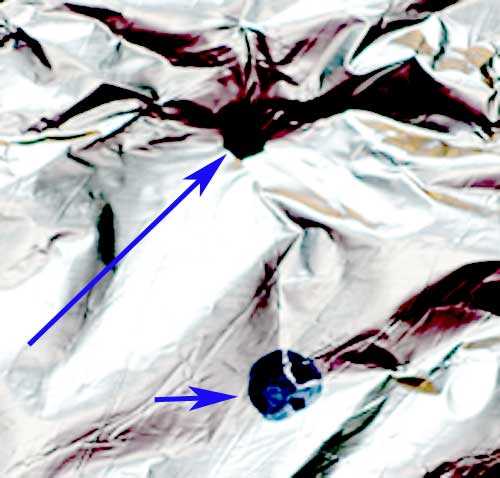