Today, we’ll begin looking at the accuracy of the Umarex Fuel air rifle. This rifle has good adjustable open sights, plus it comes with a 3-9x scope and mounts. But in the velocity test, the rifle’s muzzle slipped off the scale and broke off the muzzlebrake that contains the front sight. So, I can’t test it with open sights. Therefore, I mounted the scope and tested it at 10 meters with 3 different pellets.

A different kind of accuracy test
But that’s not all. Besides testing the Fuel using the artillery hold, I tested the rifle with the bipod rested on a hard surface and then on a soft surface to see if there’s any difference. I shot 5-shot groups because of all the testing I’m doing today.

When that testing was finished I tested the most accurate pellet with a 10-shot group. And, if the bipod were to shoot as well as the artillery hold, I would shoot a 10-shot group off the bipod. This will be a very different kind of accuracy test.

Scope setting never changed
For this entire test, I did not change the scope setting once the rifle was sighted-in. That gives us the opportunity to see how each method of resting the rifle affects where the shots go.

RWS Meisterkugeln pellets
The first pellet I tried was the Meisterkugeln Rifle pellet that Umarex sent with the rifle. I assumed they knew this was a good pellet for the Fuel. Six shots went into 1.148 inches at 10 meters. This should have been 5 shots, but I miscounted. 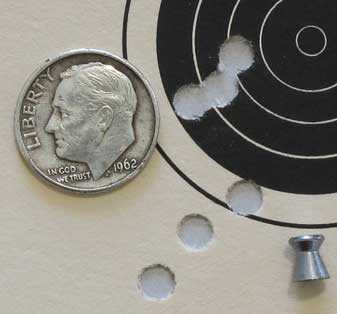 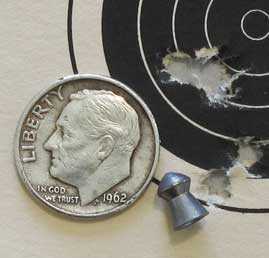 RWS Superdome pellets
The last pellet I tried was the RWS Superdome, which is often very accurate in spring guns. Five of them went into 0.507 inches — the tightest group so far. 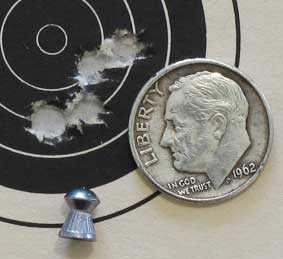 Five RWS Superdomes went into 0.507 inches at 10 meters with the artillery hold.

Bipod rested directly on the table
It was time to test the rifle rested on the bipod legs that are permanently attached to the stock. For this first test, I rested the legs directly on the table. I was wondering if this might cause problems with harmonics, and we’ll now see.

First, I shot the Meisterkugeln wadcutters. The scope setting remained the same as before, but this time 5 shots went into 0.662 inches — less than half the size of the group when the artillery hold was used. The group stayed pretty much where it was when the rifle was hand held. Interesting! 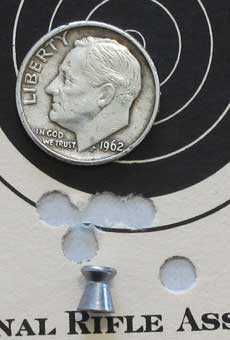 The bipod on a hard surface tightened the Meisterkugeln to 5 pellets in 0.662 inches.

Next, I shot 5 H&N Baracuda Match pellets. This time, 5 shots went into 0.648 inches. That’s larger than the hand-held group, and the pellets also landed lower on the target. 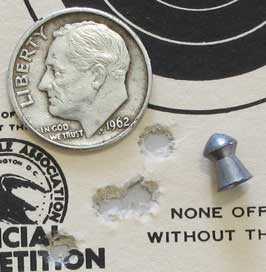 Five Baracuda Match off the bipod went into 0.648 inches at 10 meters.

Finally, I shot 5 RWS Superdomes off the bipod. This time, the group measured 0.659 inches between centers. Again, it landed lower than the hand-held group, and this time it was larger than before. 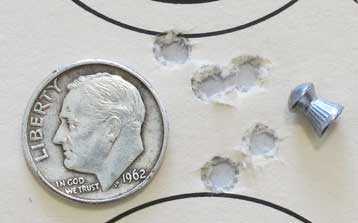 Five Superdomes off the bipod made this 0.659-inch group.

What can I say about the bipod? It seems to work well and may be worth using in the field. Two of the groups were larger, but one was smaller. That may just be because I haven’t shot enough groups yet.

Bipod rested on soft surface
It was time to test the rifle with the bipod resting on a soft surface — similar to resting it on the ground in many places. Same 3 pellets, same sight setting. For a soft surface, I used a heavy military wool blanket folded many times. It was about 3 inches thick and very dense and soft.

Meisterkugeln were first, and 5 went into a vertical group that measured 0.721 inches between centers. This is larger than the group shot with the bipod rested on a hard surface and smaller than when the artillery hold was used. 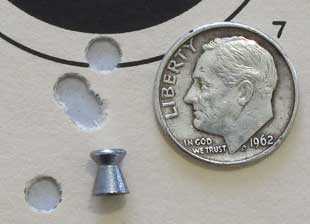 Off the bipod sitting on a soft rest, 5 Meisterkugeln went into this 0.721-inch group at 10 meters.

H&N Baracuda Match pellets went into 0.565 inches between centers. That makes this the best group shot with this pellet. 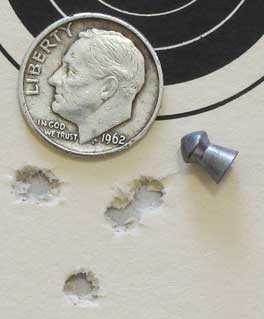 Five Baracuda Match went into this 0.565-inch group at 10 meters with the bipod resting on a soft surface. 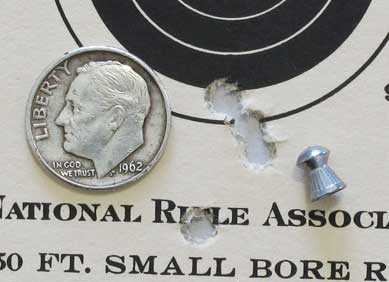 Five Superdomes went into 0.633 inches off a bipod sitting on a soft surface. Four of those went into 0.335 inches.

I felt the Superdomes had a slight edge on the Baracuda Match pellets, so I decided to shoot a 10-shot group of them with the rifle rested in the artillery hold. Ten pellets went into 0.74 inches at 10 meters. 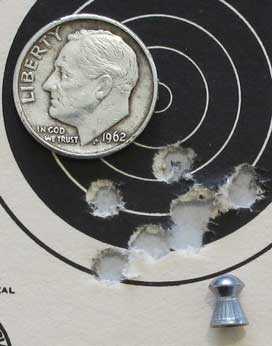 Using the conventional artillery hold, 10 Superdomes made this 0.74-inch group at 10 meters.

I shot 10 Superdomes with the bipod rested on a soft surface. They went into 1.012 inches, but within the main group 7 are in 0.365 inches. It’s this group that leads me to believe there might be a technique to using the bipod. I almost have it right, but not quite. 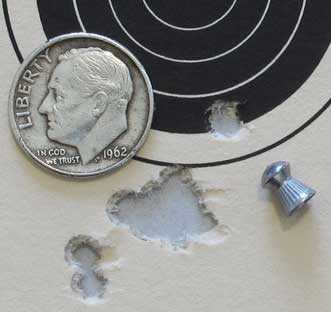 While the overall group is larger, at 1.012 inches for 10 shots, 7 of those shots went into just 0.365 inches at 10 meters when the bipod was rested on a soft surface.

Evaluation so far
The Fuel looks like it wants to shoot — especially from the bipod. I may not have the best pellet yet. When I back up to 25 yards, I’ll try both the Baracudas and the Superdomes.

Pyramyd Air job openings
Pyramyd Air is looking for an experienced java developer. If you’re interested, the requirements are listed on their website.

Are you an experienced airgunsmith or airgun tuner? If so, Pyramyd Air is looking for someone to join their tech support department. That job isn’t listed on the page I referenced above, but I was told that such a position is available. If you’re interested, please send your resume to the email address listed on the page I mentioned before. 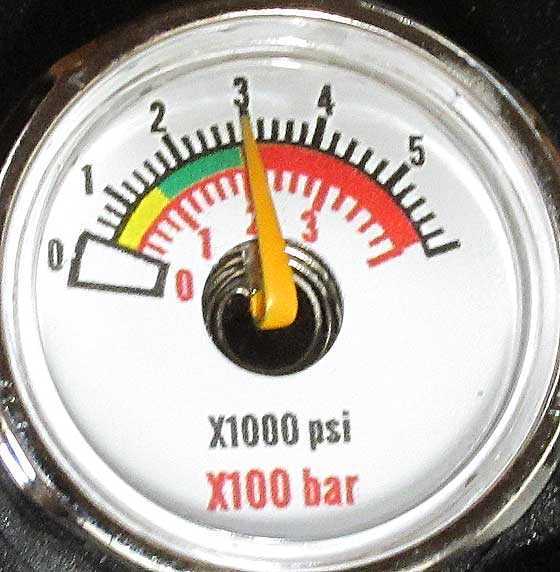