Today, we’re going to try something recommended by Gene Salvino in the tech department of Pyramyd Air. He told me that it’s possible to quiet the new Feinwerkbau Sport air rifle by means of externally applied lubrication. In other words, no disassembly is required. That would be a huge plus to those shooters who don’t want to disassemble their airguns.

Oil the rifle
Gene’s recommendation is to use gear oil — specifically 80-140 weight gear oil through the cocking slot. He said the mainsprings in several of the guns he’s seen are very dry. Gear oil seems to be just the ticket to calm them down and get the rifles shooting smoothly.

I removed the stock to get access to the cocking slot. Okay, that’s some disassembly, but that’s as far as we’re going. Feinwerkbau uses Torx screw heads for the 3 screws that have to be removed, and they’re all the same size. Once I found the right bit, it took less than 2 minutes to remove the 3 screws and separate the barreled action from the stock. 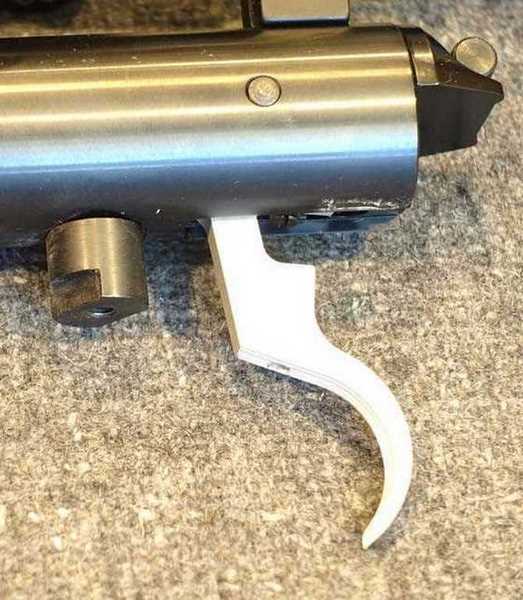 This looks so similar to the FWB 124. Anyone who has disassembled a 124 will know how to take apart this rifle — not that we need to! The large bolt in front of the trigger holds the action together and is also the anchor for the front triggerguard screw.

Some improvements over the 124
I see they used the general design of the FWB 124 but made improvements in many places. The first place I’ll point out is the pivot bolt. It has a Torx head that allows you to tighten the pivot just enough. You want the barrel to remain in position after the rifle has been cocked. That keeps the breech as tight as it needs to be. 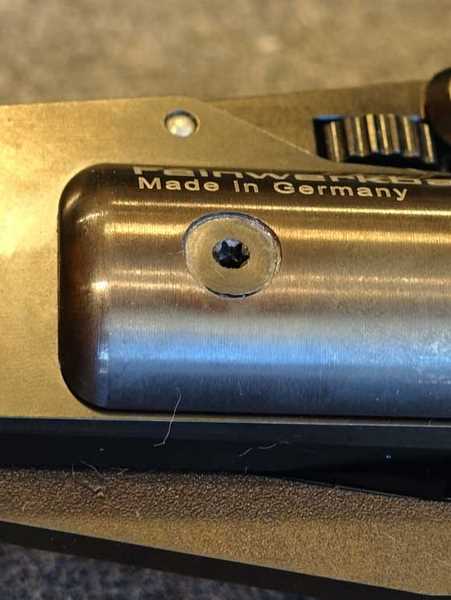 The pivot bolt also has a Torx head. You can control the amount of pivot tension very precisely. 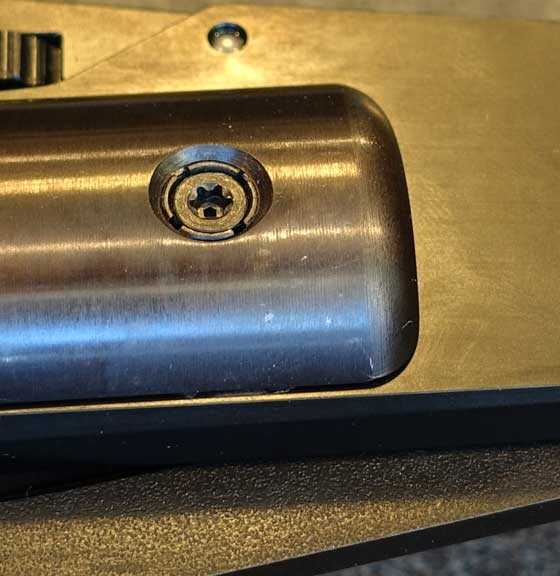 You can also see in the picture above that the trigger blade is metal. This is another improvement FWB has made. They learned their lesson with the 124. Even though the trigger blade has no strain on it and will not break, shooters hate plastic triggers.

The spring was dry!
As Gene predicted, the Sport’s mainspring was dry. The synthetic spring guide (another improvement over the 124, because this guide has less friction than the old steel one) was also very dry. I wiped the spring coils with a cotton swab, confirming there was a thin film of moly grease on them, but it isn’t enough to deaden vibration when there are any loose tolerances in the powerplant. And by loose, I means only a few thousandths of an inch! Moly is used only on the mainspring and guide when the parts fit so tight we say they’re “nailed” together (that means they must be forced together for assembly). The amount they used on this spring was too little to deaden any vibration. FWB needs to lube their powerplant more during assembly.

The rear of the piston was coated with moly grease, which is correct. I left it in place; but when I oiled the mainspring, I also put some oil on the back of the piston because Gene recommended it. 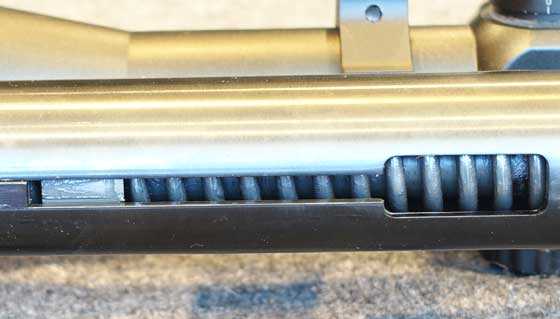 Rear of the piston is well-lubed with moly, but the mainspring is too dry. 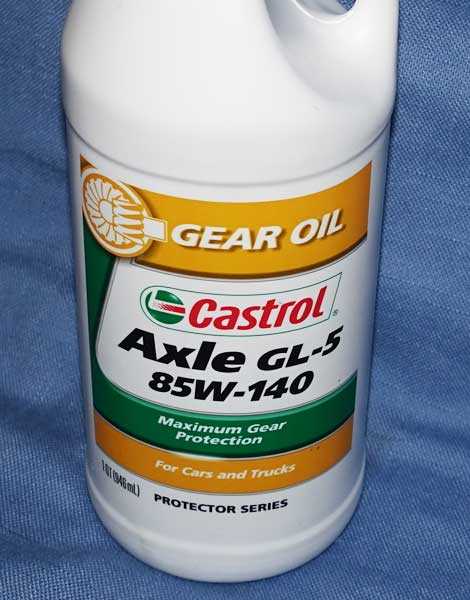 This is the gear oil I used — but as long as the lower viscosity number is 80 or more, it’ll work. 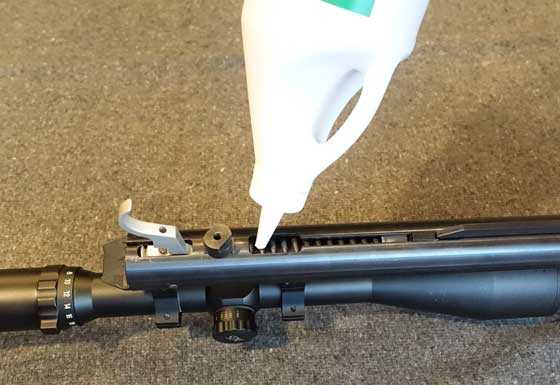 Oiling the mainspring. Don’t use too much!

I let the oil move around the mainspring for 5 minutes, then put the action back into the stock. Next, I cocked and fired the rifle. The cocking stroke was far smoother and quieter than it had been before the gear oil. But the pivot bolt tension is still bang-on, which means this Sport rifle is extremely well-made. Other guns loosen with shots and have to be corrected a lot, but this one is holding exactly where it was when I took it out of the box.

The shot cycle was now much smoother, but not entirely free from vibration. I shot it again several times, and it seemed to get smoother as I went. But it never got to the point of being vibration-free. Gene suggested putting more oil in the action, but I looked and there seemed to be enough in there already. Maybe it just needs to be shot more to spread the oil around.

Air Arms Falcon pellets
Before oiling, the Falcon dome from Air Arms averaged 932 f.p.s. with a spread of 9 f.p.s. After oiling the average was 928 f.p.s. and the spread was 20 f.p.s. Slight loss of velocity and stability with oiling.

Firing behavior after shooting
The rifle still has a small bit of buzz, but it’s only about 10 percent of what it was before oiling. I don’t think it’ll get any better with time. In my opinion, the oiling method does work; and for those who don’t want to disassemble the rifle, this is a good option. The excess oil does run out of the gun, so be sure it doesn’t drip onto furniture or the carpet.

In the future…
Pyramyd Air has granted me permission to open up this rifle for you and look inside. I may do that after the 50-yard test. And I will then look at other things that can be done to tune the rifle even better. 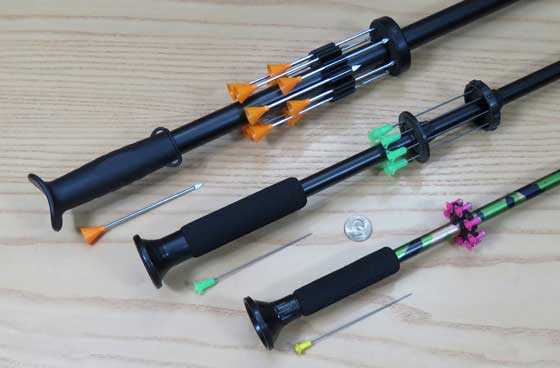 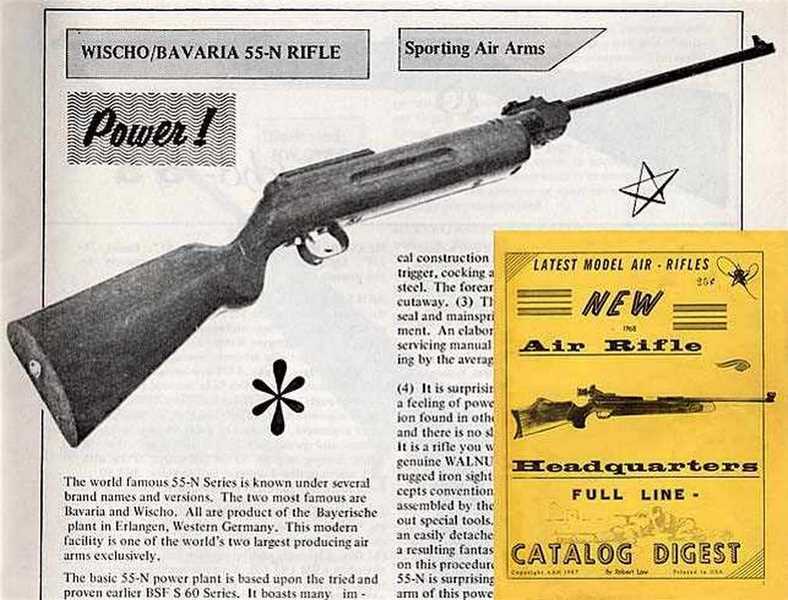