• Lookalikes are booming!
• Some history
• A closer look
• Much, much more!
• The future

Let’s take a look at the stunning new Webley Mark VI BB revolver that’s the talk of the airgun world! Even though this revolver just hit the U.S. market, I feel like I’m late to the party because airgunners around the world are already buzzing!

Lookalikes are booming!
It comes as no surprise that lookalike airguns are one of the hottest growth sectors of the market. Firearms are so restricted in many countries, and even here in the U.S. they’re nowhere near as easily accessible as they were just a few decades ago. People want to feel and hold the mechanisms that evoke images of battles past, and today’s realistic lookalike airguns make this very possible.

I remember back in the 1970s when the Crosman 38T and 38C revolvers were selling — we all thought things couldn’t get much better. And guns like Crosman’s M1 carbine BB gun or Daisy’s model 26 slide-action BB gun that was a near-perfect copy of Remington’s 572 Fieldmaster .22 were remarkable mimics of the real thing. They still are today! And I cannot overlook the gun that started it all, back in 1961 — Daisy’s 1894!

But the lookalike market grew dark until Umarex opened it again with their Walther CP88 at the end of the last century. The reception for some of their lookalike guns such as the Walther PPK/S BB pistol was strong; but others — such as the S&W 586 — languished with lukewarm sales. Of course, pricing was part of the problem. The PPK/S had blowback and cost under $50, while the gorgeous S&W 586 sold for over $180. I’m talking historical prices now — both pistols cost more today.

While all this was happening, I heard the insiders discussing what they should bring out next. The first model out of my mouth was the Colt Single Action Army, and we will see that one next year, but I never considered guns like the P08 or the M712 pistols.

Some history
The thought of someone creating a Webley Mark VI revolver never crossed my mind! Webley top-break revolvers are just as iconic as single actions in most parts of the world. Heck, Indiana Jones used one In The Last Crusade if memory serves, while his evil opponents were armed with period-correct Broomhandle Mausers! Just holding a .455-caliber Webley Mark VI puts me in mind of the last days of the British Empire and all the exotic places their soldiers were stationed. 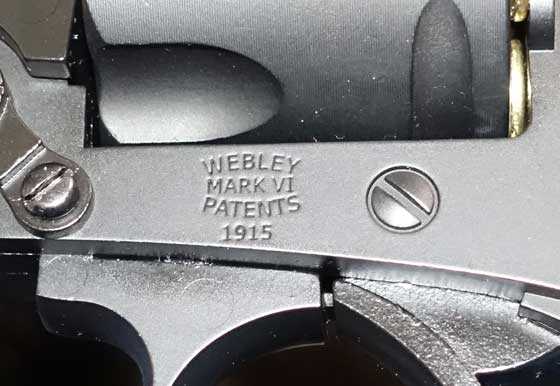 The BB pistol is marked just like the firearm. 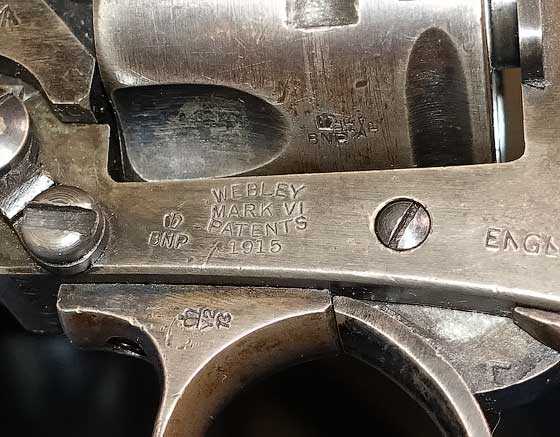 The firearm is just more worn. People love this kind of realism! 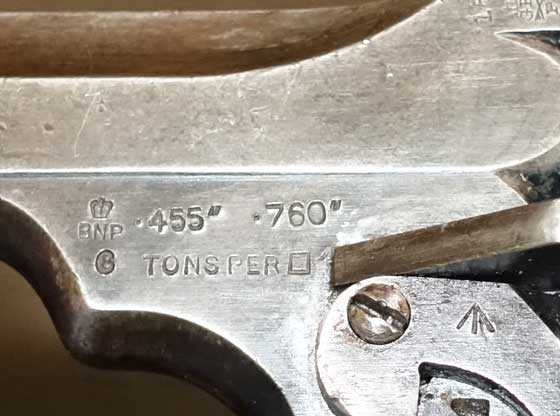 Of course, the firearm has lots of additional marks. The broad arrow on the right is the mark signifying military ownership.

The Mk VI, or Webley six, as it is also known, is a 6-shot double-action revolver chambered for the British .455 round. That round is a rimmed .45-caliber cartridge with a bullet diameter of 0.455 inches. How about that? Its 265-grain lead bullet travels at a slow 600 f.p.s. out the muzzle, but was rated in early trials as a manstopper that was superior to even the U.S. Army’s .45 A.C.P.

The Mark VI revolver was adopted in 1915, but it was the outgrowth of a progression of .455- and .476-caliber revolvers that had been evolving for close to half a century by that time. The recoil was considered low for the era, but it was still more than many new conscripts were able to tolerate, so the Brits phased it out in favor of a .38-caliber cartridge that was chambered in a series of Webley and Webley-esk revolvers.

I’ve never owned a Mark VI firearm, but a friend loaned me his father’s Mark VI when he learned of the BB pistol — just so I could make this report a little richer. I must say, holding the firearm is a historical day trip, and holding the BB revolver is very close to the same thing. 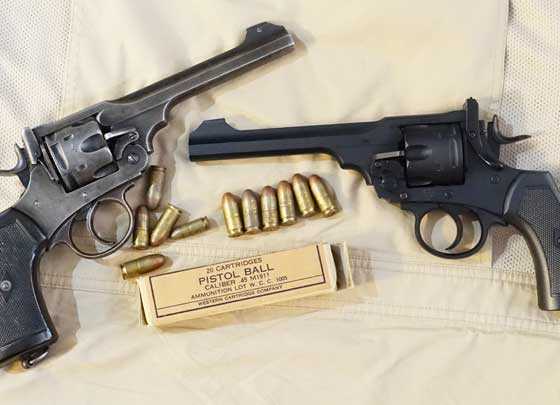 Only the deep, perfect finish reveals which revolver is the BB gun (right). This firearm is chambered for .45 ACP, which is a popular conversion for this model.

This gun uses brass lookalike cartridges to load the BBs. The cartridge consists of a brass case that has a gray plastic bullet replica when the lead bullet would be. One BB is pressed into the open nose of each simulated bullet, then the loaded cartridges are loaded singly into the revolver’s cylinder. To gain access to the cylinder, the revolver is broken open — not unlike a breakbarrel airgun, but without the effort. As the gun breaks open, the extractor rises, lifting all the cartridges from their chambers. 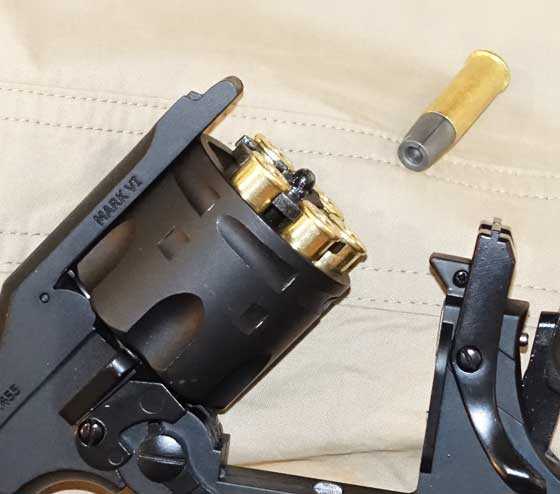 The cartridges are separate. A BB is pressed into the front of each one.

Soldiers were not concerned with their expended cartridges. So, when the revolver is broken open, the most common way of clearing the cylinder was to turn the revolver on its side and dump them out. For this reason, the Webley does not have an ejector — nor does it need one.

Of course, BB gunners do care about the cartridges because you’re going to reload them with BBs. So, you don’t dump them unless it’s onto a bed just to feel the historic effect of clearing the revolver rapidly. “Color Sergeant! Post a guard on that wall!”

This revolver is powered by CO2, and you know by now that the cartridge has to live inside the grip. The manufacturer advertises a velocity of 388 f.p.s., which I’ll test for you in Part 2. I’ll also give you the numbers for the trigger-pull in both single- and double-action in Part 2 — but I can tell you right now that this is one light, smooth revolver. You’re going to love shooting it! 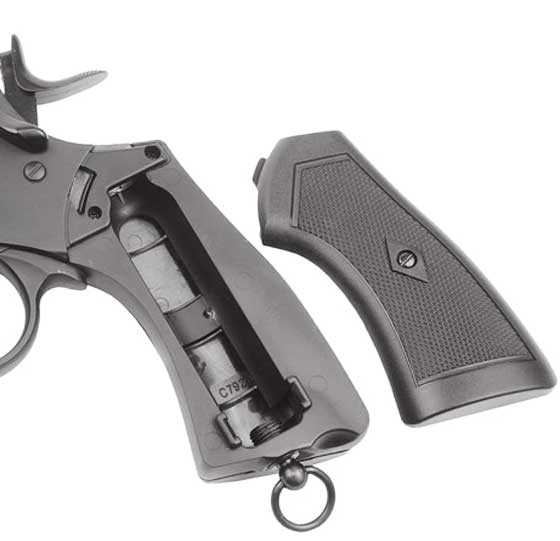 The CO2 cartridge hides inside the grip panels.

The sights are fixed, as are the sights on the military revolver. And the only real giveaway that this isn’t a firearm is the white lettering on the right side of the frame announcing the caliber, and a Freimark (legal to own as an airgun, based on power) for the German market. 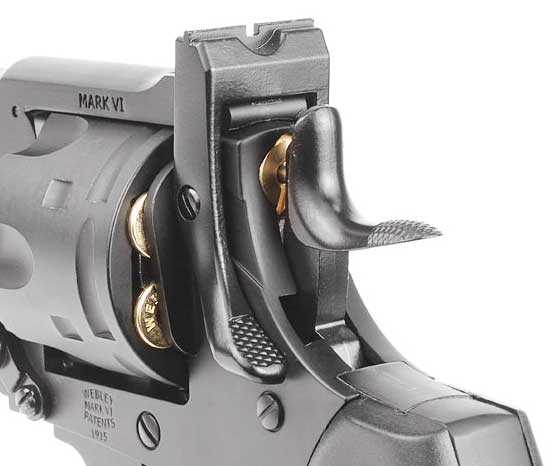 Rear sight is fixed (though it appears to move, it doesn’t). That large lever is pushed down to break open the revolver.

Well, there’s something else. It’s so small that I missed it on my first examination, which is exactly as it should be! In honor of Agatha Christie, this BB revolver has a working safety catch located on the right side of the frame. A red dot signifies the gun is ready to fire and a white dot tells you the safety is engaged. It can only be engaged when the gun is uncocked, and putting it on locks the action. 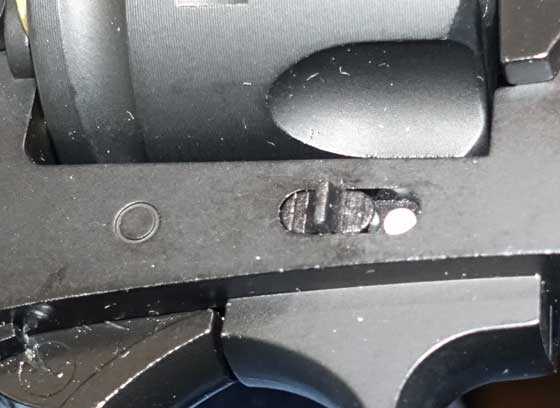 The safety is a small switch on the right side of the frame. When the white dot shows, the revolver cannot be cocked. The firearm has no safety.

Friends, this pistol even has a working lanyard loop! When the Mark VI was being issued, cavalry troops were still mounted on horses, and they used lanyards to connect their handguns to their bodies, lest they lose them (the handguns) in the heat of battle. The clever designers of this BB revolver turned the CO2 piercing screw into the base of the lanyard loop, where it looks perfect!

The makers knew exactly what their potential customers wanted, so in the package with the revolver and owner’s manual, they included a complete reprint of the Small Arms Training Pamphlet dated 1937. It includes the manual of arms for the revolver — including Inspection Arms, which is called “Draw pistols” in this manual. What a fascinating bit of history that shows how well the designers understood their customers. 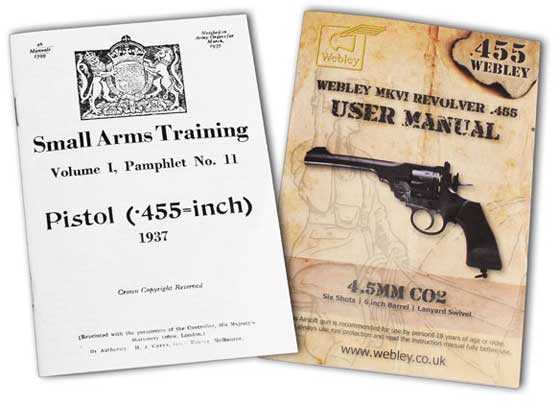 The military training pamphlet on the left is 20 pages long — reprinted from the 1937 publication.

I could go on, but I think you get it from the pictures I’ve included. The immediate acceptance of this lookalike BB gun is probably surprising retailers. They looked at the price of $200 (it’s 200 pounds in the UK!) and thought people might stay away. And maybe it won’t sell as well in the discount stores — but that turns out to be an advantage! Since it will only be available from dealers of quality airguns, there won’t be the cutthroat discount pricing that destroys all hope of sensible commerce.

There will be many who don’t see the need for a revolver like this, but there will be quite a few who will celebrate its arrival! With realistic airguns like this, can the rest of our dreams be far off?

My hopes for the future…
The world of lookalike airguns is in the early years of a golden age. Who wouldn’t like a realistic M1 Carbine? Or perhaps a Finnish Lahti L35 pistol? Few of us can spare the $3,000 for the 9mm Lahti, but the way is now open for a realistic blowback version that shoots BBs. And while we’re at it, what’s to prevent someone from making a realistic Remington Rolling Block rifle? Or an 1874 Sharps?