Today I start looking at the Aeon 8-32X50 AO scope with trajectory reticle. We actually began our look in the final section of the BSA Supersport SE review, which is why there’s a link to Part 4 of that review at the top of this page.

For starters, I said this is the shortest 8-32x scope I’ve ever seen. I showed you a picture of the scope mounted on the BSA rifle, but the only comments that picture got were about the Diana Bullseye ZR recoil-reducing scope mount. Apparently not many of you own an 8-32X scope; and so when you see one that’s several inches shorter, it doesn’t make much of an impression. So, the first thing I’ll do today is show you the Aeon scope next to a UTG 8-32X (no longer made), so you can appreciate what I’m saying. The Aeon is 13.75 inches long, compared to 17.52 inches for the UTG.

The Aeon scope is on top. The UTG 8-32X50 is below. The UTG represents the size of most 8-32X scopes. Now you see what I mean when I say this Aeon scope is compact for its power.

The Aeon scope is small, but is it also a good, clear scope? It costs a little less than an equivalent UTG, but the prices are fairly close. People shouldn’t buy it just because it’s short, regardless of the other features. I used this with the BSA Supersport SE I tested yesterday, and I learned a lot from that first experience.

I asked for the trajectory reticle because I wanted to see what airgun applications it had. The point of a trajectory reticle is that the intersections of the crosshairs allow the shooter multiple aim points for different engagement ranges.

Trajectory reticles seem like a wonderful idea until you acknowledge that none of them — and I mean absolutely none — not even the ones in $5,000 sniper scopes that are made for specific 5.56 sniper ammunition — work right out of the box. All of them require the shooter to create a logbook of data on how that specific reticle performs on their specific rifle using one specific round of ammunition. Snipers and varmint hunters understand this. The general public does not. They believe that the crosshairs on the scope’s reticle somehow magically are all in the right places for the ammo they’ll be shooting — once the scope is sighted-in.

This is not a condemnation of the trajectory reticle! It’s just an advisory that the reticle is only the starting point. More work has to be done before you can begin to use all the features of this intricate reticle. 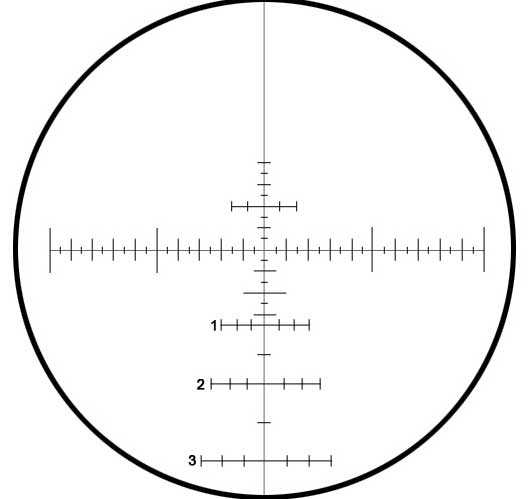 This is the trajectory reticle. It’s very busy! The lines are super thin for precision aiming.

I’m testing the scope with the trajectory reticle, so that’s all I can report on. The reticle lines are very thin, which I like in a scope that’s meant for shooting paper targets and small varmints at long ranges on sunny days. When the reticle lines are thin, I can see them sharp enough at 100 yards to gain an extra quarter-inch of aiming precision — or at least that’s what I believe.

When I shoot groups off a bench, I typically shoot at a hollow box target at 100 yards and 200 yards. A thin reticle line allows me to bisect that square very precisely. The closer I can get the intersection of the crosshairs to the same place on the target for every shot, the more consistent my aim. When the goal is to make the smallest groups possible, every advantage must be taken. 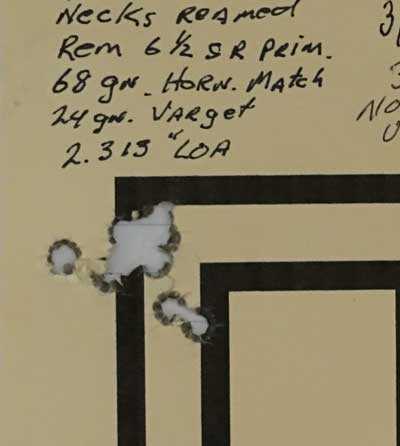 My targets for shooting my AR-15 at 100 and 200 yards are hollow boxes like this. A thin reticle gives a lot of precision on this target.

BUT — and this is an important but — for almost all other shooting situations, a very thin reticle line is more difficult to see than one that’s bolder, and is, therefore, less precise than it could be. I think I encountered that yesterday in the SE test because I lost the reticle several times. I didn’t shoot until I could see it clearly against the bull; but with the concentration required for the optimum artillery hold, this was one additional frustration I didn’t need.

Buy this trajectory reticle for targets, only

My point is that the trajectory reticle is great for targets. When you have the time to pick out the thin reticle lines against the target, this reticle gives you all the precision you want. For general applications, this is not the reticle I would choose.

That’s enough about the reticle. What about the rest of the scope? Is this a scope to buy? Well, I want to test it more under different circumstances, but I’ll tell you what I see so far.

First, I mentioned that the point of impact seemed to shift when I changed the power from 8X to 14X. But, was that shift real or just imagined? I don’t think it was real, because look at how open that group was, and the very next group with the same pellet was tight. I think that big 2-center group was caused by the nut behind the trigger. 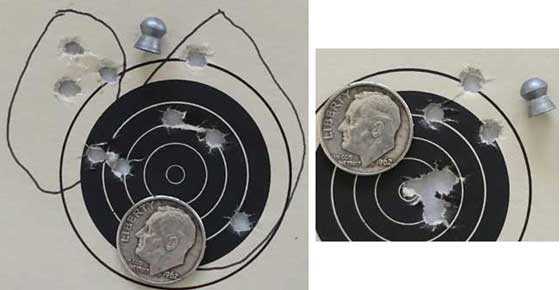 The target on the left shows 2 points of impact that might have been caused when the scope’s power was changed. I believe they’re due to the shooter, not the scope. That’s because the group on the right was shot with the same pellet and looks much tighter.

I do think I need to test this to find out for sure. Because if the scope was the cause, then there’s a serious problem. But I don’t think there was. I will test it by mounting the scope on an air rifle of known accuracy that also has no recoil — and no special scope mounts. I’m thinking of using my Talon SS after I complete its 50-yard test against the 10/22.

Next, I have to tell you that as the power of this scope is increased, the viewed image grows darker. I began to notice this above 20X, and it becomes pronounced above 24X. At 32X, the target has to be lit brightly to see the reticle at all. Fortunately, I had a 500-watt lamp illuminating the target so I could see what I was doing, but there’s no way that you’ll be able to use this scope in the deep woods above about  24X.

Don’t despair. This darkening of the image as the magnification increases is common to all powerful scopes — not just this Aeon. My Tasco Custom Shop 8-40X scope is unusable on bright days above 30X. And that scope cost over $600 in the late 1990s! This is where the 30mm scope tube comes into play and also where the 50mm objective lens helps. Larger lenses pass more light. Also, the lens coatings can help or hinder the situation.

The point is, when you buy a scope this powerful — and that’s almost any scope — you can bank on the top 20-25 percent of the power range being usable under only a few situations where the light is perfect. Maybe the hugely expensive Swarovskis and Schmidt and Bender scopes are better in this respect — I just haven’t got several thousand dollars to find out.

I find this scope to require a very careful placement of the head and sighting eye to see the full image. Go closer or farther away from the ocular lens, and the image gets smaller pretty quickly. Move your head to one side or the other, and the image goes dark just as quick. I find this is true on the best optics, so it isn’t a flaw — but it’s something a buyer needs to know.

On 32X, the image did blur with every shot. That was the rifle’s moderate recoil and vibration moving the parallax focus ever so slightly. It probably happened on 8X and 14X, as well, but the image was so small I couldn’t see the blur. Now, this is a decision point. I own some UTG 8-32X scopes that don’t blur under moderate recoil. So, there’s something to think about.

And, lest we forget, the scope mount I’m using is supposed to take away the impact of recoil. So, perhaps, that’s where we should look with greater scrutiny. I certainly will!

Do scopes need to be broken-in?

This question was asked yesterday by blog reader RDNA. The answer is No. The kind of scopes we use today do not need to be broken-in. In the past, externally adjustable scopes made by Unertl, Lyman and others had anti-recoil features built into their mounts. Those features had to be adjusted to suit the rifles they were mounted on. While that isn’t a break-in procedure, it is something that had to be done to get the scope working its best. But today’s scopes don’t have such features, and no break-in is required.

I’m pointing out everything in this report, and you probably think that I don’t like this Aeon scope, but that’s incorrect. In fact, I like it a lot. The image is reasonably clear and bright on magnifications below 24. I especially like the fact that it’s so small for the power it offers. It does have some shortcomings that I’ve noted, but they’re shortcomings I can live with. Mounted on the right airguns with the right reticle and used the right way, I think this might be a very good scope to consider.

I’m not done with my test. I do want to return and test the tendency for impact shift when the power is changed, and perhaps to pit the results of this scope against those of a UTG scope for overall performance at 50 yards. So that is yet to come.