This report tested the relative accuracy of an AirForce Talon SS against a Ruger 10/22 rimfire. I went to the range several times to shoot all the 10-shot groups I needed, so it took some time to get to today’s report.

I had a preconception of how accurate a Ruger 10/22 was, and I knew very well how accurate an AirForce Talon SS was. I figured the Ruger didn’t stand a chance against the air rifle. If I’d used any of the standard Ruger 10/22s I have shot up to this point, things would have worked out as I expected.

But the rifle I used in this test was chosen because it surprised me with its accuracy. I got it in trade at a gun show and was surprised when I saw how well it shot. In fact, it was the accuracy of this rifle that inspired this test to begin with. I have owned a number of 10/22s and shot many others; but until this rifle came along, I’d never seen a standard Ruger right out of the box that shot this well.

The Ruger 10/22 Sporter is surprisingly accurate.

I’ve also owned a 10/22 Target, which is Ruger’s best attempt at making an accurate rifle right out of the box. That one was very accurate and had a better trigger than the rifle I’m using in this test — 4.40 lbs. against 6+ lbs. for the Sporter. But even that rifle was not as accurate as this stock Ruger Sporter. The best 50-yard 10-shot group fired with the 10/22 Target with 8 different brands of ammo — each shot 3 times for record (240 shots in all) — was 0.608 inches between centers.

My 10/22 Target was an accurate rifle, but not as accurate as this Sporter.

I even own a highly customized 10/22 that has been worked on in many ways and has a custom bull barrel. Over $800 in upgrades has been spent on this rifle, yet not even it can do as good as what I’m about to show you. The Talon SS probably could not have been challenged by a more worthy opponent than this Ruger Sporter!

My customized 10/22 above and the standard carbine below. Even when $800+ was poured into the Ruger, it still couldn’t perform as well as the standard Sporter!

Johnny Hill of Tin Starr Bullets told me the reason my Ruger is so accurate is because it doesn’t have a barrel band like you find on a Ruger 10/22 carbine. Several blog readers mentioned that in the comments to Part 1. I read those comments, but it didn’t register. But, boy, it does now!

My Talon SS is the same one I’ve owned since the beginning of 2001. I installed a 24-inch optional .22-caliber barrel on the SS, and I have an aftermarket bloop tube silencer (frame extender — mounted to quiet the report). Besides that, the gun is stock. Stock, as in 14 years old and still using all the same parts that came with it. Though I know how to rebuild this air rifle, I’ve never been inside this one — neither inside the trigger nor inside the powerplant or valve.

My Talon SS is stock, except for the 24-inch barrel and frame extender that muffles the sound.

The longer barrel lets me dial back the power and still get great velocity. That means I get more shots per fill, which is my goal.

The test
For this test, I shot each rifle 10 times at 50 yards. I used the most accurate pellet I know for my SS, which is the JSB Exact Jumbo that weighs 15.89 grains, and I used the CCI Standard Speed long rifle cartridge in the Ruger. Each gun fired ten 10-shot groups at 50 yards. All shooting was done from a rest on windless days when conditions were absolutely ideal. 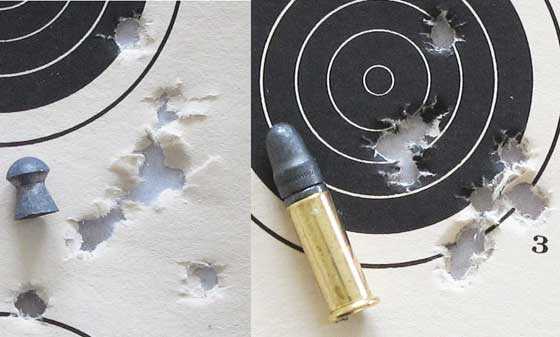 The Ruger was more consistent (shot smaller groups) than the Talon SS in this test. The SS had two very large groups that were 0.326 inches and 0.296 inches greater than one inch in size, while the Ruger’s largest group was only 0.107 inches over one inch. That was where the air rifle lost most of its ground.

Can I explain why the SS shot those 2 large groups? One reason might be because the pressure was falling in the reservoir. I shot 3 groups per fill on power setting 8, which should give me 40 good shots. Because of that, I felt safe shooting only 30 shots per fill.

Even though all shots were fired in the range that was considered safe, at some point in the power curve, things might be less stable than they are at other points of the curve.

Consistency is what I was testing in both rifles, along with accuracy. At the same time the SS reservoir pressure was dropping, I was also testing the consistency of the CCI ammo in the Ruger.

I’m surprised by these results. Not that the SS did poorly, because I don’t think it did. You shoot ten 10-shot 50-yard groups with a PCP and see what you wind up with!

I didn’t pick and choose which groups to show you — these are10 groups from both rifles, just as they were shot.

I’m surprised by the consistency of this particular Ruger 10/22. I know the 10/22 is a very popular firearm — one that I’ve tested extensively for other articles. But this particular rifle is performing beyond my expectations for all 10/22s.

To be fair, I’ll include the CCI ammunition in my statement of surprise. The CCI ammo is almost as consistent as the best target ammunition. I’ve tested CCI ammo in 10/22s for years, and this is the first time I’ve gotten results this good.

What you can do with this report is pit your own 10/22 against mine and see what happens. Or pit your best PCP against what I’ve done with the Talon SS and see how well you can do.

I doubt there are that many box-standard Ruger 10/22s that can equal this one, but I know for a fact that each and every Talon SS that comes out of the AirForce factory can do what you see here. I tested them extensively during the 3 years that I worked there; and in all that time, I found only one barrel (from thousands) that wasn’t this accurate. And that problem was fixed in 5 minutes with a barrel change!

A goldmine of data!

What I now have is a good baseline on this particular Talon SS. I can use that in other tests. For example, I can shoot several 10-shot groups with my SS mounted with an Aeon scope at 32x, and several more 10-shot groups — shooting half the shots at 8x and the other half at 14x. That will reveal if there really is scope shift as the scope’s power is changed — the way it seemed in Part 4 of the BSA Supersport SE report.

I also have an idea of how to test the Bullseye ZR scope mount used in the same article. But I’ll save the particulars of that test design until I think about it some more.

A test like this one takes a lot of time to conduct and even more to compile and write. I probably have 16 total hours invested in today’s blog. They’re good hours, though, because they’ve advanced our understanding of a number of things we often take for granted. That’s the most valuable result a test like this can produce. 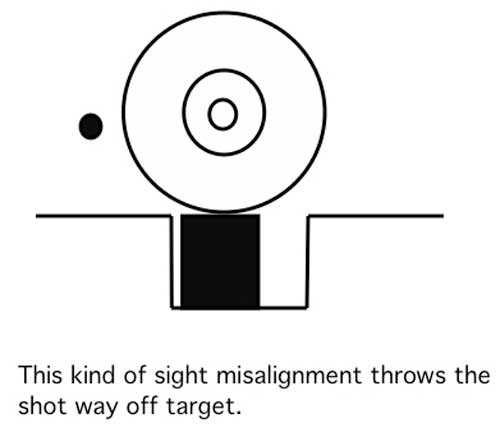 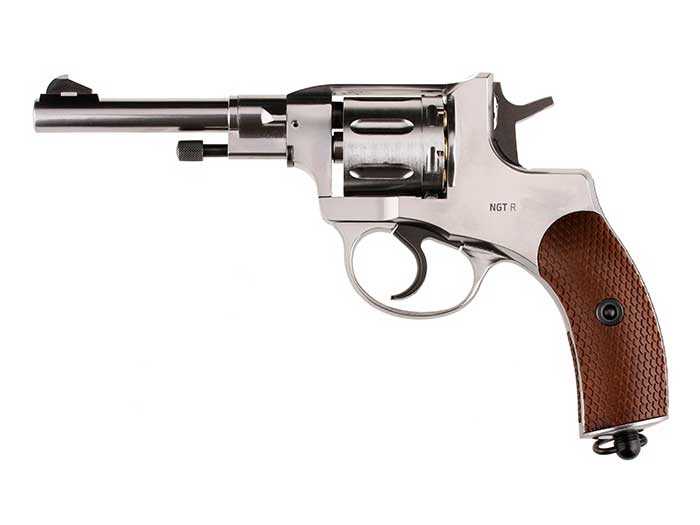