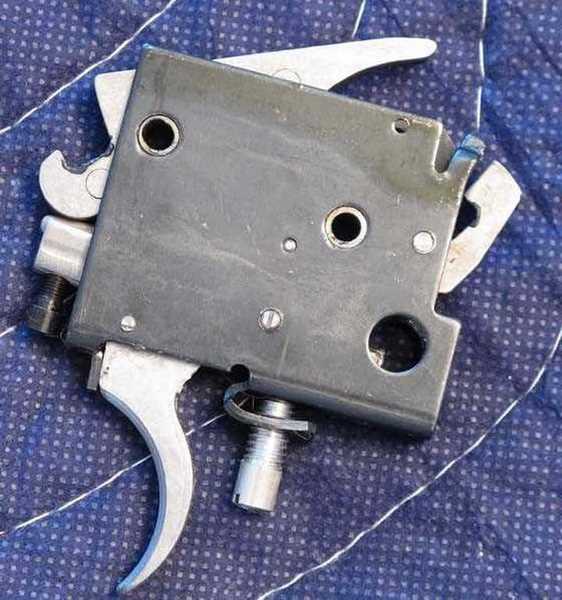 Today, we’ll look inside the HW 35 Luxus to see what we find. I’ve thought from the beginning that this is a tuned air rifle, and I’ve given you the clues why. The baseblock is lubricated with some heavy grease that Weihrauch never used, and the safety seems to be defeated.

I also want to find out what material the piston seal is made of. If it’s leather, it needs more frequent lubrication than a synthetic seal would need.

Disassembling most Weihrauch air rifles is easy. Only the R9/HW95 and the new HW50 have those 4 tabs that hold the very thin end cap in the rifle and are a little harder to deal with. But this HW 35 is an old-school Weihrauch that has a threaded end cap.

I loosened three screws, and the barreled action came out of the stock. And I immediately know that my rifle has been tuned. I can see black tar on the mainspring — something only a tuner would ever put there.

The Rekord trigger comes out first after driving out the 2 pins that hold it inside the end cap. Once it’s out, there’s more evidence of a tune — there’s moly grease on the sear hook that grabs and holds the piston when the rifle is cocked. The other end of the sear, which is blocked by the trigger, is also coated with moly.

The Rekord trigger looks normal from the side.

But this Rekord trigger is different than others I’ve seen. The piston hook is made from three thin steel plates sandwiched together — very much in the same way that BSF made their triggers. 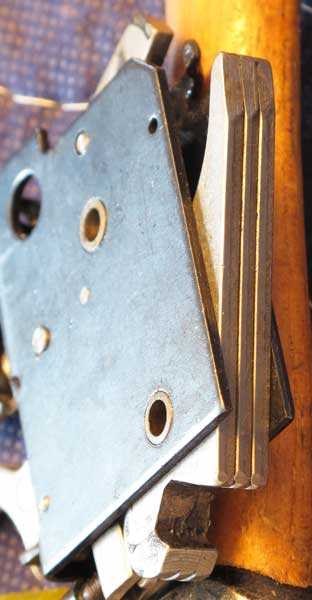 This view of the trigger shows three steel plates sandwiched together to form the piston hook. In later Weihrauchs, this part was made from a single piece of steel.

Mainspring and guide come out

Once the end cap is off, the mainspring and spring guide can be pulled out of the spring tube. I was wearing gloves because this mainspring is heavily coated inside and out with an extremely tacky black tar. I wish I knew what this stuff is, because it very much resembles the stuff Ivan Hancock used to put on the Mag 80 Laza springs for his special tuning kit. It’s thicker and tackier than any material I’ve been able to find.

When I tugged on the Weihrauch factory spring guide, it didn’t move. I think the mainspring fits the guide very tightly, but that black tar grease is certainly helping. I handled these parts very carefully, because I didn’t want too much of that stuff to rub off. I didn’t have anything as nice to replace it.

The mainspring is coated with a special black tar grease inside and out. The factory spring guide fits the spring very tight.

The spring is straight. It looks good to go for the next 10,000 shots at least. 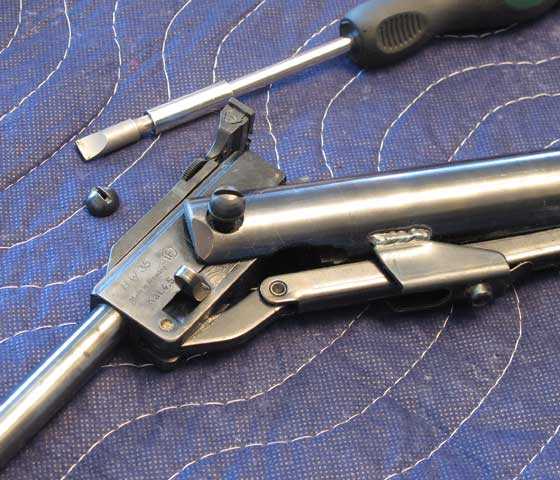 When I did this, I noticed that the baseblock and pivot bolt were coated with the same black tar that was on the mainspring. Either this tuner knows something I don’t, or he’s using the black tar like a hammer and sees every part of the airgun as a nail. What I mean is that you don’t use black tar to lubricate metal-to-metal parts, though that’s the original purpose of the product. I use moly on these parts because it lubricates better and lasts longer.

I also note that he used moly on the front and back of the piston, which is exactly correct. So, maybe he knows something I don’t.

The piston seal is leather, which is what I’d hoped. It appears to be in perfect condition and should outlast me if I keep it well-oiled. 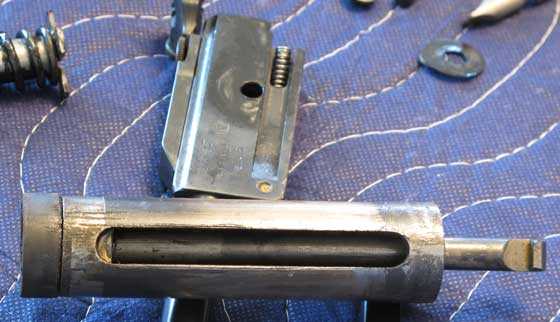 The piston is coated with moly front and rear — exactly as it should be. 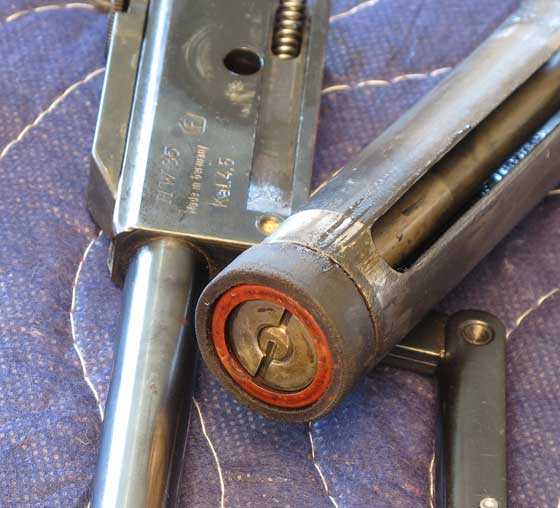 Following this examination of all the parts, I put the rifle together, again. I lubricated the pivot bolt and both sides of the baseblock with moly, but I didn’t bother removing the black tar grease. I figured the former tuner might have been onto something.

As I put the nut back on the pivot bolt, I noticed another anachronism. The lockwasher for the nut is a split wire washer instead of a conventional flat lockwasher. Weihrauch was still using conventional flat lockwashers in 1994, when I purchased the R1 about which I wrote the book, so this 1979 HW 35 should certainly have one. This is another clue that someone has been inside the rifle, because they used parts that weren’t around when the gun was new. 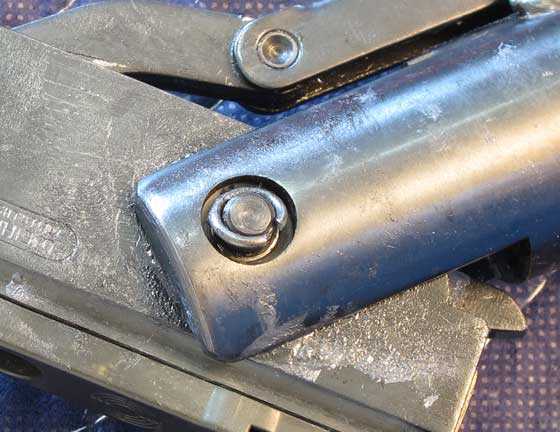 As you recall, I mentioned that I would like to return the safety to functioning status when I took the rifle apart. I examined it and saw that there’s no spring to operate the pin. Also, the pin appears to be crimped in place on close examination. 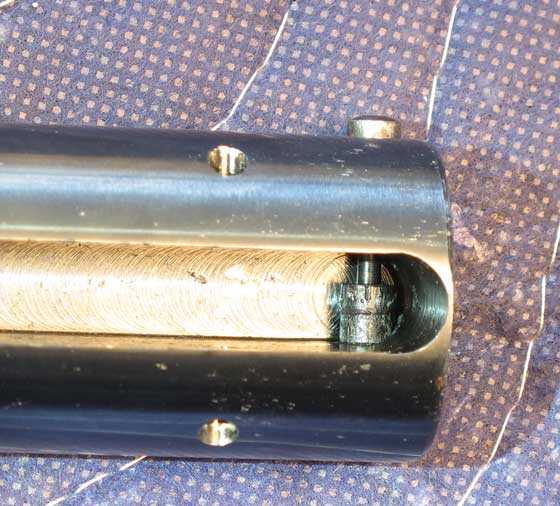 Looking into the trigger slot in the end cap, the safety pin has no return spring. It also looks to be lightly crimped in place.

I decided to leave the safety the way it is for now. I don’t have any experience with this version of Weihrauch safety and would rather understand it better before I do anything.

I put the rifle back together and noted that the whole job took about one hour, start to finish. That included time for photography. Weihrauchs are so straightforward!

After the rifle was back in the stock, I oiled the piston seal with about 10 drops of silicone oil through the air transfer port. I then uncocked it, which you can do with this model because there’s no anti-beartrap device. I let it stand on its butt for an hour before I cocked and loaded it with one pellet. I fired it, just to see if the action was still as smooth and calm as before. A little oil came out the muzzle; but the next morning, another shot produced no more oil. The seal is now saturated.

Next, I guess I’ll mount a scope on the rifle and shoot it at 25 yards again. Several readers asked me to do this.

This rifle is a big drooper. You can actually see the angle of the barrel relative to the spring tube, so I’ll have to mount something to compensate for that. 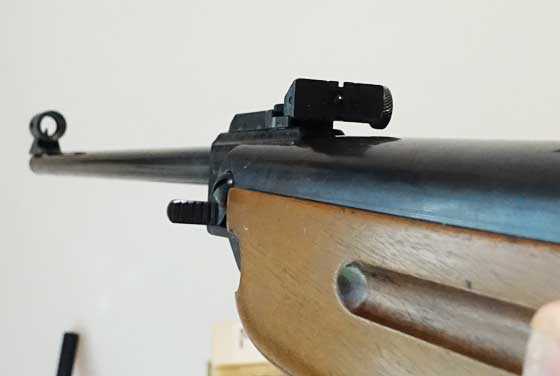 When the barrel droop is this visible, it’s going to be excessive.

When I get things set up, I’ll run the accuracy test with a scope.