Today, we’ll look at the accuracy of my HW35 Luxus. I’m shooting from a rest at 25 yards, and the gun lies directly on the sandbag. I tried holding it with the artillery hold, and it made no difference in group size.

I tested the Rekord trigger before starting and found it was releasing at 2 lbs., 9 oz. That’s a bit too heavy for a Rekord, so I backed out the aluminum trigger adjustment screw as far as it would go and learned something valuable. On the lightest adjustment, the stage-two release of this trigger is just 14 oz. That’s too light for a sporting rifle. It’s almost like a match Rekord that has a lighter return spring. So, I tightened the screw until the release was exactly 1 lb., 8 oz. That feels both safe and right. 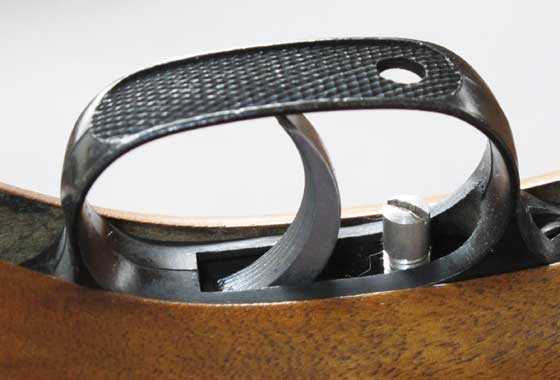 I’m pretty sure someone has been inside this rifle, because sporting Rekord triggers do not adjust this light. They’ll lighten up, but they aren’t supposed to get lighter than about a pound. Once the trigger was adjusted, I started the test.

I fired 150 shots in this test, not counting sighters. I did that over a period of 2 days. I will not show all the groups — just the ones that illustrate the points I want to make.

On the first day, there were a large number of very mediocre groups. The worst one was 10 RWS Superdomes that went into 2.153 inches at 25 yards. That was shot with the rifle resting on the bag, so I immediately shot 5 more at another target using the artillery hold. Those 5 went into 1.24 inches, which told me that Superdomes were not the right pellets for this rifle and also that there’s no significant difference with this rifle between the artillery hold and bag-rested. Had I completed that group with 5 more shots, it probably would have opened to about 1.80 inches, and I want better than that. 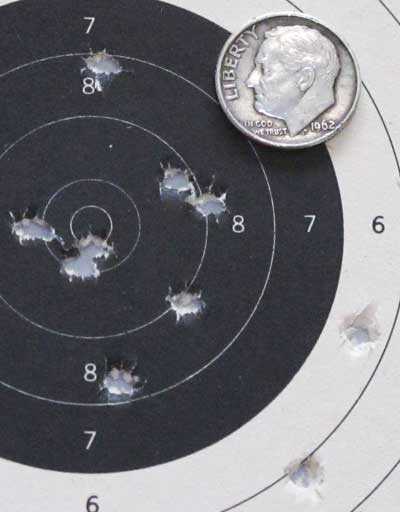 Ten RWS Superdomes made this 2.153-inch group at 25 yards on day one. This is the largest group of the session.

A reader had mentioned that his HW35 shoots the Qiang Yuan Training pellets pretty well, so I tried them and got a 0.986-inch ten-shot group. That was the best group of the first day; though, on another target, I did put 8 out of 10 H&N Baracuda Match pellets with 4.52mm heads into 0.947 inches 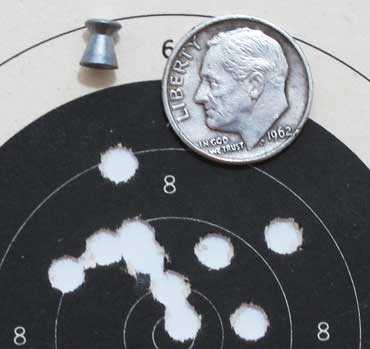 At the end of day one, with seven 10-shot groups in hand and none of them outstanding, I was starting to doubt myself. Several things went through my mind.

• Am I getting too old to shoot with open sights?
• Have I found the best pellet?
• Does the barrel need cleaning?
• Are the sights causing me problems?
• Should I mount a scope?
• Should I mount target sights?
• Is this rifle not that accurate?
• Is there something I should do to the rifle?

I list these things in case this sort of thing sometimes happens to you. You’re faced with an impossible situation, and you don’t know what you don’t know. The rifle you’re testing should be accurate, but it doesn’t seem to respond to anything.

An evening of thought and reflection on what I’d done on day one led me to some conclusions. First, the sights that came on the rifle were not the best. They were a German Perlkorn (tapered) front post and a shallow vee rear notch. 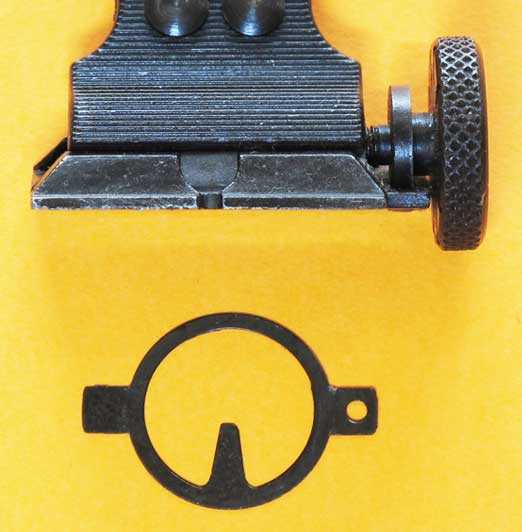 The front sight tapered post (Perlkorn) is too pointed, and the rear notch on the Weihrauch sight is too shallow.

I felt the front sight tapered too sharp for good aiming at bullseye targets, and the rear notch was too shallow. Unfortunately, this Weihrauch rear sight does not have different notches. But a Diana rear sight from the same period (1970s/80s) came with 4 different notches, and that rear sight unit fits the HW35 like it was made for it.

I could have just mounted a Weihrauch rear target sight on the rifle and used a target aperture insert in the front, but I didn’t want to do that. I already have an HW55 SF that has target sights, and I didn’t want another target rifle that was so similar (Rekord trigger, breakbarrel, easy cocking, etc.). Maybe I’ll do it one day out of curiosity, but for now I want my 35 to remain as a sporting rifle.

I also could have mounted a scope. This 35 gives every indication of being a tackdriver that only a scope can bring out. But I already have a Beeman R8 Tyrolean that’s tuned to perfection. This gun would be too similar to that one if I scoped it. I wanted this rifle to keep its sporting sights, so it would be a different kind of breakbarrel springer in my collection. Also, this HW35 is a world-class drooper. Any scope would have to be mounted on stilts on the rear ring to compensate, and I didn’t want that.

I ended up mounting a Diana rear sight with a square notch selected. Up front, I swapped the sharp Perlkorn for one with a broader, more rounded tip. The result is a sporting sight that’s easy to acquire, yet can also be precise. It’s almost like having a square post in front.

Then, I checked the stock screws. They were all loose. I tightened them and noticed that, while the groups didn’t seem to get smaller, the rifle became even smoother when it fired — something I wouldn’t have thought possible.

The barrel pivot bolt was loose enough that the barrel would not remain in any position I placed it in once the rifle had been cocked. So, I tightened the pivot bolt and then the nut. Weihrauchs with European stocks are so good about this, because the pivot bolt is right out in the open where you can access it with a screwdriver. The stock can remain on the rifle while you tighten it.

I’m going to cut through all the shooting I did on day two. Since I changed the sights and tightened everything, there were more sighters, and then I shot another eight 10-shot groups on this day. I discovered that JSB Exact 8.44-grain pellets are pretty accurate, and I shot the best group of the session with the Qiang Yuan Training pellets. Ten pellets went into 0.898 inches at 25 yards. 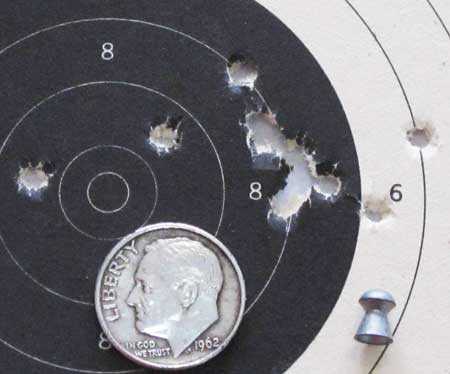 This 10-shot group of JSB Exact 8.4-grain pellets shows the potential for the HW35 to be a tackdriver. Five pellets are spaced just 0.392 inches between centers. Ten pellets, though, are in 1.788 inches at 25 yards, and they’re mostly due to my aiming errors. 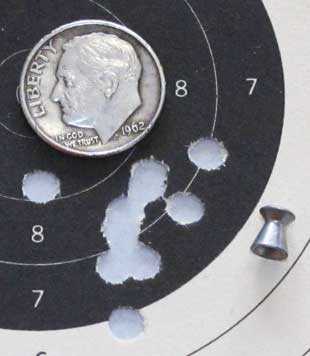 This group of 10 Qiang Yuan Training pellets measures 0.898 inches between centers at 25 yards. It shows the HW35 can shoot!

At this point, I am enjoying the rifle. It’s so easy to cock and shoots so smoothly that I simply like the sensation of firing. It almost doesn’t matter where the pellet goes — almost.

Next, I’ll disassemble the rifle so we can all have a look inside. I’m curious about the piston seal material and also to see if there’s been any tuning done. I plan on getting the safety working again, if possible. Hopefully, the rifle will still shoot as smooth when it goes back together.