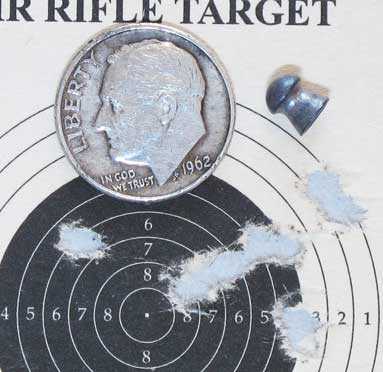 Today we begin looking at the accuracy of the Tech Force M8 pellet rifle — a breakbarrel that we have discovered is very similar to the discontinued Air Venturi Bronco. Because it is so similar, we can take what we already know about the Bronco and apply it to this rifle — the results will probably be the same, or similar, though we have to watch for anomalies that could crop up.

Today is accuracy day — the first of two such days we will have with the M8. Today I’m shooting the rifle at 10 meters. That gets me on the target and gives a chance for the rifle and scope to settle down.

The M8 comes without sights, so I have mounted a scope, and I think my selection will surprise you. I didn’t choose a whomptydoodle monster scope that costs three times as much as the rifle. Instead I’ve mounted a Gamo 3-9X40 scope with fixed parallax. This scope is nothing special — it probably came with a bundle deal on some other airgun. It’s reasonably clear and sharp, and size-wise it is well-matched to the M8. I shimmed the rear ring of the 1-piece Gamo scope mount that came with the scope, just to offset any possible barrel droop.

Now let’s look at the assumptions I made when starting this test. These are based on results when testing the Bronco.

When I looked back over the 11 blog reports I did on the Bronco, I found that Crosman Premier lites stood out as the most accurate pellet. The M8 has the same thin steel inner barrel inside a metal outer tube that the Bronco had, so there is no reason to suspect this is anything other than the same barrel.

Another thing I discovered in researching for this test is that my Broncos like their pellets seated deep. I used the Air Venturi Pellet Seater that allows adjustment for the seating depth. I will start the test with deep seated pellets and only change if that doesn’t seem to hold true for the M8.

I also discovered that the Bronco does not like being rested directly on a sandbag. In fact it liked a specific type of artillery hold that I talked about in Part 5 of the original Bronco report, back in 2010. So that is how I will begin testing the M8 — with Premier lites and with the special artillery hold.

Well, the best-laid plans… A lot of my assumptions did not work out. First, I couldn’t get Premier lites to group no matter what I did. I tried deep seating, flush seating and 3 different hand placements of my off hand, but nothing worked well. The best group of 10 Premier lites I got at 10 meters out of 3 targets measured 0.929 inches between centers.

This is the best of three 10-shot groups shot at 10 meters with Crosman Premier 7.9-grain pellets. It measures 0.929 inches between centers. I don’t think the M8 likes the Premier lite.

I then switched to Air Arms Falcon pellets and the groups tightened up. The first group of 10 was shot with a conventional artillery hold. That means the off hand was back on the stock touching the front of the triggerguard. Ten Falcon pellets seated deep went into 0.587 inches at 10 meters. Now, that’s a group! 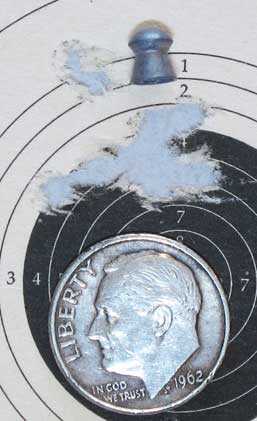 This is the first 10-shot group shot at 10 meters with Air Arms Falcon pellets. It measures 0.587 inches between centers. This is what I was hoping for from the M8.

Then I slid my off hand out to the end of the stock. This makes the rifle very stable, but it also proved to be quite twitchy. Nine of the 10 deep-seated pellets went into 0.858-inches, but one shot that was actually shot number 5 in the string, went wide left — opening the group to a whopping 1.644 inches. That was due to a variation of the hold and I felt it before the trigger broke. I cannot recommend this hold for the M8. 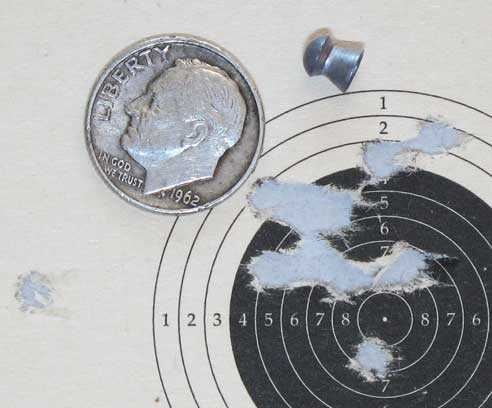 This is the second 10-shot group shot at 10 meters with Air Arms Falcon pellets. It measures 1.644 inches between centers, though 9 shots are in 0.858 inches. What a huge difference the placement of the off hand made!

Directly on the sandbag

I finished the test by placing the rifle directly on the sandbag and seating the pellets flush with the breech — things the Bronco didn’t like one bit! But the Bronco was shooting Crosman Premier lites at the time I tried it, so it was worth a gamble to try the M8 rested this way.

Ten pellets went into 0.581 inches, which is very close to the size of the first group of Falcons. I think Falcon pellets are good in the M8 and I think you can either use a conventional artillery hold or rest the rifle directly on the sandbag. 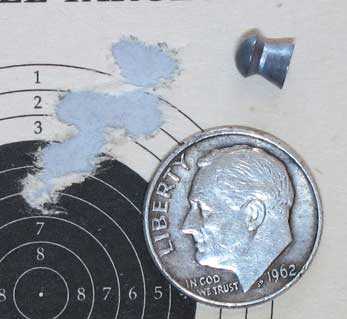 This is the third 10-shot group shot at 10 meters with Air Arms Falcon pellets. The rifle was rested directly on a sandbag. The group measures 0.581 inches between centers, and is the smallest of the test, though it’s really too close to the first Falcon group to call. Falcon pellets perform very well in this rifle when it is rested right!

The Tech Force M8 appears to be very similar to the Bronco in many ways, but it also has enough personality that you have to treat it as a different airgun. The scope I used is not a top model, yet it performed as well as could be expected.

I plan to back up to 25 yards for the next test, which will also be the last. Obviously Falcons will lead off, but I will probably try one or two other pellets, as well. I would have tried them in this test, but 60+ shots on a breakbarrel that’s hold-sensitive is quite taxing.

I think the M8 is turning out about like I expected. For the money you get a lot of desirable features:

We are still going to test the accuracy at 25 yards because that’s the distance we expect an air rifle in this power range to function. But I am already sold on the Tech Force M8. If you want one act now, because there are a limited number in stock. After they are gone there will be no more.