TDR stands for Take Down Rifle. That’s what the Air Arms S410 TDR Classic is — a rifle that comes apart for easy transport. Only Air Arms did it the right way — the way take-down rifles were marketed in the early part of the 20th century. They don’t just give you a rifle that comes apart — they also give you the rugged field carrying case to hold it. A case that has straps for carrying the rifle and is fitted, armored and padded inside for a perfect fit.

If you would like to see the inside of this case, just press play here:

The TDR is a repeating bolt action PCP that comes in either .177 or .22 caliber. The test gun is a .22 — serial number 144734. You get one 10-shot magazine with the rifle, and there is room to store another 2 loaded magazines beneath the sliding wood cheekpiece on the butt. With 30 rounds a hunter can go to the field without carrying more pellets. Thirty shots are more than enough for most kinds of hunting. When I hunt coyotes I typically carry 10-15 rounds and expect to fire no more than 2. For pests hunters, though, it’s different. A person shooting pigeons or rats in a barn will want to carry a tin of pellets to stop and reload the mags after awhile.

Yes, additional magazines are available. They are pricy, at $50 apiece, but hunters want their setups complete, and more mags are a must. The forearm with pistol grip and the cheekpiece are both made of what looks like walnut to me. The finish is dry and matte — resembling a fine British oil finish. The metal parts are a combination of steel and aluminum. The steel parts are highly polished and have a deep black finish that’s lustrous. The aluminum receiver and butt post are both finished matte and anodized flat black.

Very few readers probably remember that I did a 5-part report on the Air Arms S410 sidelever back in 2007. The report format was different than today and I only shot 5-shot groups, but the rifle we are examining today is the same basic design. And I shot that rifle for accuracy at 75 yards — another big departure from the normal way of doing business.

The S410 has variable power. A knurled knob on the right side of the receiver is easily turned by hand and the power indicator is on the opposite side of the receiver. The indicator looks like a slotted screw head and moves smoothly between the symbols “+”, which is high and “-” which is low. There are no detents, so the power can be set anywhere within the range. My advice is to find the one accurate pellet and power setting and then leave it set there. Forget dialing up and down for different situations — it’s too complex. I might have to write a report on that, because a lot of people think they are supposed to determine many power settings and pellets with their airguns. 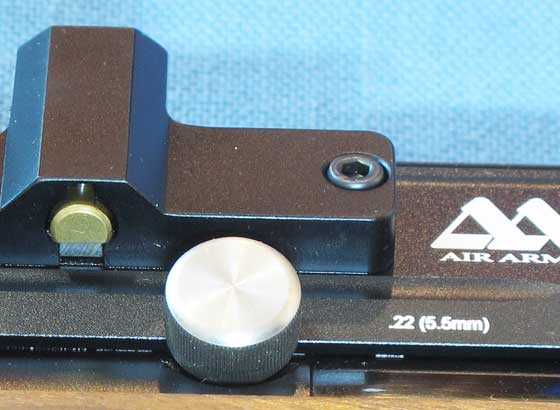 The power adjustment knob is on the right side of the receiver. 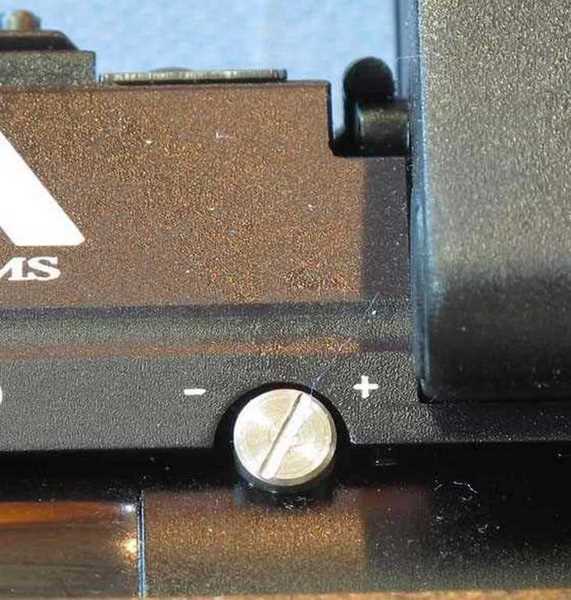 The slot indicates where the power is set. The rifle is set to high power here.

This .22 caliber version is supposed to generate about 31 foot-pounds of energy at the muzzle. Pyramyd Air provides some test results with a 15.9-grain pellet on the description page and that string goes from a high of 937 f.p.s. to a low of 894 f.p.s. for a 15.9-grain .22 caliber pellet. Of course that would be the total shot count for the gun at that power, so I will see what I can do when I get out to the range. I will still do velocity testing but it will be accuracy at 50 yards that determines the best pellet and power setting.

The TDR weighs 5.73 pounds, which makes it a lightweight. You’ll want to think about that when you choose a scope for it, because the rifle is perfect for a lighter more compact scope. The magazine sticks up above the receiver, so you will have to use 2-piece scope rings, but I prefer them anyway for their increased positioning flexibility.

The cheekpiece slides fore and aft on the metal bar it’s mounted to, but there is no up and down adjustment. Air Arms took care of that by making the rubber-coated buttplate slide up and down. So you can mount the butt low on the shoulder and bring the cheekpiece up high to your face. The pistol grip does make the trigger-pull very short. That’s a commion problem with most rifles that have pistol grips, but since many people like them, I guess we can adapt. Actually because the butt removes, this pistol grip is needed to secure the rifle better in your hands. There isn’t a stock wrist to hold onto.

To attach the butt all you have to do is align three pins at the front of the butt with their respective holes at the rear of the receiver. Then push the parts together and secure them with a thumbscrew mounted in front of the buttplate. The trigger guide rod in the center of the receiver has spring tension that you must push against when attaching the butt. It’s fast and easy. Air Arms put the assembly (mounting the butt) instructions at the back of their manual, but they are among the first things you’ll need to read and understand. 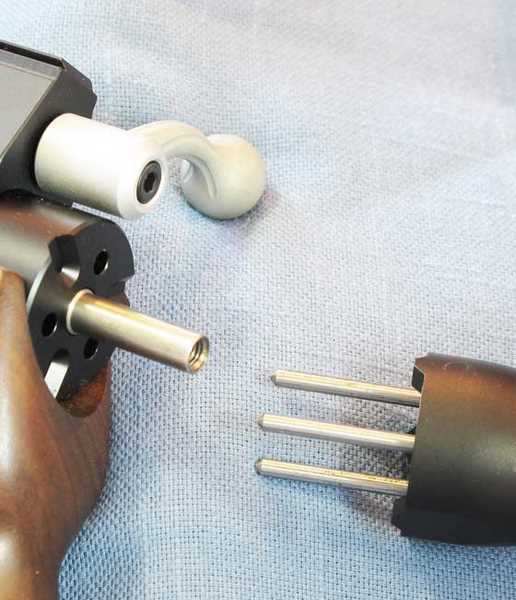 The three pins go into their respective holes and the spring-loaded central rod from the rifle action goes into a hole in the center of the butt attachment point.

Once the butt is attached the fit is solid. I shook it hard and there was no movement. The manual also warns to not fire the rifle with the butt detached. If you do the power will be very low and you might get a pellet stuck in the barrel.

The TDR comes with a muzzle brake that in the United Kingdom would be a silencer. But in the U.S., silencers must be licensed by the ATF&E under the provisions of the National Firearms Act. That will cost you $200, and you must have the license with the silencer at all times. The muzzle brake that comes with the TDR has no technology inside to reduce the gun’s report, which is considerable. It rates a 5 on the Pyramyd Air scale. For hunters it shouldn’t be a problem, but understand that this is not a quiet indoor plinker. 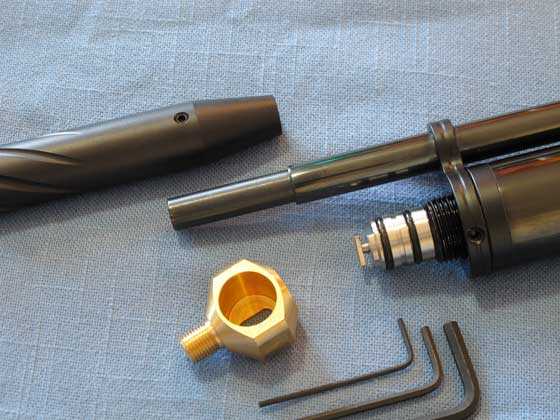 Muzzle brake slips over the barrel and attaches with a single Allen screw. The fill adapter and wrenches are also shown.

Additional items that come with the gun

Included with the gun are the brass Air Arms fill adapter. It has 1/8 BSP thrteads, so it attaches to an air hose coupling that has female threads of the same number, size and count. There are also 3 Allen wrenches for making various adjustments to the gun. And in the package with the test gun there was also a sample bottle of Napier Power Airgun Oil.

The 2-stage trigger is adjustable for pull weight, length of stage one and location of stage 2. The stage 1 and stage 2 adjustments affect each other, so you have to pay attention when adjusting them. I will adjust the trigger in Part 2 for you. Because of the noise, I’m going to do both Parts 2 and 3 at the range.

There are no sights on this rifle, so some kind of optical sight has to be mounted. A scope makes the most sense, and, as I have already noted, that scope should be compact and light. Fortunately Air Arms thought it through and provided a space for the scope inside the gun case, so that space will help you define the scope as well. The space is 17 inches long and has cutouts for both an illuminated reticle control switch and for the vertical turret knob. It’s as if the designers actually thought this through! 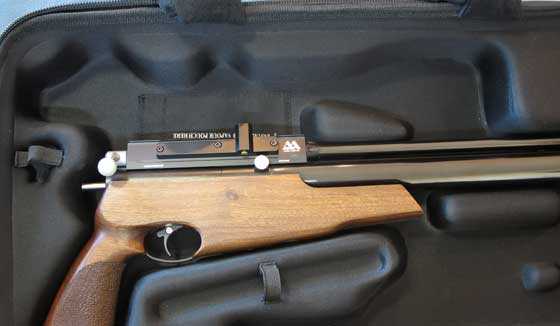 Air Arms provided plenty of space for a scope inside the case.

I’m kidding, of course. Air Arms designers are airgunners themselves. They don’t just build airguns — they build the kind of airguns they would like to own. You can count on their guns being well thought-out. 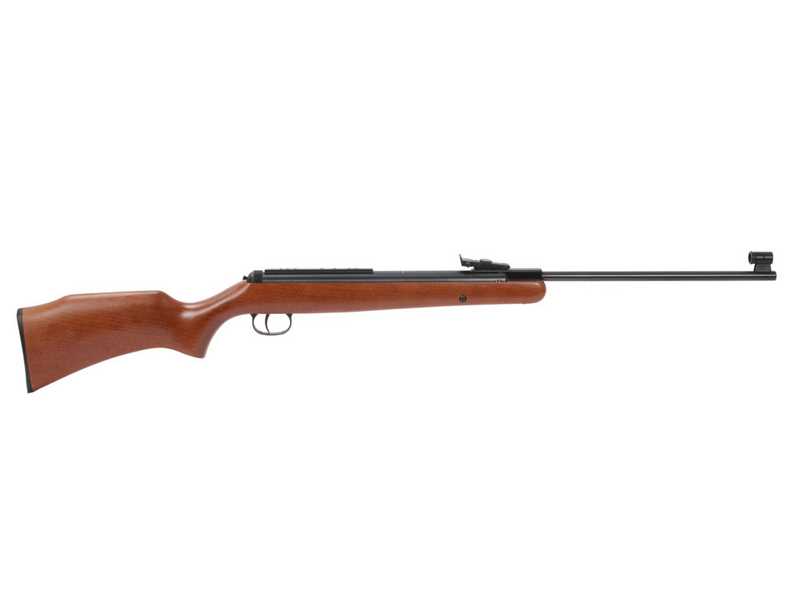