This report was requested by several readers after seeing a cased air cane in an earlier history report.

In the 19th century, the airgun world developed many curiosities, but none made more of an impression on today’s collectors than the pneumatic walking stick, or air cane, as it has come to be known. They survive by the thousands and fascinate all who see them. Today I’d like to examine the air cane!

Here we see a complete simple straight cane disassembled. From the left the parts are: the lower outer shell, the upper outer shell that is also the reservoir, the smoothbore barrel and lock, with the firing valve removed from the reservoir, the rifled barrel insert and the ramrod that doubles as the cane’s outer tip for walking.

What is an air cane?

An air cane is a large-caliber single-shot pneumatic gun that fires many times on one charge of air. Most are muzzleloaders, but there are a few breechloaders that employ loading taps. There is no standard design, but the most common canes are straight smoothbore guns of about .43 caliber with a rifled insert barrel of .28 to .33 caliber. The lock and firing mechanism is completely hidden inside a two-piece smooth metal shell that looks like a thick walking stick. A male key is inserted into a square socket in the side of the cane to cock the lock for each shot, and when the lock is cocked a small metal button pops out to serve as the trigger.

Here you see the air cane’s cocking socket. A square-shaped clock key is inserted and turned to cock the lock. I have cocked the lock for this photo and the firing button (the trigger) has popped out on the cane’s body at the upper left.

The air cane lock is unique, but bears more than a passing resemblance to a percussion lock of the same period. The cane is divided in two sections, with the top section being the air reservoir and firing valve and the bottom section housing the lock and barrel. Look at the photo of the disassembled cane to see these parts.

Canes can fire at least 10 shots from a single fill of air, and as many as 40 shots have been recorded from some of the largest examples. The first few shots (on CO2) will propel a 121-grain .43-caliber lead ball at about 650 f.p.s., which is lethal. On air you can expect another 100 f.p.s.

What was their purpose?

The popular myth is that air canes were 19th century defensive weapons. Most advanced collectors believe this is untrue, because it takes a lot of work to make a muzzleloading air cane ready to fire. Perhaps, if you knew you were about to go in harm’s way, you might have time to make the weapon ready, but a derringer or even a good knife would be better. Using an air cane for self-defense would be the equivalent of holding up a liquor store with a flintlock — not the thing a thoughtful person would do. I think sword canes are much more capable defensive weapons, and people have probably extrapolated the defense role to air canes because of their similar appearance.

Many collectors believe the principal attraction to air canes was simply their existence. They were portable science experiments one could use to amaze both family and friends.

They were not used as walking sticks. The end of the ramrod did have a brass tip that could be put on the ground, but it was too fragile to serve as a walking support. It was more for show than for go.

Pneumatic canes were produced by some large makers, who used their own workers plus the collective output of many cottage industries. They brought all the parts together in a design that did not vary over many years. Hence, there are common types of canes, yet each cane is also a unique, handmade object.

A lockmaker fashioned the locks to fit inside the housings used by his principal customer, the cane maker. He was therefore motivated to work within the envelope, so to speak. A barrel maker probably knew very little about making a reservoir or a valve, and only at the cane-making house, whose name sometimes graces the lock, did all the components come together.

The straight cane shown at the beginning and end of this report is by far the most commonly encountered style. It could be purchased as a smoothbore alone, a smoothbore with a rifled insert barrel or with all the tools and the necessary hand pump, cased together in an attractive display box. Sometimes there was an additional reservoir shaped like a shotgun butt, so the cane could be converted to a more sporting use.

One level of sophistication above the straight cane is the bent cane, whose steel reservoir is curved gracefully to showcase the maker’s craft. Bent canes were often sold as cased sets, and sometimes they also came with an additional shotgun-style reservoir butt to replace the bent reservoir when the owner wished to shoot it for sport. It wasn’t a very practical sporter with the button trigger, but no one seemed to care.

A bent cane is similar to a straight one, but demonstrats the cane maker’s skill at bending a steel reservoir this gracefully.

Beyond the bent cane, there was the shillelagh. It was a straight cane, but the exterior steel or brass casing was covered with spot-welds or lumps of braze that were filed and smoothed to look like the nodules of blackthorn wood — just like a traditional shillelagh. All that most of these canes lack is the traditional shillelagh cudgel, made from the root of the branch. This style cane is quite scarce in the U.S. Of the 200 or so air canes I have examined, only two have been shillelaghs. They command about twice the price of a nice cased bent cane with the pump and all the accessories, which sells for about $2,000 to $4,500.

The air cane came into its own after the ball reservoir airgun had left the scene, sometime around the year 1800, plus or minus. That’s not surprising because having a ball reservoir hanging off an air cane sort of defeats the purpose of looking like a walking stick. However, I saw the one exception. It was a rare shillelagh air cane with a brass reservoir that served as the cudgel. 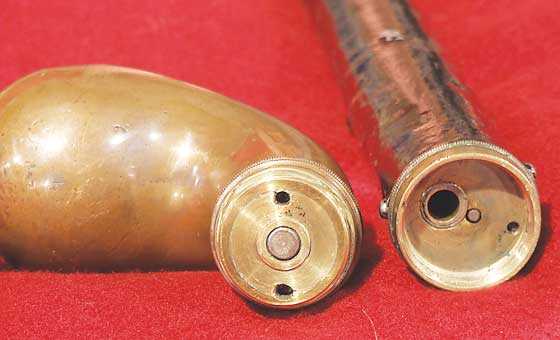 Where traditional shillelagh air canes are built of spot-welded steel or brazed brass to simulate the look of an Irish blackthorn branch, this particular cane is housed within a genuine blackthorn outer sheath! The wood was carefully hollowed out to accept the cane’s action and barrel, a difficult feat in the days before Dremel tools! The brass air reservoir is fashioned to look exactly like a genuine blackthorn root cudgel that might be found on a real shillelagh fighting stick.

Many air cane owners shoot their guns regularly. The original air valve was sealed with a piece of animal horn, lapped into an airtight seal by turning it against the valve seat under pressure. Common chalk and oil were used as a cutting and lapping  compound, and the valve maker knew when to stop by the squealing sound made when the seal was perfect.

But perfect is a relative term. That animal horn was porous and did leak over time. So a lubricant like whale oil was applied to the horn seal, to enhance its airtight nature. That is the purpose of the small oil bottle often seen with cased specimens.

When a cane is prepared for use today a modern Delrin valve face is substituted for the animal horn valve face, but all the other original parts are retained. Delrin is non-permeable, so the whale oil is no longer needed to seal the cane.

The operating pressure of an antique cane is in the 500 to 650 psi region, so the modern owner can either fill it with air to that pressure level or substitute CO2 gas in its place. Because CO2 operates at around 850 psi at 70 degrees F, the cane’s reservoir should be hydrostatically tested before filling.

Once the cane’s reservoir is filled, you will get no less than 10 and often as many as 20 powerful shots before a refill is required. There are even more shots than that, but the final few will be so weak that they’re not worth the effort. Each cane is unique and requires the shooter to learn its characteristics.

The smoothbore barrel of a typical straight cane will accept an unpatched round ball of about .433 caliber. A greased or oiled patch does not improve accuracy nor velocity, as long as the ball fits the bore reasonably well when dry.

The ball is rammed to the bottom of the barrel. Then the lock is cocked, causing the button trigger to pop out of the cane’s side. On every cane I have examined, this button has been positioned for release by thumb pressure of the left hand (for a right-handed shooter). 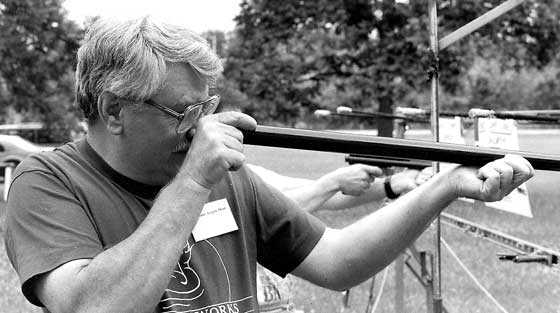 David Yost shoots my air cane (I bought it from him) at the St. Louis airgun show around 1997.

The top knob of the cane is held to the tip of the shooter’s nose so the tiny open sights (yes, these canes do have tiny open sights) can be seen. Once the sight picture is right, the button trigger is pressed and the cane fires with a loud, deep bellow. You feel a rocket-like push from the recoil that is approximately equal to a .32 S&W Long cartridge fired in a medium-weight revolver.

I’ve shot several smoothbore canes that were accurate enough to hit a soda can every time at 20 yards, so there is an element of close-range marksmanship to them. When a 121-grain .43-caliber lead ball connects with a full soda can at 600 f.p.s., everyone in the vicinity knows it!

Air canes are a strange, yet fascinating niche within airgunning. They are the pneumatic equivalent of a primitive flintlock rifle. Their owners travel life in the slow lane with the windows rolled down, enjoying airguns that almost defy classification.