Shooting galleries have been a major influence in the shooting sports for close to a century and a half, and airguns have had their day in galleries. Reb, our most outspoken reader, once ran a traveling shooting gallery that featured the popular “Shoot out the Red Star” game. I’ll discuss that at the end of the report, but right now I’m going back to the beginning of shooting galleries.

And, who can really say when that was? We know from documents and from tapestries that shooting events were popular in Europe in the 1400s. But those were sporting events that came and went — they weren’t the galleries I am discussing today. The crossbows and guns that were used at those events belonged to the shooters. They were not rented by the gallery to the general public.

The first shooting gallery I can document opened right after the American Civil War — around the year 1866. That probably means that galleries existed long before that time, but I can find no documentation of them. All I find are organized shooting events not that dissimilar from the earliest contests mentioned before.

Archery as a social pastime probably predates the shooting galleries by many years. I don’t consider archery to be the same as a shooting gallery, but if you do then my dates are way too late.

I have read that galleries prospered and grew right after the Civil War because American men had recently been forced to learn to shoot. This is mostly talking about men from the northern states, because the southern men were generally very familiar with shooting when the Civil War began.

But an entire generation of (northern) men became used to the idea of shooting and found it both challenging and rewarding. They wanted to share what they had learned with the women in their lives for several different social reasons (it was fun, it showcased the male ability to shoot, etc.).

These gallery guns I’m describing were very weak, compared to regular firearms. In the 1840s people discovered that the priming charge from a percussion cap, alone, could propel a small lead ball with enough accuracy to make things interesting at close range. The noise made when the cap fired was small compared to a firearm discharge. The smoke from the gunpowder (black powder) of the day was not as prevalent when just a percussion cap was used. These two very important things — lower noise and less smoke — made shooting indoors viable for the first time.

Shortly following the discovery of the indoor use of the percussion cap, several key things happened in short order. First, percussion caps were shaped more conveniently (they got a rim and soon became known as rimfire) for handling and loading. Second, breechloading mechanisms were becoming more popular, making the loading of guns easier for those who were unfamiliar with firearms. Finally the percussion caps received a captive bullet (lead ball) in their end, creating the first self-contained cartridge. All of these things played into the birth of the public shooting gallery. In 1856 the firm of Smith & Wesson patented the cartridge known today as the .22 short — a cartridge that lasted in shooting galleries for as long as they operated.

It wasn’t long before airguns came into the galleries. The earliest guns that were capable of withstanding repeated use and abuse from many different hands came about in the 1850s. By the late 1860s, when the galleries really took off there were gallery airguns to go with them. I have already done two parts of a report on a gallery airgun I own that was made in the late 1860s by David Lurch of New York. We can know the approximate date of manufacture by the address stamped into the barrel.

David Lurch gallery gun was made around 1866. 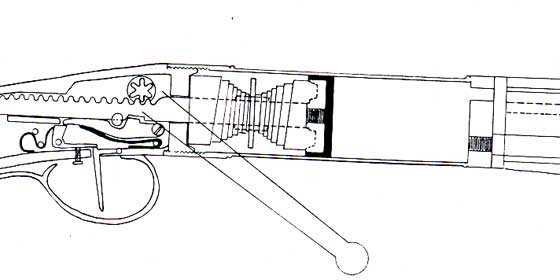 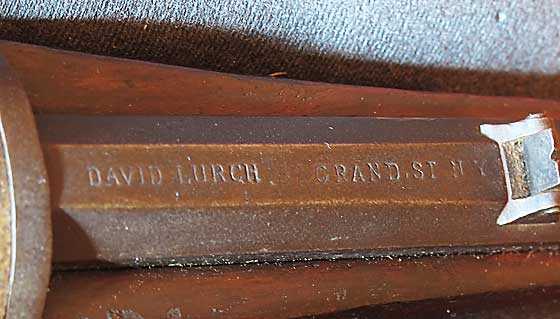 The address on the barrel pins down the date of manufacture.

Some of these early gallery airguns shot darts and others shot clay pellets that operated reactive targets or left a splat on a painted surface. Very few were powerful enough to shoot lead balls, and lead pellets were not yet fully developed. Their calibers ranged from .25 up to over .30, with .28 being a common size.

There were even repeating gallery airguns. They had to be cocked for every shot, but had many projectiles in a magazine — as many as 56 rounds in the cylinder of a Bunge airgun.

What killed the airgun?

Airgun shooting galleries never died completely. We ran one at Frontier Village, a western-themed amusement park in San Jose, California, where I worked in the 1960s. We had either 10 or 12 guns tethered to a source of air and we loaded them with lead balls of about .22 caliber. Our gallery was about 20 feet deep and 20 feet wide and all the targets, both moving and still, were painted with a non-drying lead paint. That showed the splatter of the balls the best. We repainted the targets every few days, depending on traffic. 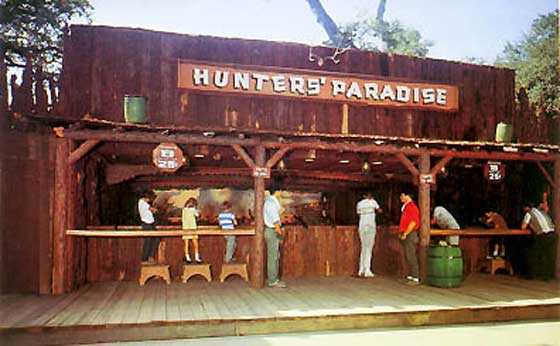 Cost was the main reason we ran airguns instead of firearms. We collected the spent lead balls, shipped them back to the ammo supplier who credited us for the lead when they cast new ammunition. Maintenance was a second good feature. Airguns never need cleaning the way firearms do. We saved many manhours by not having to clean our guns.

Airgun galleries still exist in some places in Europe and the UK. But in the U.S. the rise in popularity of the rimfire cartridge, plus the invention of slide-action rifles made the slower airgun seem less thrilling in comparison. However, there was one exception. Remember the red star?

There is an airgun that looks like an oversized Thompson sub-machinegun. It runs on shop air and shoots 100 number 2 lead shot in what appears to be a fully automatic mode. The distance it shoots is very limited — the gallery that uses it is housed inside a trailer and the range is measured in a few feet. The object is to obliterate a red star on a paper target, which is almost impossible to do.

The Feltman gallery gun was used to shoot out the red star.

These guns have been operating for many decades at carnivals and local fairs, where they offer stuffed animal prizes for success. The fun is in the shooting, because almost no one ever succeeds in shooting the star completely away.

One of the makers of the guns over the years was Feltman, a name that sort of stuck with the gun.

I will now defer to Reb, who has operated this game around the country. Take it away, Reb.

240 thoughts on “The influence of shooting galleries”