Home > Blog > PCP > Airgun flaws to watch out for

Today’s blog was suggested by reader RidgeRunner after we had a short discussion of the Modoc big bore rifle. Here is what he said.

“Perhaps you should give serious consideration to a blog about flawed designs for airguns. It could be most informative, most especially to the newbies. These episodes show much thought must go into the design of an airgun and also that care must be used when handling them.”

I didn’t want to write just about one airgun, and this seemed like the perfect way to address the issue. Additionally, there are many more shooters who are new to airguns, and this is a necessary safety topic for them.

The spring-piston airgun is the lowest-powered airgun powerplant. The most powerful spring piston rifles generate just over 30 foot-pounds, where pneumatics and CO2 have both topped 1,000 foot-pounds. But spring piston guns are the most common today and they are the type of powerplant the new shooter gravitates to. There are so many more of them that they are the best place to begun.

Maybe you are too new to the hobby to remember the 1970s, when the Chinese B3 underlever was cutting off people’s thumbs when it slipped off cock and the sliding compression chamber went forward violently? It was a big problem in the day and it turned out nobody was taking responsibility for the rifle, at first! 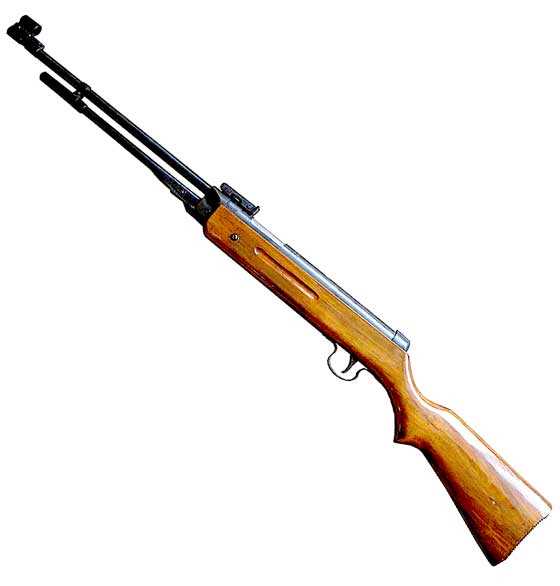 This B3-1 is an updated version of the original Chinese B3-1 underlever air rifle.

I owned an original B3 that I bought from the fledgling Compasseco when they were just getting started. They put an ad in American Rifleman magazine and I couldn’t resist the promise of 800 f.p.s. for $39.95. Did I get it? Probably not, but since I didn’t own a chronograph we’ll never know.

The problem with this air rifle was the low quality of the powerplant parts. The steel parts were not uniformly hardened, so the sear wore until it would not hold the sliding compression chamber back. And there were no safety features to stop the chamber if that happened. If a shooter’s fingers were in the way when it let go, they got smashed or worse.

These rifles were being sold to anyone with money, so every gun dealer in America could buy them. I remember seeing them pile high on tables at gun shows. The dealers were dry-firing them to demonstrate their power, although I never figured out what that proved.

Compasseco did everything in their power to correct the problem — working with the Chinese airgun factories to get better materials, better quality control and better designs that were less prone to this sort of failure. Today’s airgun community owes a lot to their tireless efforts that eventually turned the Chinese airgun makers around. But there is still a problem.

There are still hundreds of thousands of these early unsafe airguns around, waiting for someone to experience the same problems I just reported. The fact that the Chinese makers now make quality airguns doesn’t do anything for the guns of the past. So the warning here is buyer beware. And NEVER let go of the underlever when you load a rifle that has a sliding compression chamber — I don’t care if it’s a TX 200 Mark III.

Now, the B3 had flaws, which is what today’s report is about. Other guns that don’t have flaws must still be handled with care while loading — and for the same reason. This lesson holds true for sidelevers and breakbarrels — any powerplant where your fingers are put into a space that can suddenly close with force. Any of them can close suddenly without warning, so always restrain the cocking lever or barrel as you load a pellet.

Big bore airguns that launch arrows are, by design, muzzleloaders. That means your hands have to be in front of the muzzle to load them. If they were to fire while you are loading the arrow that you plan to kill a hog or a deer with, that arrow can do the same to you! That being said, all muzzleloading firearms are dangerous in exactly the same way.

A black powder charge can be ignited by a hot ash or coal remaining in the gun after firing, so loading a muzzleloading gun is a dangerous process. I always swab the bore with one patch wet with water followed by two dry patches. Not only does that reduce (but not eliminate) the possibility of something hot remaining in the barrel, it also removes the majority of ash and soot from the last round. I can shoot indefinitely this way, where if I didn’t swab the bore the gun would be too gunked up to load after perhaps a dozen shots.

The owner of an arrow launcher needs to practice keeping his hands out of the line of fire as he loads. On some guns this is almost impossible to do, as the last part of seating the arrow requires that it be pushed in hard from the tip. Consider this when buying an arrow launcher.

Now let’s talk about the Modoc. I actually tested two different rifles. The first one failed to work altogether and the second had one cartridge out of three that did work and two that didn’t. The manufacturer, Air Ordnance, actually sent blank slugs with the second gun — to fill the three loading positions in the loading station. If one or more of the cartridges failed, the others could still be filled without all the air leaking off. Of course the slugs also allowed the filling of just one or two air cartridges instead of all three, which was the purpose for which they were created, I’m sure. 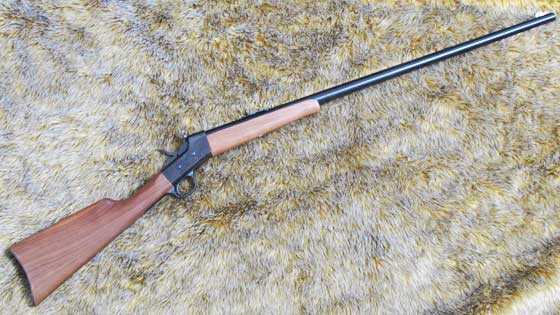 The Modoc is a single shot 9mm big bore rifle that’s based on the Remington Rolling Block. 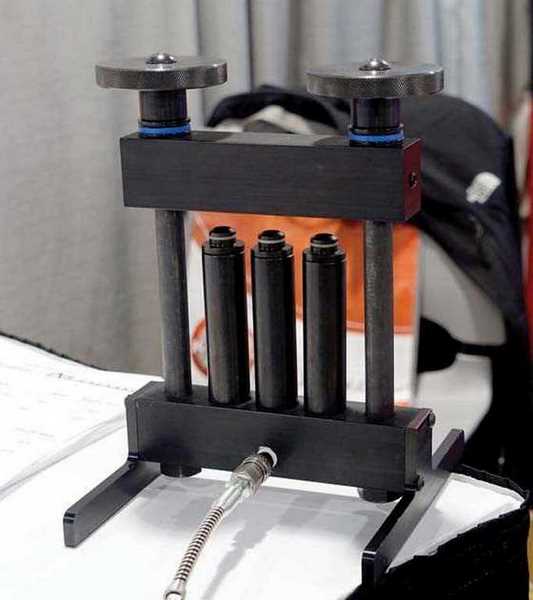 The fill station fills up to three cartridges at a time to 4.500 psi. Each cartridge dumps its entire charge when fired.

Let me set the record straight. I never had a safety problem with either of the two Modocs I tested. Both had cartridges that leaked air, which is why I cancelled the test, but there were no safety problems with the guns. However, if an air cartridge were to suddenly discharge after being loaded into the rifle but before the breech is closed, the bullet would stick in the bore, sealing the air behind it and propelling the cartridge out of the back of the gun at high velocity. It’s the same problem as the arrow launcher, only at the breech instead of the muzzle. It’s not a flaw, perhaps, but certainly a weakness that should be recognized and handled accordingly.

It may sound like I’m too hard on airguns that fail, but I assure you I’m not. I remember when Crosman sent me a prototype of the Benjamin Maximus that was just a mule for things like stock dimensions and catalog photography. It had a mule barrel (a non-working item that stands in but isn’t representative of the finished product) they knew wasn’t accurate and soon after I received the rifle they emailed me to disregard that rifle because it wasn’t meant for my testing. I did and never wrote a word about it until today, because I realize that mistakes happen.

On the other hand, when a manufacturer sends me a sample gun they think is ready to go and it fails, I treat it differently. And, after they send the second one that also fails, I close the book. I usually don’t write about it, because that doesn’t help anybody, but I will never test that item again. The saying goes, “Fool me once, …”

My house is full of holes from pellets that hit the wall or ceiling when the trigger failed. I also once shot my couch, but that wasn’t due to a faulty trigger. That was a faulty Tom! The point is — triggers can fail.

I remember one time that happened while hunting in Germany. I was walking to my high seat and loading my Sako rifle as I walked. Yes, I said Sako — as in a high quality firearm. When I closed the bolt the rifle fired, sending a .222 Remington bullet into the ground three feet in front of me. It certainly caught my attention! I had adjusted the trigger too light and it was a direct contact sear whose contact area gets smaller and smaller as the trigger is lightened.

Another time I was in my office testing a BSF S55N spring rifle for this blog. Robert Beeman wrote long ago that BSF triggers wear in until they become almost too light to hold. This one didn’t hold, and it put a nice round hole in my ceiling. Until it happened I doubted what Beeman had said. I just thought BSF triggers were good.

Other triggers can fail, too. I have seen Rekords that were adjusted too light and would only hold occasionally. Their owners treated their guns like they were nitroglycerin after they were cocked, instead of adjusting the triggers to be safer.

What can I say about CO2, other than to handle the guns that use it with care? Things to watch out for are guns that allow you to exhaust the gas at any time. If there is a lot of gas still inside, the rapid cooling of your hands can promote frostbite. Not a flaw, but certainly a caution.

And my final one is a safety tip for all airguns and powerplant. These guns launch projectiles without gunpowder. One way or another, the power is contained inside the gun. Anything that is loaded into the barrel will come out at high velocity if the gun is discharged. I will not name the things that might be used for fear of prompting a misdirected science experiment.

Now, RidgeRunner, I probably missed a couple things you hoped for. Tell me what they are and there can be a Part 2. 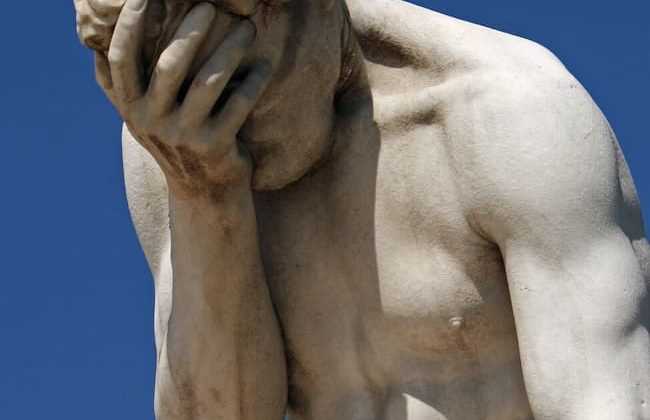