Today we begin a subject that lies at the heart of the airgun. Rather than try to defend that statement at this time, I will present evidence as we go, because the body of evidence is both large and spans much of the over two centuries of the rimfire cartridge history.

Wait a minute, BB. I just read on Wiki that the .22 Short — the first .22 rimfire cartridge — was patented by Smith and Wesson in 1854 and launched to the public in their new revolver in 1857. Today is 2018. That’s only 161 years. How can you say the rimfire cartridge has been in development for over 2 centuries?

I will address that now!

Reverend Forsyth was a Scottsman, born in Belhelvie, Scotland on December 28, 1769, and died in the same town on June 11, 1843. He was a Presbyterian minister who experimented between 1805 and 1807 with a fulminate of mercury compound that exploded when hit with a sharp blow. He did not invent the compound, but rather worked with it to invent a way to use it. He knew immediately that his invention could replace the troublesome flintlock that often misfired, was subject to rain and water and had to be scrupulously maintained in order to work.

His first successful attempt at replacing the flintlock came in 1805. It was a small steel container, called a “scent bottle” for its resemblance to that now-obscure item. [At this time smells in public were overpowering and there weren’t many ways of masking them. Some women carried a small bottle of scent, or perfume, to block or mediate the foul smells.] 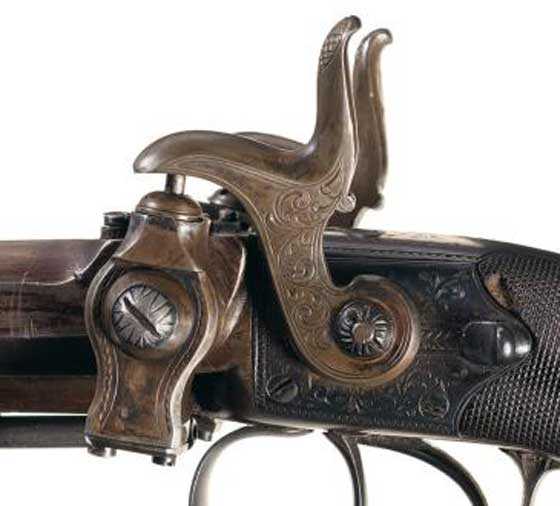 This is a double barreled pistol that has a scent bottle for each barrel.

The scent bottle fed a small amount of loose fulminate of mercury priming powder into a place where the hammer smashed it against an anvil. The explosion was contained within the bottle and was directed into the barrel by a channel, in the same way that a flintlock directs its explosion into the main powder charge. There were a couple of problems with this.

First — remember that maintenance I talked about with the flintlock? The scent bottle has the same requirements, but now they are not as accessible to the shooter because of the bottle. You may get a couple shots without cleaning, but when you need to clean the lock it needs to be opened for access. A flintlock is exposed in this area and much easier to clean. Forsyth made his locks easy to dismantle for this reason, and at the time (before 1820) repeating arms were almost unheard of. So the slow speed of gun management did not deter people from the novel new system of percussion.

The bigger problem, though, is having a container of explosive powder next to your face when part of it explodes! History doesn’t report many cases of explosions with Forsyth locks, but his scent bottles were very closely-fitted and therefore expensive. Not that many were produced. I have read that Forsyth used a tapered plug that was covered with platinum to separate the reservoir of priming powder from the charge being detonated, but other less exacting makers that followed him made scent bottles that were cruder in construction. I have to think those might have had problems.

There is a lot more to Forsyth’s story, but I’m now going to skip ahead to the next significant step — the invention of the percussion cap. 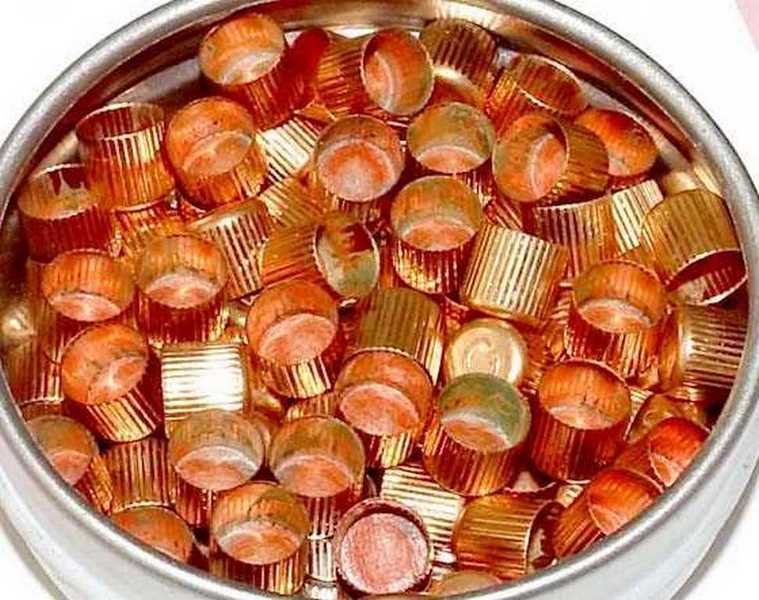 These modern percussion caps aren’t much different from those made 150 years ago.

The cap is placed over a hollow tube called a nipple, where it can be struck by a hammer to initiate the explosion. The hammer keeps the explosion contained (the copper cap is often blown apart by the force) so all the force of the explosion is directed down the hollow nipple and into the main powder charge in the barrel. 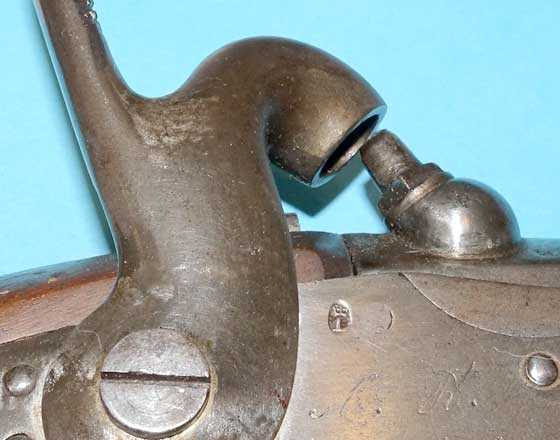 The nipple on this French model 1822 pistol was added during a conversion from flint to percussion in 1826 (the date of the conversion is stamped on the gun). Notice that the end of the hammer is cupped to prevent the exploding percussion cap from sending flying copper pieces out to injure the shooter.

Where the scent bottle was almost unknown in its day, the percussion cap gained immediate attention among shooters — most of whom were either hunters or soldiers. By 1825 the firearms world was embracing percussion ignition. Champions of the new system touted its reliability, speed of reloading, speed of ignition (so-called lock time that the flintlock was responsible for) and most importantly, resistance to weather. Are you aware that battles in those days were often cancelled because of rain that made bowstrings slack and flintlocks unreliable?

The naysayers asked what happens when they ran out of percussion caps? Any self-reliant man of the day could find flint and knap it into shape for his gun. But when your percussion caps ran out, all you had was a long club!

By the middle 1830s the flintlock system was fading away. But then something very strange and exciting happened. Nobody knows who came up with the idea, and it probably sprang up in several different places in Europe around the same time. I’m talking about the idea of using the power of just the percussion cap to launch a small lead ball!

This is the birth of airguns, but not for several more years. First, people learned that a percussion cap would launch a small lead ball very fast. The smaller the ball, the lighter it was, and, with experimentation, 4mm was found to be a good size. They didn’t know it then, but they were topping 1,000 f.p.s.! Then somebody wondered if rifling the barrel would improve accuracy, which of course it did. Thus the Zimmerstutzen was born! It would then evolve on a path of its own and is still alive in Europe today.

However, at close to this same time (1845) a Frenchman — Louis Nicolas Flobert — modified a percussion cap by putting a rim on its closed end. That allowed the loading of the cap into a chamber that was bored straight through from one end to the other.

The priming compound went into this rimmed cap wet and was spun into the rim by centrifugal force. Because it was concentrated in the rim, a firing pin or the narrow end of a hammer would strike the rim and crush it, causing it to explode. This invention did away with the need for a nipple, and the bore could be open on both ends of the barrel. The rim sealed the breech. This is the beginning of both the rimfire cartridge and also of the breechloading cartridge!

There were flintlock breechloaders before this time (Collier and Hall), but they had problems sealing the breech against gas loss and were ultimately unsuccessful. With a copper cap-turned-cartridge in the breech to expand with the pressure, the gasses could be sealed.

Flobert made his cartridges and guns in both 6mm and 8mm, with the 6mm being the most popular. The earliest guns did not have a breechblock. They used just the weight of the hammer plus the strength of the hammer spring to keep the hammer down on the cartridge when it exploded. But breechblocks followed soon after.

In the U.S. companies loaded Flobert-like cartridges, but they made them in inch patters and soon settled on .22 caliber, which is very close to 6mm (.243). The first cartridges were called BB caps, however the exact meaning of that acronym is no longer known. Early 20th century catalogs refer to them as Bulleted Breech caps, so that name has trickled down to today. I have also seen references to ball breech caps, but they are not as common as Bulleted Breech caps.

The next development, though, is well known. Manufacturers started putting conical bullets into these rimfire cases, calling them Conical Breech caps, or just CB caps. 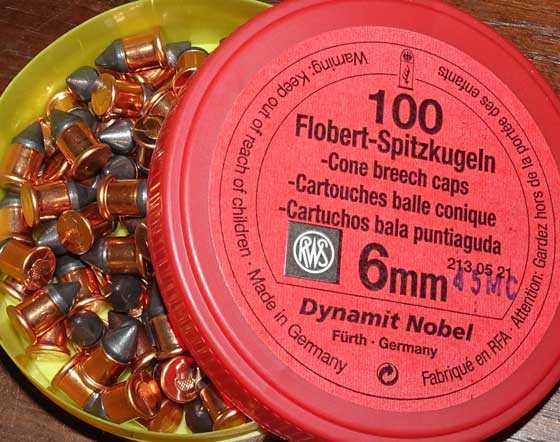 This box of RWS cartridges ties everything together. They are called Flobert pointed bullets, but also Conical Breech Caps. They are labeled as 6mm but the bullets measure .222-inches in diameter, which is 5.64mm, and they are shot in .22 rimfire guns!

Flobert guns abounded! This was an idea whose time was overdue. It brought shooting indoors — safely and quietly. One place it was soon seen was in shooting galleries. No longer did a shooting gallery have to be outdoors. Flobert cartridges made it possible to set galleries up inside buildings, out of the weather. Flobert cartridges were also quieter — a major benefit for indoor shooting. Because of the shorter distances on indoor ranges, the cartridges didn’t need to be as powerful, which played into the CB cap design.

In the early 1850s Horace Smith and Daniel Wesson acquired a patent for the bored-through cylinder. A revolver cylinder was bored straight through from front to rear and could be loaded in the rear and fired out the front. Until this time, all revolvers were loaded from the front and fired their bullets back out the same way. The back of the cylinder was closed except for a percussion cap nipple. Loading from the rear sped up the process of loading many times!

To go with their first revolver — the First Model S&W — Smith & Wesson took a CB cap and filled it with three grains of black powder (which was just called gunpowder in those days). The bullet was a 29-grain lead conical with a heeled design. The heel of the bullet inside the case is smaller than the bore but the part of the bullets that’s outside the case fits the bore perfectly. The heel is designed to expand when the cartridge fires. That seals the bore. 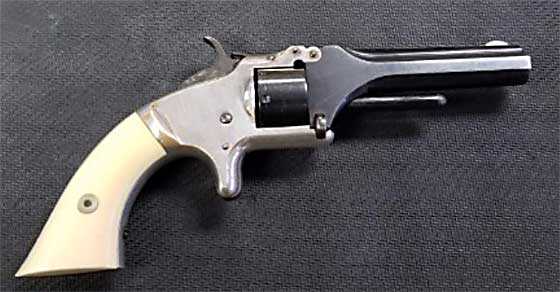 This nice S&W first model revolver was the first firearm chambered for the .22 Short cartridge.

During the Civil War men on both sides bought and carried this small S&W revolver for use in tight situations. Given that the cartridge was loaded with three grains of black powder and the bullet was fired from a short revolver barrel, it was probably lucky to develop 15-20 foot-pounds of energy at the muzzle. A standard speed Short bullet today develops around 56-58 foot-pounds.

This cartridge was just called a .22 rimfire until 1871, when the introduction of the .22 Long cartridge caused this one to gain the name Short.

The new .22 Short was also great for indoor galleries except for the smoke it produced! By the time it came to market, some shooting galleries were using hand-built airguns that saved them a lot in ammunition costs. These airguns were expensive — ranging from $10 to over $35 at a time when a Flobert-type rifle might cost $5 or less, but the savings in ammo costs paid for the airguns in a short time, if the gallery had a lot of traffic.

The .22 caliber was probably based on the 6mm Flobert that is so close in size that even today many people shoot 6mm BB caps and CB caps in .22 firearms. I have done so many times.

I didn’t make the connection in the report, but the Zimmerstutzen I mentioned earlier is where the modern 10 meter target rifle came from. All of the rules of that sport of target shooting and the targets came with it. So, we are already deep into the history of the airgun, and there is a lot more to come!

71 thoughts on “The development of the .22 rimfire cartridge: Part 1”