Today I will finish the general description of the new Sig ASP20 breakbarrel rifle. If you want one you should have placed an order during the Cyber Monday sale, when they were 20 percent off!

Let’s begin with the silencer. I mentioned in Part 1 that it is a real one with technology inside. Instead of baffles Sig uses three “hair curlers,” or at least that’s what they look like. They are in series and are each wrapped with felt. I can tell you that they definitely work. Also the gas piston in this rifle is very quiet, which makes the ASP20 the quietest spring-piston airgun at this power level. 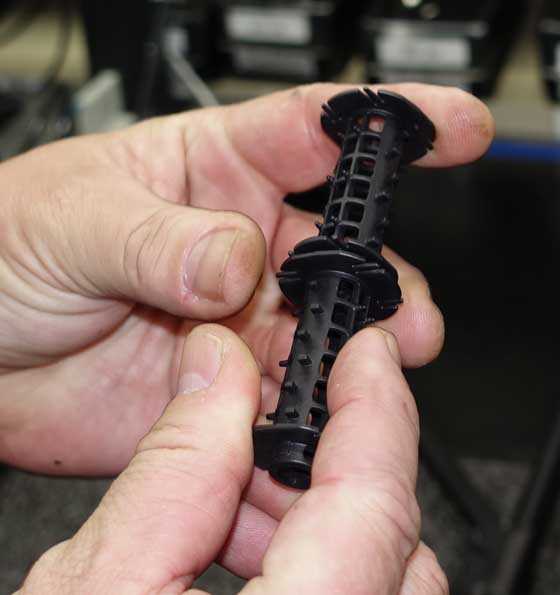 These spools are connected in line inside the silencer. 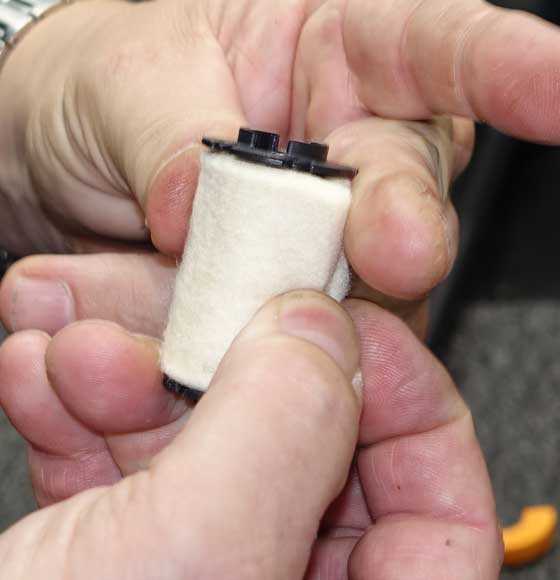 Each spool is wrapped with a felt pad.

Reader Red Beard Forge said the following about the silencer.

“Hi B.B. is the silencer removable? I am really intrigued by this gun but living in Canada any silencer is considered a prohibited device. If the silencer can be removed entirely or if the baffles inside could be removed it would be much easier to get one of these rifles into the great white north and comply with our far more restrictive laws on airguns (all airguns are considered firearms, but the licensing requirements are waived if the velocity is under 500 fps, so the legislative loophole that allows silencers on airguns in the states doesn’t work up here).

The power issue is less of a problem as most Canadians involved in shooting sports also have a firearms license. I have personally imported a high power air rifle from the states and had no problems whatsoever. I did it in person at a border crossing. I just showed them the specs of the rifle and my firearm license and they sent me on my way after checking the computer system to make sure that the model I was importing was not prohibited in Canada.”

I can tell you that the silencer is not made to disassemble, so Sig would have to build rifles without the silencer’s guts. They might also have to alert the RCMP they were doing that for the rifle to be accepted in Canada. I have no idea if they plan to do that, but I can tell you they are considering it, because Sig never misses a beat when it comes to marketing.

Ed Schultz called me the day before Thanksgiving last week to ask if I had received my rifle and how did I like it so far. As we talked he said I might want to clean the barrel early on and see what that does for accuracy. He said some guns respond to a barrel cleaning and others don’t seem to.

He said to clean it with a bore brush and patches but to not go as far as to use JB Non-Embedding Bore Cleaning Compound. He said I might see some soot on patches if I cleaned early on. Or I could just keep shooting and eventually the pellets would clean the bore themselves. I will keep that in mind when we get to the accuracy test.

Besides the rifle, Sig packs some tools for your use. There are a screwdriver and an Allen wrench to adjust the trigger, and in my case, since the rifle came with a scope I got the Torx wrench for the screws on the rings. I got something more with the scope that I will now discuss. 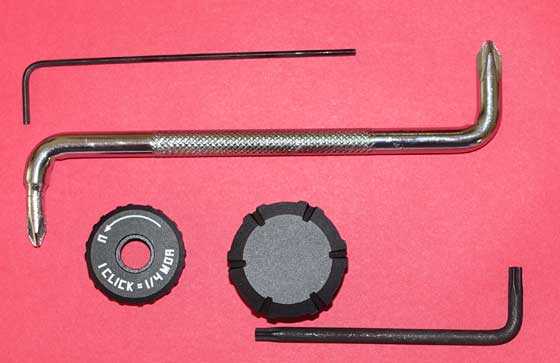 The tools for the rifle and for the scope came in the box. Sig even bent the trigger adjustment screwdriver so you can adjust the trigger with the scope mounted! The scope knob and cap and the Torx wrench at the bottom are for the Whiskey3 (see text).

As mentioned in Part 1, my rifle came with the Whiskey3 ASP 4-12X44 scope mounted. This scope is made for the ASP20 and does something airgunners have waited a long time to see. It is ballistically matched to certain pellets, allowing the shooter to just dial the distance to the target and the pellet will always strike at the intersection of the crosshairs. 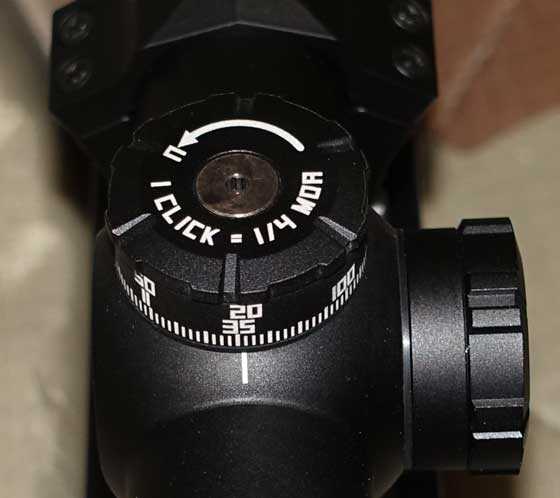 The elevation turret is calibrated in yards. Note that 20 yards and 35 yards are at the same setting. I have been writing that for 20 years and now we see it graphically. The same adjustment covers all shots from 20 through 35 yards.

The vertical crosshair adjustment is calibrated in yards to the target rather than just having simple index marks. Once you have sighted in with the right pellet, just dial the turret to the distance to your target and put the crosshairs on what you want to hit. I tried it when I shot the rifle at Sig this past July and my rifle was dead on. I started shooting at 10 yards and was dead on target. Then I moved to 35 yards, adjusted the scope turret and was dead on again. Then I shifted to 50 yards, adjusted the scope and put the pellet through what I was aiming at. Ed Schultz was watching my target through a spotting scope, and, when I shot at 50 yards and hit what I was aiming at, I wanted to go again. He said he would spot me, so I fired at the pellet hole. This was on a large Shoot-N-C target that was clean, so wherever the pellet hit would be visible. Ed was not able to see the pellet hole grow! Either I aimed off the target entirely or my second pellet went through the first hole!

The pellet the scope is calibrated to is Sig’s Crux Ballistic Alloy dome. But I found them hard to chamber, so I switched to JSB Exact Jumbo domes and they were the ones I used to shoot the targets. So I know which pellet to test in my rifle!

Can the scope be used without the ranging system?

What If you don’t want to use the ranging system of the Whiskey3, or what if it doesn’t match the trajectory of the pellet you want to shoot? Sig sends you a standard MOI adjustment knob (see the picture of the tools, above) that replaces the yardage knob. The scope is calibrated in 1/4 MOA clicks, so the switch is not difficult.

The scope adjusts for parallax down to 7 yards and out to infinity. The index marks on the objective bell from 10 yards to 50 yards occupy half the circumference of the bell, so there is some range finding capability for Hunter field target, though 12 power doesn’t give a lot of resolution. All things considered, the Whiskey3 is a well-thought-out airgun scope.

I will end the description here and get into velocity testing next time. This promises to be a great air rifle and scope combination! 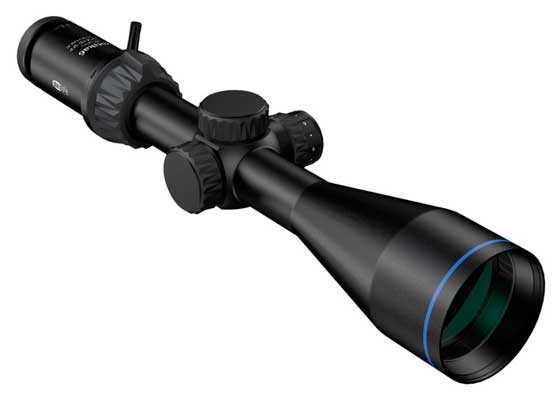