Today’s report is written by reader Benji-Don. This is Part 1 of his 2-part report on modifying the Crosman 13XX air pistol to turn it into a rifle.

And now, over to you, Benji-Don.

History
My plan from the beginning was build another air rifle as accurate as the Crosman 1322 pistol conversion I gave to my friend Jim. The key to its success in my opinion was the Benjamin Maximus barrel. I had two barrels for my new Crosman 1377 airgun so I figured I would not have any problems making another rifle just as accurate as the one I gave away.

This gun started off as a 1377 where my old one started off as a 1322 I don’t think it makes any difference in the end. Once the breech and barrel are converted to .22 caliber, the rest of the airgun is the same. I will list my work on the gun in chronological order as best I can remember.

Basic conversion
I installed a Crosman 1399 shoulder stock and .22 caliber steel breech along with a .22 caliber Benjamin Maximus Hunter barrel. These modifications are the basics of the conversion from a pistol to a carbine. Well the barrel is a little long to call it a carbine. I did polish the crown and leade on the Maximus barrel with a Dremel felt polishing tip and medium automotive polishing compound.

Scope
I then installed an Athelon Optics 8-34X56 Argos BTR Tactical Rifle Scope. I used UTG 30mm Rings, High, 3/8″ dovetail. I agree with Chris USA it is a bit of overkill. At least I can’t blame the accuracy on the scope, or can I?

Open sights are also a good option as the gun has a long sight radius. The barrel weight and peep sight from the Crosman 2300S pistol would make a good setup.

Pump pivot pin
A solid pin is far stiffer, stronger and wears better on the linkage than the original roll pin. I made a pump pivot pin from a 3/16 inch drill bit. I used a Dremel cutting blade to cut the drill bit to length. I then put the pin in my drill press and cut grooves in each end for “C” clips to hold it in place. I used the Dremel with the cutting blade to cut the grooves while spinning the pin in the drill press.

Note: The Crosman part # 2220-103 “Assy, Grip Frame” benefit might be a better deal and it should be a bolt-on assembly. I did not try to go this route so cannot guarantee the fit. It is the same assembly from the Crosman Silhouette PCP pistol, same part number.

Hammer and hammer spring
To cock the hammer when using the Marauder pistol trigger parts you need to hold the trigger back. Otherwise the sear locks into the groove in the stock hammer. The hammer for the Crosman Silhouette pistol may solve this issue; I have not tried it and don’t know if it is the same diameter. With the grove in the stock hammer you can put the gun on half cock and pump it with a light valve spring; so there is some benefit. Otherwise with the light valve spring it needs to be cocked or halfcocked to allow the exhaust valve to seal for pumping.

This gun was randomly getting valve lock with less pumps than normal — somewhere around 6 pumps. I added about 3/8ths inch of preload on the hammer spring by putting a plug of a 3/16 inch steel dowel in the tube cap. I put a new hammer in the gun and the erratic velocity and valve lock was reduced but not eliminated.

Eventually I broke down and ordered a metal barrel band/pivot pin bracket from GMAC Custom Parts Ltd. in the UK. That not only made the gun more accurate it also made the pumping assembly more rigid. The pump was able to pump more air per pump with the metal pump bracket.

When I ordered the barrel band I also ordered a brass safety pin from GMAC. That eliminated all of the plastic parts I am aware of.

Stock
At this point in the build, Vana2 came out with his DIY custom stock blog report and I could not resist building a stock and pump handle.

I filled the lower grip frame with aluminum plates to match the outer thickness of the frame. I JB-welded plates and frame together to provide a more solid attachment for the stock. With the thickness of plate I was using, the right side of the frame required two layers and the left side, one. I also added an additional screw on each side of the stock near the base of the pistol grip. The stock single screw on each side of the pistol grip relies on friction and some nubs in the grip that do not provide much resistance to torque when pumping. With the additional screws the stock is rock-solid.

To make the stock I used three pieces of Douglas Fir laminated together. The wood was 80+ year old drawer fronts from our kitchen. It had a nice tight grain that is hard to find nowadays. It was easier for me to make the cut out for the grip frame by making a center piece of wood the same thickness as the frame and then laminate two sides on to make the stock. I think that is the best way to go for this gun. Cutting out the grip frame inside of a solid piece of wood would be a real challenge for me. The stock is not a beauty but it is solid and works well. I added a stop on the stock so it sets in my gun rest at the same location for every shot. 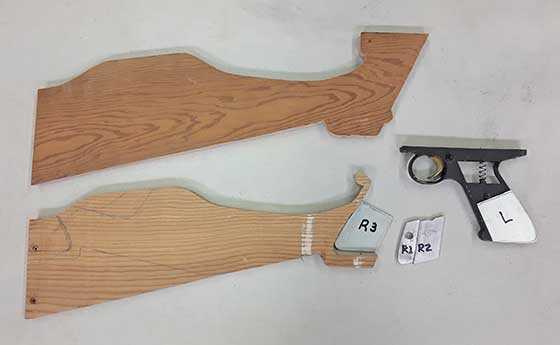 The center and left layer of the stock and the aluminum plates for the grip frame.

Pump handle
I made the pump handle out of two pieces of the same wood laminated together. To mill the handle out for the pump lever I made a router table which I mounted on the side of my table saw. That allowed me to use the table saw rip fence with the router. To start and stop the milling/routing I clamped two stops on the rip fence, one to set the start of cut and one to end the cut. I then could accurately run the pump handle between the two stops. One notch needed a sloping cut so I added a wood ramp at that angle clamped to the fence. The pump handle then rode up the ramp as it was pushed between the start and stop blocks.

This poor man’s milling process should work for quite a few different gunstocks. It is not hard to match the action and barrel shapes with the right router bits. Router bits come in all shapes and sizes. Half circle router bits make it easy to route out the groove for the barrel or tube. 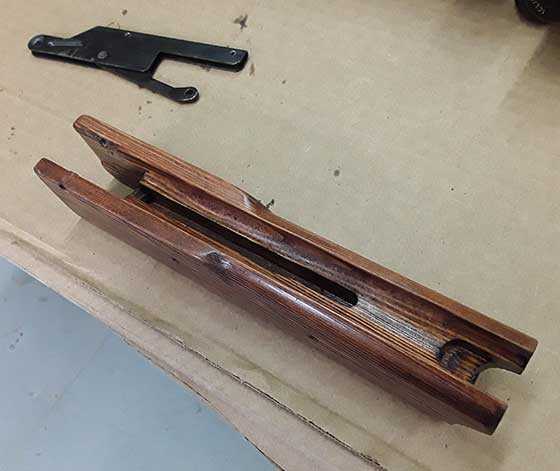 The pump handle and part of the linkage that fits in the handle.

Valve
In my previous modifications to 1377 and 1322 guns I did nothing or very little to the valves and had no issues. I was very satisfied with the performance of the guns.

This gun had unacceptable valve lock from the beginning. What I am calling valve lock in this case is partial valve lock. That is air left in the valve after the shot is taken. The gun fires but with a lower velocity. This is common in many multi-pump airguns and usually is not significant. Valve lock can be affected by the pellet and pellet weight, but in this case the pellet was a small factor.

To rectify the problem, I replaced the valve spring with an ultralight valve spring. The ultralight spring did make a huge difference. The pumping effort for the first 3 or 4 pumps were almost as light as the first pump. Once the valve pressure builds and the maximum pumping force shifts past the force to open the valve spring makes little difference in the pumping force. But I was still getting irregular pellet velocities. I think the valve was not closing fast enough on the first few pumps so less air was pumped. I was also getting partial valve lock at around 10 pumps. At this point I changed to a light valve spring that took care of the slow closing valve in the first few pumps and gave more consistent velocities for the first eight or ten pumps. I was still getting partial valve lock though.

New valve and piston
At this point I replaced the valve and piston. I had not tried a custom valve and piston before and decided this would be a good opportunity to see what difference they make in the guns performance. I ordered a flat top piston and valve from Peter Nollan on eBay. It is not cheap but well worth it in my opinion. It has a piston that’s adjustable while in the gun, so the dead space can easily be minimized. The valve has increased volume and a larger and angled exhaust port.

With the new valve in place, I tried the same three springs and ended up using my light spring. The gun now dumps all the air when fired – even tested to 15 pumps which is the most I have tried so far. Both the very light spring and the stock spring did not seem to close the valve fast enough when pulling the piston back for the next pump and thus did not give as high velocities per pump.

The piston rod can be adjusted while in the gun!

Up next
Finally we are at the end of the long trail I went down with this gun and we can move on to the next part — performance.