During the 1960s, spring-piston target air rifles reached their high water mark. There was the Anschutz model 250, the FWB model 150/300, the Weihrauch HW 55 and, in 1963, the Walther LGV joined the fun. The LGV was the last in a long line of target breakbarrel rifles from Walther that started in the 1950s with the LG 51.

The immediate predecessor of the LGV, the Walther LG 55, is well-known as a fine European club gun. The LGV took that one step farther — the final step for recoiling Walther target air rifles. Although it’s a recoiling spring-piston rifle, the LGV is so smooth and heavy that it is almost recoilless. It was produced in one form or another from 1963 until 1972.

There are several different versions of LGVs, and mine is the first model called the Olympia that has rounded corners on the wood. I owned another Olympia LGV years ago that had a matte finish on all the barrel jacket to cut the reflection, but this current one is probably an older model that has all deeply polished metal finished in a deep black oxide. The polish is fully the equal of a Whiscombe or a Colt Python with the royal blue finish.

The forearm contains a lead weight to make the rifle decidedly muzzle-heavy, as target rifles are supposed to be. The rifle weighs 10.5 lbs., or just about one pound more than a 1903 bolt-action Springfield battle rifle. It’s very muzzle-heavy, not only from the lead weight in the stock but also from the heavy steel jacket that surrounds the barrel. 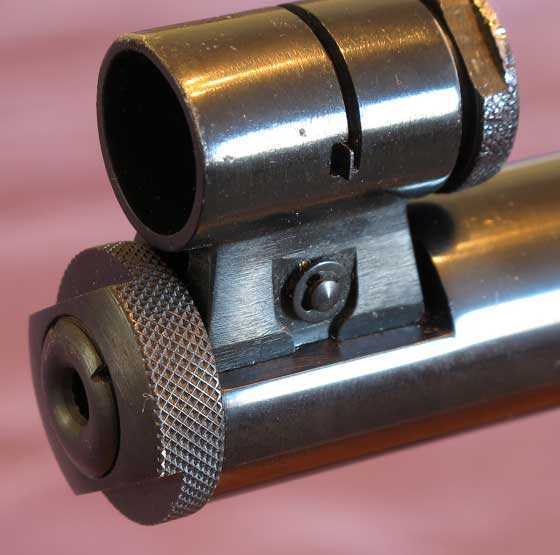 The heavy jacket around the barrel is for added weight up front. A large nut holds it tight to the barrel.

Casual observers will spot the barrel latch immediately. Like Weihrauch’s HW 55 target rifle, Walther provided the LGV with a special latch to positively lock the heavy barrel closed. The LGV was the only breakbarrel target rifle Walther did this for. The LG 55, which is quite similar in size and power, does not have a barrel latch. 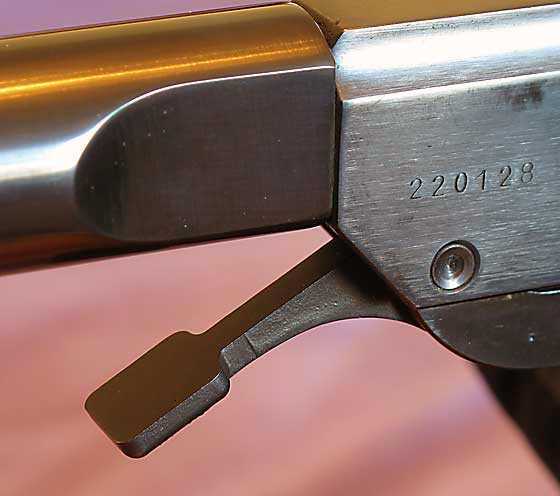 The barrel latch is easy to reach during cocking. It locks the barrel tight!

To compliment the latch, the baseblock has two hardened steel pins, one on each side of the block, that eliminate any possibility of sideways wobble in the barrel. Remember the problems I’m having in this area with the Beeman C1? In combination with the barrel latch, these pins make a vault-like rigid joint when the barrel comes to the closed position. Like the doors on a Mercedes, the barrel closes with the quietest of clicks that mask the ultra-rigid lockup. The Sig ASP20 with its keystone breech is a modern equivalent that doesn’t need a barrel lock because of how it is designed, but this LGV existed a half-century earlier. 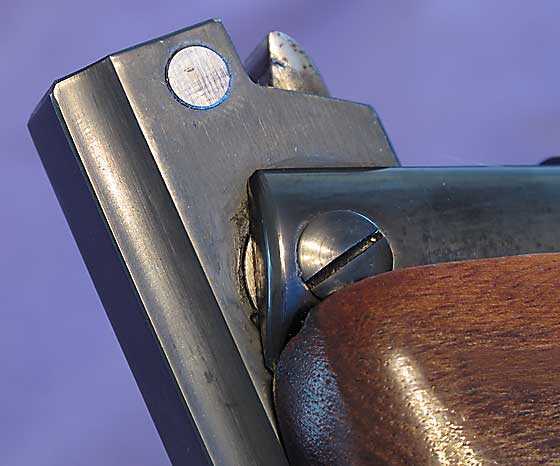 A hardened steel pin on either side of the baseblock keeps the side play of the barrel to a minimum.

Cocking effort on the LGV Olympia is legendary. It’s one of the few adult model breakbarrels to cock at less than 12 lbs. effort. This particular rifle may cock a little harder, but it’s still on the silly side of trivial. I will record it for you when I test the velocity in Part 2.

You’ll notice that the grip is heavily stippled to grab your hand during a match. These rifles were shot from the offhand position only, so all the design features stress that position over all others. 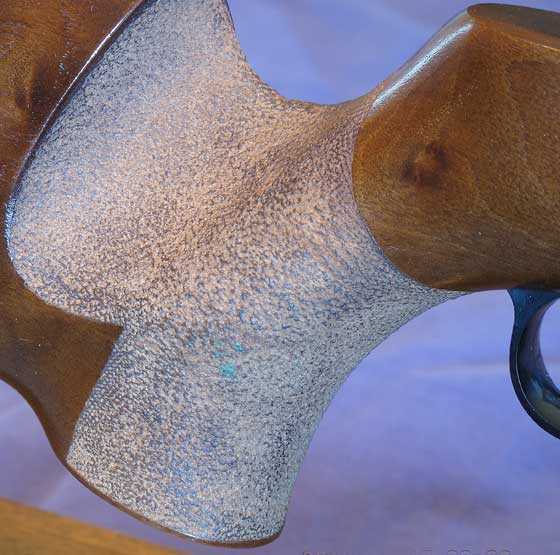 The pistol grip is deeply stippled for the best grip.

The curved buttpad is rubber and adjusts both up and down. The trigger is a fine target trigger, although it is of 1960s technology and not the current day. It’s two-stage and breaks at 11 oz. And, of course, it’s adjustable. Naturally I will test it for you.

The stock is figured walnut with a reddish-brown finish. It’s very full and robust, yet the forearm has no checkering, stippling or even finger grooves. It seems almost informal compared to the other contemporary target rifles. The Olympia was not intended to shoot in World Cup competition. That honor was reserved for the LGV Spezial and the UIT models. But this rifle has both the best features of the Olympia — the walnut stock and the adjustable buttplate. Blue Book says that adds 30 percent to the value.

The front and rear sights are target-grade and identical to those found on the LG 55. In the front, a globe accepts standard inserts; in the rear, Walther’s own proprietary aperture target sight prevails. The rear sight rail allows for some adjustment of eye relief, though the rear sight has to lock down in one of the half-round cross slots on top of the receiver. 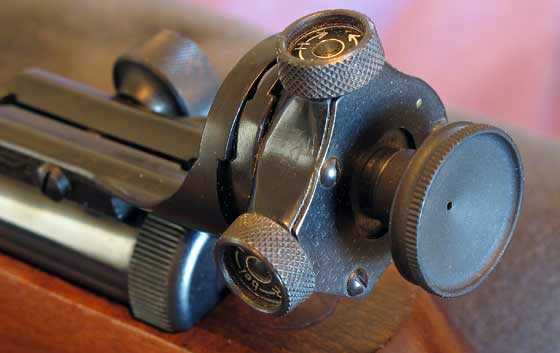 The rear peep sight is the same one found on a Walther LG55 target rifle. When something works, don’t change it!

I’m not a target rifle shooter, but I must say that this rifle holds steadier than any other breakbarrel rifle in my collection. Even my Weihrauch HW 55 CM was no steadier, and that was the very best that Weihrauch ever made! My FWB 300S is probably steadier but of all my breakbarrel target rifles, this one is the steadiest.

I’ve written about this rifle several times over the years, but it dawned on me that there are better target pellets today than ever before. It is time to bring this old girl out of the closet and feed her some of the best pellets the world has ever seen. I can’t wait to see how she does! 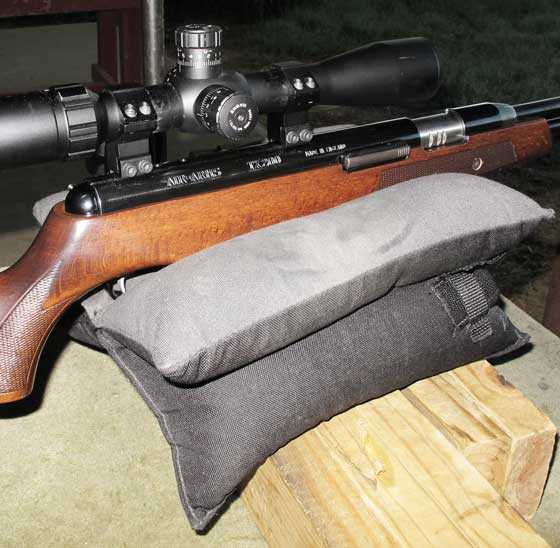