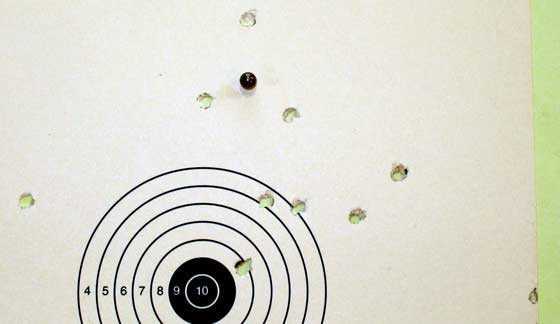 This military-looking BB gun is large and good-looking!

I hadn’t planned to do a fourth report on the Tell BB gun, but several readers’ comments and questions changed my mind. This will be a short report.

Reader Feinwerk said this: “It sounds and looks to me like the barrel may be fouled. Look at the nasty dark rings around the target holes. And when you described having to ram 5 of the larger sized lead balls down, after which others rolled freely, it strongly suggested to me that you cleared some debris from the bore. Any way to pull some patches through this barrel?”

I told him I would and that was the first thing I did. The tight spot I mentioned was about 1.5 inches down from the muzzle. And it was dirty. I felt the tight/dirty spot when I pushed a wire brush through the bore. But it only took a couple brush strokes before it was gone.

After running the brush through the bore several times I pushed a couple clean patches through. The first came out very dirty and the second was almost clean. Then I dropped a Marksman oversized BB through the shot tube and it took about two seconds to roll all the way through. The bore was now clean.

Reader Michael said this: “Obviously I’ll never again suggest the abnormally large variant of Marksman BBs because of what they did to your Pioneer BB76 gun, but what about Daisy Match Grade Avanti Precision Ground Shot?  They are bigger than the Daisy Premium Grade BBs and are more uniform as well.”

I paused on this one because I still haven’t removed that oversized BB from the Pioneer shot tube yet. I knew the Daisy Match Grade shot were too small from the tests I did in Part 3 with larger balls, but the Marksman BBs measure 0.176-inches and should fit fine. I dropped one into the Tell shot tube and it went to the bottom in a couple seconds. That made me include them in today’s test.

Reader RidgeRunner suggested that I rotate the shot tube in the gun to change the point of impact. I was surprised I hadn’t thought to do that before. That, I had to try. I rotated the shot tube through several positions before finding what I would call the best one. This I did with the 4.55mm lead balls that I knew were accurate in this gun.

This won’t be a biggie. I already know that the Tell isn’t a tackdriver. What I’m interested in finding out is what these changes do to that, if anything.

I shot from 5 meters, as before. The gun was rested on the UTG monopod and I was seated. I took a 6 o’clock hold on the bullseye.

Marksman BBs rolled all the way down the shot tube, so there was no need to push them in with a cleaning rod. But they went all over the place. Ten BBs landed in a “group” that measures 5.324-inches between centers. It’s pretty bad!

The Tell gun threw 10 Marksman BBs into this 5.324-inch group at 5 meters. I’m not using the dime today, because these groups are too big. Notice the one BB that nicked the edge of the target paper on the lower right side.

For 9 shots I thought adjusting the shot tube had worked, but shot ten was different. I heard and felt the gun fire and then I heard the BB hit the target. It was a “bang — pop”, with a noticeable lag between firing and the ball hitting the target. Since the target was only 16 feet away, that means the ball was going quite slow. It did hit the paper in perfect alignment, left and right, but it landed almost three inches below the center of the 9-shot main group.

The 4.55mm lead ball did drop down and move left after I rotated the shot tube. Nine of the balls are in 2.13-inches at 5 meters, but the weak last shot opens the group to 4.523-inches between centers.

Well, the shot tube did need to be cleaned. So that was good. Marksman BBs don’t work, despite their size. And turning the shot tube to move the group also works very well.

But the Tell BB gun is still not an accurate airgun. So I’m forced to restate my opinion from Part 3. This test has taught us that this gun likes larger round balls, but very little else. It’s still hard to cock and not that fun to shoot because of the lack of accuracy.

But at least I did what you readers wanted me to and you got to see the results. I guess this BB gun is more of a collectible than a shooter.