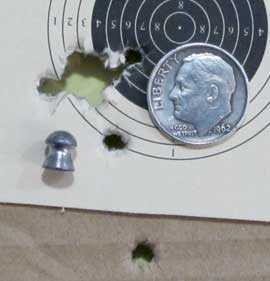 Today we look at the accuracy of the new Benjamin Marauder Semi-Auto (SAM) PCP air rifle. I’m sure GunFun1 will have lots to say about his SAM, too.

The SAM needs a scope so I looked around and found one that’s pretty much ideal. It’s a UTG 4-16X44 SWAT. Because it has an illuminated glass-etched reticle I was able to illumine just the crosshairs in the center and, because it’s a UTG, I didn’t have to settle for just green or red. I picked blue, so I can see it.

The scope was already mounted in 2-piece rings and since they are Weaver on the bottom I didn’t have to move them at all. That is one of the beauties of air rifles like the SAM that use the Mil Std 1913 Picatinney rail system. The slots on all guns are the same width apart, so a scope can hop from gun to gun without loosening the ring caps. The rear ring was also shimmed under the scope, so I had no worries about a drooping rifle when it came time to sight in.

I also raised the adjustable cheekpiece so my sighting eye was aligned with the scope. That adjustment works quite easily with a 2.5mm Allen wrench.

What’s the first pellet I will try in a Benjamin rifle? Why, a Crosman Premier, of course

I saved the sight-in target so I could show you what I’m talking about. The first pellet hit about 1.5 inches below the aim point. Then I backed up to 25 yards without adjusting the scope and the SAM put the remaining nine pellets into a 0.585-inch group at 25 yards.

The first pellet from 12 feet struck below the target paper. The other nine hit higher and to the left of center. Nine shots are in 0.585-inches at 25 yards.

Following this sight-in group I adjusted the windage to the right five clicks.

I will admit that the rifle fired before I was ready the first few times. However, because I knew to expect it, I was careful to hold the crosshair on the target all the time while squeezing the trigger. Eventually I got used to where the trigger broke and it wasn’t a surprise any longer.

I will come back to the Premier pellet for a second try, but the next pellet I tested was the JSB Exact Jumbo RS. This group moved a little to the right of center and all 10 pellets are in 0.521-inches at 25 yards. 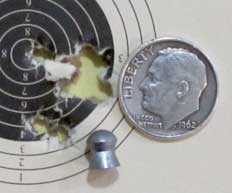 Here is the first 10-shot group. The SAM put 10 JSB Exact RS pellets in 0.521-inches at 25 yards. The smaller group below the main one holds three shots.

Shooting the SAM is fun!

I have to tell you there is a real urge to just pull that trigger as fast as I can! The SAM shoots as reliably as a Ruger 10-22 firearm. I bet GunFun1 has a lot to say about that! I wonder how the SAM would do in a Pyramyd Air Gunslynger match? Gunslynger is even a better name for this rifle.

Now for the real surprise. And, by surprise I mean the real shocker! The 16-grain dome from Air Arms is often the most accurate pellet in a PCP. Well, not in this SAM, it isn’t! Talk about a pattern instead of a group! Ten pellets went into 1.159-inches at 25 yards. Maybe they were hitting a baffle in the shroud? I looked but couldn’t see any place that had been hit. It was the biggest group in the test. 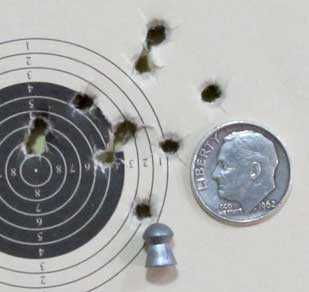 I felt I had to test Crosman Premiers a second time, now that I was on target at 25 yards. This time 10 shots went into 0.454-inches at 25 yards. The Premier is definitely a pellet the SAM likes. 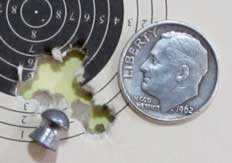 The last pellet I tried was the Beeman Kodiak that is no longer available, but is identical to the H&N Baracuda. Beeman never gave the head size of their pellets, but H&N does, so you have a choice. This is a much heavier pellet, so they dropped lower than the others I have tested. That’s another reason I left the target taped to the cardboard backer for the pictures.

Ten Kodiaks went into a 0.95-inch group. This is where a choice of head sizes would make for a more thorough test. Because, whatever these pellets are, the SAM doesn’t care for them. 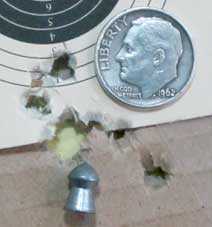 The Beeman Kodiak pellets made a 0.95-inch group at 25 yards.

First of all, the SAM fed all the rounds perfectly and without any hitch. Knowing that it is a semiautomatic is one reason why all the pellets tested were domes.

Next, the trigger does take some getting used to. But once you do it works just fine.

Finally, the SAM does seem a bit selective about the pellets that it likes. I wonder whether GunFun1 has noticed it? Just remember to always include Crosman Premiers, though, and you’ll have at least one pellet that works.

The UTG scope was a very good choice for the SAM. The lighted reticle made it easy to see the fine crosshair on the etched glass reticle.

Well, that’s the Benjamin SAM at 25 yards. It is a winner in all respects. It’s thrifty with air, very stable in velocity and today we learned that it is also accurate when the right pellets are selected. I guess the only thing left is to test it at 50 yards.