Today I mount a scope on the Benjamin 397, preparing for another round of accuracy tests. Let’s get started.

I don’t like it when a report begins with an oh, oh — do you? But today there was an oh, oh, and I decided to make some lemonade.  Let’s see what happened.

It’s been said of me more than once that I was missing a screw, but this time it turned out to be the Air Venturi Intermount kit that I was using to mount a scope to my 397 — the one with the pretty wood. I purchased the 397 from Pyramyd Air because I spent some money having reader Vana2 (Hank from Canada) make me that drop-dead gorgeous curly maple buttstock and forearm for it.

I hoped that a UTG scope ring screw would fit the intermount with the missing screw, but UTG screws are metric and slightly too small. But good old AirForce Airguns uses ‘Mercan-sized fasteners, and a cap screw from their adjustable mount fit this intermount well. It’s not a perfect fit, but the Picatinny rail base is tight and that’s all I care about for now.

Except, since I paid full retail for the 397 I also paid full price for the Intermount. And I’m glad I did because now I had a chance to test Pyramyd Air’s customer support.

A person named Crissy helped me out on a chat line, and once we established what had happened she sent me a new intermount. They don’t stock spare screws for those sorts of things because that might enlarge their inventory ten times (to inventory every size, thread count and length for just all the scope mounts, plus all the other little bits and pieces). I understand, but it still irritates me that it costs them so much for one screw. If I discover the screw size I might order several and return the extra mount to them complete. But for now, I have several blogs to write. I’ll start with the screw from the AirForce mount and swap it out when the other intermount arrives.

By the way, until the very end Crissy didn’t know who I was and even then I don’t think she knew that I write this blog.

The bottom line is — I was very satisfied with Pyramyd Air’s customer support. It solved my problem. And I went about it in this way instead of just contacting some folks at PA that I normally deal with because:

1. The intermount is mine, and
2. I wanted to see customer support for myself.

I can tell you this — if Harley Davidson had a customer support group as good as Pyramyd’s, they might sell a lot more motorcycles.

The intermount comes in two parts, comprised of five pieces. There are two bases that attach to the receiver of the Benjamin rifle, and a Picatinny rail that’s held on by two screws.

The bases clamp to the round receiver of the Benjamin 397. Note the distance these bases are apart. The screw holes mean they must always be this far apart.

The bases attach by clamping tight onto the receiver. Now, right there is a potential problem. The receiver is soldered to the lower tube just like the barrel. If the clamp legs extend too deep into the solder joint they will pry the receiver away from the lower tube. This is the same reason that you never, never attempt to remove the rear sight. It’s clamped tight to the barrel, and prying one of the legs open far enough to remove it has been known to break the solder joint more than once. 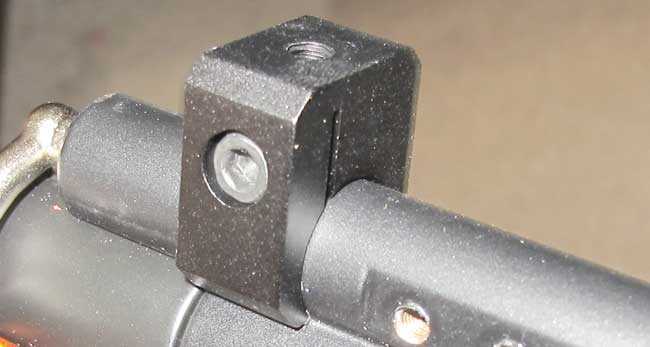 On close examination the intermount base doesn’t seem to be pushing against the solder, but I guess only time will tell for certain.

The Picatinny rail only fits one way

The Picatinny rail has two screw holes for the screws that hold it in position. Both bases have to either mount to the rear of the 397’s receiver or one base mounts forward of the loading port. Though the rail is longer than where the screw holes are, the screw holes determine where the bases must be.

The two holes in the intermount rail determine that the rail must be attached like this.

After the intermount rail is tight it’s time to mount the scope. I have thought long and hard about this and only one scope seemed right for the 397 — the shortest, smallest scope I own. Fortunately for me, it now comes with variable power of 3-12. Of course I’m talking about the Bug Buster 3-12X32.

The Bug Buster fits on the intermount right where I want it. 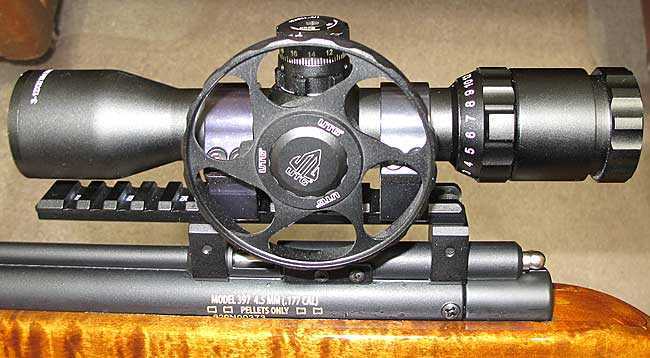 Here’s a look at the other side.

This little scope and rifle compliment each other perfectly. Although I don’t like scopes on multi-pumps, this new 397 pumps easy enough that I can hold it back by the pistol grip with my other hand while I’m pumping. I have pumped it five strokes with no problem.

A Bug Buster makes a nice little scope for the 397.

Of course the test is to shoot it for accuracy and that happens next time. I’ll skip 10 meters and go straight to 25 yards, now that I know the best pellet to shoot. After reading my earlier reports I see that seeing the sights was a problem for me. Perhaps a scope will clear things up.