This report is at the request of reader Jane Hansen, who wants to know the best pellets for the .22-caliber Air Venturi Seneca Eagle Claw lever action repeater. Jane is a fan of the powerful Korean smallbore repeaters, and I think she fancies this lever action.

I took my sweet time getting to this report! As you see this is Part 7, and I normally get to accuracy by Part 3. I last wrote about this rifle in early August. I have no idea of what happened that caused me to forget it except that when I mounted the scope I blew up and did everything wrong. That may have distracted me. So, after a lot of water has passed under the bridge, today is the day!

Read the past reports

The first thing I did before doing today’s test was read the past reports. I have done so much velocity testing with this rifle, plus so much time has passed that a refresher seemed necessary. It was a good thing I did because I forgot that the Eagle Claw magazine loads from the front, with the pellet loaded skirt first. I also see that there are two different ways to maintain velocity. One involves counting shots and adjusting the power wheel at certain places and the other is to just fill to 200 bar, dial the power all the way up and shoot 20 shots before refilling. I chose to do the latter for today’s test, since I wasn’t as familiar with the rifle as I would have liked.

The rifle has a UTG SWAT 8-32X56 scope mounted and, since it was on there, I took that to mean that I had also sighted it in. So I started today’s  test at 25 yards with no sight-in. I shot with the rifle rested on a sandbag rest and I shot 10-shot groups.

The first pellet tested was the 18.13-grain JSB Exact Jumbo Heavy dome.The first shot hit the target paper high and to the left of the aim point, but since they were all together  I continued to shoot until all 10 shots were in the group. The 10-shot group group measures 0.387-inches between centers. 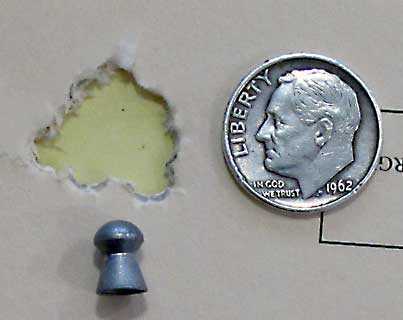 If this was my rifle and I wasn’t writing a report I would probably stick with this pellet and see what it can do. I wasn’t satisfied with where the group landed, but after shooting I adjusted the scope to the right and down. Since this scope adjusts in 1/8-inch clicks at 100 yards, and I needed to put in 2-1/2-inches of right adjustment and two inches of down, I adjusted the scope 70 clicks to the right and 64 clicks down. Because at 25 yards there have to be four times as many clicks to move the strike of the round the same amount as at 100 yards. I know my right click count is a little off, but seventy clicks is a lot!

Something really cool happened with the next group. Let me show the target and then let’s talk about it. 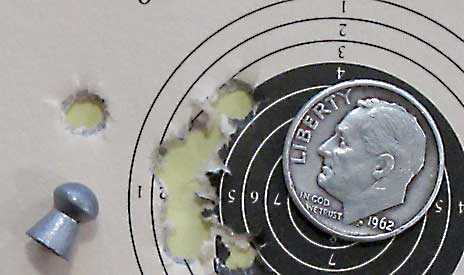 This group isn’t as small as the last one and yet I said something really cool happened. What was it?

See the lone shot on the left? That was the first shot after I adjusted the scope. This is a classic example of scope stiction, which means the reluctance of the scope to move as far as it should after adjustment. I’m not casting aspersions on the scope; this is just a teaching point. I have never had an example this clear before, so learn something from this target. After shooting this group I adjusted the scope eight more clicks to the right, and I bumped it several times to overcome any stiction.

This group is larger than the last one, but I’m going to move on to another pellet for now. I do have a bigger plan in mind that I’ll share in a bit.

Sooner or later someone is going to ask me to test the H&N hollowpoint slug in the Eagle Claw so here we go. This is the 23-grain slug that measures 0.218-inches in diameter. First of all, all the slugs fell into the magazine with no help. They are smaller in diameter than the skirts on the JSB Exact Jumbo Heavys, and of course, being slugs,  they have no skirts of their own.

This projectile landed a good half-inch lower on the target and a little to the right of the previous pellet. Ten pellets went into 0.703-inches between centers, with the first nine of them in 0.513-inches. I watched the very last pellet land above and to the right of the group. Because it was the last pellet I don’t think stiction caused it. There are so many more pellets to test that I don’t think this one is worth pursuing, but someone who wants to shoot slugs could make the opposite argument just as easily.

The hole that’s high and right was the last shot. I don’t think that one is stiction. I think it’s a flier for which I have no explanation. Ten slugs are in 0.703-inches with 9 in 0.513-inches at 25 yards.

The last pellet I tried today was the H&N Baracuda 18. This new lighter Baracuda is doing well in a lot of airguns, and in this Eagle Claw it made the smallest group of this test. Ten pellets went into 0.355-inches at 25 yards. So, Jane, this pellet is another one to try. 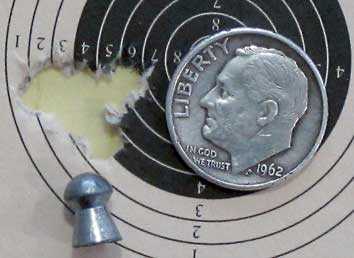 I have more to say about this pellet. First, they dropped into the magazine with no resistance, just like the slugs. I wondered whether that would produce fliers like the slugs, but you can see it didn’t.

Second, there were several shots that I wasn’t sure had fired. Several times I opened the lever to remove and look at the magazine to see if pellets were still firing, because after 6 shots I couldn’t see the group growing any larger. The scope was set on 32 power, so my view of the target was pretty good. The Baracuda 18 is definitely a pellet to consider for this rifle.

It seems I’m taking my time with this Seneca Eagle Claw repeater, so I plan to do at least one more 25-yard accuracy test. And then, once I know the best pellet(s), I plan to move back to 50 yards.

The Seneca Eagle Claw is stacking up quite nicely. For no good reason I seem to be testing it more thoroughly than most air rifles, but it seems I am getting more familiar with it as I go. I can’t wait to test it again. 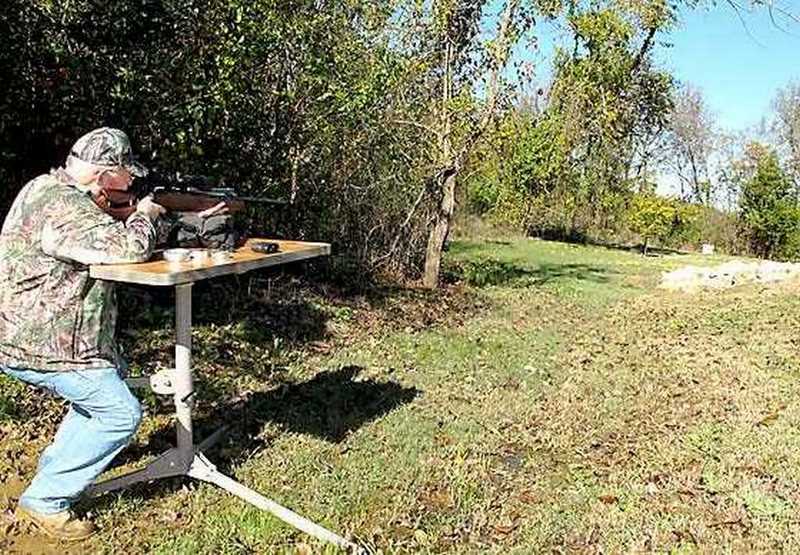