Today I shoot for accuracy with the TX200 Mark III, tuned with Tony Leach’s 22mm piston kit. This should be an interesting report.

I shot from 10 meters off a sandbag rest with the rifle rested directly on the bag. That’s pretty close to the target for a TX200, but I did the same thing in Part 4 when the rifle had the factory parts installed, so this will be a direct comparison. I don’t normally do comparisons, but I set this one up in Part 5 when I said:

“Now that the kit is installed and the trigger is adjusted to perfection, I am ready to continue accuracy testing. Of course this rifle is different than it was the last time we tested it for accuracy. But you may remember that this JSB dome gave the smallest 5-shot group at 10 meters. It was just 0.098-inches between centers. That will be hard to beat.”

Although I said that the JSB 8.44-grain pellet gave the smallest group in that test, it was actually the Air Arms 8.44-grain pellet. I discovered that when I read Part 4 again. It’s the same pellet as the JSB and it is made by JSB, but it’s made on dies that are owned by Air Arms, so there are differences. I’ll come back to that in a bit.

I have more to say about how the rifle was held in today’s test, but I’ll discuss that when we get there.

I installed the Meopta MeoPro Optika5 4-20X50 RD BDC3 scope on the TX200. All I did was snug it down in place. Beyond that nothing was done to the scope for the entire test. I did illuminate the central dot at the highest illumination for this entire test.

Since the scope has been off the rifle, I had to confirm the rifle was still sighted-in, so the first group was shot for that purpose. I ended up shooting 6 JSB Exact 8.44-grain pellets into a group that measures 0.174-inches between centers. That’s correct, the sight-in confirmation group earned a silver trime comparison coin! What a fantastic start!

Six JSB 8.44-grain pellets made a 0.174-inch group during sight-in confirmation. The scope was not adjusted in any way.

So the scope went back on the rifle and was fine. I never touched it after this.

The first 5-shot group with JSB 8.44-grain domes measures 0.074-inches between centers. The TSX200 is already shooting smaller groups than before!

You may not remember the sizes of all the comparison coins so here they are together.

How about that? The TX200 is already shooting smaller groups than it did with the factory tune. But that isn’t all. I could tell because of the rifle’s lack of movement that it could be even better than this!

Note to self: If I don’t touch the rifle much at all but just let it rest on the sandbag, the red illuminated dot in the scope won’t move that much and, with the trigger adjusted as it is, I can guarantee a great shot every time! This is a level of TX200 accuracy that I have never seen before!

The next group should be amazing! This time I concentrated on not allowing the illuminated dot to move around much at all. The next 5 shots went into a hole that never seemed to grow larger through the scope as I watched. Five shots are in 0.034-inches at 10 meters. I haven’t just shot a smaller group than in all of Part 4 — this group is just one-third the size of that previously smallest group!

Okay — now that I know I can do this at will, what’s next? How about shooting 10 pellets?

Ten JSB Exact 8.44-grain pellets went into 0.098-inches at 10 meters. I shot ten pellets into a group as small as the smallest 5-shot group previously! Guys — this just keeps getting better! This rifle is now so accurate that I know I could shoot the tip off an match at this distance —every time!

At this point I was feeling uncharacteristically cocky — like I could do this every time. This rifle is now phenomenal! Before today I was worried that I couldn’t put five shots into 0.098-inches again. Heck — I can do so much better than that!

So out came the Air Arms 8.44-grain pellets — the ones that are just like the JSBs only made on different dies. These have done even better than the JSBs in this rifle. This time I thought the group was going to be 0.0-inches because I really never saw it grow larger. But it did, just a little.

Five pellets went into 0.030-inches at 10 meters. This isn’t just the smallest group of this test. This is the smallest recorded 5-shot group I believe I have ever shot — in my life!

Yes, it is. However, I have shot plenty of 10-meter target rifles at hundreds of targets in this blog and never has one of them given me a group this small! By now you would think I would have lucked into at least one, but I haven’t. Yet I believe I can shoot groups like this one all the time with this rifle. Why! Because my TX200 Mark III is now perfectly calm. No it’s not as calm as a PCP, but yes, it is as smooth as I have ever seen a TX become.

What’s next is to back up to 25 yards and go again.

Never in all my years of tuning spring-piston rifles have I had a result like this. I have always maintained that a trigger doesn’t make an airgun more accurate and that a tuneup also doesn’t change the accuracy. Was I just proven wrong?

I can’t tell you guys what to do, despite what your wives say about me! All I know is this is what I did and this is what happened. 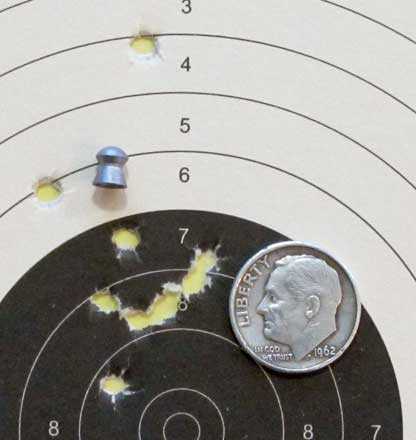 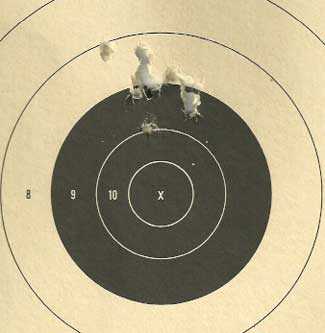