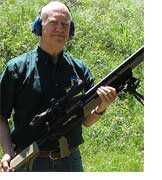 Tom Gaylord is known as The Godfather of Airguns™ and has been an airgunner for over a half-century, but it was the Beeman company in the 1970s that awoke a serious interest in airguns. Until then, all he knew were the inexpensive American airguns. Through the pages of the Beeman catalog, he learned about adult airguns for the first time.

Tom worked for three years as technical director at AirForce Airguns, the makers of the Talon, Condor, and Escape precharged air rifles. Today, he writes about airguns and firearms for various publications and websites. He also makes videos, and you’ll find short clips embedded in some of his artices on Pyramyd Air’s website.

Tom is a consultant to Pyramyd Air and writes the Airgun Academy blog (under the name of B.B. Pelletier).