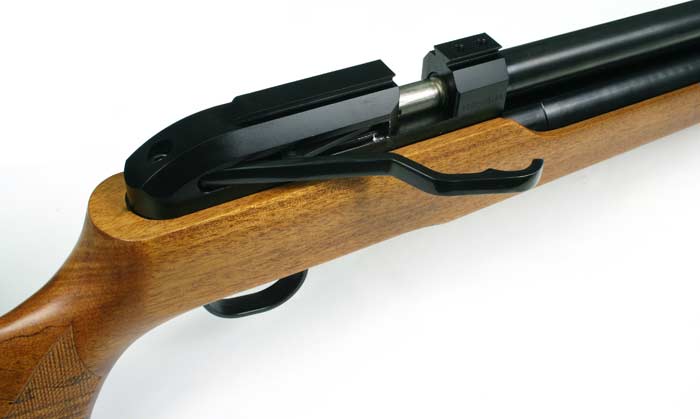 Over 192 ft-lbs! That's a serious hunting gun! This stunning precharged pneumatic rifle has what every airgunner wants: accuracy backed by truly daunting power. The Dragon Slayer 50 is made by ShinSung, a Korean company that knows what hunters really want in an airgun. After all, Koreans have been hunting with airguns for decades.

The power and accuracy of the Dragon Slayer 50 would have been enough to make airgunners happy, but they added a beautiful, well-balanced hardwood ambidextrous Monte Carlo stock (right-hand sidelever). Checkering on the pistol grip and forearm are another indication of the level of detail poured into this rifle's sculpted design.

Cock the rifle with the sidelever and insert a .50 caliber bullet in the mammoth loading trough. When you're out in the field, that giant loading area will make it easy to pop in another bullet when you want to get off a finishing shot. There aren't any sights, so you'll have to mount a scope on the 11mm rails.

The single air reservoir is located directly below the barrel and is filled with either a scuba tank, electric compressor or a hand pump. Put 3000 psi in the gun and get ready for some awesome power. With a 225-grain bullet, we got 192 ft-lbs of pummeling energy. A 200-grain bullet on a 3000 psi fill will sail downrange around 567 fps, while the tenth shot will go about 541 fps (approx. 2200 psi). Each gun is individual, and some guns may get lower velocity...or higher velocity.

Don't forget to click on the AMMO link to stock up on our swaged bullets. The ACCESSORIES link has a list of products to put air into your gun (scuba tanks, electric compressor and hand pumps), plus some scopes, night vision devices, paper targets and maintenance items.

Hello,first off i have had alot of air gun's and have spent lot's of money on them,But this (gun) has some amazing power.For example, when i inserted a 225 grain hollw point, i thought that it was jammed, so i said let's just shoot and see. To my disbelief, the gun pushed the bullet right where i was aiming.Unbelievable power. and if that's not enough then contact BIG BORE BOB'S that will get'cha around 300fpe.

this gun really love's the 178 grain's round ball's

all most near 100 percent, it make the strong impact that can crack one inn wood but not so smooth like my AR6 with 32 grain that can get smooth throw one inn wood. the air gun is sort than specification.

this gun should make with longer barrel and more power for medium game. it did not come with the barrel protection.

I would up the over-all power of this rifle .Ex:Push a 490 round ball to 800 FPS, with over 200 plus foot pounds. Know that would be something else.