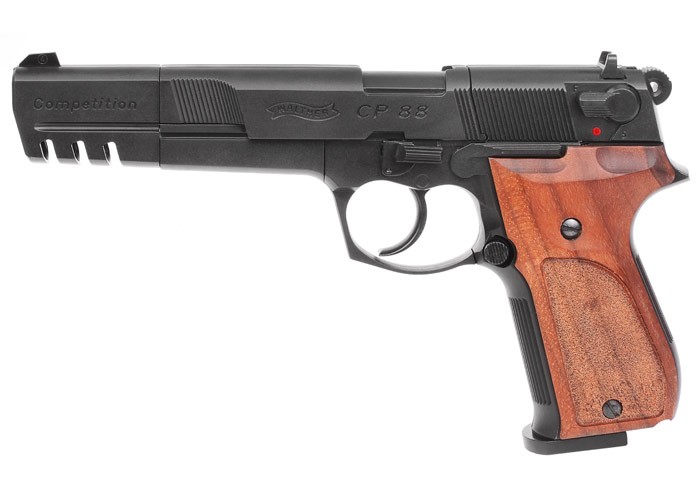 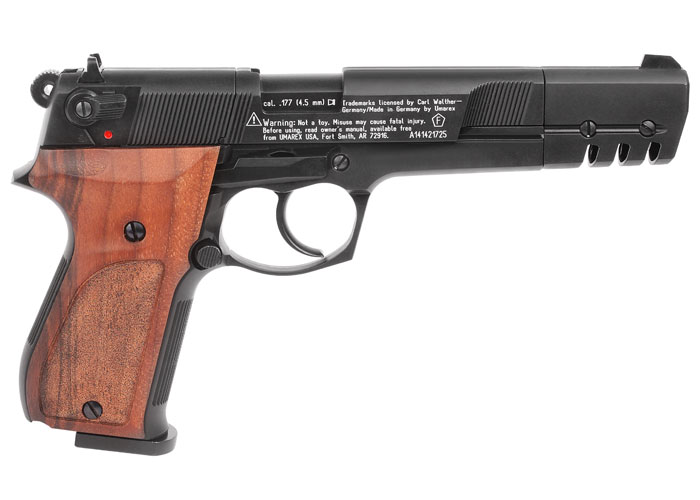 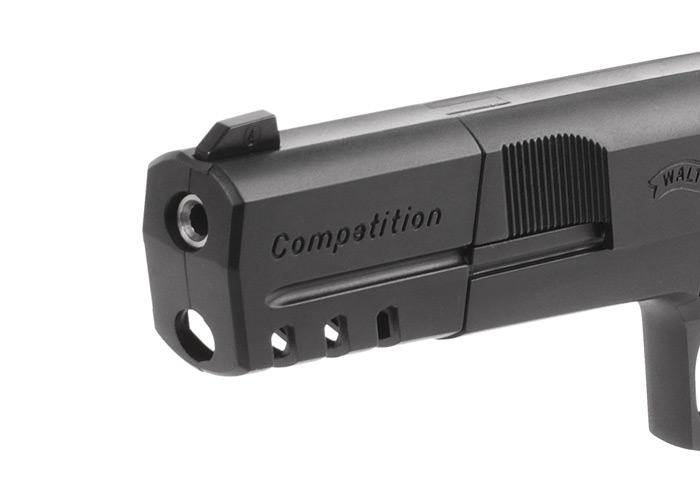 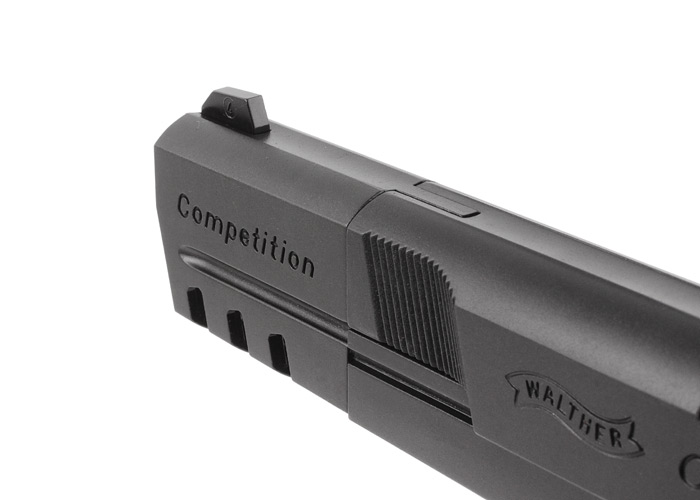 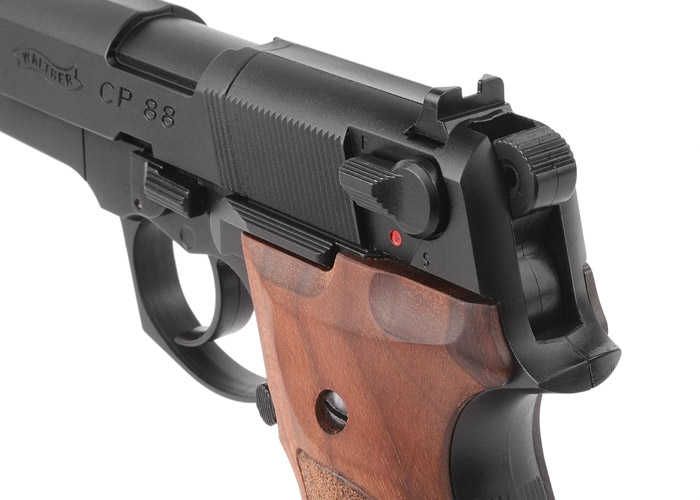 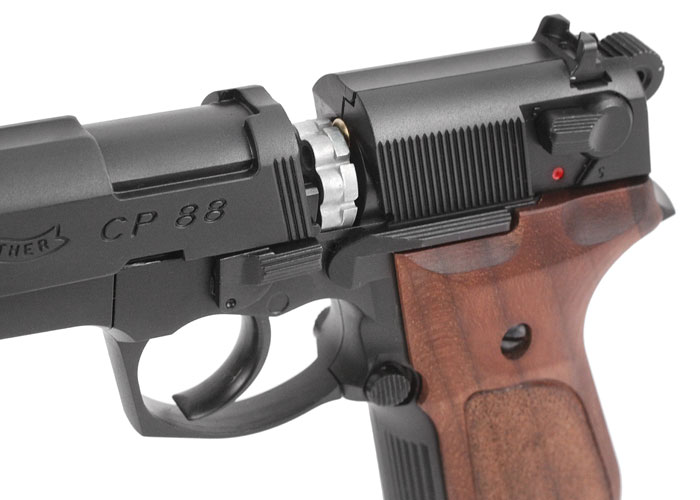 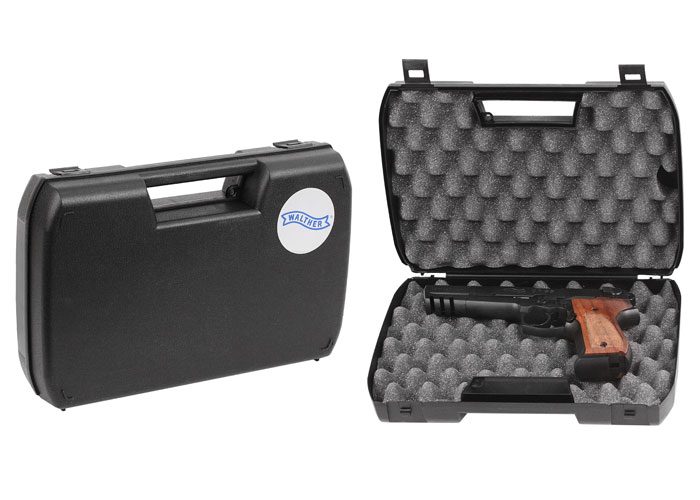 CP 88 BLUED ("Blued" is a term that means it was treated with black oxide. The result is a black finish.)
The Walther CP88 features a frame-mounted thumb safety, rifled steel barrel, rear sights are adjustable for windage, contoured checkered grips, serrated slide assembly all packaged in a foam lined hard side case.

Shipment will be delayed by 24 hours (or one business day) because our tech dept must install the wood grips.

A new generation of CO2 airguns! The original Walther design as well as the outstanding workmanship are impressive. This 8-shot double and single action repeater represents a giant leap forward in CO2 pistol technology because it's both fast and easy to reload with the convenient 8-shot rotary magazines that can be preloaded until you're ready to shoot. Due to the modular system the pistol can be used for various shooting activities. It is a popular gun for beginners and training purposes.

The white writing on the side. Seriously. It could be etched in and not so bright.

Couple things. Careful for magazines popping out when releasing the slide. sometimes the slide release button will go perpendicular to the slide, just have to push it back into place. Wood grips feel great, immediately treated them with linseed oil and fit remarkable well, installed with 0 issue. This is an expensive air pistol, but if you want to own well made pieces that add value to your collection and shoot well, this is hard to pass up.

i like the feel of this handgun, it feel real & solid, i did some few shots it seems off & need some adjustment, otherwise i think it's a good buy.

wish that their specially rails made for this handgun (not a plastic) that you can attach red dot/ scope.

i ordered this model $299 version with a wood grip & it was a back order @ that time then all of a sudden they shipped (though it says still back order on there website) the $209 version plastic grip with extra wood grip accessories? i wonder if there's any difference between $299 & 209 version except the wood grip? any thought?

I just received my CP88 Competition. Upon opening the case and handling the gun, i was extremely impressed, but it all came to and end when I started to shoot it on my indoor 10M range. The first problem I noted was that the front sight post was crooked. In addition, I noticed that the front barrel extension was off as well. There was a sight movement in it also. I tried tightening the two screws that hold it but they hardly moved. I then noted a lot of oil coming out of all the joints. I called Umarex and got their blessing on putting in a UltraAir lubricating CO2 for the first load. Shot 6 magazines. The spread was all over the place. Then I loaded an Umarex CO2. Still no better. Shot 8 magazines. Still all over the Gamo targets. The last disappointment was the trigger pull in single action. It felt like 15lbs! Sending it back to Pyramyd. May be I just got a bummer!

Check these out at the factory before they leave! Germany might want to tighten their quality control. It's still is a beautiful gun to hold. Mine had the wood grips. If you're going to spend $300 on an air pistol, it should operate like $300.

I should have had Pyramyd do their 10 for 10. There is always a back order on these, maybe Umarex is just pushing them out too fast. I have a 20 year old Crosman 357 that holds tighter groups!