This is the second part of Vince’s guest blog about the B3 air rifle he turned into a decent gun.

Notice that this is the type that’s engaged by default. It’s not put on SAFE by the lever being cocked. Rather, it’s put on FIRE when the lever is returned to the stow position.

Next comes the fun part — getting the spring out. I did it my way, which first involves tapping out the single pin with a punch or a phillips screwdriver slightly smaller in diameter. 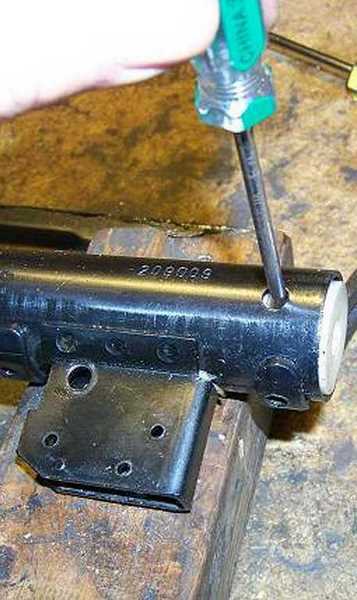 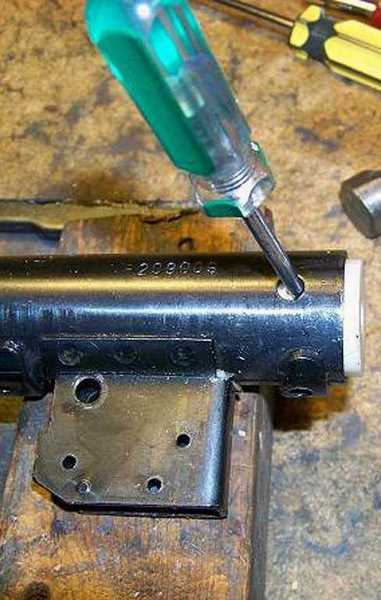 When the pin comes out all the way, the spring retainer jumps out a tiny bit but is safely retained by whatever you used to knock out the pin.

This may seem dangerous, but there’s little that can go wrong at this point. The retainer won’t even try to escape until the pin is all the way out, and that won’t happen until the punch is all the way in. Unless the spring is powerful enough to shear off the punch, everything is hunky-dory. So, don’t use toothpicks or bamboo skewers as a punch. 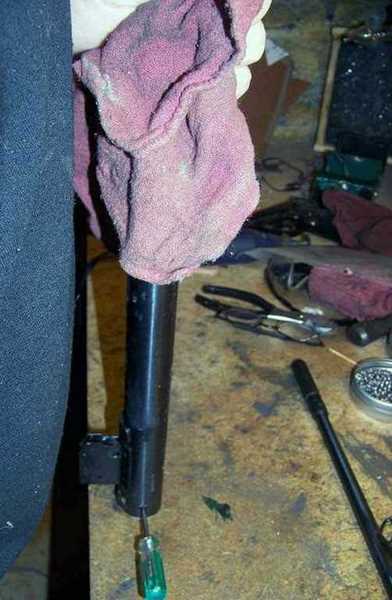 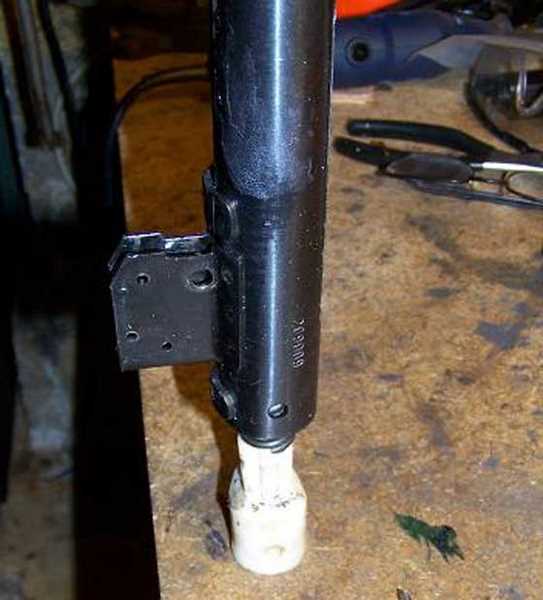 What I do is really very simple. I grasp the action with my left hand and hug it close. With my weight (and I’ve got lots of weight to spare!), I bear down on the action while feeling the punch that’s still holding everything together. When I feel the punch loosen up, I know that I’ve taken up the entire force of the spring and slip it out with no surprises. I use my right hand to help steady it, let ‘er up and it’s apart.

Now, I’m looking at the good, the bad and the ugly. The ugly is my own reflection in the spring tube. The bad is the spring retainer/rear guide. The good is everything else. I’m seeing acceptable condition in all the other parts. 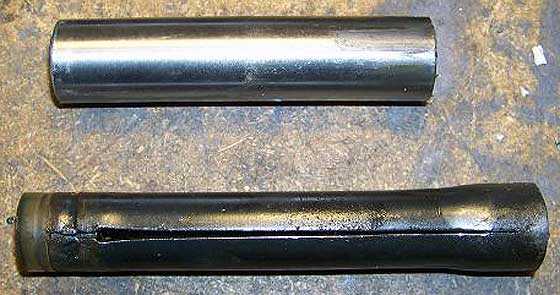 The piston seal is the standard Industry Brand bottom-feeder clip-on synthetic type, which is in remarkably good condition: 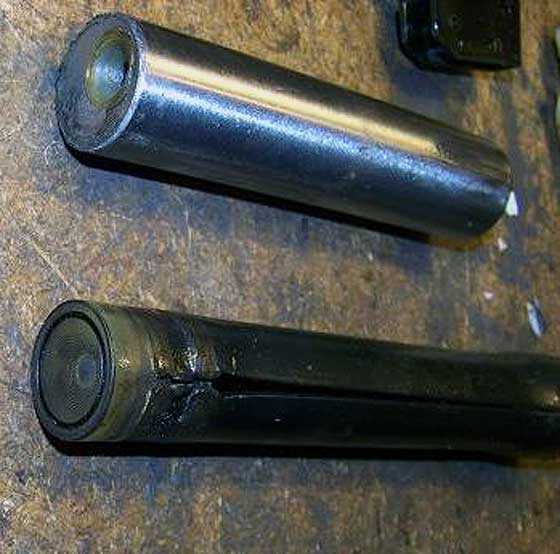 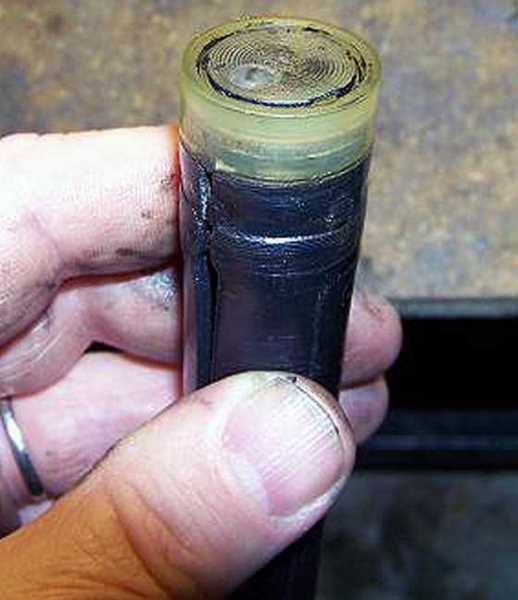 The original piston seal is in good shape and doesn’t need to be replaced.

Good thing, too, ’cause I don’t have laying around, and I SURE don’t plan on buying anything for this gun. That still leaves me with the whole rear guide/retainer issue.

This is what came out of the rifle.

I took some measurements. The overall length is about 4.5 inches, and the rear guide diameter is 12mm. And, no, .50 inches won’t fit inside the spring. the first thing I did was rummage around my boxes of miscellaneous parts, and I come across a Crosman Quest rear guide/retainer that looked like it might just be workable. 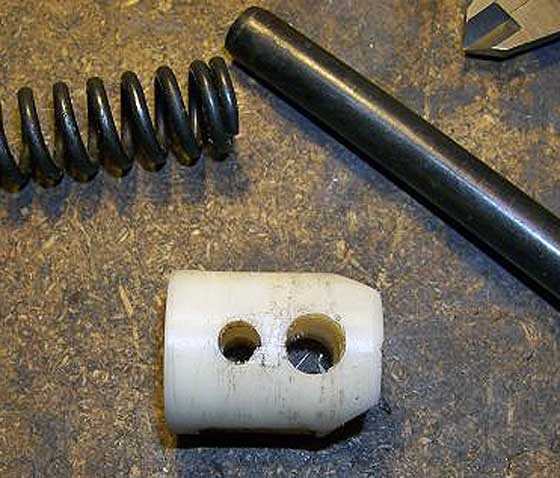 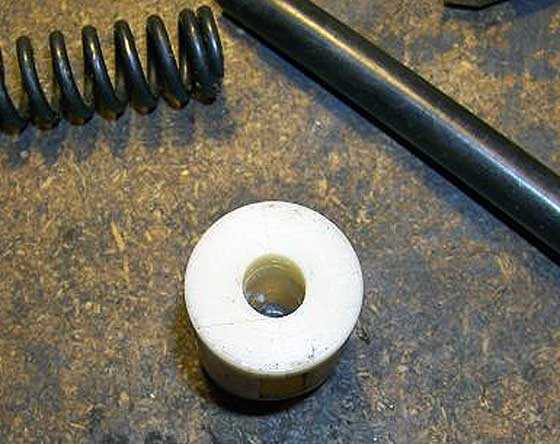 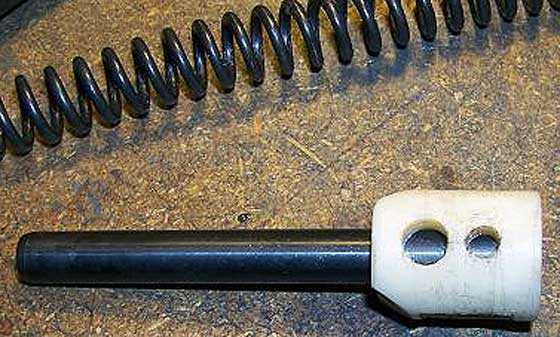 I hacked off the remaining vestiges of the smashed guide and bore a hole down the middle of it to accept the shank of the Crosman guide (first two pictures). I separated the Crosman guide from its retainer block, trimmed it to length and tapped it into the original retainer (last 3 images).

I still have the issue of the spring perch that spaces the rear of the spring and gives it a bearing surface. It appears that the original design had plastic EVERYTHING in this area, which yields a very short life expectancy.

I figured that I can take care of the spacing duties with a piece of CPVC pipe, which happens to fit over my new guide very nicely.

I cut it to length (approx. 26mm) and squared it up. I can’t let the spring actually seat on a plastic part (even if Shanghai can), so I dug up a rusty old lockwasher and refinished it. 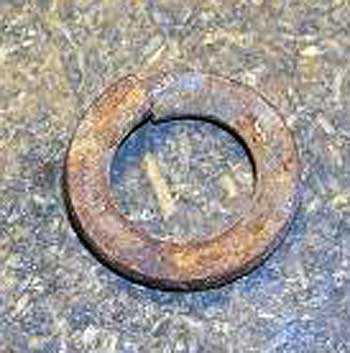 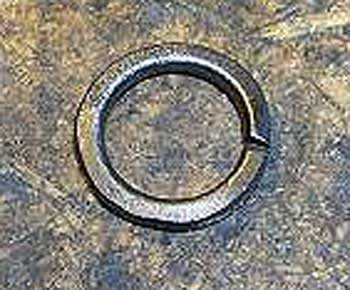 And after flattenning, cleaning and grinding to the proper dimensionsm I’ve got an almost-proper spring seat using this rehabbed lock washer.

As long as I was at it, I decided to really go all out and clean the barrel. This means using a .22 caliber brush and some Brownell’s J-B Non-Embedding Bore Cleaning Compound. Frankly, I’m wondering if the B3 is worth the additional $1.79 worth of material. But, hey, it’s Christmas, right…well, it was Christmas when I was doing this. The time of miracles?

After the barrel is clean, I goop up everything with moly goo and put it all back together. Now comes the fun part: Cocking it for the first time!

Perfectly uneventful, as it turned out, and it cocked like a cheap gun in decent working condition. Which is, by no means, universal for a B3. Firing the gun with Crosman Premiers showed velocities ranging from 399 fps to a little over 500. Not good.</p> <p>I don’t care about velocity. This is not a high-precision tune; all I care about is punching paper at 10 meters. So, off to the range to start making holes. One hole here, one over there and a third in Timbuktu. Pretty much the same sort of results B.B. was getting the last time he shot a B3. I’m a bit disgusted but not the least bit surprised when I decide, on a lark, to continue my pellet test from before.</p> <p><a href=”>Crosman Premier hollowpoints were up first. After three shots, I gave up. Next were “The Peak” Chinese pellets, which sometimes do well in lower-powered guns. Funny thing happened — 4 scattered shots, but 2 in the same hole. Next up were the Gamo Match, and I had 3 go into a surprisingly tight group with 2 opening it up.

Last pellet was the Daisy Precision-Max wadcutter, which is a very soft and mediocre pellet (especially in .22). Four shots went into a pretty tight group, with one about 1.5 inches away. I shot a sixth, and it went into the same place as the other four. If I throw out the flier, I’ve just shot a .40-inch group with my B3 and a $5 scope.

The next, oh, 100 shots or so, were spent chasing down tantalizing groups with agonizing fliers. One thing was certain — the B3 was getting better the more I shot it. The sound of the gun wasn’t changing at all, so I’m guessing the not-terribly-well-finished barrel is sensitive to seasoning. It got to the point where I started wondering about the scope, so I popped on a CenterPoint 4×32 I had laying around. 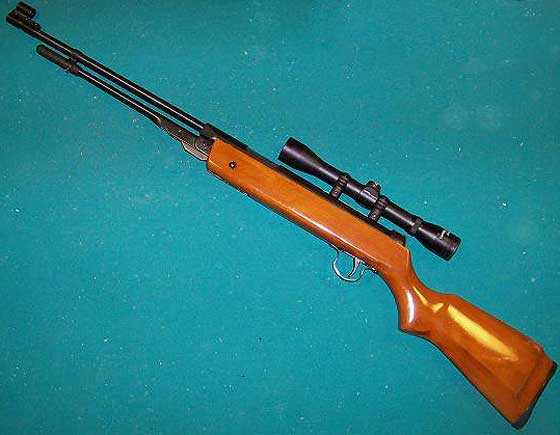 My rehabbed B3 and CenterPoint 4×32 scope.

I also switched back to Gamo Match pellets and found that things continued to improve. 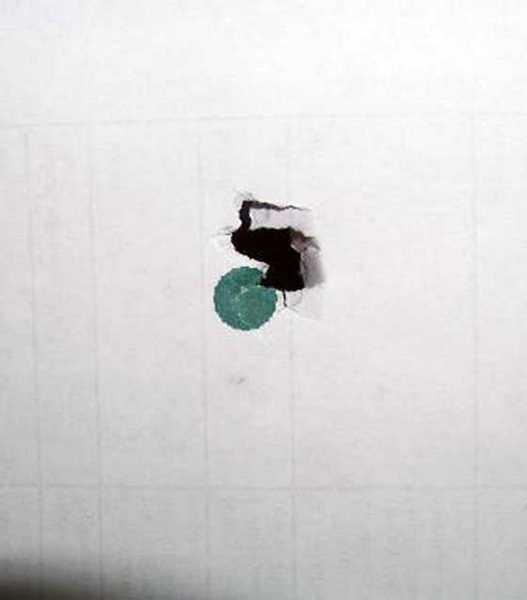 Gamo Match pellets plus the new scope, and this level of accuracy became pretty commonplace.

I got about a .50-inch group — with no flyers! — which is, oh, about a zillion times better than I imagined it would ever do. I also tried shooting the gun while resting it on a Pyramyd Air gel pad which it most certainly didn’t like. So, the B3 has the nerve to be somewhat hold sensitive. It’s a fair assumption that I could get better results if I really took the time to learn how to hold it and to deal with the still-annoying trigger — and if I tried more types of pellets.

But, I’m not going to bother. Why should I? Even with acceptable accuracy I’ve got other rifles that are far more pleasant to shoot, just as accurate or more so, and don’t threaten my fingers with amputation. Besides, all I wanted was a useable B3 in my collection, whether it ever actually gets used or not.

What does this say about the horrible quality of the B3? Hard to tell, frankly. Is quality control all over the place, but I got a good one while B.B. got a bad one? Or, is it just that the barrel needs a lot of cleaning and seasoning before it’s any good? Who knows?

The rest of the innards, while still being obviously from a cheap gun, really were made better than I expected. The only thing I can say with any certainty is that when a shooter claims to do well with one of these things, well…you never know. He just might be telling the truth!