This is part 3 of Vince’s disassembly and repair of the Falke model 90 I sent him several weeks ago. After this, we’ll start a new series with the range testing of the Falke, as Mac now has the gun.

Now that this mystery was solved (.177 pellets stuck in this .22 cal. rifle), I had to tend to the more mundane issue of that putrid piston seal. Even though the original seal was leather, I’ve got the idea that — like the Hakim — a modern Diana seal can be made to fit this gun. Measuring the bore confirms this, so I have to figure out how to adapt one to this piston.

First things first, though. I’ve got to remove that old leather seal, which means I have to remove that center screw. It doesn’t want to cooperate, and the beat-up screw head is only getting worse. There’s not much of a slot to engage a screwdriver, and I don’t want to mess up what little there is. I decided to remove the leather first — by destroying it. That way, I can grab the sides of the screwhead with something and loosen it.

Well, the screw still doesn’t want to come out. I suspect that it’s being retained by the pin circled in the following picture. Quite obviously has to be drilled. Once that’s done the screw spins out rather easily: 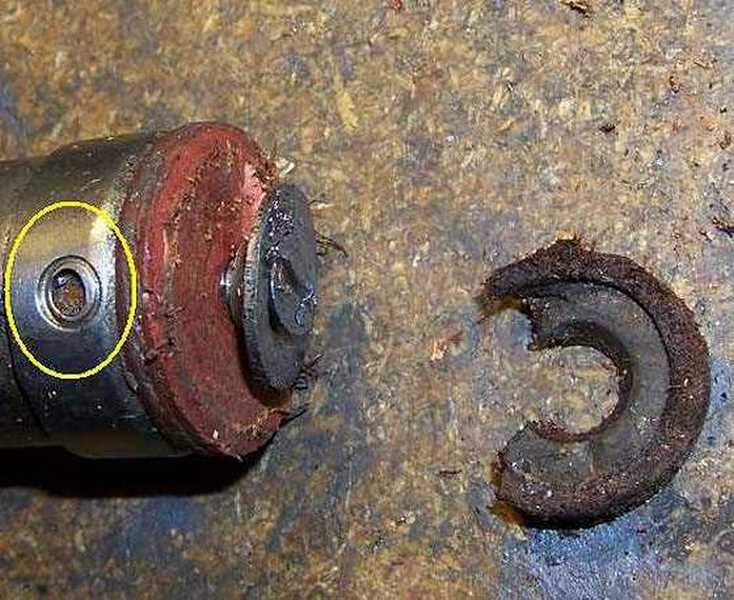 Even with a screw loose, it wouldn’t come out. 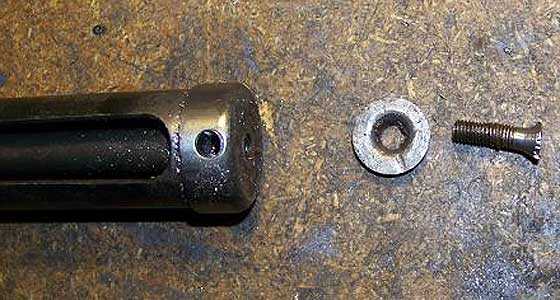 After some “coaxing,” the screw gave it up.

Next, I made a button adapter for the Diana seal. I’ve got some 1-inch nylon bar stock laying around (doesn’t everyone?), so I drilled a hole into one end (it doesn’t have to be perfectly centered or straight). 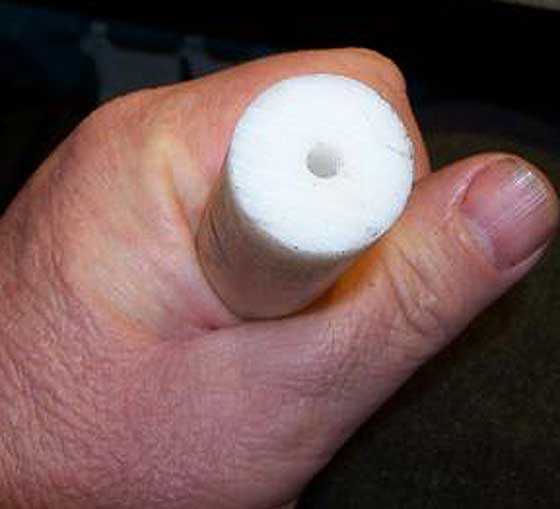 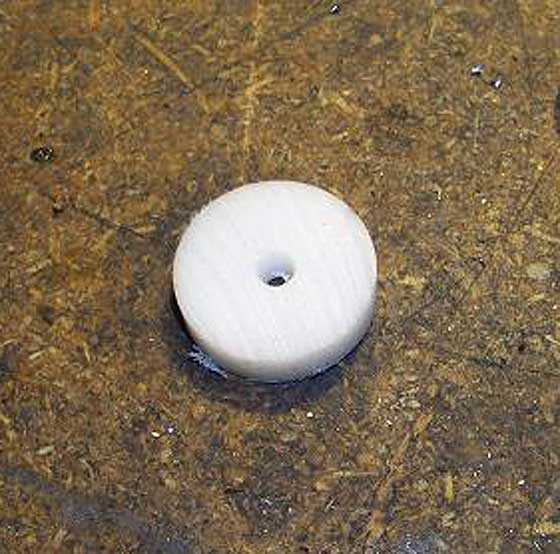 I drilled a hole in some spare 1-inch nylon bar stock and sliced off a section that’s the same thickness as the seal. 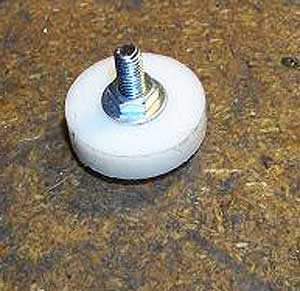 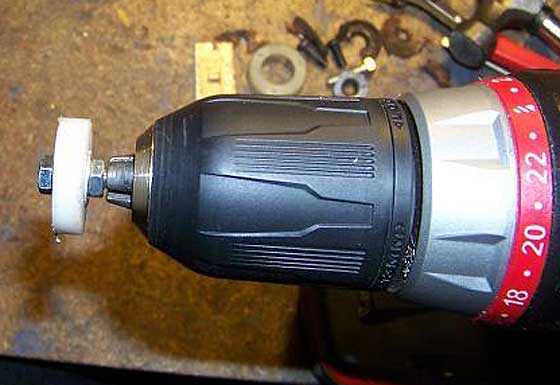 I installed a machine screw and nut through it and chucked it up in a drill. 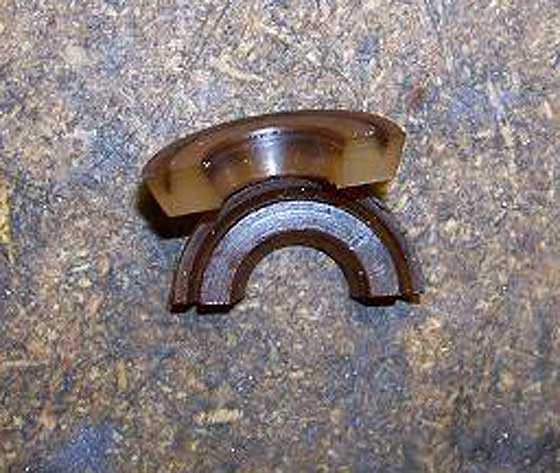 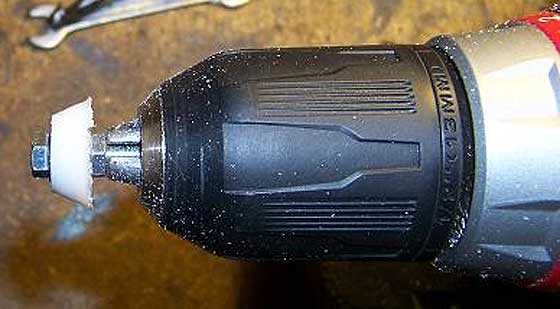 I sliced an old seal in half to give me an angle guide and used a bench grinder to shape the plastic button while spinning it in the drill. I fine tuned it until it’s just about a perfect fit.

Remember that pin I drilled out of the piston? Turns out that it was also securing the piston rod into the piston — after I removed it, the rod loosened up. Since it looks like we can’t do without it, I replaced it with a roll pin.

I used threadlocker on the center screw, so I’m NOT relying on the roll pin to secure it. I don’t want the pin interfering with its installation or removal. I threaded a 5mm bolt into the head of the piston as far as possible and then pressed in the roll pin until it bottomed on that bolt.

I ground down the head of the pin so it’s flush with the piston and forcibly removed the 5mm bolt (which was binding against that pin). I ran a tap down that hole to cut through any interference. The front of the piston is now ready to go.

I installed the new button and seal onto the piston and found out that the installed height of the new seal is less than the original. This would allow the piston to move forward more than before and interfere with the cocking linkage. So, I made a spacer out of a belt. 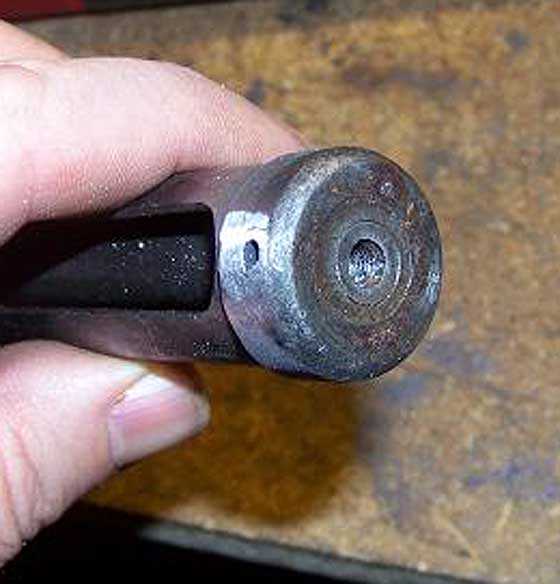 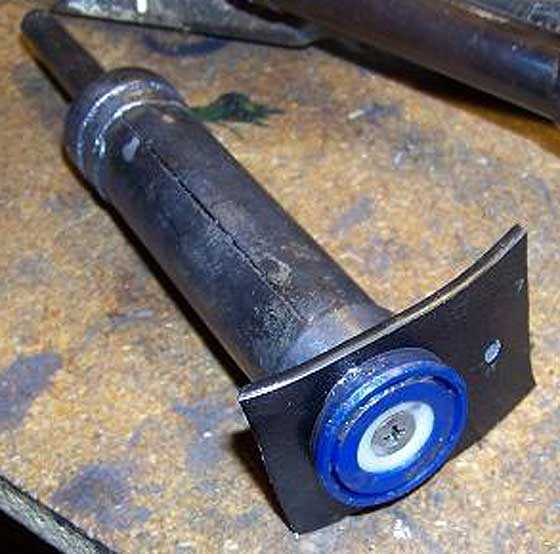 With a new button and seal installed, I needed a spacer…so I cut up one out of an old belt.

Almost perfect, but I eventually added a little more using material from a coffee can lid.

I cleaned the compression tube and reinserted the piston and spring. Another look at the rear spring retainer, and I see a problem — no rear spring guide! When I took the gun apart, there was a metal tube inside the spring up near the piston end. I didn’t think much of it at the time, but now it dawns on me (duhhhh) that it’s the actual guide pulled out of the rear retainer. Nothing seemed to be broken — just a press fit that wasn’t quite tight enough. Wood chisel to the rescue! I expanded the diameter of the tube by spreading the seam. 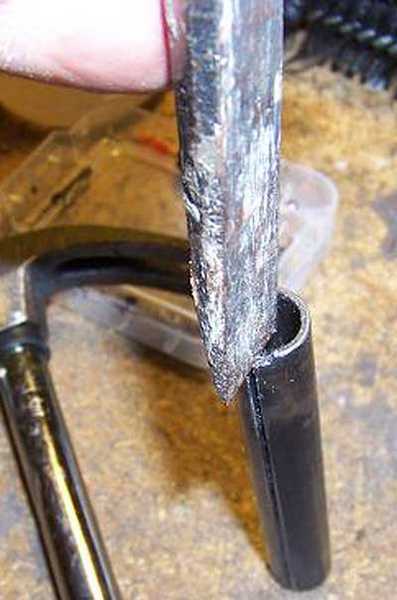 The guide had to be inserted back into the spring retainer, but the fit was too loose. A wood chisel helped tighten things up by spreading the the seam with my handy wood chisel.

I asked B.B. about pinning it (which involves drilling holes into precious and rare parts), but he assured me that this gun won’t be getting a lot of use. So, this repair stays as it is. 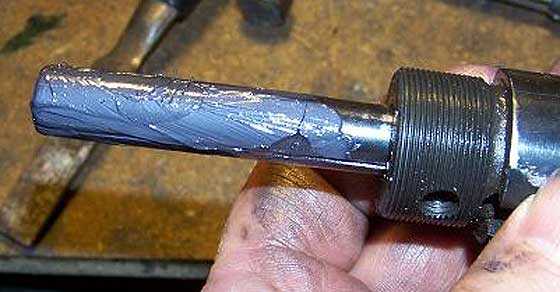 The retainer/guide assembly is all gooped up and ready to go!

The rear guide/retainer went back in as did the cocking linkage. Now, I’m back to where I started — the taploader assembly.

First thing I did was fish around for a skinny little spring and a 3mm ball to replace the missing detent. 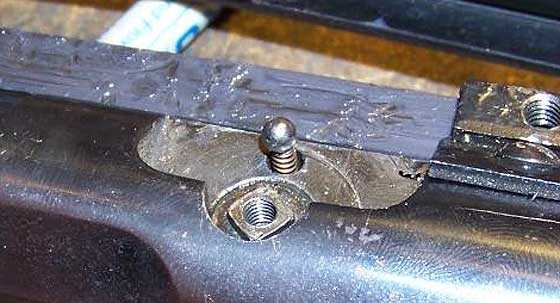 Of course, when working on something like this, it’s EXTREMELY important to heavily grease all parts BEFORE assembly, ESPECIALLY that little ball bearing which, incidentally, happens to be the only one I have. Why grease it now? Because when it goes sproing during one of several reassembly attempts, that itty bitty ball bearing HARDLY BOUNCES and DOESN’T ROLL! It sticks to things, making it infinitely easier to recover: 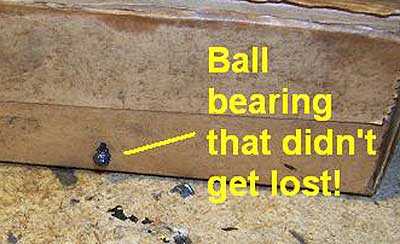 A greasy ball bearing does not bounce, not even an ounce, but if it did…I would trounce — it! 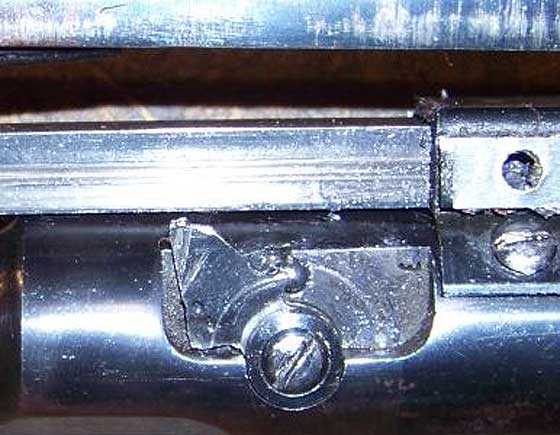 Back together and ready to work on the stock.

Everything went back together, and I’m getting psyched. I even put a couple of rounds through it before putting it back into the stock, and it seems to function just fine. So, I grabbed the admittedly beat-up wood. Just as I was putting the guts back into it, I noticed a crack in the stock. 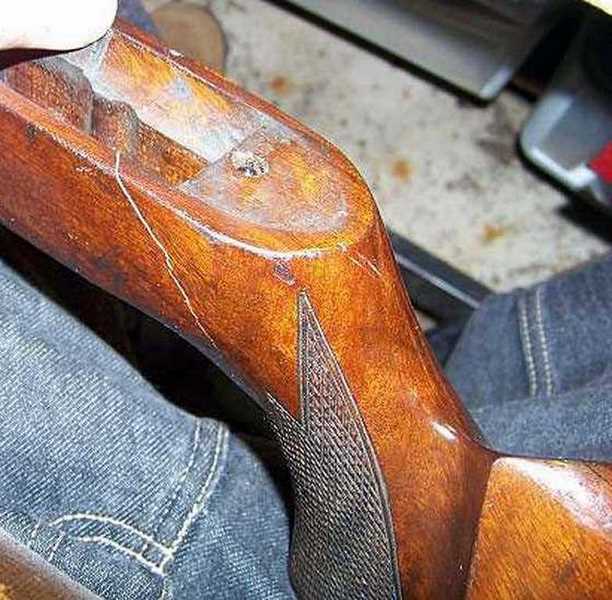 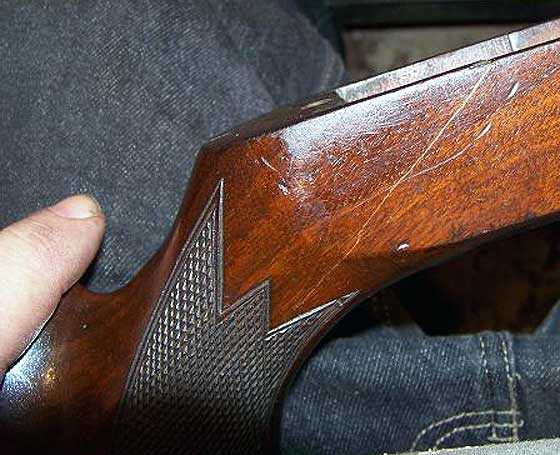 Finished with the action…on to the stock.

Great. Didn’t notice that before. Oh, well, shouldn’t be that hard to fix. Unexpected, but I’m awful glad I caught it. It’s a lot easier to fix a crack, even a bad one, than it is to fix a total break.

I’m hardly a woodworking expert, but I don’t really see a good way of pinning this. Shouldn’t be necessary, a friend of mine assured me. Today’s wood glues are so strong that I shouldn’t need anything else. Not much choice.

Starting on the starboard side, I spread the crack as much as I dared with a small screwdriver and used my finger to force the glue deeply into the crack. 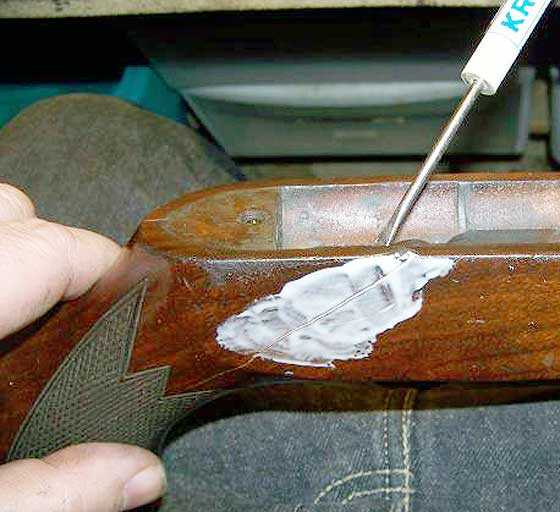 Glue is enough to keep this crack together without risking a complete break.

Actually, I made out pretty well and was able to get glue to ooze out of the other side of the crack

Close it, clamp it, wipe off the excess and let it sit. Hopefully, it’ll be as solid as it’s gonna get. Repeat for the port side, and I’m done.

One more thing. B.B. wanted me to do a quick write-up on the trigger so you can see how it works…which I remembered after getting the gun back together. So, it comes apart again, I pulled the trigger parts out and arranged them on the workbench in their approximate working positions. Since the rest of the gun is still assembled, I’m using an old piston rod just for illustration.

This picture shows the mechanism in the cocked position: 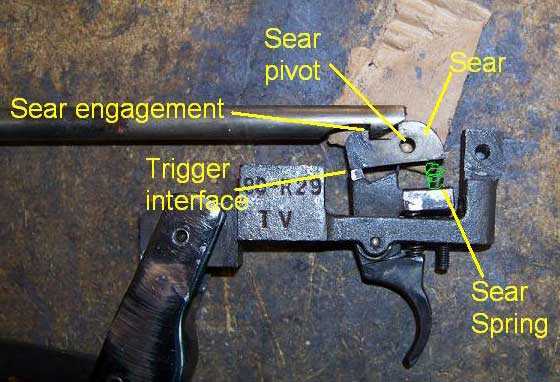 As the piston rod comes rearward, it pushes on the sear, rotating it clockwise so the sear engagement catches the hooked end of the rod. As the front of the sear lifts upward, the trigger rotates clockwise and the trigger interface slides under the sear to keep it in position.

When the trigger is pulled, the trigger interface moves forward, allowing the sear to drop down and release the piston: 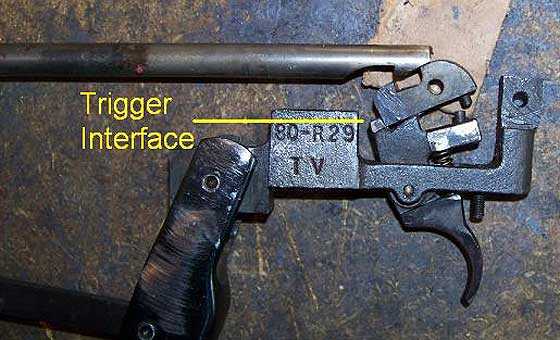 While it’s a step up from a direct-sear, it’s not a particularly elegant mechanism, similar in concept to the trigger on the (shudder) Industry B3.

So, that’s about it for working on the Falke. I did shoot it some, and found that the velocity averages almost 500 fps with Gamo Match pellets. Accuracy? I had trouble getting under .50 inches at 10 meters with the open sights. Perhaps Mac will do better. 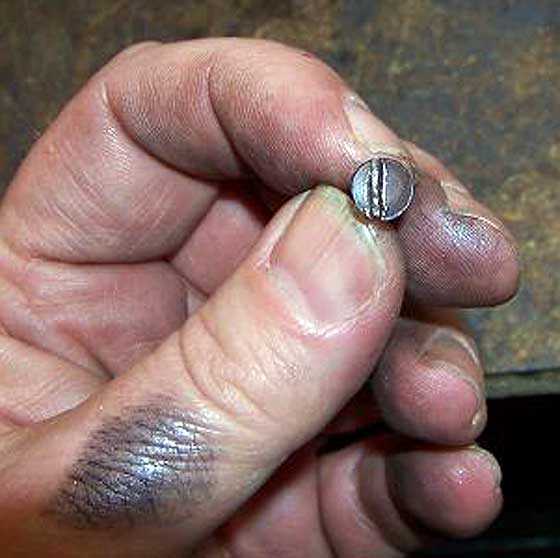 In all honesty, I was a little disappointed. This is only the third type of taploader I’ve worked on, the previous being the aforementioned Hakim while the first was a pre-WWI BSA underlever. That BSA sort of ruined it for me. It was such a beautiful example of 100-year-old metalwork. I’m still half-sick that I ever let Wayne have that gun back! The Hakim was somewhere on the better side of the middle, as is this rifle. But, it’s certainly solid enough, and there’s no reason why this gun shouldn’t still be working well after all of us are pushing up daisies. Or Crosmans, or whatever we prefer to be buried with! 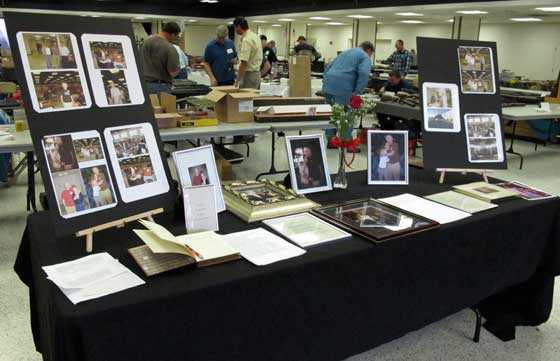