Accuracy day for the IZH 53M air pistol, and it’s a day with some good surprises. I want to talk about how this pistol shoots, so I’m going to skip the drama of finding a good pellet, because of the three I tried, only one stood out. That was the one I played with the most.

The sights work fine!
No need to worry about the sights anymore. They shoot to the point of aim and have plenty of adjustment in all directions. They’re also very crisp in the right lighting, which is strong light on the target and the shooter in relative dark.

I did have some adjustment to do in both directions and can attest to the sights adjusting easily and accurately. The windage adjustment lacks any markings on the gun to tell you which way to turn the knob, but it’s clockwise to go to the right and counter-clockwise to adjust left. There are very crisp detents, and the increments of movement are quite small.

The elevation knob is marked but lacks the crisp detents of the windage, so it’s more of a guess. Since I wasn’t going for a score, I stopped when I had the pellets hitting inside the bull at 10 meters.

Trigger
You notice a trigger a lot more when shooting targets than during any other testing; so now that I have more experience with it, I’ll say this one is okay but not great. It feels a little too heavy for the absolutely best work and, being a single-stage trigger, there’s no feeling of control or precision. You just squeeze until the gun fires.

Accuracy
The first pellet I tried was the RWS Hobby that went so fast in the velocity test. Alas, this time they weren’t that good, giving me lots of vertical stringing at 10 meters. That can be caused by a limp wrist or weak grip on the gun, but I’m pretty sure that wasn’t the case this time. 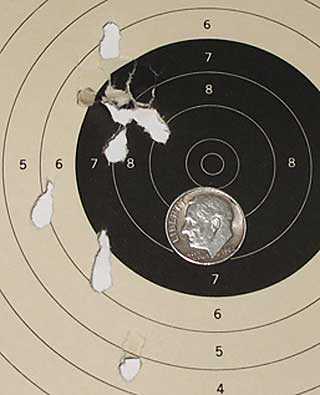 Ten RWS Hobbys made this 3.028-inch vertical string at 10 meters. This is not a good pellet for this pistol.

Next, I tried the Crosman Competition pellets. They grouped better, plus the group was more round and less vertical. That tells me that my grip on the gun isn’t the primary problem. About the time I switched to this pellet, I also started using my real competition shooting glasses instead of my normal prescription glasses. That did two things. First, it sharpened the image of the front sight, because the competition glasses have an adjustable iris to control the amount of light that passes through the lens to the eye. Second, the blinder on the competition glasses meant I no longer had to close my non-sighting eye. That cleared up the image of the sights and target and from that point on sighting was much more precise. 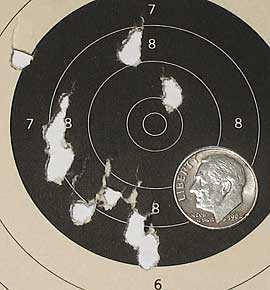 Ten Crosman Competition pellets made this 1.947-inch group at 10 meters. As you can see, it’s rounder than the group of Hobbys shown previously.

Then I tried a group of Gamo Match pellets, but that was a mistake. They shot all over the target, and I was afraid of missing the trap at 10 meters! After shot 7, I stopped and considered what to do next.

Getting better and better
As I shoot, I find that normally I get progressively better as the shots pass. So, the first group will be bigger than the next and so on. But there’s a downside to this. If the gun I’m shooting requires a lot of concentration, I’ll soon become tired and the groups will start to open up. It’s a fine line between getting accustomed to the gun and tiring out.

With the IZH 53M, however, the gun is so easy to shoot and the sights are so easy to see that I don’t tire as quickly. Therefore, instead of selecting another pellet, I went back to the Crosman Competition wadcutters that had already proven good and shot another group with them.

This time, I was definitely in the groove. Each shot felt the same and, what’s more, each shot felt right. When that happens you know you’re shooting to the best of your ability. 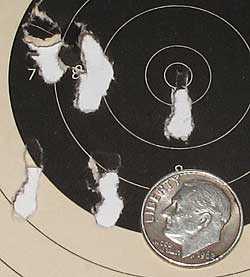 This group of Crosman Competition pellets showed the pistol’s capability the best. It measures 1.341 inches for 10 shots.

Summary
Well, that’s it for this one. The more I shot the gun, the more familiar I became with its operation and the better it seemed to shoot — with the right pellets. By the end of the session, I was sorely tempted to bring out my BSF pistol and do a comparison test. But that would not have proven anything, since the BSF is no longer made and the IZH 53M is so inexpensive. Best to just let the results stand as they are.

If I’d continued shooting the pistol, I might have found an even more accurate pellet, for this feels like an air pistol that wants to shoot! It’s an all-day airgun that you’ll enjoy for both plinking and informal target shooting.

The last word
I think the IZH 53M is a great value for the price. You get a lot of performance in this low-cost package, and it’s capable of plinking tin cans all day long. 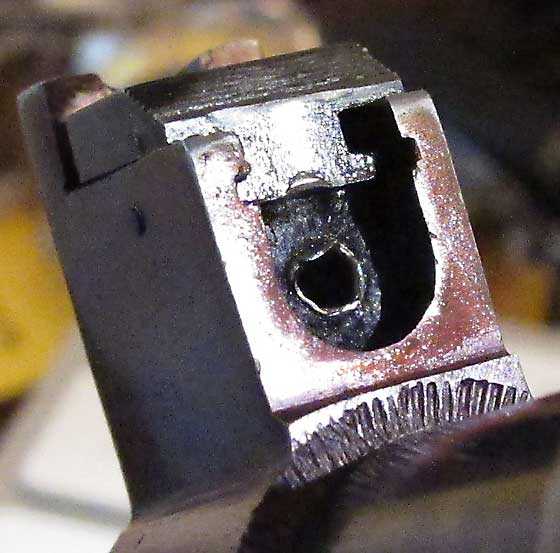