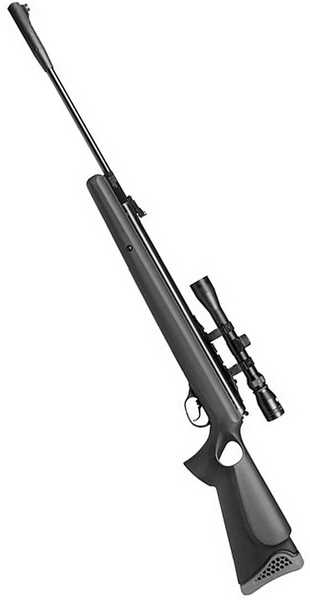 Today, we’ll begin our look at the first of what I hope will be many new Hatsan air rifles. The Hatsan 125TH air rifle is a powerful breakbarrel spring-piston gun with a black synthetic stock. The advertised velocity for this large .177 Turkish rifle is 1,250 f.p.s. A month ago, I would have decried that kind of velocity, but the results of the Pellet velocity versus accuracy test showed us that velocity, by itself, is not what causes inaccuracy. It is the harmonics of the gun that cause inaccuracy, and they can be moderated or “tuned,” if you prefer, by selecting the right pellet.

This is a combo package, so I’m not only testing the rifle but also the 3-9×32 Optima scope that came with it. This scope dopes not have parallax adjustments; but if you’re consistent in placing your sighting eye at the same place in relation to the scope’s eyepiece every time (your “spot weld”), you can eliminate any parallax error that tries to creep in. The scope mounts that come already attached to the scope are two-piece high rings (aluminum) with two-screw ring caps.

Quattro trigger
When I was in the Hatsan booth at the 2012 SHOT Show, I saw all their new models. There was no opportunity to try any of them, so I’m looking forward to putting this pellet rifle through its paces. Hatsan is advertising two features that I’m especially interested in. One is the Quattro trigger. I was told by the president of Hatsan U.S.A. that the Quattro is a match-grade trigger. I told him I would reserve judgement, but he assured me that it is extremely adjustable. 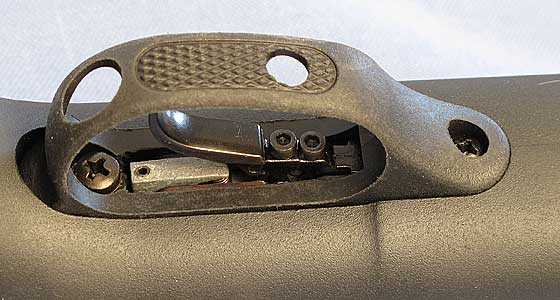 The Quattro trigger has three adjustments. It’ll be interesting to see how well it can be adjusted.

The reason I’m skeptical of the trigger is the physical difficulty encountered by a trigger on a spring-piston gun that has to restrain well over 100 lbs. of mainspring force (probably more like 160 lbs. in this case) and yet break cleanly and crisply. The Rekord can do it, but that design is a multi-lever trigger that’s more famous than many entire airguns! If Hatsan has been able to design another trigger that’s just as good, it’s earth-shattering news.

I’m giving lots of leeway to the “match-grade” trigger comment…a real match-grade trigger releases in ounces, as we’ve seen from testing numerous vintage 10-meter guns. I won’t be looking for that level of performance on this gun. But I will hold the Quattro trigger up to the Rekord, which, on a Beeman R1 rifle of similar power, can be adjusted to a crisp release weight of 1 lb. and still be quite safe.

I couldn’t resist a couple test shots, but they didn’t reveal much. The trigger is reasonably crisp as it comes from the box and not too heavy, either. There’s a small amount of creep in the second stage. I’ll have to try adjusting it for the next report. To do that, I’ll read the owner’s manual, which I must say is very nice. It has clear instructions on adjusting the Quattro trigger and should be a great help when I do it. The adjustments, by the way, are for the length of the first stage pull, the length of the second stage pull and the second stage pull weight.

It isn’t up to Rekord trigger performance right now, but it also isn’t a bad trigger. It’s probably the equal of the Diana T06 trigger at the present time. I’ve fired the rifle only a few times as I write this. With the right adjustments, I hope this will turn out to be a great trigger.

My friend Mac had observed that the trigger looked like it came up, rather than straight back. Of course, he was limited by not being able to shoot the gun, just as I was. In fact, the trigger does come up, but the angle of the blade makes it slide through your finger so it feels like it’s going straight back. Some airguns do feel funny this way, but the trigger on this Hatsan feels quite normal.

The safety is automatic, and the button is located at the back of the spring tube — convenient for release by your thumb. Unlike most other airguns and firearms you pull the safety button back to release it. The norm would be to push it forward. 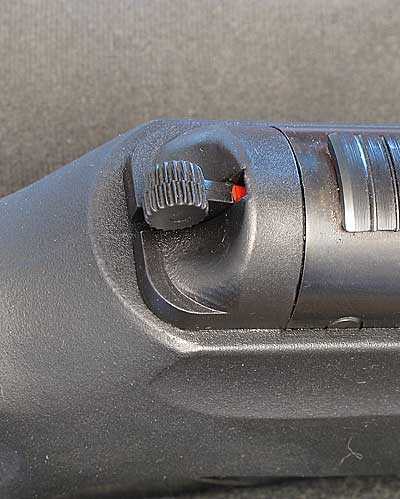 The safety engages automatically when the rifle is cocked. But to release it, you pull the button back, rather than pushing it forward.

SAS
The other feature Hatsan is touting for this new line of airguns is their Shock Absorbing System (SAS), which is supposed to isolate the shooter from the vibrations of the powerplant. As I understand it, it’s one or more rubber bushings between the action and the stock. At this point, I have fired the gun only a few times, but it does vibrate some — as I would expect from an untuned rifle of this power. The vibration isn’t that bad, though. It certainly doesn’t give you a headache or sting your cheek when the gun fires, so the SAS is probably doing its thing. 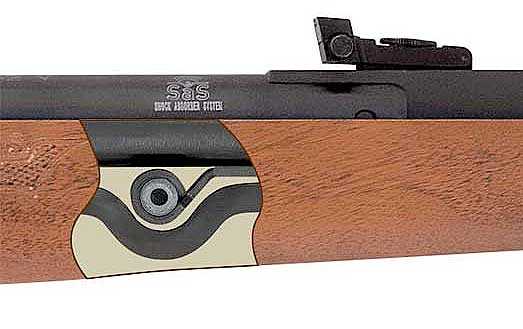 This illustration shows how the SAS works. The stock is held to the action by a strong bolt that passes through a rubber bushing. 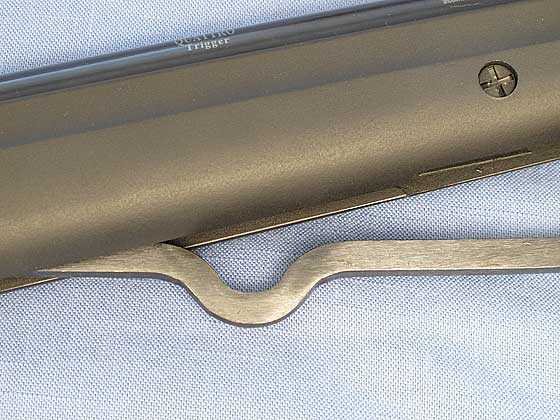 This is the actual cocking link. You can see how it wraps around the stock bushing. 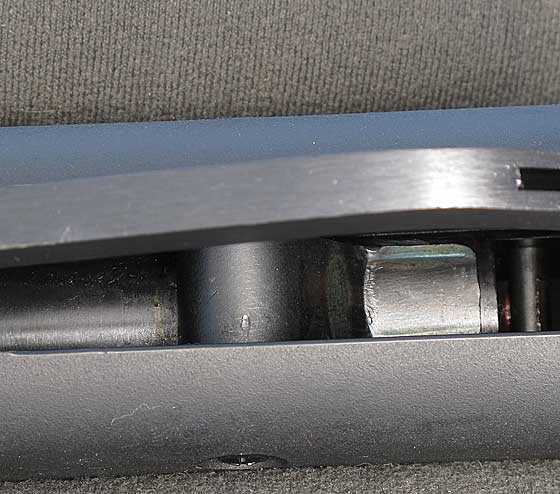 Looking straight up into the stock slot, you can see the rubber bushing that the stock bolt passes through. It’s contained in a steel housing.

The stock
The stock is for right-handed shooters only, as the sculpted cheekpiece does not roll over to the other side. This is a thumbhole design, and it has to be shot that way — there’s no provision in the shape of the stock to shoot the rifle any other way.

The pull on the rifle as it came from the box is 13.25 inches, but there are three spacers that came with the rifle to lengthen this pull. The owner’s manual doesn’t address them at all, and the Phillips-head wood screws that hold the rubber pad on the rifle are buried so deep inside the pad that you’ll have to find them by feel, alone. I added all three spacers and now the rifle’s pull is a more comfortable 14 inches. 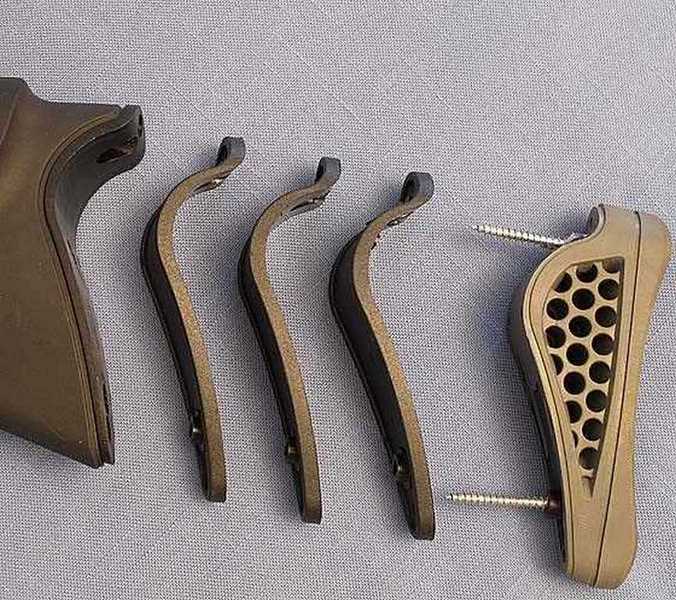 The buttpad can be moved back with one to three spacers that come with the rifle. With all three spacers installed, the pull is 14 inches.

The synthetic stock material is rough to the touch, but it feels good when the rifle is held. The stock profile or cross-section is large at all points of contact except for the thumbhole, where it fits me surprisingly well.

The rifle weighs just one or two ounces under 10 lbs., even, with no scope mounted. Overall length is 47.4 inches, so this is a very large air rifle. Your Winchester model 70 will feel like a carbine in comparison, unless it’s an African model. The barrel is 19.6 inches long, and you’ll be glad that it is when you cock this powerhouse…it’s like bending the bow of Hercules. You need one of Archimedes’ really long levers to cock this one! I’m guessing the effort will exceed 50 lbs., but I’ll measure it for you in Part 2.

Sights
The rifle comes with a nice set of open sights, even though it’s a combo that includes a scope. The front sight is fiberoptic and the tube is exposed, which could lead to damage. This is where a metal hood would be appropriate. 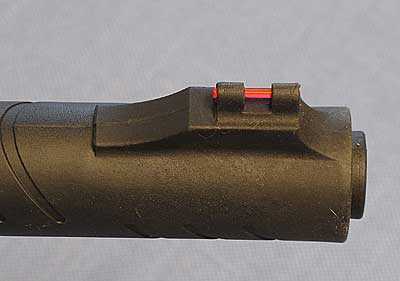 Front sight contains a fiberoptic tube that’s exposed to damage. A hood would be good here.

The rear sight, which is also fiberoptic, is a nice, adjustable open sight with click detents on both adjustment knobs. The windage knob detents are mushy and vague, but the vertical detents are crisp. There’s a scale on the windage adjustment and reference numbers on the elevation knob. 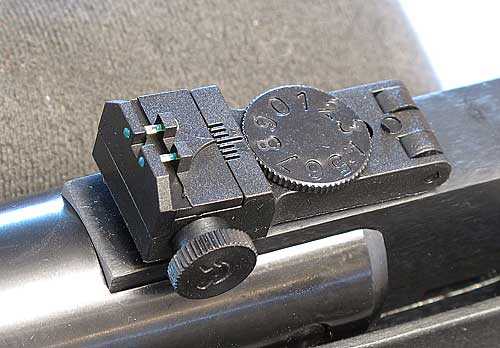 The rear sight looks like a good unit. I plan to try it in this report.

I like the open sights on this rifle enough to conduct a separate accuracy test with them. So, there will be at least four parts to this report.

There’s also a scope rail on top of the spring tube. And this is perhaps where Hatsan shows its capability, along with the Quattro trigger and the SAS. When Hatsan made Webley spring rifles, they had a two-dimensioned scope rail that appeared to be sized for both 11mm and Weaver dovetails, but the base was very crude and the cross-slots weren’t even the same size. They looked like someone from summer camp had filed them by hand. I criticized them at the time; but upon reflection, perhaps Hatsan was only doing what Webley paid them to do. The scope rail on this 125TH is correctly proportioned and well-finished. Maybe Hatsan did the right thing by coming to the U.S. under their own name!

Notice in the picture that there are two vertical holes for scope stop pins, as well as a flat metal plate. There’s also a threaded hole forward of the metal plate if the shooter desires to reposition it. This gives great flexibility for positioning your scope mounts.

The scope rail gives you the option of using either Weaver or 11mm scope mounts. It looks very nice. Note that there’s a flat scope stop plate for the 11mm dovetail grooves and two vertical holes for scope stop pins. You can also reposition the flat metal plate forward by using other threaded hole.

So far
I’m impressed. After seeing the Webley Hatsans, I didn’t think too much of their airgun designs, but this 125TH looks like it could turn out nice. To do that, the rifle has to be accurate. We can only hope.