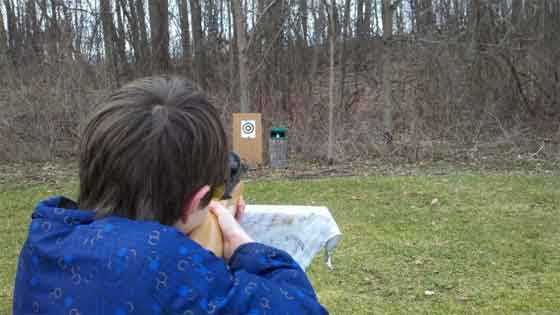 Rich says that this is Ben, who’s 11 years old. He’s getting ready to shoot the reset paddle on his Gamo trap. He’s using the Air Venturi Bronco.

Today I’ll begin a look at a big bore precharged air rifle that most of you will never see. The Quackenbush .308 is a classic from the central Missouri airgun maker.

This air rifle may not be mainstream; but just mention it to airgun hunters, and you might as well have pulled the starter rope on a hotrod snowmobile! The noise starts immediately as people break up into discussion groups, some to explore the potential accuracy or the best bullet and others to recount the dozens of game animals that have fallen to their rifles.

I’ve personally seen 150-lb. goats dropped at 140+ yards with single shots from this rifle, though I wouldn’t recommend it for that distance or for that size animal. But it did work, and I saw it do that twice in one day. But hunting is the purview of others. I’m going to do my usual review of the rifle and let you readers decide how best to use it.

.308 caliber
Dennis Quackenbush is both a shooter and a hunter. Besides making several hundred airguns each year, this man “gets it.” He knows that if an air rifle is a .45 caliber it either has to be a .451 that can use common pistol bullets or a .458 that uses common rifle bullets. He would never think of foisting a .454-caliber rifle on his customers, because Dennis knows that the .454 pistol caliber died before World War II. As a shooter, he understands the importance of making rifles in calibers for which there are a wide variety of lead bullets, because not everyone casts their own.

He chose the .308 caliber for the obvious reason that it’s the most popular-sized .30-caliber bullet here in the U.S. There are .310 and .311 lead bullets available for the SKS, AKM and the Mosin Nagant — but they’re not that popular. You have to search to find them. But .308 is money in the bank here in the U.S. You’ll find dozens of different styles and weights to try in your rifle.

I once asked him why he didn’t go with 9mm when he brought out this rifle and he responded, “Ballistics. You know there are very few 9mm lead pistol bullets available on the market; and of those, the heaviest is about 125 grains. That gives you a short, fat bullet with low sectional density and poor long-range performance. But in .308, a 130-grain rifle bullet is reasonably long and has a much higher sectional density than the short 9mm pistol bullet. And my rifle can drive a 130-grain .308 bullet up to respectable velocity, making that caliber well-suited for hunters.”

Quackenbush .308 rifle is handsome even in this lowest-grade version.

The rifle
My .308 is made on a Long Action Outlaw receiver. I tested a .308 Exile back in 2005, but the rifle I tested was made on the old action with a shorter striker spring and striker travel. The long action allows the striker spring to be longer and the striker to travel a longer distance. Both increase the airflow through the valve, which equates to power.

My article reviewing the Exile is up on the Quackenbush website, so I’m able to compare the performance of this current long action gun to what was done in the past. That old rifle shot a 128.6-grain bullet at 860 f.p.s. on the first shot — generating 211.25 foot-pounds of muzzle energy. It did take some shooting to get the rifle up to that velocity, as the moving parts do need to wear in a bit, but I’ll also lubricate them before the velocity test starts with the new rifle, which will put me on better footing than I was in the old test.

The rifle is blued steel housed in a figured walnut stock. I selected the lowest-grade gun Dennis makes, but you can see from the photo that it’s still something to be proud of. It weighs 8 lbs. exactly without a scope, and the rifle comes without sights, so a scope is required. It comes with Weaver bases installed, so you need Weaver rings to match.

I’ve used the Leapers Bug Buster scope and other compact scopes in the past on these rifles, but the long action of this particular rifle needs a scope with a longer tube. The plan is to install a long eye-relief scope and see how it works. After my success with the Evanix Conquest at 4x, I’m suddenly interested in lower-power scopes — especially for workman rifles like this.

The rifle is just shy of 44 inches long, and has a 26-inch barrel. The pull is 13-1/2 inches. The action is different from what you may be used to, though it’s not unusual. Dennis uses a separate cocking bolt to retract the striker against the heavy spring, leaving the loading bolt for just the single function of inserting a bullet. This design was popular back in the 1980s with several vintage British precharged rifles but is seen less often today. In powerful big bores, however, it offers the advantage of providing good purchase on the cocking handle, while leaving the loading bolt normal-sized. 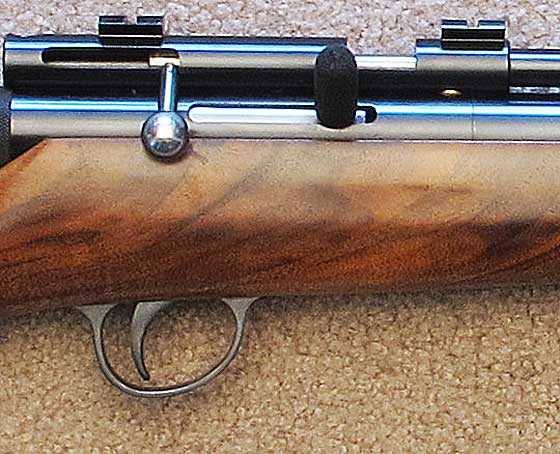 The black handle cocks the striker. The knobbed bolt is just for loading.

Dennis makes all his own barrels and the rifling buttons that cut them. At one time when he was experimenting with twist rates, he was hand-cutting the rifling; but now that he has the data he needs, button-rifled barrels are easier and faster to make, as well as smoother after production.

Lead bullets
I’ve made several references to using lead bullets — now let me explain why. In big bore air rifles, you want to eliminate as much friction as possible. Jacketed bullets have too much friction and will slow the velocity way down, plus they wear the soft steel of the barrel much faster. This holds true for vintage firearms, as well, which is why I would never shoot a jacketed bullet in a Trapdoor Springfield or in my old Ballard. People do shoot them in vintage guns, but they’re wearing out barrels much faster than they should.

These older guns have much softer steel in their barrels. While they’ll reasonably give 50,000-100,000 shots with lead bullets if properly cared for, shooting jacketed bullets will wear them out in as few as 5,000 rounds. I’m speaking about firearms now — the airgun barrels do not wear out at the same rate, and nobody knows how many shots they could conceivably get.

Fill pressure
Dennis builds airguns for thinking owners. You don’t just pull one of his rifles from a box and fill it to 3,000 psi. You experiment, which means you need to have access to a chronograph. I’ve found his Outlaw actions can tolerate 3,200 psi up to 3,500 psi very well and give optimum performance. Others have claimed fill pressures up to 3,850 psi in their guns. The point is that you experiment until you find the fill pressure that gives the greatest number of high-power shots with the bullet you’ve selected to use. I’m hoping to get four or possibly five good shots on one fill of this rifle.

Quackenbush rifles all fill from a standard Foster male fittings. He provides a stainless steel fitting to prevent the ball bearings of the female fitting from impressing themselves into the metal of the male fitting at high fill pressures. 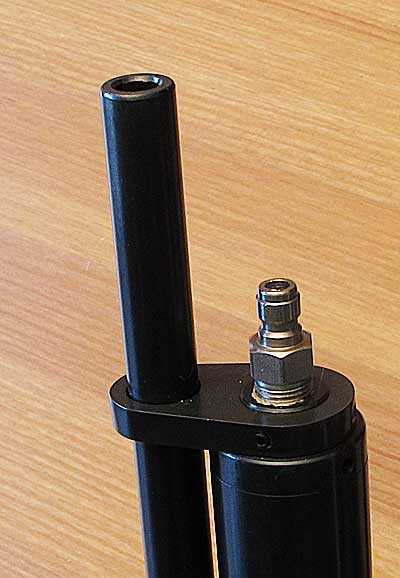 The rifle is filled through a common Foster male fitting. It’s very standard around the world.

General
Dennis has very definite thoughts on what makes a good airgun. Though he also builds parts for aerospace companies and test fixtures for other manufacturers, he keeps his airgun technology firmly planted in the 1950s. By that I mean he’s going to use steel for the metal parts and walnut for the wood.

He buys his stock blanks in large lots, so there will always be enough for his production needs. And he shapes the stocks on a pantograph to save time and keep the shape consistent. 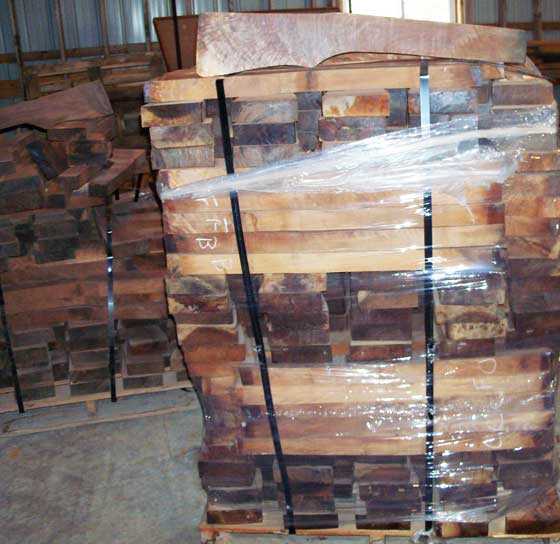 We’re in this together
I have owned this rifle for about four years and have never fired it. My .458 Quackenbush always takes precedence, so this adventure will be just as new to me as it is to you. I’m inviting you to watch over my shoulder as I get to know this classic big bore.