The sport originated in Germany, I believe, though it was probably popular in Austria and perhaps even in Switzerland. It existed at least as far back as the mid-19th century and was shot outdoors at a target pulled on tracks by human power. The original target was a male chamois made of wood with a target where the heart of the animal would be. But that target evolved into a male red deer, called a stag. The stag was exposed to the shooter for a specific number of seconds.

In time, the stag was replaced by a running boar, because the stag was thought to be a noble animal and the boar wasn’t so highly regarded…though in England they did have a similar sport called Running Deer.

As the match evolved, it picked up rules. There was a slow presentation of the target (5 seconds) and a fast presentation (2.5 seconds), and the shooter was supposed to shoot one shot on each pass. The target was engaged in both directions during the match. It wasn’t long before the wooden animals were switched for paper targets that were both cheaper and easier to score.

The Running Boar target was double-ended so it could be used in both directions on the same track. 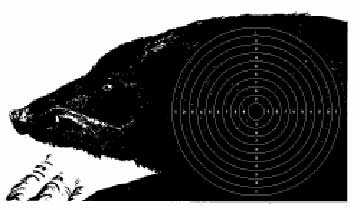 The aim point was usually the animal’s nose, but that was the choice of each shooter.

Over the years, the rifles they used changed from muzzleloaders to centerfires, and eventually to rimfires and airguns, because of the increased opportunities for range safety. Today, both rimfires and airguns are still being used at the World Cup level.

The guns have traditionally used sights that account for the movement of the target and allow the correct amount of lead. When scopes came into the event, they were specialized with reticles that allowed for the lead to be dialed in. Anyone who owns an FWB 300S Running Target rifle with the correct scope has something to prize.

Gary Anderson brought a running target range to the Roanoke Airgun Expo back in the late 1990s, giving many airgunners the opportunity to closely examine the target setup. By the 1970s, the sport had become Running Target — to assuage those who felt shooting at boars was not politically correct. The sport was part of the 1992 Olympics, but was dropped after the 2004 games. It’s a sport that goes in and out of fashion as the years pass; but it’s still a World Cup event, so we may see more of it in time. 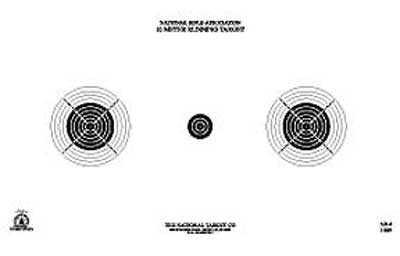 When the change was made to Running Target, the target was changed to a target with one central aim point and two bulls — one for each direction.

Velocity of the FWB 300S
Today is the day we check the velocity of this FWB 300S, so let’s get to it. When it was new, the 300S was advertised with a velocity of 640 f.p.s., though the pellet they was used to get that number was never specified. I will use a range of pellets I believe are appropriate to the power level of a spring gun like this. And, in a departure for me, one of the pellets I test will be domed.

Air Arms Falcon
I tested the Air Arms Falcon pellet even though it’s a domed pellet that’s not appropriate for target shooting, because many readers use these rifles with scopes for plinking and other pursuits. So, I’ll also shoot this pellet for accuracy — just to see what it can do.

This was the first pellet I tested, and I’m so glad I own a chronograph, because I learned something valuable about the 300S in this test. This rifle needs to warm up before it’ll shoot with stable velocity. Think of an older car from the 1950s that had to be warmed up for a minute or so and then driven slowly for the first mile to allow the parts to expand and start sealing as they should. Heck — most car engines from that era developed leaks pretty quickly, and you did whatever was necessary to keep them from wearing faster than they should. Well, this FWB 300S needs the same kind of warmup. Let me show you the first 9 shots.

So, if you shoot a 300S — or any of its derivatives — for score, maybe you better shoot about 10 shots just to warm the action before expecting the rifle to do its best.

After shot 9, the rifle became very stable and averaged 658 f.p.s. with the Falcon pellet. The low was 655, and the high was 671 f.p.s. At that speed, this pellet generates 7.05 foot-pounds. That’s pretty brisk for a 300S; but Mac, who traded the rifle to me, said it had just been sealed and overhauled by Randy Bimrose, so it’s performing at its best.

A couple observations
Before I move to the next pellet, I’d like to make a few observations. First, I said in Part 1 that the 300S action doesn’t need to be levered forward at the end of the cocking strike like the action of an RWS Diana model 54 Air King, but that was incorrect. It does have to be levered forward into lockup in just the same way, but the 300S action is so smooth that I didn’t notice it until now. With a Diana 54, you always notice it.

I mention this because, like the Diana 54, the 300S uses the sledge-type anti-recoil system; and even though it’s a gentle rifle, it has to operate in the same way as the more powerful Diana. Moving the action forward into lockup prepares the action to release when the gun fires and to move on the steel rails in the stock just a fraction of an inch, canceling the feel of recoil.

The second thing I noticed this time is that I can feel the cocking link bump over the mainspring coils as the cocking lever moves back to the stored position. I sometimes feel that same roughness in other spring rifles, where the tolerances are tight, and I thought I’d mention that this one does the same thing.

There you have it. This 300S is extremely healthy and ready to go target shooting in the next report! It’s still a joy to shoot and is a rifle that you should continue to covet if you’re so inclined.

One additional thing. There has been some talk of how accurate these rifles are at longer range. If you want, I’ll schedule a special fourth report in which I shoot this rifle outdoors at 50 yards. I’ll have to wait for a calm day, of course, but wouldn’t it be fun to see how this rifle shoots at that range? 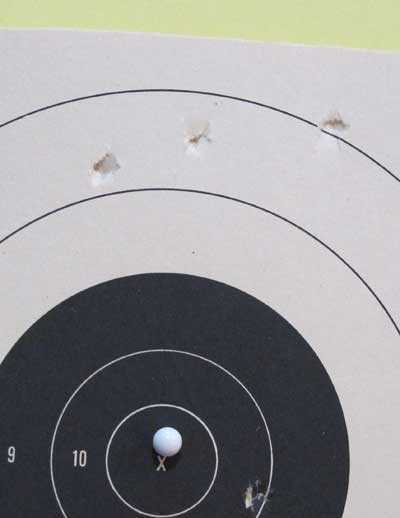 Buying airguns at a gun show