I’ve noticed that a lot of you are responding positively to the fundamentals that have come out in some of the recent reports, so I thought I would do a few more important ones for you, starting with scopes. This will be a series of bite-sized reports.

My experience shooting the Conquest with a 4x scope at 50 yards last week and getting great groups prompts me to want to share a number of scope evaluation tips with you. And, as always, I expect the comments from our readers are going to be even more interesting than the reports.

What magnification (power) to choose?
Starting with the Conquest accuracy test, it’s obvious that you don’t need a lot of magnification to shoot well. I normally use more than just 4x for a gun as accurate as the Conquest, but not on all rifles. As a scope increases in power, it also gets longer and heavier, so a compromise between power and size is usually best.

I have some 3-9x scopes that have unusually clear optics and thin reticles that I enjoy using. Of all of them, the one I like the best is not marked in any way. I think it’s a Leapers, but there are no identifying marks that reveal who the manufacturer is. The optics are clear and the crosshair is thin and sharp. This is often my go-to scope to use for a quick test.

My favorite power combination is probably a 4-16x. I find it packs the most power into a convenient package without the scope becoming too long and heavy. Given today’s optics, a good 4-16x isn’t much longer than a 3-9x from a decade ago.

But you don’t need even 16x to shoot accurately. That is what the new airgunner must understand. I have a .250 Savage centerfire rifle that shoots 10-shot groups smaller than one inch at 100 yards nearly every time. The scope on that rifle is a vintage all-steel Weaver V9 W, which means it is a 3-9x variable that has a wide field of view. The objective lens is only 32mm, so it isn’t as bright as some modern scopes, but it has a super-fine reticle with a tiny dot at the intersection of the crosshairs. If I ever find another scope like this at a gun show, I am prepared to buy it because the combination of power, optical clarity and crosshair size is ideal for this rifle. I use this rifle for prairie dog-sized targets out to 300 yards. That’s good enough for me.

Another rifle that shoots small groups is a custom No. 5 SMLE that I’ve converted to .219 Donaldson Wasp. The scope on this one is another one that’s vintage and all-steel — a Redfield 2-7x variable with what appears to be a 28mm or 30mm objective. The crosshairs are even finer than those of the vintage Weaver, and the dot at the intersection is also smaller. This rifle should be good for prairie dogs out to 300 yards, as well, but I feel the power of the scope limits the range to 250 yards for targets so small. Coyotes to 300 yards are possible because they’re much larger. So, I’m saying that a 7x scope works well at 250 to 300 yards, but the maximum effective distance depends on the target — at least for me. 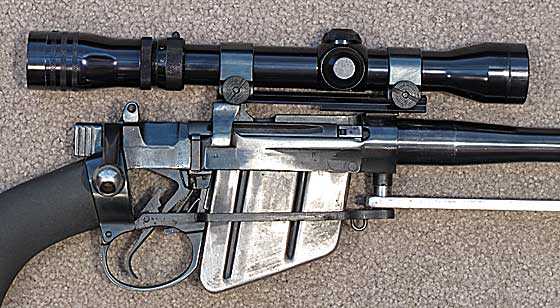 It might be an ugly rifle, but this .219 Donaldson Wasp can shoot. It has a custom Shaw barrel of my own design with a faster twist. And the little Redfield scope is plenty good for what I want to do.

Going the other way, I absolutely love Leapers’ line of long eye relief scopes that produce 1.5-4x. These scopes may not make the target appear large, but they can’t be beat for clarity. For value, I don’t think the Leapers 1.25-4×24 long eye relief scope with the one-inch tube has any equal. It’s currently priced at only $85, which is very little for such a great sight. It would be ideal on big bore airguns of all kinds, as well as powerful springers that won’t be shot past 50 yards — rifles like the Beeman R1 in .22 caliber, for example. Yes, the parallax is set at 100 yards, but I have found that when the magnification is this low, it doesn’t matter where the parallax is set. This scope would be ideal on a New England Firearms (NEF) single-shot rifle in .45 Colt or .44 Magnum or on any small carbine in a pistol caliber.

What about more powerful scopes?
There are a FEW applications for the scopes with power up to 32x and more. Field target competition is one such game — not because of the additional aiming precision, but because that extra power helps you resolve small objects out at 55 yards, so you can determine ranges with the parallax adjustment more precisely. When you can focus on very small objects at long distances, the scope helps to determine the range to them. And long-range target shooting is another time when a higher-powered scope is needed. When you’re going for the absolute best group that can be fired from a gun, the scope must be powerful enough to reduce the aiming error to the smallest fraction of an inch.

Talk all you want about big scopes. Try carrying around one like this for a couple hours! A Daystate Harrier is dwarfed by this monster Tasco Custom Shop 8-40×56.

HOWEVER — and this is the whole point of this discussion — it doesn’t take the Hubble Space Telescope to shoot good groups at 50 yards. As you clearly saw in my report on the Conquest, I did it with only 4x. Consider that when thinking of your next scope. You can have a handy package that carries easily and handles rapidly or you can mount the biggest bragging-rights scope money can buy on your air rifle and then suffer for it.

Clarity
Clarity goes hand-in-hand with accuracy when using a scope. In fact, I think clarity is the single most important attribute a scope sight can have. There are technical means of determining relative clarity in scopes. The most common one is determining how many line pairs the scope can resolve in a standard test. Clarity is actually a statement of the scope’s ability to resolve an image. When we say clarity, we mean resolution.

I am not an optical engineer, nor am I qualified to discuss how scopes are tested. And the subject is so technical that even if I could discuss it, not everyone would understand what I was saying. I’m going to reduce the resolution/clarity question to something we can all understand.

I have a simple test I use to subjectively determine the relative clarity of a scope. All I do is point the scope at the roof of my neighbor’s house about 25 yards distant and look at the shingles. If the shingles appear sharp, with the vertical joints well-defined and the abrasive particles standing out clearly, I know the scope is clear. If any of the image is muddy, even after the scope is adjusted for that range, I know the scope is not as clear as I would like it to be.

I developed this test a couple years back when I pitted a Hawke scope against a Leapers scope of the same power and specifications. Until that test I thought nothing affordable could ever beat a Leapers scope; but in that test, the Hawke scope emerged as the clearer sight. It was also more expensive, but it didn’t cost twice what the Leapers did, as I remember. The shingle test is a good one for any scope you intend using for target shooting or hunting, as nothing in the field will exceed the fineness of the image the shingles can give.

If you don’t have access to shingles, anything with a fine grain will work just as well. Old wooden fences are another way of testing the resolution of your scope. Just be sure to always test every scope at the same distance and using the same object, and your test will soon become very refined.

When you buy a scope, you usually can’t perform the test I just described. You have to take someone’s word on the clarity. But I have a couple tips about that.

1. Multi-coated optics on inexpensive scopes are usually not as clear as single-coated lenses. Leapers has used a single coating of emerald for as long as I’ve known them, which is why they’re as clear as they are at such a low price. You might give up something else with single-coated optics, such as five minutes hunting time in the morning and evening, but that depends on what kind of coating it is.

This deserves an explanation. While multi-coatings can be applied to make optics perform their best, the hype of multi-coating is too powerful to be overlooked by the marketing departments of many manufacturers. Therefore, the cheap scopes are multi-coated without regard to light transmission or any other enhancements. As a result, these multi-coated optics are much like airguns that shoot over 1,000 fps — lots of hype but you’re giving up accuracy. On the other hand, expensive multi-coated optics deliver superior performance.

2. The objective size doesn’t matter as much as you think. You don’t always need the 56mm objective to see clearly. The quality of the lens material and the optical coating(s) matter more than the objective size.

3. A 30mm scope tube will be noticeably clearer than a one-inch tube, if all else is equal.

4. You can live with a lower-power scope if it’s also clear, but a high-power scope that doesn’t focus or is unclear is the worst headache imaginable.

The bottom line
Considering just these two subjects — power and clarity — shop for a lower-power scope with a 30mm scope tube and a single lens coating. From what I saw in the Leapers booth at this year’s SHOT Show, there will soon be a flood of very clear scopes at good prices (but not cheap!) hitting the market this year.

Price
Stop shopping for scopes by price, alone, and then condemning your rifles, pellets and the entire hobby of airgunning when things don’t work out! Most cheap scopes are cheap for a good reason. I understand trying to buy the best scope you can afford, but stop focusing on the price so much.

And this final tip is worth the price of this entire blog: Most combos (rifle and scope for one price) that are put together by manufacturers are put together by their marketing departments to get rid of the cheap scopes nobody will buy! However, when a combo is put together by a dealer, that usually isn’t the case. Pyramyd Air has put some very decent scopes on some of their combos because they realize their customers really care which scope comes with the gun. The more the combo costs, the better the scope will probably be.

But watch out for those manufacturer combos!

68 thoughts on “Some scope fundamentals: Part 1”