I’ve been meaning to write this report for a long time, and when we recently had a heated discussion about the rifle, I knew the time had come. This will probably be a longer report, because the AirForce Talon SS isn’t just one air rifle — it’s a whole shooting system!

The Talon SS was the very first air rifle to intentionally use a shrouded barrel to quiet the muzzle report. Ten-meter target rifles had been doing it unintentionally for years; but when John McCaslin, the owner of AirForce and designer of the rifle, put the SS together, he intentionally used the shroud technology for that purpose. Today, it’s hard to find an air rifle that isn’t shrouded, so it’s difficult to keep in mind that the whole movement to shroud began as recently as one decade ago.

The Talon SS is a single-shot precharged pneumatic rifle with a shrouded 12-inch Lothar Walther barrel. The frame extends several inches beyond the end of the barrel, and a special end cap strips off much of the energized compressed air that leaves the muzzle. The report of the gun is muffled, though it’s not as quiet as some silenced guns. I always tell people that a shot on high power sounds like hands clapping once.

The rifle is sold in all four smallbore calibers — .177, .20, .22 and .25. Because the barrel can be changed by the owner in about five minutes, each rifle is capable of being any caliber and also any of three barrel lengths — 12 inches, 18 inches or 24 inches. This is the only air rifle with that kind of flexibility. But only the 12-inch barrel has the benefit of a shroud.

Adjustable power
On the left side of the frame, a power adjustment wheel allows the shooter to adjust the rifle’s power across a broad spectrum. I will test my factory-stock SS for you to demonstrate the range, so we’ll look at that in the velocity test. But the power adjustment is somewhat confusing to new owners. 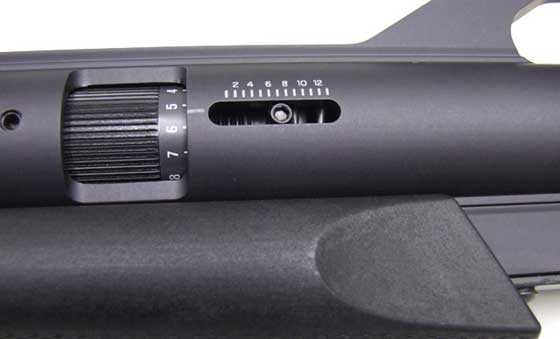 As the knurled wheel turns, the screw head moves inside the oval slot to the right, indicating the gross power setting.

The knurled wheel has numbers that align with a white index line on the right side. The Allen screw head in the slotted window to the right of the power wheel moves along a scale of numbers. These numbers are put there so the owner can return to certain settings. They do not indicate the same power level from rifle to rifle, because each rifle is different. But new owners often think that if someone else’s SS is doing well at a setting of 8.13 (the Allen screw on the number 8 and the power wheel indexed at the number 13), their rifle should do the same. It doesn’t work that way, because this isn’t a measuring device — it’s a memory marker for each separate gun. While the guns all perform similarly, each is also unique; and the power adjuster has to be set for just that gun.

Trigger
The trigger is two-stage and not adjustable. It typically breaks at between 2.5 and 3.5 lbs. in a new gun, and it usually has a little bit of creep in the second stage. This is another place where people get confused. The trigger in an AirForce rifle is a fairly complex set of parts that each affects the others. Some parts are case-hardened to a specific depth, so no polishing or stoning is recommended. All parts that move are coated with a dry-film molybdenum disulphide compound that bonds with the metal; and over time the trigger becomes both lighter and smoother in operation — not unlike the triggers in BSF spring rifles.

Leave the trigger alone and after a few thousand shots it will be perfectly crisp and light. But try to work on it, and you can ruin the gun in minutes — plus void the warranty. It was my experience with the AirForce triggers that cautioned me to leave the National Match trigger in my AR-15 alone. I know it will break in to be exactly what the spec states. 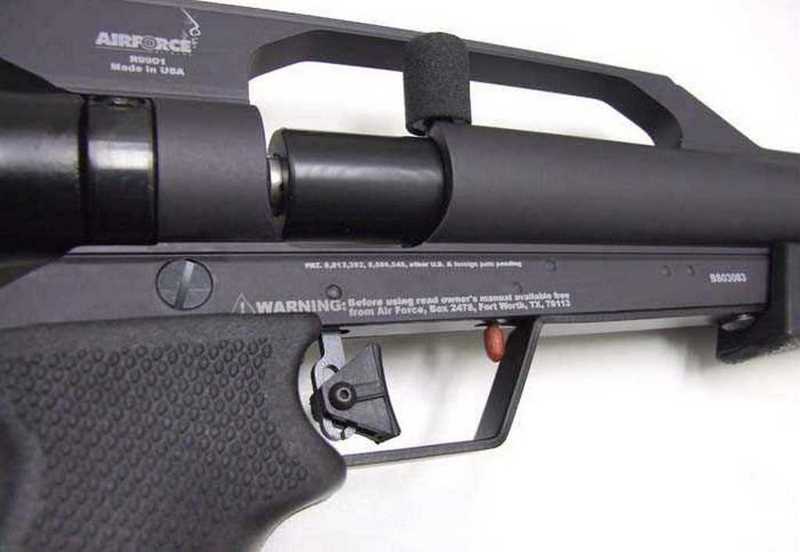 The trigger has an adjustable finger pad. Slide it low for the lightest trigger-pull. The red knob in front is the rifle’s automatic safety that is pushed forward to release.

Style and construction
AirForce rifles are all styled with a black rifle look. They are based on an aluminum frame that houses the action and barrel. Only the air reservoir, which also serves as the butt, is separate. There are two frame sizes. The AirForce Talon has a short frame, and both the SS and Condor have a long frame. The Condor has a longer carry handle than the SS, but otherwise the two frames are identical. Because of that, the SS can easily accept the optional 24-inch barrel, which effectively doubles the gun’s power with the same amount of air. I will explain more about that in a future report, but it’s one advantage you get from a shooting system, rather than a single rifle whose caliber and barrel length cannot be changed.

The frame has long 11mm dovetails along its upper and lower surfaces, as well as the top of the carry handle. As a result, the rifle can accept all manner of accessories like lasers, scopes, night vision, tactical flashlights, sling swivels, bipods and much more. It’s like a Christmas tree that’s ready to accept any and all ornaments you desire.

The construction of the rifle lends itself to manufacture by a CNC center rather than more costly human labor. As a result, AirForce is able to keep up with the thousands of orders they fill each year. They still have a workforce, of course, but they do the jobs for which machines are not adapted and those jobs requiring skills.

The finish has been a black anodizing since the beginning, but a couple years ago AirForce started offering guns in other colors — red and blue. They’re keeping their options open for other colors, though at present black still seems to be most in demand.

Plastic parts
There are parts of the gun that are not made of metal. The trigger shoe, bolt, power adjuster wheel and a few other parts are made from modern synthetics. The material for each part was chosen for its performance and not for manufacturing economy. As the airgun world learned from the Logun S16, an all-steel air rifle can also be a boat anchor when the weight gets to be too much. That isn’t a problem with the Talon SS, which weighs just 5.25 lbs.

Highly convenient
The light weight is coupled with a cocking effort of just 4 lbs., making the SS a breeze to carry and shoot. Because the weight is low, a larger, heavier scope does not weigh down the rifle like it would many PCPs, so the SS can accept a scope that’s up to its long-range capabilities. I personally find a 4-16x scope to be about ideal for both the SS as it comes from the factory and also when I install the longer barrel and double the power. The AirForce 4-16×50 scope is a perfect match for both the SS and the Condor.

Calibers
I maintain that the .22 caliber is best for the Talon SS, given its power potential. In factory trim, you can expect it to develop 23-25 foot-pounds maximum with accurate pellets. That can be boosted to 40-45 foot-pounds when the 24-inch barrel is added. Of course, any of the four smallbore calibers will work well with the rifle, and the beauty is that you don’t have to choose. Start with one caliber and add the others as you feel so inclined. The rifle I’ll be testing for you in this report will be a .22 caliber.

How the rifle comes
One of the things a reader had confused when we talked about the Talon SS a few weeks back was that the rifle can be ordered with or without a fill clamp. He’d purchased a used gun and didn’t get to see it as it comes from the factory, so I’ll show that here. 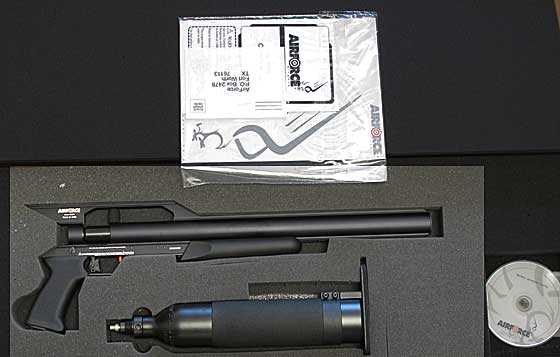 The Talon SS comes in a cardboard box with fitted foam inserts holding the rifle and air tank, a DVD of the owner’s manual, a paper owner’s manual, AirForce catalog and warranty card. If it was ordered, the fill clamp also comes in the box. The section containing the rifle has been brightened to show the dark gun more clearly.

The rifle is sold with or without a fill clamp so people buying multiple rifles don’t have to continue to pay for parts they don’t need. Many owners of AirForce rifles own more than one gun. I own three, and I think blog reader twotalon’s handle speaks for itself. So, AirForce made it easier to buy the rifle in the configuration that you need, rather than paying for parts you already have.

I have a special fill adapter that’s much simpler than the AirForce fill clamp and works better with the carbon fiber tank I use to fill the gun. I’ll show it to you in a future report.

Summary
This is where I’ll end this report, though there are several more general topics to address. I’ll cover them as we encounter them during the extended test. I’ll even show you how easy it is to replace barrels when I switch from the 12-inch barrel to the 24-inch barrel. Please ask your questions as we go, and I’ll try to answer them in the body of the reports that follow.