The UTG stock is attached to the Crosman 2240 with the adapter and extended as far as it will go.

Today, I get to shoot the Crosman 2240 air pistol as a carbine. Thanks to the adapter from R. Arms Innovations and the adjustable UTG 6-position Mil Spec AR stock, my 2240 is now a handy carbine. Allow me to explain why that’s such a good thing.

2240 is accurate!
Many years ago, when I knew much more than I do now, I wrote an article for Shotgun News about some vintage air pistols — specifically the Crosman Mark I Target pistol and the Smith & Wesson 78G. Both vintage air pistols have superb handling and light, crisp triggers, not to mention their fine adjustable sights. I was writing about how the golden age of target air pistols had ended 30 years earlier, and I included a Crosman 2240 pistol in the article, just for comparison. You know — so people could see how far things had slipped over time. Imagine my chagrin to see the 2240 turn in the best results of the test, despite having a much cruder trigger and sights that were as simple as a door latch. I wrote the article that way, admitting my surprise that the current gun bested the two golden oldies, despite lacking all of their sophistication.

Sometimes, I think of myself as the Charlie Chaplin of writers. I’m always doing things my readers know will explode in my face, and I guess it’s funny to watch — or, in this case, read. Anyhow, the Crosman 2240 rubbed my nose in it real good that time!

We now have a chance to let the 2240 sprint like the thoroughbred that it is. The peep sight that comes on the pistol could not be used when it was a pistol; but with this adjustable stock attached, it can now come into play.

One more thing I learned in today’s test. I thought I had the stock adjusted perfectly when we began. It was set up for the Benjamin Marauder pistol that has a scope mounted on it, and what I didn’t consider when switching over to the 2240 was how far my eye would be from the peep hole. Fortunately, the UTG stock adjusted one more click in, and then the peep sight was in the right place. That’s why an adjustable shoulder stock is better than a stock of fixed length when you’re trying different air pistols like I am.

Sight-in
One reason you read this blog is the occasional tip you get. Well, today’s the day! The 2240 uses a standard rear sight that has a peephole on the same plate as the notch. Simply flip the plate over (you have to take it off the sight to do this), and the peep is available. It isn’t a precision target aperture, but neither is the peep sight on a Garand, M1 Carbine or M16, for that matter. 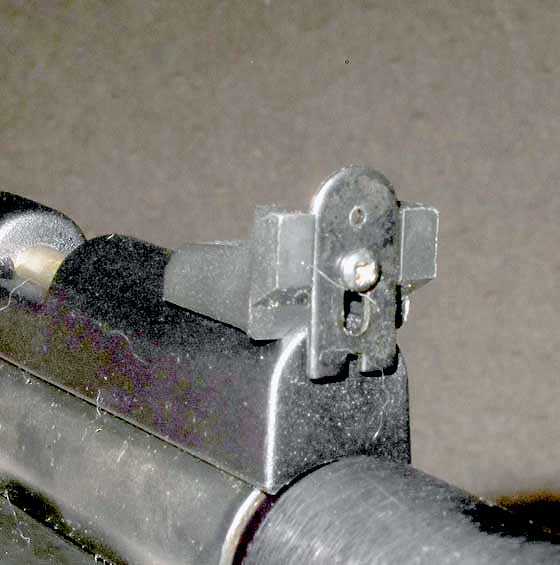 The rear sight has both a notch and a peep hole. They adjust in both directions, but the adjustments are somewhat crude. Loosen the screw and slide the plate up and down for elevation. For windage, the entire sight slides a little side-to-side.

You adjust elevation by sliding the peephole up and down — always moving in the direction you want the shot to move. There is also some sideways adjustment by sliding the whole rear sight side-to-side, but it’s not much. On my gun, it didn’t go far enough. This is where the tip comes in!

If you can’t move the rear sight, maybe you can move the front, but on the 2240 the front sight is fixed. Ahh…but the barrel isn’t fixed! So, you move the barrel instead of the front sight. Two Allen screws on the forward barrel band (one on top, the other on the bottom) are loosened, and the barrel is pushed from side to side. But there’s a catch. 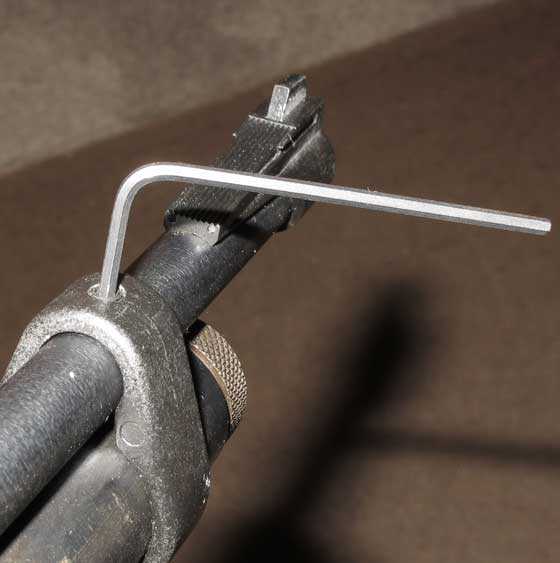 Allen screws at the top and bottom of the barrel band are loosened, and the barrel’s pushed in the direction you want the pellet to move.

It took me 6 shots to get in the bull at 12 feet, then the sights (and the barrel band) were locked down. I moved back to 10 meters and started shooting. A confirmation shot was close to the center of the bull, so the sight-in went perfectly.

Accuracy testing
The first pellet I tried was the 14.3-grain Crosman Premier. As I was shooting the group, I could see that all the pellets were hitting inside the small bullseye. But after shot 6, the hole they were making became large enough to see from 10 meters. I know that 0.84 inches for 10 shots at 10 meters doesn’t sound very good, but it looks better when you see the hole! 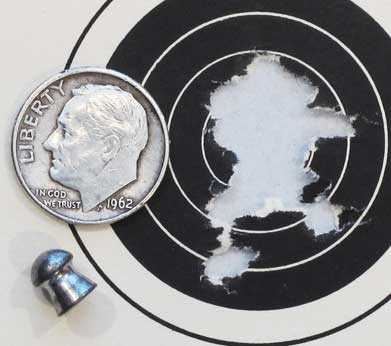 Ten Premiers went into this 0.84-inch group at 10 meters. The number is large, but the group looks good.

Next, I tried some RWS Hobbys. They usually do well in guns like the 2240; and on this day, they didn’t disappoint. The first 8 went into a group that measures 0.462 inches between centers, but then the gas pressure started to drop. I could hear it happening, but I continued shooting. Shots 9 and 10 dropped below the main group, opening it to 1.043 inches. If only I’d stopped when my gut instincts told me! 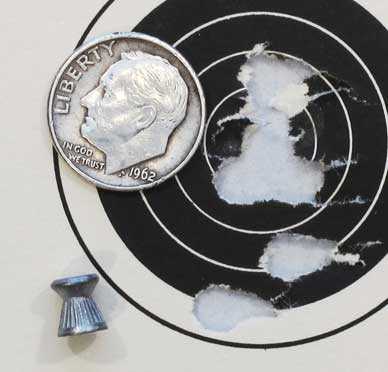 Eight Hobbys went into the main group that measures 0.462 inches. The final 2 pellets dropped below and opened the group to 1.043 inches.

This group made me mad because I knew that my 2240 uses CO2 pretty fast. In fact, I debated shooting the second 10-shot group because sight-in and confirmation had already used up 7 shots. I knew my gun had 25 shots on full power. I guess I just tried to scrape by, and this is what happened.

So, I changed the CO2 cartridge and started again. This time, I shot JSB Exact RS pellets, that I expected to do the best of all. And I think they did. Nine of 10 shots went into 0.497 inches, and one shot strayed to the left, opening the group to 0.698 inches. I don’t actually know which of the 10 shots is off to the left because I never called it. 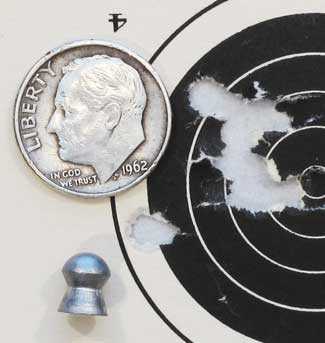 Nine JSB Exact RS pellets went into 0.497 inches, and that one on the left opened it to 0.698 inches. It’s still the best group of this test!

Summary
The R.A.I. adapter and UTG 6-position adjustable stock were made for the Crosman 2240. I love this little air pistol, and these accessories turn it into a handy carbine. The sights are crude; but as these groups demonstrate, you don’t need target sights to do a good job.

No, I’m not going to shoot this gun at 25 yards. Sure it can do it; and yes, the groups will all be larger. With a gun like this, 10 meters seems like a comfortable distance to me.