Today, we’ll start looking at the new Walther LGU air rifle. It arrived last Saturday, and I knew that the first glance would tell me a lot — which it did. The box is large, strong and beautiful. No pictures of a gun — no freeway overpass advertising. Just a classy, subdued gray over the entire rugged box. I guessed that what was inside was something the manufacturer was proud of.

The grand opening…
When I saw the rifle for the first time I knew Walther had done it right. I will describe this in detail, so you can enjoy it with me.

The LGU is an underlever sporting rifle that comes in both .177 and .22 calibers. I ordered the .177 because I thought it looked poised to go after the TX200 Mark III market. Now that I’ve seen it in person, I can say — Air Arms — watch out. There’s a new kid on the block, and he’s gunning for you!

This is a large rifle. It weighs around 9.5 lbs., depending on the density of the wood. My test rifle, which is serial number BU002269, weighs 9 lbs., 11 oz. The stock is thick and has finger grooves that run down each side of the forearm. The pistol grip is finely checkered and feels rough to the touch. You want that for its gripping power. There’s a Walther logo carved on both sides of the bottom of the checkered panels.

The stock is a very smooth and even beech. The forearm ends in a schnable shape that’s split for the underlever. The butt has a thick black recoil pad for slip resistance. Make no mistake, they pulled out all the stops when they made this one!

The metal on the spring tube is finished to a deep mirror shine that’s colored a perfect black. No Colt Python with Royal Blue ever looked better! Both the barrel and underlever are finished one order of magnitude less shiny, which makes them about equal to the best finish on a Weihrauch rifle.

Trigger
I love the width and shape of the LGU trigger! It feels like a rifleman’s trigger when I hold the rifle to my shoulder. The trigger blade is the only plastic you’ll see on the outside of the rifle, but it’s so right that I don’t see how anyone can complain.

The safety is automatic, and the switch is centered on the rifle’s tang — like a shotgun safety. That makes the LGU 98 percent ambidextrous. Only the loading port favors right-handed shooters over lefties.

The trigger is 2-stage and adjustable, and I see 2 screws that appear to be for that purpose. I’ll be doing that so I can report on. But wait! There’s more!

A special metal trigger
According to the owner’s manual, there’s also an optional trigger called the “metal tuning trigger” available for the LGU. Well, I checked with Umarex USA, and this trigger is one they’ve had since the LGV rifles came out. It’s so complex to install that Walther voids the limited lifetime warranty if anyone else outside Umarex USA does the work. I got the impression that this trigger is not worth the effort to install, and they won’t be offering it in the future.

Loading port
The LGU has a sliding compression chamber, like many other underlever airguns. This one has 2 deep notches in the side, so the ratchet can catch the chamber before it’s fully cocked. This is additional protection for your fingers when loading the rifle, though you should make a practice of never letting go of the underlever while loading. When the breech is loaded, press in on the front of the latch located just behind the loading port and slide the compression chamber forward by returning the underlever to the stored position. 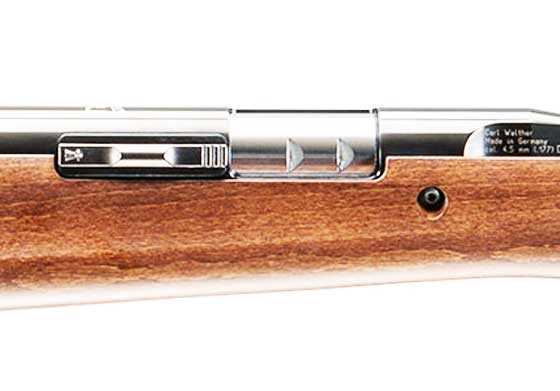 A lot of similarity with the TX in the loading port area. That latch is pushed at the front to close the sliding chamber.

The underlever is held in place by a ball bearing detent. Two rubber o-rings around the end of the lever keep all vibration at bay, though they don’t actually touch the muzzlebrake.

The barrel is 11.81 inches long. The large muzzlebrake is just for show. The space inside is empty.

The underlever catch looks like it was taken directly from a TX200 web page of recommended field modifications.

Firing behavior
I will address the firing behavior more in the future reports, but I just had to shoot the gun right now. Look out, TX, because the LGU is calm when it fires!

Sights
A rifle like this does not have open sights because you’re expected to scope it. For that, Walther has provided parallel 11mm grooves in the spring tube with three vertical scope stop holes. It’s a very conservative and welcome arrangement, because it makes mounting a scope so easy.

I have a dream!
My dream is that this rifle is just as accurate and just as insensitive to hold as a TX200 Mark III. If that’s the case, we’re going to see a lot of these on the field target circuit.

If I’m right, I will do a head-to-head accuracy test that pits the 2 rifles against each other. I will shoot them both off a UTG monopod that I am going to begin reviewing for you very soon. But I will only do this if the LGU I’m testing is as accurate and insensitive to hold as my TX. Otherwise, there’s no reason for that test. 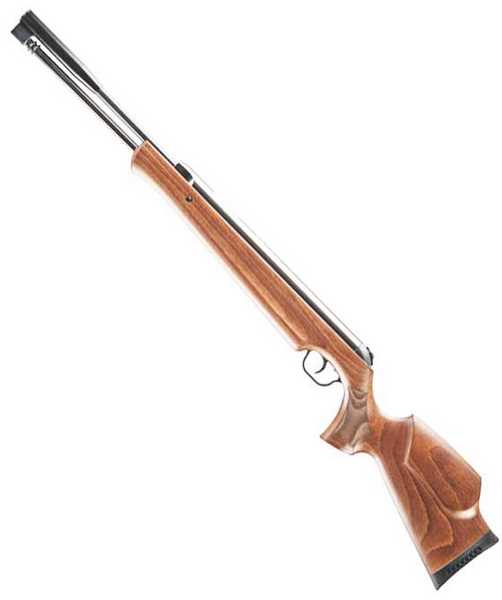 Walther’s LP III: A single-stroke from the past