Okay, back to work. Let’s start a look at Hatsan’s powerful precharged pneumatic air rifle (PCP) — the BT65 QE. I know this rifle has been out there awhile, but I just reviewed the AT44-10 Long QE last July, so I’m slow all around. That rifle was so accurate at 50 yards that I took it out to 100 yards — something I seldom do.

Today’s rifle is different
But today’s rifle is different. It looks very similar to the AT44-10, and it’s a 9-shot repeater (in .25 caliber, 10 in .177 and .22). But the BT65 is more powerful. It’s also very long, though that adjective is missing from the title. In short — this is the big one. I ordered it in .25 caliber because I have something special I want to do with it. But more on that later.

One reason I want to test this rifle because this is the platform Hatsan used to create their new big bore Carnivore rifle. They’ll soon be sending me one of those rifles to test, so I wanted to get the base rifle tested first.

BT65 rifle specs
The BT65 I’m testing is a very large! It’s just short of 49 inches long, which is very long for a rifle. It weighs 9.3 lbs. without a scope. So it’s a handful, or more correctly, a double handful!

The metal parts are finished to a satin sheen, and the stock is black synthetic. There are very few plastic parts on this rifle. I’m testing serial number 0914 21707. This rifle comes without sights.

I’m testing the rifle that has a conventional stock with an adjustable comb and an adjustable buttplate. Both the buttplate and comb adjust up and down. The buttplate also adjusts in and out to change the length of pull. What that means is that, with these 3 adjustments, you should be able to adjust your rifle to suit yourself quite well. I can see problems for smaller shooters, though, because this rifle is large even when all the adjustments are at the minimum. Think about that before you order one.

Compared to the BT65, an M1 Garand feels small, and an 03A3 Springfield feels like a carbine! I guess the closest pellet rifle comparison would be a Beeman R1. But the BT65 is even larger.

For 10 dollars LESS than the test rifle costs, you can buy a 7-inch shorter rifle in a walnut stock with the same adjustments but not silenced. That rifle comes with adjustable open sights. How they do that for less money is a mystery, but I would pick the walnut for casual plinking and the synthetic for hunting. But — does anyone seriously think they will plink with a 52 foot-pound .25 caliber air rifle?

A third variation of the rifle is also 7 inches shorter than the one I’m testing and comes in a synthetic thumbhole stock with the same adjustments as the other two, but it’s also not silenced. Pyramyd Air lists the power output the same for all 3 rifles, and their barrels are of similar lengths, so that might be the case. The thumbhole stock model also has open adjustable sights.

I know from reading reviews that this rifle is supposed to be very accurate. After experiencing the AT44-10, I have no reason to doubt that. And the letters QE stand for quiet energy, meaning all these rifles are silenced with a barrel shroud. I will tell you how loud the rifle is when I test the velocity in Part 2.

I looked down the barrel with a bright flashlight and can see baffles in front of the true muzzle and also a section near the shroud’s muzzle that has numerous holes in the walls for gas bleedoff. Hatsan has put some thought into how to quiet this beast! The actual muzzle of the rifled barrel ends deep inside this shroud.

Knowing this is a hunting rifle, as they provided sling swivels and loops, front and rear. Anyone who has carried 11 lbs. of rifle very far (rifle and scope) knows what a blessing this is.

Hatsan has made a base on top of the receiver that gives you the option of using 11mm scope rings or Weaver rings. That’s good marketing and great design!

Let’s talk price
The BT65 is a powerful repeater made for hunters. Given it’s specs, the price is just about as low as could be expected. If it proves accurate, it’ll be a great value. If it’s also quiet and has a good trigger, I can see it becoming a best buy.

Quattro trigger
Speaking of triggers, the BT65 comes with Hatsan’s Quattro trigger, which is adjustable. When I tested the AT44, I found the Quattro to be quite adjustable, if a little vague as to where stage 2 is. I’ll adjust the trigger on this rifle and make a similar report on my success.

I first tested a Quattro trigger on a Hatsan spring-piston rifle. I have to say that I wasn’t thrilled about its performance there. But on a PCP, where it isn’t restraining more than a hundred pounds of spring force, the Quattro is pretty nice. I imagine it breaks in to work even better; but as fast as I test these guns, that’s something I’ll never see.

Automatic safety
The manual says the rifle has a manual safety, but the rifle I’m testing has a safety that goes on when the bolt is pulled back. That’s an automatic safety. The description on Pyramyd Air’s website mentions this. It make no difference to me — once you figure it out you can take the safety off as needed and whenever you want to. 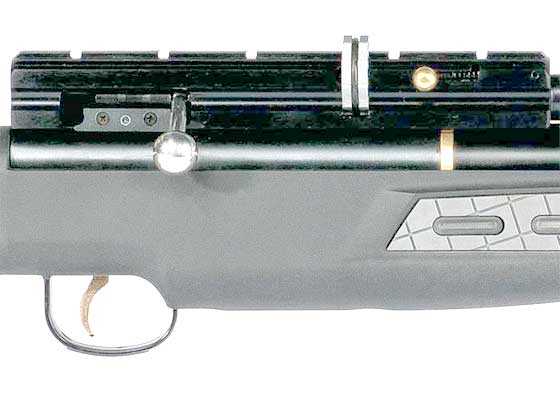 Hatsan BT65 QE bolt. To cock the rifle, just pull the bolt straight back and return it again. To remove the clip, lock down the bolt handle in the rear slot to hold it out of the way. See how the clip sticks up above the top of the receiver? You must use 2-piece scope rings to straddle it.

Circular clip
The BT65 has a 9-shot circular clip that sticks out above the top of the receiver. Any scope has to clear this clip, so 2-piece scope mounts are a must. The clip releases straight out to the right, so no scope clearance is needed to remove and install it. Replacement clips are available in all 3 calibers, but they’re listed as mags. They also fit other Hatsan PCP airguns.

To remove the, clip you first pull back the bolt and lock it down in its slot. Then, push the brass bolt that holds the clip forward and up, and the clip pops out to the right. Installation is the reverse, and you may have to jiggle the clip before the brass clip bolt will slip back to its locked position.

My plans for this test
This test will include the traditional 3 parts (description, power, accuracy), but I might need to stretch that a little to get everything in. The rifle doesn’t have adjustable power, but the 3 ways the butt adjusts need to be treated well, because they are significant. And, of course, there’s the adjustable trigger.

All in all, this test should prove interesting.