Airgun Academy videos are back!

The Airgun Academy videos are back and number 35 — The artillery hold — is ready to be viewed!

Look for more videos each week. Now let’s get to today’s report.

Today I take the Air Arms S410 TDR Classic out to 100 yards, to see if the accuracy we saw at 50 yards in Part 4 continues. This will be an interesting report for all who think that going from 50 to 100 yards means simply doubling the size of the groups.

You really should read Part 4 again, because that was where I finally learned how the test rifle wants to be operate and what pellet it likes best. When I started today’s 100-yard test, the rifle was set exactly as it had been for 50 yards and I was careful to fill it to 2900 psi with the Air Venturi G6 hand pump.

I shot the rifle off a sandbag rest that was sitting on a concrete shooting table. The day was cold (37 degrees F) and the air was dead calm. I used the 16-grain Air Arms dome that was the most accurate and consistent pellet at 50 yards in part 4.

The first shot took some time getting downrange, but since there was no wind that wasn’t a problem. The shot landed 30 inches below the aim point. The rifle was sighted dead-on at 50 yards, so that gives some idea of how much drop there is. We know from velocity testing in Part 2 that the pellet starts out traveling about 760 f.p.s. on this power setting. The amount of drop was not disconcerting to me. I expected it and had the target stapled on top of a 24-inch by 48-inch backer paper — just so I could get the groups.

Ten shots made a group that measures 4.082-inches between centers. The first 2 shots landed high, then the next 8 dropped about 2 more inches. Those last 8 shots grouped 2.754-inches, which is a lot tighter than the group of 10. I think the first 2 shots were either waking up the rifle’s air valve or else the pressure in the reservoir was slightly too high. 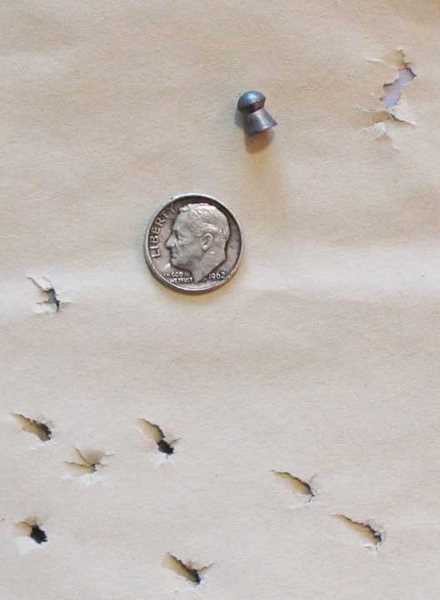 At 100 yards, 10 shots landed in 4.082-inches, with 8 of them in 2.754-inches. The center of this group was 30 inches below the aim point. Notice the tearing is all going in the same direction. The pellets were all tipped the same way when they hit the paper.

Notice what is happening

The size of the group is just part of the story. It’s also important to examine the holes, as they give us some very important information. Most of the holes in the group of 8 that landed lower are torn sideways. The pellets didn’t pass through point-on. The pellets had tipped in flight and were passing through the paper on an angle. They might have been wobbling around their long axis in flight, but the angle of the tip seems constant, so it’s a good guess that they were yawing in flight — tipping to one side and holding that tip consistently all the way downrange. That yaw would have slowed their flight, because more of the pellet was exposed to the air stream.

It’s difficult to say whether the 2 pellets at the top have tipped, because the hole they made in the paper is not distinct. But that difference between these 2 holes and the 8 holes below made me wonder if driving this pellet faster would correct whatever was happening in flight. So I cranked the power up almost all the way and loaded a second magazine.

On high power the pellets dropped about 24 inches at 100 yards, which is 6 inches less than they dropped on medium power. Ten pellets landed in a group that measures 4.516-inches between centers. That means the power setting that was most accurate at 50 yards (medium) is also most accurate at 100 yards. This high-power group is more vertical than the first one. 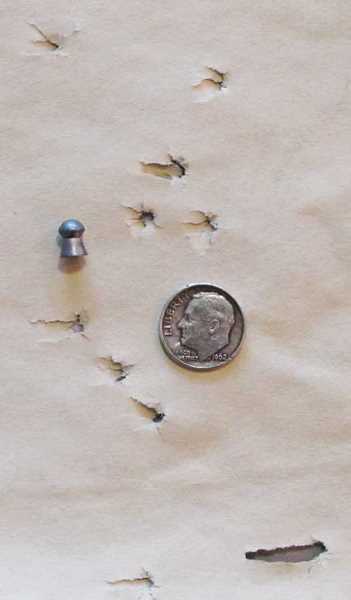 Shooting on high power at 100 yards, 10 shots landed in 4.516-inches, in a very vertical pattern. This group was 24 inches below the aim point. The tears are still going in pretty much the same direction.

You can see by the holes that the pellets are still passing through the paper tipped. The orientation appears to be similar that of the pellets in the first group, though the amount of tipping looks to be a little less on high power and a couple holes don’t have it at all. If I am right about the pellets yawing, and the results of this group do seem to confirm that they are, then it appears the S410 TDR isn’t driving this pellet fast enough to stabilize it out to 100 yards. It always flies in a tipped orientation.

From the results of this test I conclude that the Air Arms S410 TDR is accurate to 50 yards, but beyond that range, the Air Arms pellet is probably not the best pellet to use in this rifle. More testing would need to be done to find a pellet that would fly true to greater distances.

Yesterday we talked about the stability of round balls when spun by rifling. Today we see some results of a diabolo pellet at a distance where instability shows up visibly. Diabolo pellets are supposed to stabilize themselves (fly point-first) in flight because they fly with their weight forward like darts, and also because their flared skirts and hollow tails create drag that should make them point straight ahead. Today we see that doesn’t always happen. This is where testing in the field trumps reading on the internet. Sometimes things just don’t go as you think they should, and you have to experience it.

This is the last test I have planned for the S410 TDR. Yes, I could probably find a better pellet and get tighter groups at 100 yards, but that wasn’t why I tested the rifle at this distance. I did it to see what would happen to an accurate rifle when the distance went from 50 to 100 yards. As you can see — it is not linear. That is the teaching point today, I think