Today we take the Air Arms S410 TDR Classic to the range. If you recall, I got good stable velocity with the power selector set on medium power, so I left it set that way for this test.

The G6 pump has a luminous dial!

You may also recall that I am filling the TRD with an Air Venturi G6 hand pump. I do that because the TDR has an Air Arms proprietary fill adaptor that nothing else fits, so I attached it to the G6 for this test. The velocity test suggested there may be as many as 30 good shots from a fill to 2900 psi, and filling the rifle to that pressure isn’t hard to do. But the morning I was at the range I discovered something curious. The G6 pump I’m using has a dial that glows in the dark!

I was at the range about a half hour before dawn and noticed the dial on the G6 glowing faintly when I set it up, So I hit it with my Pelican model 1920 flashlight for about 10 seconds and the dial lit up like Broadway! I was able to fill the rifle to almost full and only had to check the dial with my flashlight for the final few pump strokes, because I could see the needle against the dial so clearly.

Many things to test

The S410 TDR has variable power, so testing it gets complex quickly. Not only do I have to test several pellets — I also have to test them at different power settings. To simplify things I started the test with the JSB Exact Jumbo 15.89-grain dome and the rifle set on the medium power level from the velocity test.

The rifle had not been sighted in yet, so the first shot landed off the target paper at 50 yards. I always back up my targets with a larger piece of paper when sighting in, so I found the pellet hole and made corrections to the scope. Shot 2 landed 2 inches to the right and 2.5 inches high, so I counted the clicks on the scope and adjusted it to what I thought would be the center of the bull. My next shot hit within 1/4-inch of the center of the bull, so I stopped adjusting and fired the remaining 7 shots into the same group. The rest of the test was shot with the same scope setting.

The 8-shot group that resulted measures 1.079-inches between centers. It’s a little to the right of center. 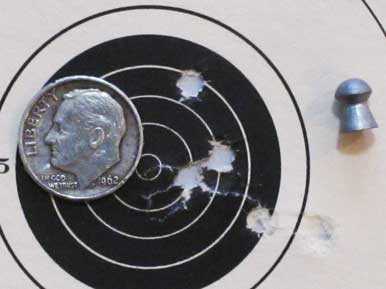 Here are 8 of the first 10 JSB Exact Jumbo domes in 1.079-inches between centers.

The point of the test

The whole point of this test is to see if the pellets strike the same point for all three magazines. We know that on medium power the velocity starts to drop on the third magazine, so this will show on paper what that does.

The second group on the same fill also struck the target slightly to the right, but this time the center of the group was about a half-inch lower than the first group. Even though the average velocity is the same for both magazines (from the velocity test in Part 2), the impact point dropped one-half-inch at 50 yards. This group of 10 pellets measures 1.436-inches between centers. The lowest shot in this group was the last shot, so I know the rifle is slowing down at this point. 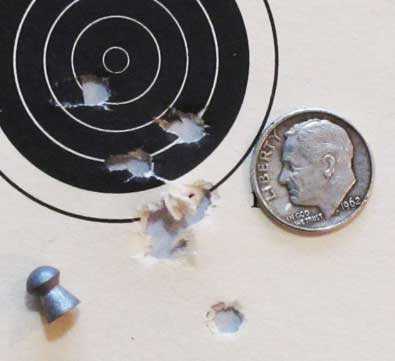 The second 10 JSB Exact Jumbo domes on medium power went into 1.436-inches between centers at 50 yards. The center of this group is about one-half-inch lower than the center of the previous group.

We know from the velocity test that the third group is losing velocity, and it also has the biggest velocity swing between the first and last shots. On paper that looked like a very vertical 1.982-inch spread for 10 shots. 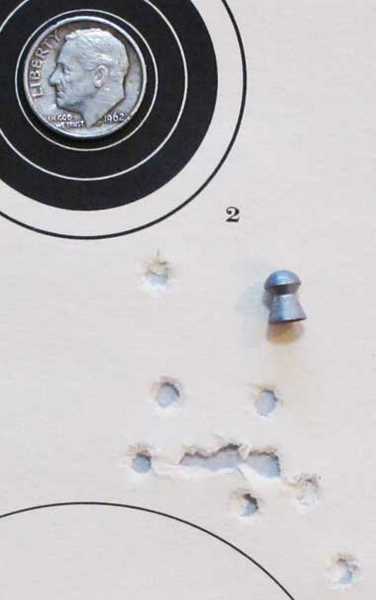 The third 10-shot group of JSBs at 50 yards is 1.982-inches between centers and the point of impact has dropped about 2.25 inches from where the first magazine hit. The dime is on the aim point.

Analysis of the first series

The first series of the threeTDR 10-shot groups tells me two things. First — there aren’t 30 good shots with this JSB pellet on medium power. Second — the JSB Exact 15.89-grain dome is probably not the best pellet in this rifle on medium power. Remember this rifle has adjustable power, so there is a lot more to test than just accuracy with different pellets.

Next I filled the rifle again and adjusted the power as high as it would go. Then I shot one more 10-shot group with the JSB pellet. This group landed about 2 inches above the aim point and just to the right. It measures 1.602-inches between centers and is more vertical than I like. That ended my tests with the JSB pellet. 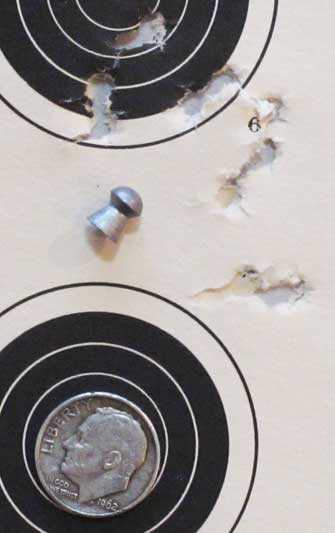 Ten JSB pellets on high power went into 1.602-inches at 50 yards. The POI is about 2 inches above the aim point, which is beneath the dime.

No sense shooting this pellet any more. Clearly it is only okay at best in the TDR. I think the rifle can do better. Time for a change.

I had brought a tin of H&N Baracuda Match pellets, hoping to test them next. But when I tried to load them they wouldn’t go into the magazine. Oh, no! They were .25 caliber pellets that had been placed in my .22-caliber pellet pile. I didn’t have my glasses on when I packed the ammo, and I brought the wrong caliber. I bet some of you have done the same thing a time or two.

Not to worry, because I did have another pellet to test. The 16-grain Air Arms dome is very similar to the JSB pellet I just tested, but enough different that I thought I would give them a try. This would be the second magazine on the fill with the rifle set on high power.

Ten Air Arms domes landed in a group that measures 0.889-inches between centers, which is the first encouraging 50-yard group I have seen from the TDR. Perhaps I have found the right pellet — or at least one of several the rifle likes. The point of impact is 1.5 inches above the point of aim and just as far to the right as the JSB pellets have been striking. 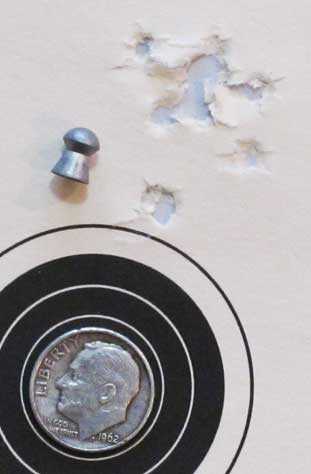 Ten 16-grain Air Arms domed pellets went into 0.889-inches at 50 yards on the second magazine after the fill. This was on high power. The POI is about 1.5 inches above the aim point ( under the dime). This is the kind of group I was hoping for.

End of the test

This is where I stopped testing the rifle on this day. Now that I have one good pellet the plan is to return to the range and re-run the test with high and medium power using the Air Arms pellets I now know to be good. I will throw a couple other premium pellets into the box next time, so we get a better look at the rifle’s potential. 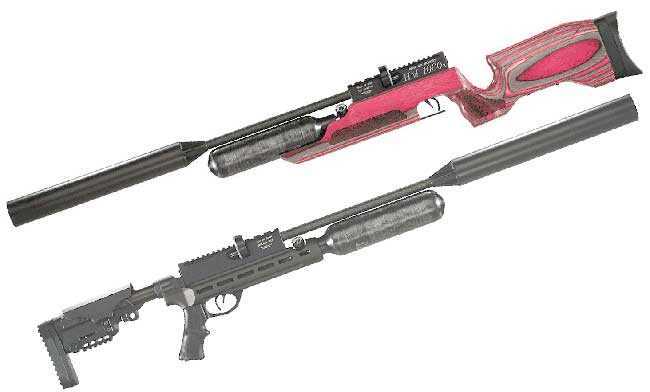