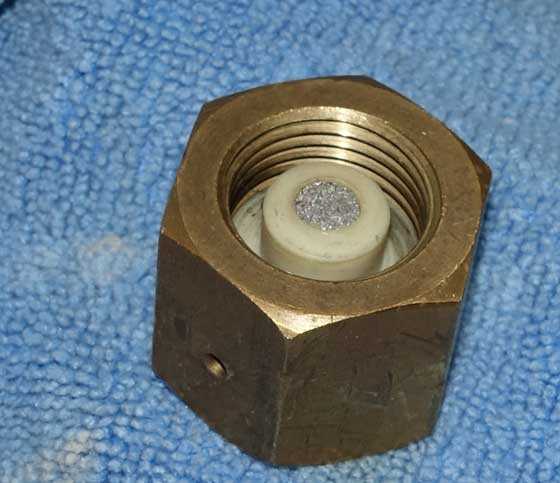 We are looking at a used FWB model 2 10-meter target pistol that runs on bulk CO2. I found this pistol for reader Mitch, who asked if there were any good target pistols for under a thousand dollars. I told him to look at used guns, and to look at the best brands. I found this one on the American Airguns classified ads page and, when Mitch decided to pass on it, I bought it. The whole story is in Part 1.

Not only was this a super buy, this is the very first FWB target pistol that had modern features. The target pistols prior to the model 2 were the FWB 65/80/90 which all had spring piston powerplants. They were great for their day and are still fine airguns today, but the refinements of the model 2 are a more adjustable trigger, adjustable power and better weight and balance.

Today we will test the velocity of this pistol. It came with a CO2 adaptor that couples the two removable CO2 reservoirs to many bulk CO2 tanks, such as 20-pounds tanks (that’s the weight of the product they hold — not their gross weight) that will be found in soft drink dispensing equipment and fire extinguishers. But the FWB adaptor that came with the gun has a built-in filter to trap dirt. That filter makes it necessary to modify the CO2 bulk tank valve to accept the filter.

The center of the tank output valve has to be drilled out to accept the FWB adaptor. Otherwise, the adaptor will not attach to the tank. A half-inch drill bit is perfect for this job, but we found the cutting angle had to be reduced from 45 degrees to a very shallow angle of perhaps 10 degrees, to keep the bit from seizing when cutting the soft brass of the valve. I say “we” because my shooting pal, Otho, did the drilling for me. I don’t own a half-inch hand drill.

The FWB CO2 adaptor has a filter in the center that traps debris. But that filter cannot enter a standard CO2 tank valve fitting. 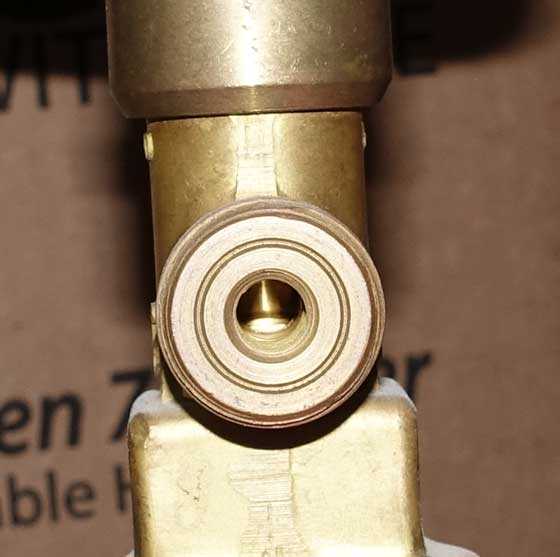 This standard CO2 tank outlet is too small to accept the filter of the FWB fill adaptor. 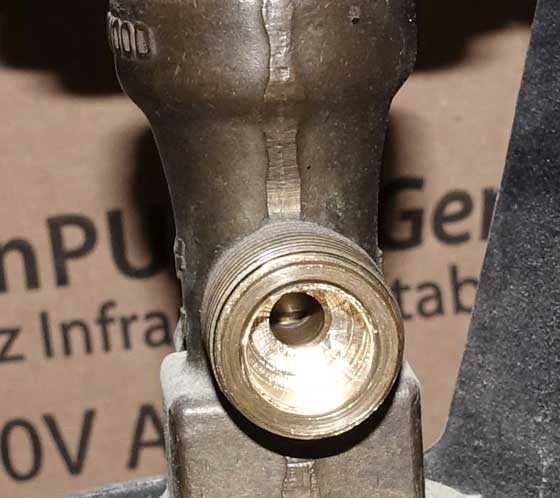 By drilling out the center of the outlet on the bulk CO2 tank, the FWB adaptor fits perfectly.

Once the adaptor is fitted to the bulk tank it’s time to fill the pistol’s 2 reservoirs. The FWB manual tells you to put the removable reservoirs in the freezer for 30 minutes to cool them to accept a full fill. I did this, then screwed each reservoir to the fill adaptor and opened the bulk tank valve. It takes only a couple seconds to fill each reservoir, and when they are filled you turn off the valve on the tank and just unscrew the reservoir. An exhaust port in the adaptor bleeds the residual gas that’s trapped and the reservoir comes off easily. 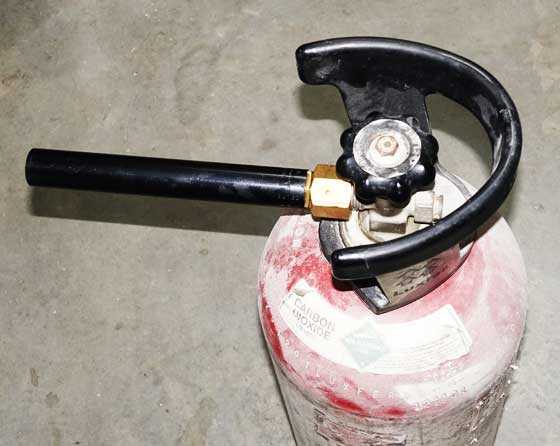 Open the valve for a couple seconds and the chilled reservoir is filled full. Weigh the reservoir before and after to ensure no more than 53 grams of CO2 have been put into the reservoir.

Attach a reservoir to the gun

Now simply screw one of the reservoirs on the gun and you are good to go. Take the dry-fire switch off the dry-fire mode and the gun will fire. 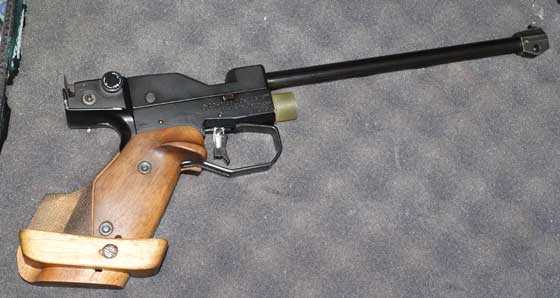 The pistol without a reservoir. A vintage protective cap came with the gun to either seal the gun as it is here or to put over the threads of the reservoir that’s not in use.

To cock and load the pistol, lift the cocking arm on the left side of the receiver. The bolt will retract for loading. Place a wadcutter pellet into the trough, nose pointed forward and close the lever. The pistol is now ready to fire.

I began with Qiang Yuan Training pellets. I had been playing with the power adjuster, so the first velocity was low, at just 341-360 f.p.s. So I turned the adjustment screw in a turn and a half and got an average 532 f.p.s. That was too fast, so I adjusted back down again. I was looking for an average around 460-480 f.p.s. 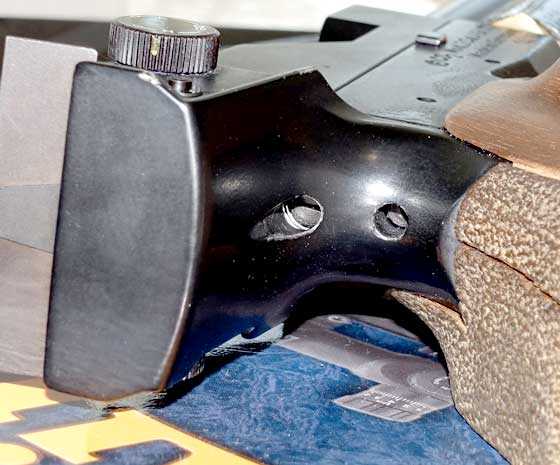 It took me about 4 tries to get the pistol shooting at the velocity I wanted. The reason is because the pistol requires several shots after each adjustment to settle down again. Until then the velocity varies widely — as much as 60 f.p.s. I also discovered that when the gun is first fired each day the valve needs several shots to wake up. Since this gun is entirely new to me, I decided I would test this phenomenon.

After getting the velocity with Qiang Yuan Training pellets stable at 477-487 f.p.s., I put the pistol up for the day. The next morning I got it out and shot it again. Nothing has been changed since the day before. Now, however, the velocity varied between 483 and 542 f.p.s. — obviously a shift upwards.

I adjusted the power down and got the velocity between 407 and 505 f.p.s. Yes, it’s really spreading them out that much! I have a theory about what might be happening, but allow me to continue for now.

I adjusted the power again and continued to shoot. The velocity dropped to 399 f.p.s. on one shot and I wondered if the reservoir was out of gas. I used to shoot a Chameleon CO2 target pistol that used CO2 cartridge or was filled from a bulk-fill tank. Bulk-fill was how I used it. I got about 70 shots on a good fill from that one and I figured I’d get at least 150 from these larger reservoirs. But I switched tanks anyway at this point.

I am explaining all of this for the benefit of new shooters who may encounter the same problems. I know this sounds like a downer, but I hope to get the gun up to spec before this is over.

At this point I read the manual and discovered that the reservoir should get 53 grams or less of CO2 liquid with a fill. Compare that to what’s in a 12-gram CO2 cartridge and you see how much gas this gun carries. It should get 150-200 shots easily with that much gas.

Leaving the pistol on the same power setting that gave me 411 to 475 f.p.s. with the Chinese pellets I now tried RWS R10 pistol pellets. These spread out between 445 and 502 f.p.s.

Clearly this pistol doesn’t want to shoot any target pellets with consistency. And I may know why. When I was buying the gun Carel told me he had gone through the powerplant and cleaned and lubricated the parts. That sounds good, but FWB target pistols don’t need much lubrication on their powerplant parts. Excess lubrication could be causing the wide velocity swings.

The pistol is also very old. It could just be that the parts haven’t been used in such a long time that they just need to be broken in again. I shot it over 100 times for today’s report, but it’s still giving me broad velocity ranges.

Whatever the cause, the pistol isn’t functioning like an FWB target pistol should function. But here is the good part. Feinwerkbau target airguns are made with the same care and precision as Rolls Royce automobiles. They are built to last, and unless this pistol has some modification that is irreversible, it should be able to be brought back to specification.

We are going to find out whether that’s true, because I plan to have the gun looked at by a top airgunsmith.