Today I start looking at the Air Bolt from Air Venturi. This product is a package of 6 arrows that sell for $120.00 at Pyramyd Air, and I know there will be lectures on the cost of crossbow arrows today. Because that’s what the Air Bolt is — a crossbow bolt.

HOWEVER — and this is the news today — with the Air Bolt, you don’t have to buy another gun. If you already own a .50 caliber big bore airgun — and hundreds, if not thousands of serious U.S. airgunners already do — there is nothing more to buy. You have everything you need to begun shooting.

Does that mean that this bolt works in a Wing Shot air shotgun? Yes! I am testing it in a Sam Yang Dragon Claw 500cc rifle which will be important to know later in today’s report.

The first thing I thought when I was told about this product is — oh, boy — another air bow! We don’t know yet what to do with them, as they are not yet legal for hunting game in the United States. You can hunt hogs and other pests with them, as there are no laws governing the guns used for pests, and you can hunt game on exotic game ranches because they do not come under the state fish and game laws. But for taking the whitetail, blacktail and mule deer that are the most common game animals in this country, they are not yet legal.

Crosman, who brought out the Benjamin Pioneer air bow earlier this year, is actively working to change the game laws and get air bows legalized. But it’s an uphill battle. Not only do they have the various state governments to contend with — there is also strong opposition from the archery community. Archers don’t want to see air bows considered equal to conventional bows. But it’s worse than even that.

The archery community is itself split into numerous warring factions. Longbow users dislike crossbows who were their greatest enemies before the air bows came along. Now they find themselves begrudgingly aligning with the crossbow camp against the air bows. This factional war is very much like politics in the middle east, with camps aligning for some purposes while maintaining their distance for others. I used to think airguns had a lot of special interest groups, but we are one big happy family, compared to archery!

This situation will take time to resolve, yet there are many shooters who could not care less. They don’t plan to hunt with the air bow — they just want one in case they ever need to. That is where the Air Bolt comes into play. With the Air Bolt you can own a big bore air rifle that is legal for deer in 6 states already, with more on the way. And, just by buying the Air Bolts, you suddenly own an air bow. too. But — it is any good?

Is the Air Bolt any good?

That is my challenge. To discover for you whether the Air Bolt makes any sense. Is it accurate? Is it powerful? Is it a product you should consider?

What I was told

When Pyramyd Air sent me 12 Air Bolts to test for you I was told they are a 430-grain field point (meaning not a hunting-type broadhead) that exits a Sam Yang Dragon Claw at up to 500 f.p.s. I was also told to expect to shoot some Robin Hood shots (where one arrow goes inside another because it hits at the same place) at substantial yardage. Those two things caused me some concern.

I asked Pyramyd Air to send me 12 Air Bolts to cover the lost and damaged ones I expected to have. But a greater concern was the backstop. What could I get that would be strong enough to stop an arrow weighing 430- grains and traveling that fast? No crossbow in the world comes close to that kind of power! In fact, when I went to the archery store to buy a backstop they were amazed when I gave them the specifications. They had nothing that was made for that power level. So I just bought the strongest backstop they had, which is rated to stop arrows traveling up to 400 f.p.s. and hoped it would do the job.

I went to Otho’s house to test the Air Bolt the first time. He has a shooting range with a dirt berm that would stop the arrows if they passed through the backstop. I filled the Dragon Claw to 200 bar (2900 psi) and commenced shooting from about 10 meters. I didn’t want to miss the backstop and I was shooting with open sights. It turned out that the arrow hit the bag on the first shot and for all 30-40 subsequent shots fired on this day. Hitting the target wasn’t a problem.

The Air Bolts are loaded from the muzzle, so of course the gun is uncocked when you load it. I had a little difficulty fitting the tail of the bolt into the barrel until I wet the o-ring with saliva — the fit is that tight. 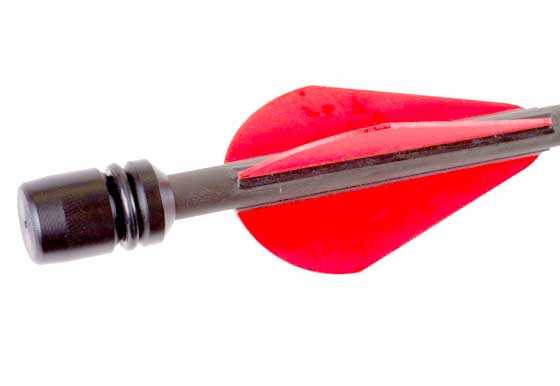 Air Bolt tail is almost .50 caliber, and contains an o-ring that seals the bore. 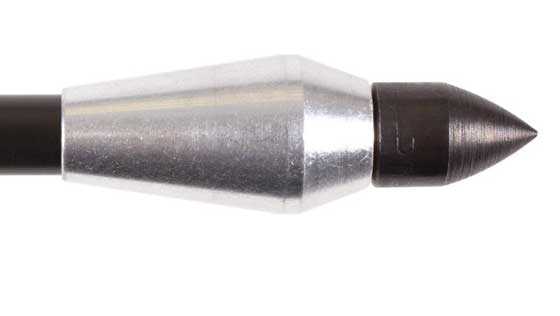 Air Bolt point is also nearly .50 caliber, and rides on the top of the rifling. 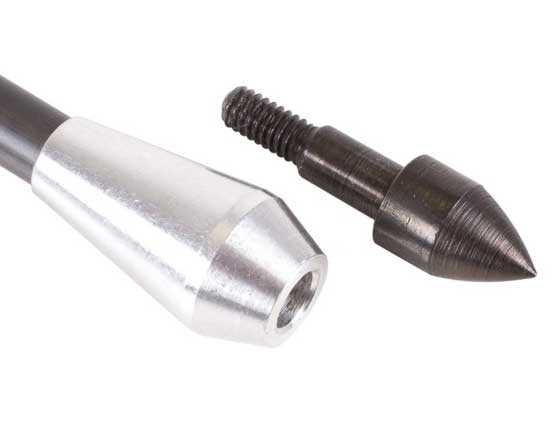 Once the shaft started down the bore it was easy to reach the bottom. A little of the point sticks out of the muzzle when it is loaded. I imagine with different rifles you might need a short ramrod if the barrel is longer than the 21.65-inches of the 500cc Dragon Claw I am shooting. I also imagine that barrels much shorter will not work as well, since the arrow head won’t be supported.

I fired shot 1 on low power to keep the arrow from passing through the arrow backstop. I needn’t have worried, though, because the arrow stopped easily inside of 8 inches. It seems the large head slows the arrow down very effectively. Also, it was very easy to remove from the backstop. Problem solved and time to back up to 30 yards.

At 30 yards Otho and I both tried our hands with the Air Blot. We discovered that on high power the arrows dropped about 12 inches at 30 yards. They also went sightly to the right. We both shot several times offhand to become familiar with the operation of the Air Bolts. 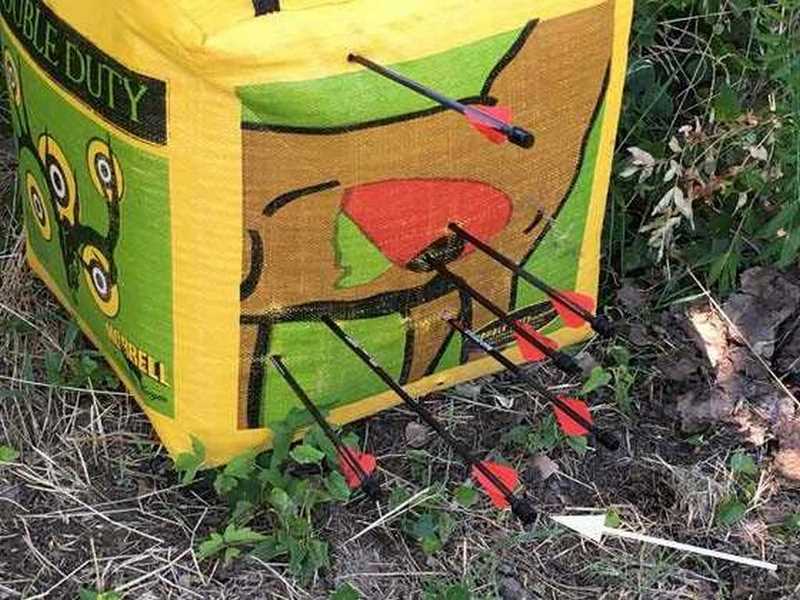 We shot from 30 yards offhand to become familiar with the operation of the Air Bolts. The arrow that is the least deep in the backstop (arrow) was shot on low power from 10 meters.

Once we were familiar, Otho tried a shot by aiming off the amount we now knew would place the arrow where he wanted it. It struck the center of the heart/lungs, which is a perfect deer shot for an arrow.

Otho put one into the boiler room from 30 yards by aiming off a precise amount. He points to where he aimed.

By this time we had fired 20 to 30 shots between us. I was impressed by how many shots I got on a single fill of air. That 500cc air supply really comes into play with Air Bolts! So I topped off the rifle at 200 bar according to the onboard gauge and tried 5 consecutive shots from 30 yards. I shot offhand supported, which means I steadied the rifle against a tree. I aimed off to hit the critical kill zone of the deer on the arrow stop face.

This is a 5-shot group I shot offhand supported from 30 yards. I didn’t see each arrow land, but it looks like they hit the mark with the first 2 shots and then started hitting lower on the target.

After 5 consecutive shots on high power the gun’s air pressure has dropped from 200 bar to about 160 bar. The arrows are hitting the target lower at 30 yards.

Today’s report was different from what I usually do. It had to be, because this product is different and I had to learn how it works before I could say anything about it. Obviously this is not an airgun I can chronograph in my office. Like a big bore air rifle, the Air Bolts have to be shot outdoors, with some thought given to stopping them.

Pyramyd Air has started testing the Air Bolts with broadheads. They used 100-grain Rage Chisel Tip 2 broadheads and three shots out of three passed completely through a backstop target bag that is as rugged as the one I am using. Broadheads are the tips that can’t be stopped. Tyler Patner reports putting 3 arrows with them into about 1.5 inches at 30 yards. They struck the target a couple inches below where the field points did, but you adjust the sights for that.

This product seems to be beyond a regular air bow, because it does not require you to buy a new gun and because it allows you to get double duty from your .50 caliber big bore. The only thing that would make it better is if the product could be caliber-selective, where you buy the shafts and ends separately. Then you could also have .45 caliber Air Bolts. There are a lot of .45 caliber big bores out there!

I plan to conduct a “normal” test, now that I know what to expect. I will mount an optical sight on the rifle next time. 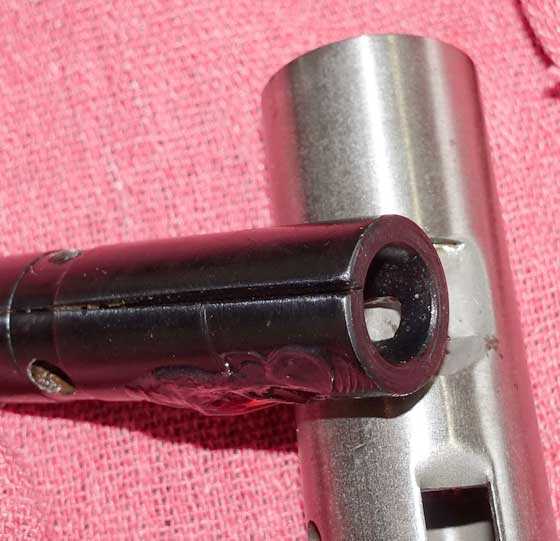