What in the world is a Quackenbush Number 7 airgun? Well, for starters we aren’t talking about anything made by Dennis Quackenbush. No, we are looking at an airgun made by a distant cousin of his, Henry Marcus Quackenbush, of Herkimer, New York. He worked for the Remington Arms Company as his first job out of school, and, in 1871, started his own company under his name.

H. M. Quackenbush was a bright and gifted man who is credited with the invention of the nutcracker in 1878. The company he founded still exists under the name HMQ Metal Finishing Group and I believe are still in business today in Syracuse, NY. Look in your kitchen for those initials on your nutcracker. 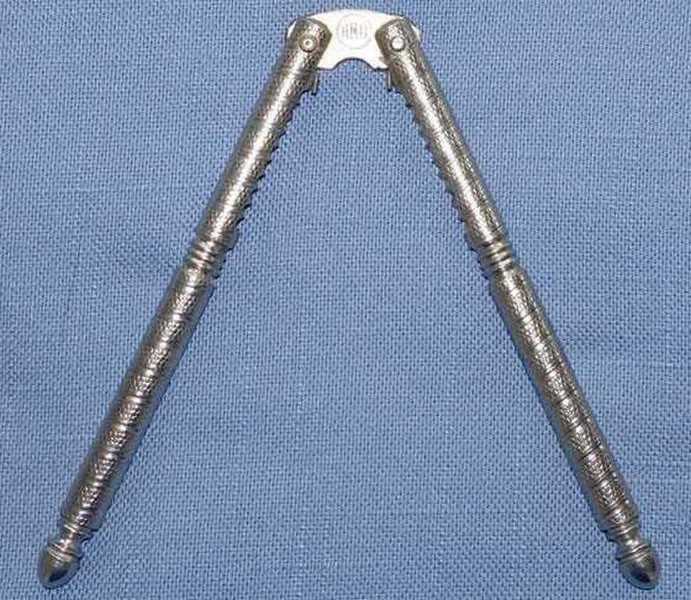 Almost every household in America has one of these nutcrackers. 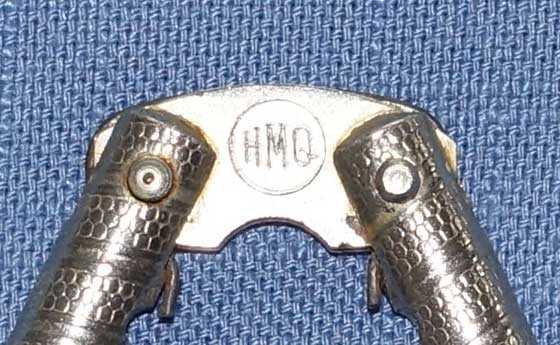 And Henry Marcus Quackenbush made it.

We are interested in their airguns, though. When Dennis Quackenbush came out with his Brigand in 1996, the old-time collectors moaned, “There goes the neighborhood! In 20 years no one will know there ever was another Quackenbush.” Well, it’s 20 years later and they were partly right. The average airgunner thinks of Dennis when he hears the name Quackenbush, but the collector is very aware of Henry Marcus.

H.M. Quackenbush made airguns and rimfire rifles. His “bicycle rifles” — so-named because they were small enough to carry while riding — are favorites of the rimfire collector crowd. Today, though, we are looking at his Number 7 air “rifle”. It’s really a smoothbore BB gun. I bought it, hoping it was really a vintage BB gun that was bored 0.175, because it is an early 20th century airgun and BBs were that size at that time. And for once I lucked out, because that’s what it is!

However, when I received the gun, I tried loading BBs and they fell through the barrel! Was I duped? No.

Today I was reading John Groenewold’s excellent book, Quackenbush Guns, and found the end label from a Number 7 box pictured in the book. It contained all the loading instructions! I had thought the projectile was supposed to be loaded from the muzzle, and the bore of the gun is too large to work with a 0.175-inch BB. It falls all the way through. But when the same BB is loaded PROPERLY into the breech, it fires with great force — as defined by complete penetration of 2 sheets of stout cardboard box. I’m not looking for an elephant rifle, here. I just want to shoot the thing, and, thanks to this book, I can!

I used 4.4 mm lead balls I have for other air rifles. At 0.174-inches, nominally, they are just slightly too small, but they do work.

Some facts about the Number 7

The Number 7 is one of three similar airguns made by Quackenbush. Number 6 was the first, and it was designed by Henry’s son, Paul, to be a less-costly-to-make (but not cheap) competitor for the BB guns of the day. The earlier Quackenbush models are made from solid material that is mostly brass. They are heavily nickel-plated. In fact, nickel-plating is one of Quackenbush’s hallmarks. No Number 7 gun was ever plated, though. They are either blued or browned, and mine is nicely browned with rust — the patina of age.

These are tin-plate guns — the title some collectors give to the technology of folded-metal construction. They had to be, to compete on cost with the other BB guns of the era. But the Number 7 is made from metal that’s much thicker than most BB guns.

Overall length of the test gun is a whisker over 38 inches. Taken down the longest part is the action that measures 26 inches. The pull is 13 inches. The gun weighs 2 lbs. 9.25 oz, which is in the ballpark with other single-shot BB guns.

The stock is a shaped slab of what appears to be gum — an inexpensive hardwood that can be stained to look like walnut. The shape is simple, as is the inletting. All of this is what is expected in a gun that competes on price. It retailed for $5.50 in 1918 — a time when $5 bought a Daisy Number 40 repeater that came with both a sling and a bayonet. A better price for a single-shot airgun like this would have been around $2.95 at the time, but Quackenbush was not willing to compromise on quality. Though it doesn’t look it, the Number 7 is a very well-made BB gun!

Looking at the muzzle would lead you to believe this gun is incomplete. It looks like the shot tube is missing. That’s just an illusion caused by the design of the gun. In fact, it’s all there. 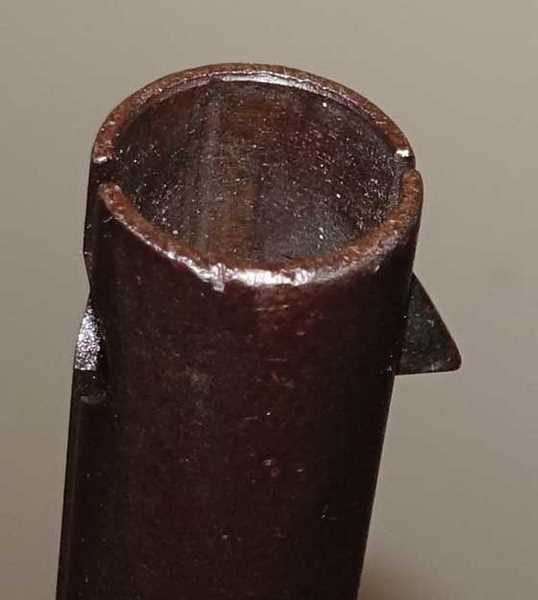 The muzzle looks unfinished — like something is missing. The shot tube is deep inside the barrel jacket.

The gun is a take-down model, which is in-keeping with many Quackenbush airguns. A single thumbscrew on the forearm comes off to separate the action from the buttstock. 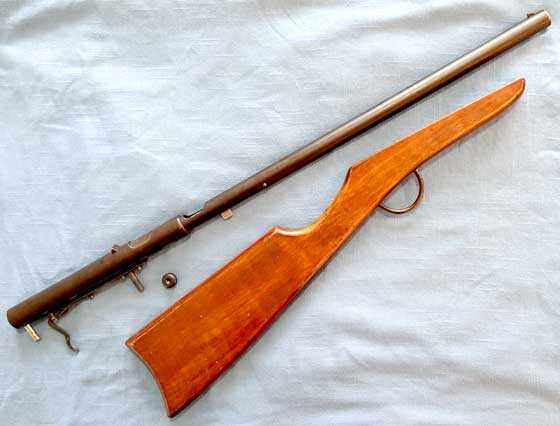 One nut comes off and the gun comes apart like this.

When I removed the stock, you can imagine my utter shock to discover this inexpensive folded metal airgun has an adjustable trigger! Of course it is a direct-sear type that no lawyer worth his or her salt would approve today, but this was an earlier time with simpler people who thought about things before they did them and accepted the consequences if they messed up! 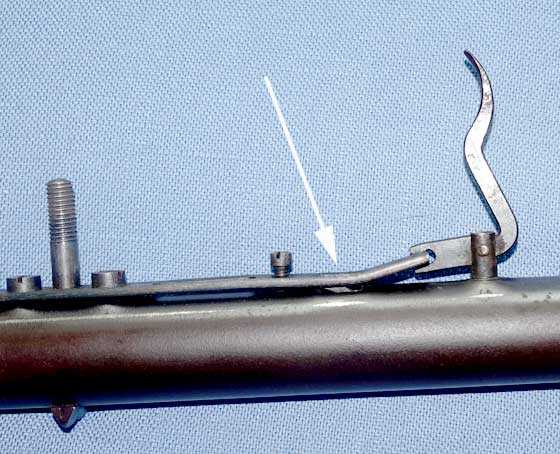 Look at what they did! The arrow points to a portion of the spring that’s punched out to form the sear. The screw to the left of it controls the amount of contact area. Not only is this the sear spring, they also made it the trigger return spring! This is how good engineering shaves cost while still creating a winning design.

The breech opens for the loading of darts, which I may also try, now that I know the gun works. I’m just glad I can shoot it at all. I have had it on hand for several months, thinking I got skunked on the deal. It turns out I probably blundered into a great deal on this one. 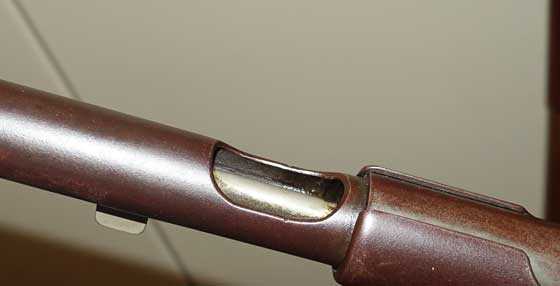 The breech is closed, but you can see the rear of the actual barrel through the cutout. The tab underneath is what catches on the frame when the outer barrel jacket is pulled back during cocking. 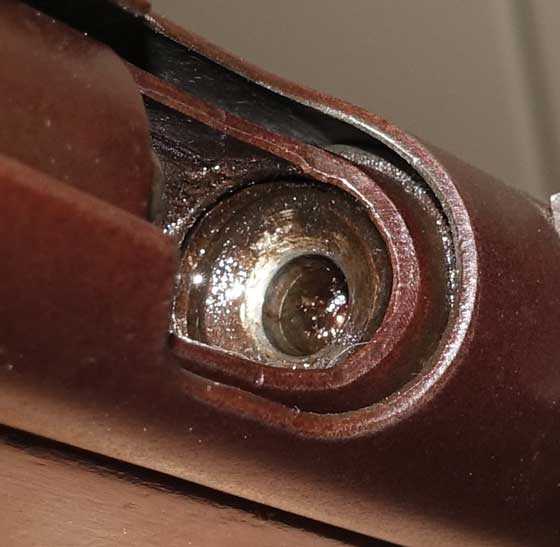 Gun is cocked and you can see the chamfered BB seat. 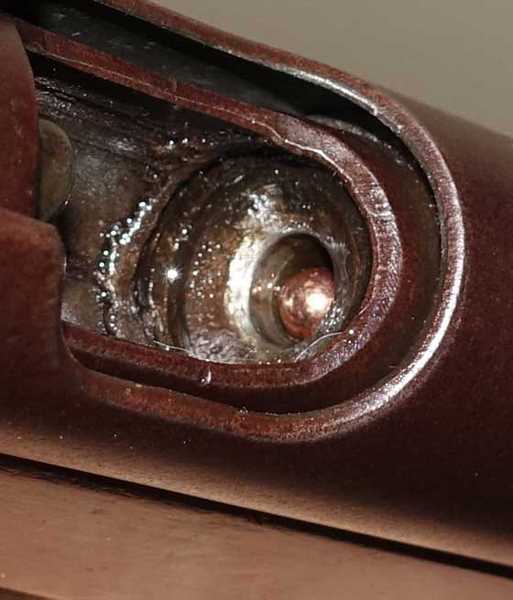 Most Quackenbush airguns cock by pushing the barrel straight back. That was common for the era, but not as common today. I think the Crosman M1 Carbine (derivative of the V350 BB gun) may be the last American-made example to use that type of operation. The British Gat pistols and rifles also cock that way. The push required is pretty stout, making this a gun for adults and older youths (or yoots, as Cousin Vinny likes to say). I will measure the effort in Part 2, when we look at velocity.

Yes, there are sights. They are just better than vestigial. The rear sight is a simple notch that may slide crossways in a dovetail. The front sight is a triangular blade that is actually the forward part of the shot tube. There’s not going to be any adjusting these sights. Wherever the gun hits, I will have to learn to hold off-target by that amount. And you can forget about optical sights. They are about a pertinent on this gun as they would be on a flintlock!

We are looking at a very old BB gun in the Quackenbush Number 7. It’s impossible to say when this one was made because there is no serial number, nor were there major design changes throughout the model’s life. I think it is a rare testimony to the longevity of a simple design like this that it has lasted for perhaps a full century and is still working well. 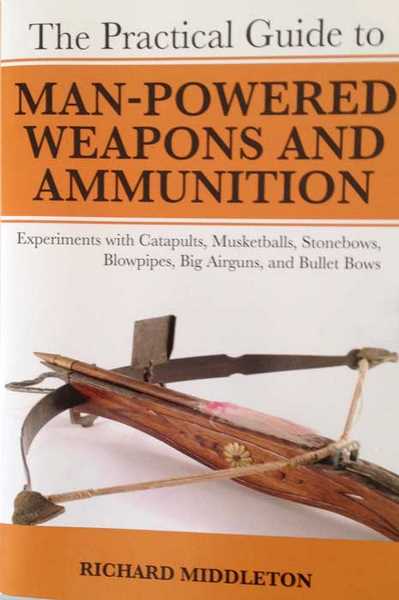 Man-powered Weapons and Ammunition: A review