This is the continuing fictional saga and guest report of a man teaching a woman to shoot. Today Jack continues to teach Jamell how to shoot a muzzle loading fowling gun.

DANGER: Today’s topic talks about loading and shooting a black powder firearm. Black powder is explosive, even in the open.

I haven’t written about this subject for a couple months because BB was having problems with a video I wanted for today. He has it finished now, thanks to blog reader Kevin in CT who edited three video clips into one movie. The edited video is online today!

How a flintlock works

A flintlock works the same as any firearm — burning gunpowder creates expanding gas that propels the projectile. It’s the ignition of the powder where the difference lies. I asked BB to film several things for me to show you today. These are the same things I showed Jamell, and indeed they are the same things I would show anyone who I was teaching to shoot a flintlock.

The video you are about to see has three parts. First BB cocks and fires the gun to show how the flint sparks against the frizzen. Next, he primes the pan with black powder and repeats the cocking and firing. When he does that, the sparks from the flint ignite the black powder in the pan and you get a small explosion. There is almost no sound when this happens, because the powder is not contained. This small explosion is what ignites the main charge of powder that’s in the barrel.

The vent or flash hole

I showed you the vent or flash hole in Part 13. When the powder in the pan explodes, the hot gasses go in all directions. Some of them hit the vent and actually go through the tiny hole. At the other end of the vent hole is the main powder charge, waiting for the spark that starts it burning. Only now the gasses are contained, except for the tiny open vent hole. Black powder is a low explosive, and the main charge now “burns” so fast that everyone calls it an explosion. This time, though, because they are contained, the expanding gasses can only go in one direction — behind the bullet (or shot charge) and out the barrel.

It took you a couple seconds to read that paragraph. But the black powder that’s burning at 11,000 feet per second burns in a few milliseconds. To our eyes, it’s an explosion. And because of the gun’s barrel, the explosion is both powerful and directed. This will all happen quickly in the video, so you might want to watch it several times.

One more thing before you watch. BB talks about using a pinch of tow several times. What is tow? Tow is/are the fibers of the flax plant, before they have been spun into something useful. They are fibrous, cottony and bulky, so they make a great natural stuffing for a black powder gun.

In the video, BB refers to the gun as a rifle, but it’s not. It’s a smoothbore — a fowling piece that is a primitive shotgun. BB loads it with a single ball instead of shot, but I told Jamell that I would teach her both loading processes — ball and shot. A fowler is what she has, and it’s the principal gun that Americans used in the 18th and early 19th centuries. She got it both because it is historically authentic and also because the one she got is a work of art in her eyes.

Now that you have watched the video, let’s see how Jamell accepted all of this. First, she immediately comprehended how the lock works. She only needed to see it one time and she remarked, “It’s like a lighter!” Which it is. In fact, in the day when flintlocks were the principal firearm, people started fires with their gun locks. That small explosion will catch anything that’s combustable on fire right away. But there were also purpose-built mechanisms that had just the flint lock but no barrel. They were called fire starters. 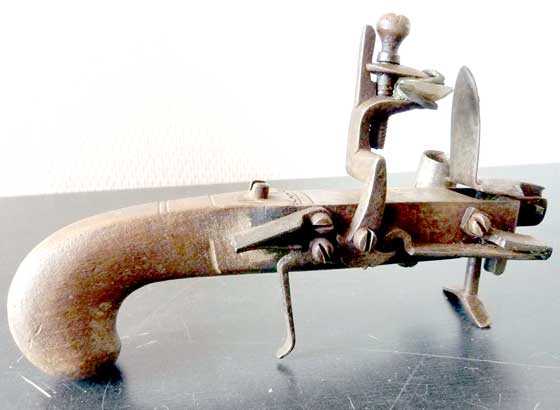 The real deal! An antique fire starter that uses a flintlock.

Now that you have seen the small noiseless explosion of the powder in the pan, you understand that it can start anything on fire. It isn’t limited to gunpowder. Anything that will burn readily can be set on fire this way. Or, lacking a fire starter, a flintlock firearm can also be used. It’s clumsier, but will work if you handle it right.

Now it was Jamell’s turn to try shooting her new gun. You saw how the gun performed when BB shot it. I watched as she loaded it, step-by-step. Then she shouldered it like BB did and fired.

Her first impression was that the explosion in front of your face is startling, but the gun fires so soon thereafter that you don’t have time to react. She said she thought she might flinch on the second shot. Most shooters do. In fact, it takes a lot of practice to hold a flintlock steady when it fires. Some never get it right. The way that a percussion gun operates is so similar to any other kind of firearm that experiencing a flintlock for the first time is usually startling. Shooters think that because they are loading their percussion guns from the muzzle they are Daniel Boone. In fact, they are nothing like Boone until they feel the fire from the lock on their face and experience the double pulse of a well-managed flintlock.

Jamell missed the 50-yard target altogether on the first shot. On shot number two she landed on paper, but about a foot from her aim point. We have to remember her gun has no rear sight. She is using part of the barrel aligned with the front sight as a reference.

I told her that accuracy wasn’t important at this stage. She was learning how to manage a flintlock, which takes some skill. And each lock operates differently, so you really do have to learn your gun. Her third shot was a misfire that caused her to clean out the vent with a pick before priming and trying again.

In all Jamell fired about 10 rounds in one hour. That averages out to 6 minutes a shot, which is pretty much par for the course for a new shooter. In the future she has to play with patched balls, setting flints in the cock, increasing the powder charge and several other things. All of this to both learn her new gun and to learn how to shoot it accurately

Next I will teach Jamell how to adjust her techniques for accuracy. 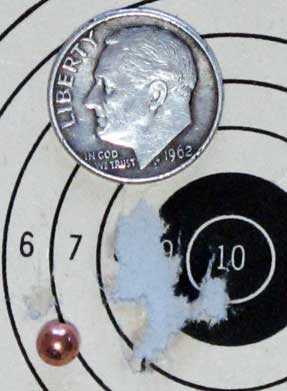