The BSA Airsporter Mark I is an all-time classic.

A few weeks ago I landed several great airguns on the Gun Broken auction website. One was that Mauser 300SL target rifle that we aren’t done with yet and another was the BSF S20 pistol I’m looking at now. The third one was a BSA Airsporter. It’s an taploading underlever whose lever is concealed in the forearm, so it looks much sleeker. I’m sure when it first hit the market in 1948 that it sent shockwaves around the world. In fact Falke copied the action for their famous model 80 and 90 rifles, and Anschütz did the same when they made the sporting rifle that later became the Egyptian Hakim. They all started with the Airsporter Mark I.

The cocking lever extends down from the forearm.

According to the Blue Book, Volume 11, an Airsporter Mark I in 100 percent condition (like new) is worth $300. I will pay that for every one you bring me in that condition. I’ve never seen them go for that little in the U.S., and I’ve yet to see one that was better than about 85 percent. This rifle commands respect — especially the Mark Is and IIs. The later Marks do sell reasonably, but it’s the first two that people really want. So imagine my delight to discover that the Airsporter I had won in the auction was a Mark I. The seller could have doubled his bids if he had known to explain that in his description.

How to date your BSA

This rifle came in both .177 and .22 calibers, and the one I got is a .22. You can tell which Mark you have by the serial number. Here is a table to look that up. My rifle serial number has the prefix “G” which pegs it as a .22 caliber Airsporter made between 1948 and 1954. The 6-digit serial numbers tells me mine is a later gun in that range.

My rifle has about 80 percent original blue with some wearing of the black annodized aluminum (or should I say aluminium?) receiver. My stock has about 85 percent original factory finish on the beech wood, which looks cheap, but it’s one of the best-finished original Airsporters I have seen. Most of them have no finish left, and the wood has been waxed to a soft patina. They look much better that way, but in the condition mine is in it is definitely more collectible.

Mine came with a cheap scope. No — it’s not another of those scarce BSA scopes that came on my Meteor Mark I. It’s a cheap Dianawerk 4×20 tube that, in 1950, was probably all the rage. My rifle also has the original open sights that adjust in both directions. After the problem with the Meteor, that was a blessing! The front sight should have the same pressed metal hood that the Meteor has, but this one is missing. I will shoot the rifle with the scope first before I get to the open sights, because it was clamped down tight and might actually be on after all these years. 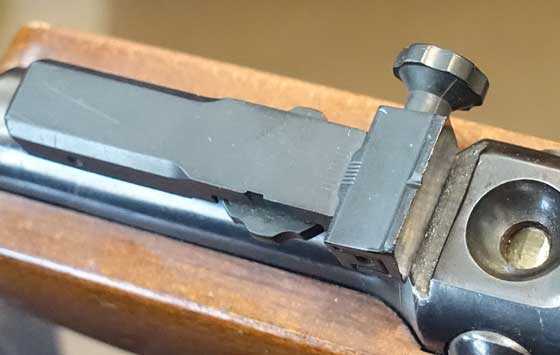 Rear sight adjusts for both windage and elevation.

W.H.B. Smith reviewed the BSA Airsporter and concluded it would never be sold in the U.S. because the quality that went into the gun was so high that it would have meant a retail price of about $55 in 1957. This was just after Sheridan had learned their lesson that the Supergrade priced at $56.50 was too much for Americans. The few Airsporters that did enter the U.S. did so through returning servicemen, exports into Canada and a host of similar small doors.

The Airsporter is a medium-sized air rifle, measuring 44 inches overall with an 18-3/4-inch barrel. The length of pull is 13-3/4-inches. The rifle weighs 8 lbs. In its day the size and weight would have shocked American sportsmen who were used to much lighter Benjamins and Sheridans. But today it seems to be sized like an average airgun. How the times have changed!

According to Smith, I should get velocities of around 550 f.p.s., but of course that would be with 1950s pellets. I imagine today’s pellets can be coaxed just a little faster. We shall see.

The stock on my Mark I is plain-Jane. Earlier Mark I stocks had raised panels on either side of the forearm with finger grooves running down their centers, but my stock is much plainer. The forearm is square-sectioned and feels clunky in my hands. I’ve felt those older stocks and they are much warmer and more comfortable to the touch.

The Airsporter trigger has two screws for adjustment. I will check them out and see what they do, if anything. The trigger blade is very wide and will feel good when I shoot for accuracy. 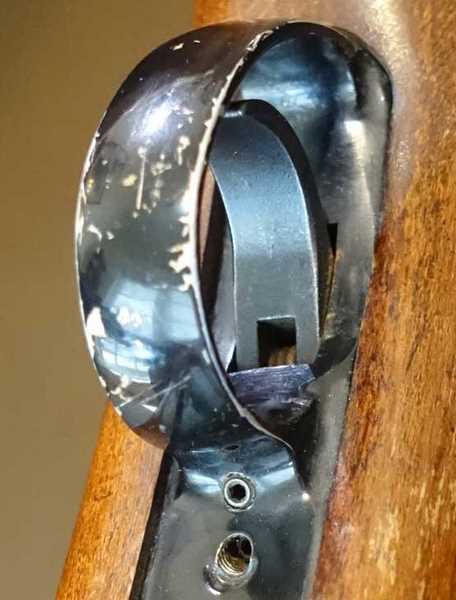 The finish on the wood stock is thin and chipping off. there are numerous scratches that show up vividly because when the wood is scratched, it turns very bright.

I have gone over my rifle with a tactical flashlight and I see some surface rust speckles in some hidden areas, so I think I’m going to remove the stock and clean the entire outside of the metal with steel wool and Ballistol. The steel wool won’t harm the blue and the Ballistol will stabilize the rusted areas. It might do the wood some good, too. I’ll experiment.

When I got the rifle the cocking was stiff and jerky. It was as if the piston seal was hanging up inside the compression chamber. I filled the loading tap with silicone chamber oil then closed it and let the rifle sit for a day on its butt. The oil ran back into the compression chamber and softened the leather piston seal. I also put some Tune in a Tube grease through the cocking slot to cancel a buzzy mainspring. The rifle now shoots calm and steady with a puff of smoke that tells me the piston seal is still oiled.

That’s it for now. Just know we have another classic air rifle to test!

NOTE from the author — This is not a Mark I Airsporter. It’s a Mark IV. The serial number is not G, it’s GI, but the lettering they used looks like the number one. Thanks to reader Dom for spotting my mistake. I will change the title in Part 2