The BSF S20 pistol looks like a breakbarrel rifle that’s been cut down to fit into a pistol grip.

I saw my first BSF S20 pistol in an antique shop in Fürth, Germany in the mid-1970s. I went there to buy old clocks that the shop had in abundance. To me the pistol on the table looked like a small air rifle that had been cut down and fitted to a pistol stock. It wasn’t until I returned to the States and started learning about airguns that the genuineness of the BSF S20 pistol was discovered. I had lived for 3 years and 9 months in Erlangen, the city that was home to the famous airgun manufacturer Bayerische Sportwaffenfabrik (BSF) without realizing it!

Veteran readers of this blog know that I have already reported on the S20 Custom Match version of this pistol. That pistol shares a lot with this one, but the trigger adjustments on the Custom Match are different (and finer, I believe), as are the sights, front and rear. And the grip on the match pistol is more contoured in a target style, where this one is plainer. It’s what the Germans would call a sport grip. But the basic powerplant parts are the same on both pistols. 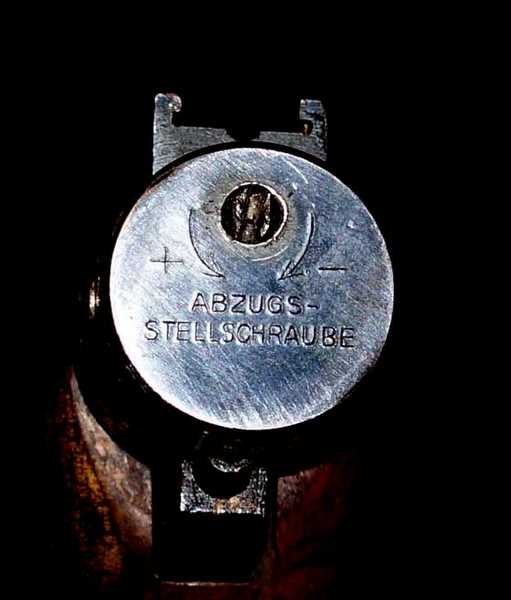 The trigger adjustment is one screw in the back of the end cap.

I found this pistol on an auction website, along with several other nice airguns. I’ve already told you a lot about the Mauser 300 SL I found there, but there is still a BSA Airsporter Mark I report coming. The pistol we are examining today was priced low enough that it attracted my interest, and the competition was not strong. I put in a bid and won it for even less than I was prepared to pay — mostly because I think I was the only bidder who knew what it was! That’s where owning a copy of the Blue Book of Airguns pays off big time.

The pistol came with some faults that were pointed out in the auction listing. The rear sight is missing its adjustable notch, the right grip panel screw was missing and the escutcheon on the right side of the grip was gone. I need to find or make a rear sight notch and I don’t know what to do about the escutcheon, but I had a replacement grip screw in the S20 Match pistol box. So that was fixed right away. 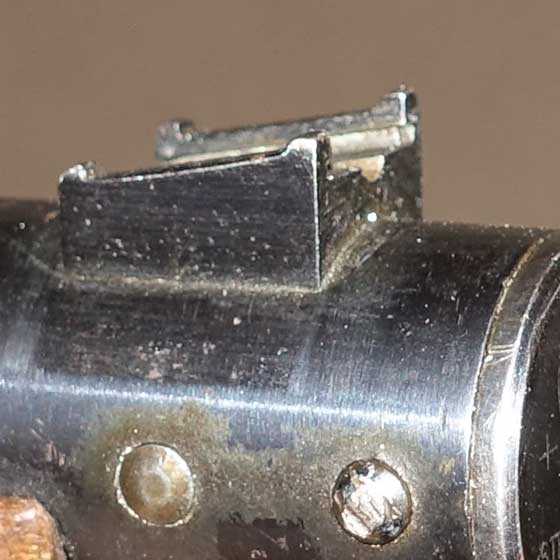 Rear sight is missing the sliding notch. It should be easy to make.

The listing also mentioned that the gun shot with low power, but that’s where a knowledge of vintage airguns comes in handy. I know that both the breech seal and piston seal in this pistol are made of leather. I can make them easily, plus they were probably dry and might respond to a good oiling. When I got the gun I was proven right about the oiling. I oiled both seals and the pistol’s power perked up!

Despite its appearance, the S20 is not the simple air pistol it appears to be. Nor is it a cut-down spring rifle like I first thought. It’s more of an air pistol that was designed by men who built air rifles for a living. It features a rear sight that adjusts for elevation and an adjustable trigger. The lockup at the breech is bank-vault tight, yet it pops open with ease when you want it to. The pistol looks like it will be hard to cock, yet I find it relatively easy for the power of the gun. That’s because of a long piston stroke. 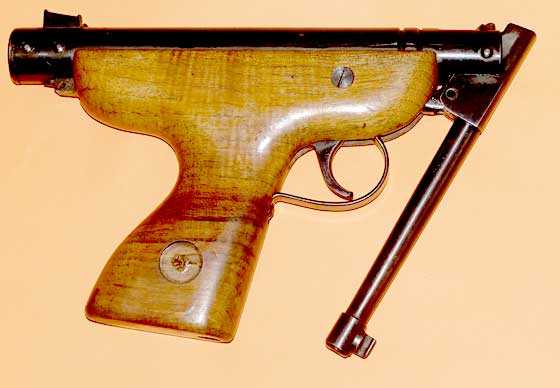 The piston has a long stroke for power without hard cocking force. Notice the missing right grip escutcheon.

The BSF S20 is a large breakbarrel air pistol. It’s 14-3/8-inches long by 5-1/2-inches high. The barrel is 6-7/8-inches long. It weighs 2 lbs. 6 oz. which, while substantial, is not overly heavy. The barreled action is all blued steel and the stock is a one-piece pistol grip made of what appears to be light blonde walnut. This is an airgun from the classic days of post World War II.

The S20 was apparently not imported by either Air Rifle Headquarters or the Beeman company. Both sold the S20 Custom Match model, but perhaps they both felt the standard S20 competed with the Weihrauch model HW70 too much. I don’t know why it wasn’t sold by them, but it makes this model harder to find in the U.S. than the more sophisticated Custom Match version.

What to do next?

I have already put a screw in the grip. I need to make a rear sight slider and I need to test the pistol for power. If it’s low I will disassemble it and rebuild it. I have the performance of my S20 Custom Match to compare to.

Next for this blog will be a test of the velocity. That will be followed by a decision of whether to repair the rear sight or overhaul the powerplant next.