The Benjamin 392 multi-pump pneumatic is still in production. How can this be an historical report? Well, the 392 is still being made, but the pump assist modification is not. It has lapsed into the history of airguns.

At its foundation, this rifle is a standard Benjamin 392. Not much is changed, as far as the performance of the rifle goes. The inventor did optimize each rifle he modified for a slight velocity increase, but that wasn’t the purpose of the modification. Don’t confuse this with the Steroid Streak conversion that Mac-1 can do. That one does increase the power of the gun by a considerable amount.

The pump assist is there to reduce the effort required to pump the rifle. For the first 3-4 strokes a 392 is fairly easy to pump, but as the number of strokes goes up, so does the effort that’s needed to complete them. Here is a comparison chart of pump effort for standard and modified guns. 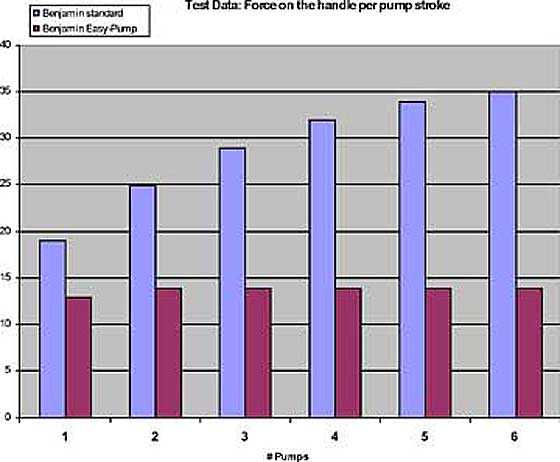 Darker bars are the modified gun. Lighter bars are a standard gun. Scale on the left are the pounds of force applied to close the pump handle.

I will test the pump effort for you in Part 2, when I test velocity. In the past I have noted that the maximum pump effort remains around 14 pounds for the pump assist. I can’t remember if I actually tested it or just took the word of the inventor from the chart shown above. It’s just much easier to pump is the best I can tell you now.

This is the key to the pump assist. The mechanism, which you can see adds extra levers to the rifle’s pump, changes the geometry of the pump stroke as the number of strokes increases. It does this based on the resistance of the reservoir inlet valve that increases as the pressure inside the reservoir rises. The pump assist compresses the air more with each stroke, and the geometry of the pump mechanism increases in efficiency as it does. 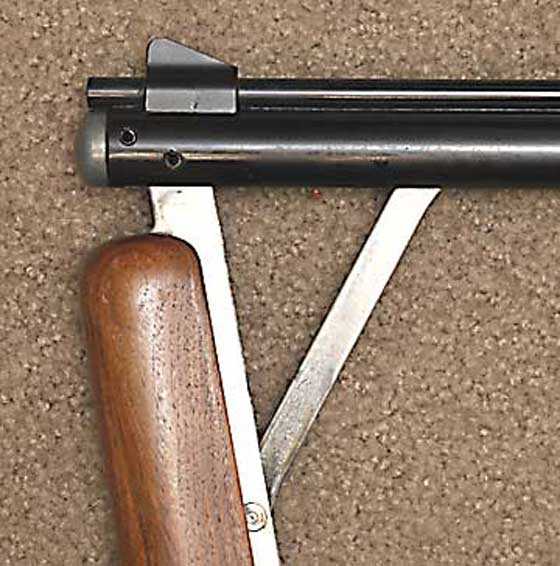 This Sheridan Blue Streak pump mechanism is virtually the same as the standard 392. Notice there is a single pump rod that connects the pump arm to the sliding pump head. 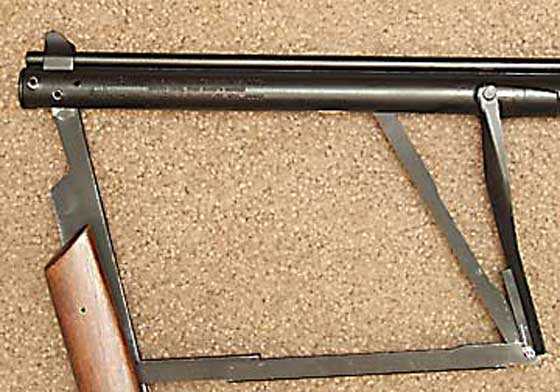 The pump assist adds two additional rods that connect to the pump rod. Where they meet (at the lower right) is the fulcrum of the pump assist mechanism, and this is what changes (position) as the number of strokes increases.

Robert Moss invented the pump assist and it took him a long time and many prototypes to get it right. It wasn’t just inventing something that worked the way he envisioned it. That was the easy part. The hard part was finding the right materials that would allow the pump assist to be built into a Benjamin 392 without adding a lot of extra weight and bulk. Also the materials that were needed were very exotic metals with high cost, so Moss had to find ways around that. Nobody wants to pay more to modify their 392 than the rifle costs originally! 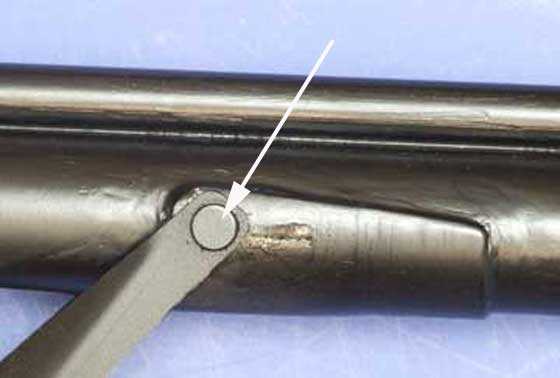 The anchor point for the pump assist is silver soldered to the pump tube. The pin that the pump assist link pivots on (arrow) had to be made of extremely tough material to withstand the stresses of continual pumping.

In the end Moss found what he needed and learned how to make it. He was able to convert several new rifles and bring them to the Roanoke airgun show, where I bought one. But he wanted to reach more airgunners and was daunted by all the marketing that is involved.

He decided to enter into partnership with Air Venturi, to modify 392s and 397s for them. They already had the distribution network established, so it seemed to be the right thing to do. But it did add an additional layer of cost to the project, so Moss went back to the drawing board to see what could be done. The goal in the end was to get a modification that could be offered by Pyramyd Air for $100 over the initial price of the stock 392.

When people heard the price of the modified airgun they went ballistic. They thought Crosman should find a way to do this at the factory. People shouldn’t have to pay for it! Many shooters wanted the benefits of the pump assist, once they understood what they were. But very few were willing to pay for them. Bob Moss spent many years and a lot of money perfecting his idea, only to find the market wanted him to give it away. So the customers stayed away in droves, as they say. I think no more than 20 pump assist conversion were done. If it was more than that, it wasn’t a lot more.

Moss also showed Pyramyd Air owner, Joshua Ungier, a unique modification he had made to a high-pressure hand pump. I was visiting Pyramyd Air when he was there, so I saw it, too. He added two of his pump-assist mechanisms to a hand pump and created a hand pump that pumped with a lot less effort! The two pump assist mechanisms stuck out on either side of the pump and I thought it looked like a butterfly when it was pumped, so I gave it that title.

For some reason he wasn’t able to work out a deal with Pyramyd Air, so he took the idea to Crosman and they mocked up a non-working prototype that was shown for at least three years at the SHOT Show. I was thrilled at the thought of this new pump and really touted it in several SHOT Show reports, but so far nothing has come of it. 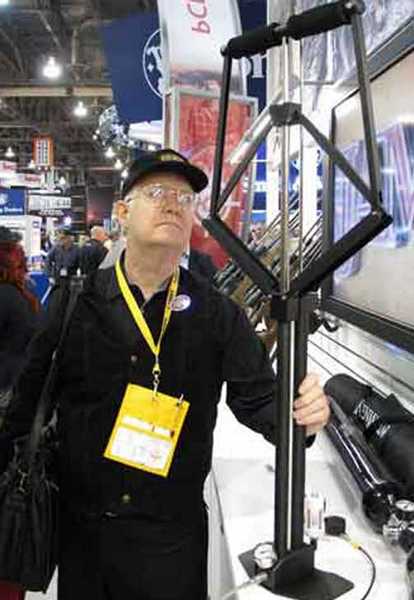 Crosman showed the butterfly hand pump for many years at the SHOT Show. They weren’t able to get it into production for a reasonable retail price. It has two pump assist mechanisms — one on each side.

What are Benjamins with pump assist worth?

That’s a good question. My friend Mac sold his pump assist 392 at the now-defunct Roanoke airgun show many years ago for around $200. Stock 392s were selling for about $135 then and as I recall the buyer was resistant to the higher price until Mac showed him what it was.

I wouldn’t sell mine for less than $300, and it’s not for sale. Maybe you can get a better deal at my estate sale in a few years. I like it because it’s a 392, but also because it shows the ingenuity of a man who wondered why something couldn’t be made easier. Then he made it easier and discovered that people weren’t willing to pay for it. That’s part of Marketing 101, but it’s a hard lesson to learn.

My plan is to test this rifle in the traditional way. Part 2 will look at the velocity, plus I’ll measure the pump effort for you and compare it to the effort of a Blue Streak. And I’ll measure the trigger pull, though that comes with the factory 392.

In Part 3 I’ll look at accuracy for you. We will see what a Benjamin 392 can do.

This should be an interesting report series.