The BSA Airsporter Mark I is an all-time classic.

Today is the first accuracy day for my new .22 caliber BSA Airsporter Mark IV. As the picture shows, it came with an old Dianawerk scope mounted, and I said I would test it with that first. So that’s what I did.

Today I shot off a sandbag at 10 meters, just to get familiar with the rifle. I tried it both using the artillery hold and directly rested on the bag. The first groups were shot using the scope.

The scope was not exactly on target like I had hoped, but it was close enough on the first shot that I adjusted it to hit near the POI. The scope is not adjusted for parallax as close as 10 meters so the image is fuzzy. The reticle is a German hunting reticle with three heavy black lines — two on either side and a pointer coming up from the bottom. You put the tip of the pointer on the target when hunting, but it gets lost on a black bull, so I set it at 6 o’clock.

The scope adjustments have no clicks and the POI moves very quickly, so I had to fuss with the adjustments a bit before I was satisfied. But after about 10 shots I was zeroed and decided to shoot a group with RWS Superpoints. Ten pellets landed in nearly two inches at 10 meters when the rifle was rested on the bag, so I used the artillery hold. Eight shots later I gave up on the scope altogether, because the group was already over 1.5 inches. Fortunately the scope came off easily. Now I would try the open sights.

Shot number one with open sights was left and low, so I adjusted the rear sight a little. Shot two went into the black at 8 o’clock, so I started shooting my group. The gun was rested directly on the sandbag. Ten shots went into 0.751-inches at 10 meters. That’s okay but not great. 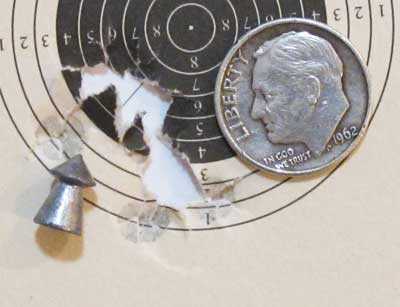 The BSA Airsporter put 10 RWS Superpoints into 0.751-inches at 10 meters when rested directly on a sandbag. That’s okay, but not exceptional.

I reckoned the rifle wanted to be shot from the artillery hold, so that was next. Same everything the second time except the hold. This time 10 Superpoints went into 1.392-inches! This is the first time that I can remember getting a bigger group from the artillery hold than directly rested on a bag! And it told me two things. First, the Airsporter wants to rest directly on the bag and second, Superpoints are probably not the best pellets for this airgun. 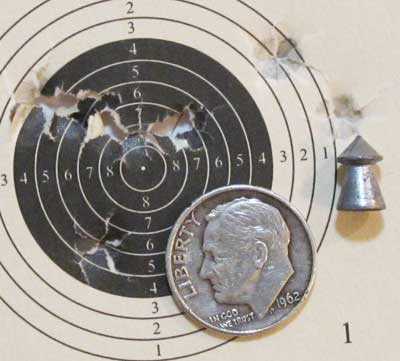 Eww! Yuck! Ten Superpoints from the Airsporter held with the artillery hold at 10 meters. The group measures 1.392-inches between centers.

I shot these groups with open sights using my right eye — the one that had the detached retina. That eye is now 20/100 and has a cataract that’s growing, but I was wearing my glasses, so I think everything was okay. The next group should tell me.

Next up were the pellets reader Dom recommended — the vintage 5.6mm Eley Wasps. I laid in a supply of these when they were still available in the late ’90s, so if they work I’m good to go.

Wasps hit the target much higher than Superpoints. They also got downrange faster and hit the steel trap with more authority. This time I watched as the hole in the target paper seems to grow slowly. I resisted looking at the target through a scope — hoping what I was seeing was really happening.

When the 10 shots were over I walked downrange and was very pleased by what I saw. Nine of the 10 pellets had indeed gone through the same hole, with the other shot landing a full half-inch below. I have no clue which shot that was, because they all looked perfect to me and I never looked at the target through a scope. I do believe that stray shot was caused by me and not by the rifle or pellet. It’s obvious that this Airsporter likes Wasps. 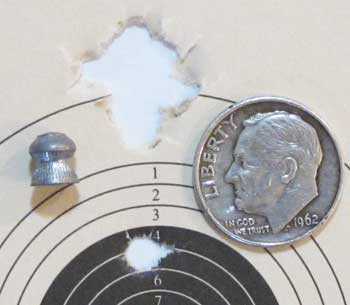 Nine of 10 Eley Wasps went into 0.413-inches at 10 meters. The other shot opens the group to 0.98-inches, and based on the tight round group of 9 I believe I did something to throw that one shot low.

The eyes have it

Clearly my eye is doing okay. Another shooter might do better, but this is probably as good as I ever could do with this rifle. And the Wasp pellet seems ideally suited to it.

I have to mention that the Airsporter feels as lot like shooting a powerful Hakim. The actions are similar, and the accuracy seems to be, as well.

The next move is to back up to 25 yards and try this again with open sights. I will probably try a couple different pellets at that distance, just to keep looking.

I am very pleased with this Airsporter so far. The trigger is crisp and the powerplant is tame with Tune in a Tube. It’s a delightful air rifle to shoot.