I told you about this BSF S70 rifle a couple weeks ago. I thought I didn’t win it in the online auction, but in fact, I did.

I have tested an S70 for you in the past. So, what’s so special about this one? Well, the truth is, that other S70 had some problems. First, it had no rear sight — just an optional peep that was sold by Air Rifle Headquarters and Beeman in the 1970s and ’80s. Next, it was very powerful. Though it carried the German Freimark that is put on all airguns of less than 7.5 Joules (5.53 foot-pounds), that rifle was producing over 12 foot-pounds. Either someone had been inside, or something funny was going on with the Freimark. 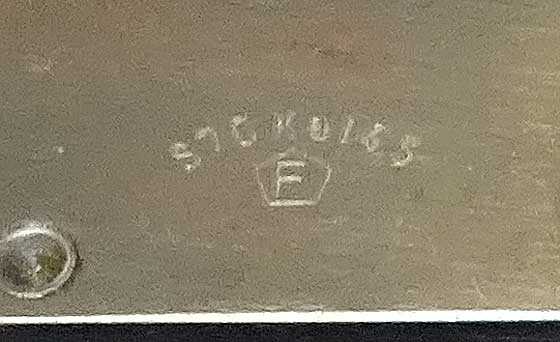 That F inside the pentagram is the German Freimark (free mark). It means the airgun develops less than 7.5 joules and is free from ownership restrictions.

The third problem was at sometime in that rifle’s past someone had pulled the trigger with the barrel broken open, and the rapid slamming shut had bent the barrel upwards. It was so bad that I wrote an entire series about bending airgun barrels — just so I could fix this one. At the end of that series I got that rifle shooting where the sights looked, and it is now a real pleasure to shoot. But in retrospect, did I actually test a BSF S70? Given everything I just told you, I think not.

BSF is a contraction of the company name — Bayerische Sportwaffenfabrik. They were headquartered in Erlangen, just north of Nuremberg, Germany. Erlangen, by an ironic coincidence, is the town where I was stationed with the Army from 1974-1977. I didn’t know BSF was there, and only discovered them after returning to the United States.

BSF made some beautiful airguns, several of which I have tested for you over the years, but the S70 stands out for the influence it had on airguns we know much better. The company fell on hard times in the 1980s and was purchased by Weihrauch (before 1987). The new owners used the parts of rifles that were on hand at the time to produce two interesting new models that Marksman brought over to sell in America.

These two rifles, called the Marksman 55 and Marksman 70 (interesting model numbers), were essentially the BSF S55 and S70. Initially they came with simpler triggers that were probably  the original BSF triggers. Before long, though, they were being shipped with Rekord triggers. Both Marksman rifles continued to use the BSF rear sight that we will see on this S70. Was the piston seal changed? I don’t know. Perhaps.

I don’t know how many of these two Marksman rifles were made, but it’s obvious they were made to use up the parts that Weihrauch got when they bought the BSF company. They were not new additions to the Weihrauch line. I think they all came to the United States, and they make an interesting footnote to both the BSF and Weihrauch histories.

However, the story doesn’t end there. Weihrauch had now become familiar with the insides of BSF breakbarrel powerplants, and within a short time the Beeman company, Weihrauch’s biggest North American customer, announced the Beeman R10. They called it the “son of the R1” because it produced R1 velocity while weighing several pounds less. The “secret” that allowed this to happen was a long piston stroke in a spring tube that was considerably narrower than the R1/HW80 tube.

I am not saying that the BSF S70 became the R10. I doubt there are many parts that will fit both guns without machining. But the idea of the long-stroke narrow piston was certainly how BSF achieved the power that it did. The R10 is very much a scaled-down R1, but I believe that there is at least a trace of BSF DNA in it. I know, for instance, that the R10 has a scope base that’s attached to the top of its spring tube instead of grooves cut into the spring tube, just like the BSF S70.

The scope base is attached to the top of the spring tube, rather than cut into it. 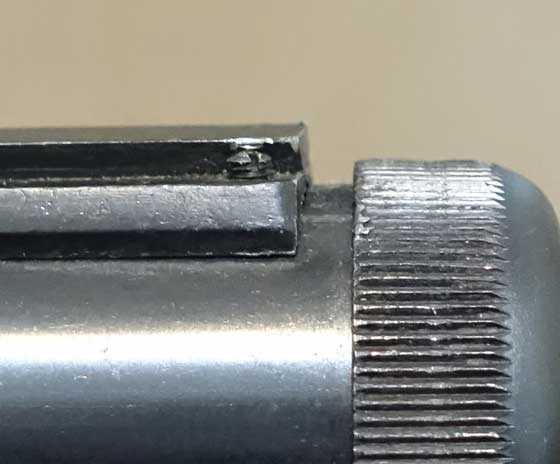 On the left rear of the scope base, a screw provides a positive mechanical stop for the rear ring. This was decades ahead of where most spring rifles were at the time.

The R10, which wasn’t a success, was soon followed by the Beeman R9 that was. The R9 was a redesign of the R10 that got most of the R10’s performance in a package that was more produceable. So, you could say that the Beeman R9 owes its existence to the influence of the BSF S55/70.

Although they aren’t seen in the U.S. as often, there is also a BSF model S60 and an S80. They fit into the scale of quality where their model numbers imply. I tell you that for the record, but know that the S55 and S70 are by far more prevalent in the U.S.

Now, let’s turn our attention to the rifle I’m testing. What is an unaltered BSF S70 rifle like? Well, they aren’t small and they aren’t large — sort of in the middle. The Blue Book of Airguns says they should weigh about 7 pounds and makes no mention of the length. Mine weighs 7 pounds on the nose and is 43.5 inches long. The barrel is 19 inches, stem to stern. The forearm is a square section that’s pleasantly thin. Overall the rifle feels and handles very much like an R9, which is to say light and easy-handling.

This is an old-school air rifle, so all the metal parts are either steel that’s been polished and blued or anodized aluminum, and there is precious little of that. The checkered panels in the forearm and pistol grip are pressed in and do nothing to help your grip. The beech stock is heavily finished with what looks like a clear synthetic finish.

Speaking of old-school, let me tell you what that means. Although this rifle could have been produced in the 1980s, its design was frozen in the 1950s. So the look , finish and materials all date to that time. It’s like a Checker Marathon in that respect. 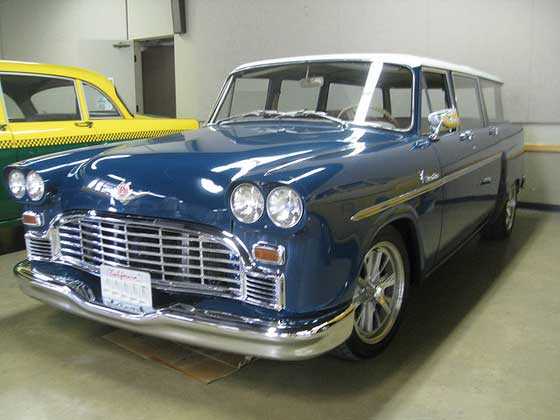 This 1983 Checker Marathon station wagon looks like it was made in 1958.

The trigger is adjustable, and BSF triggers are the only ones that have the adjustment instructions written on the triggerguard. The words are in German, but the plus and minus symbols tell you what the adjustments will do to the pull. 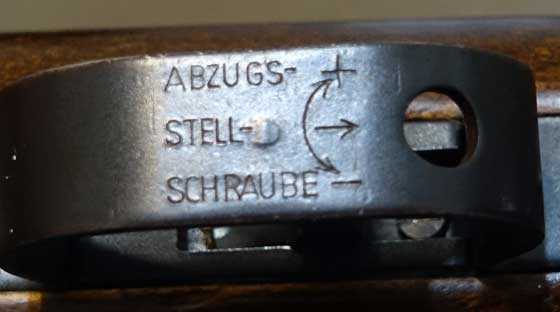 The directions for adjusting the trigger are engraved on the triggerguard.

I will say one more thing about the trigger. It is curved and the blade is slanted too far forward for my tastes. It just feels odd to my finger, and I always notice it.

The sights are conventional. Up front is a rather tall post with a bead on top. A sheetmetal hood goes over the front sight and clamps to the base, but this rifle didn’t have it when it arrived. It’s there to protect your hand while cocking, as much as anything else. The rear sight adjusts up and down via a sliding elevator up a stepped ramp. Windage adjusts with a thumbscrew and the adjustments have obvious detents. This is the sight my other S70 doesn’t have, so I finally get a chance to test it. And now I have the vision I need for the test. 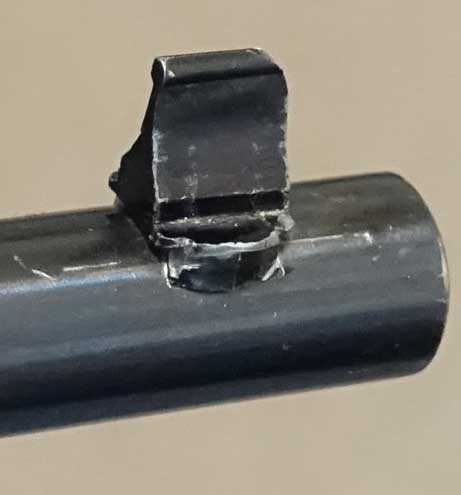 The front sight is very tall. It’s supposed to have a sheetmetal hood. 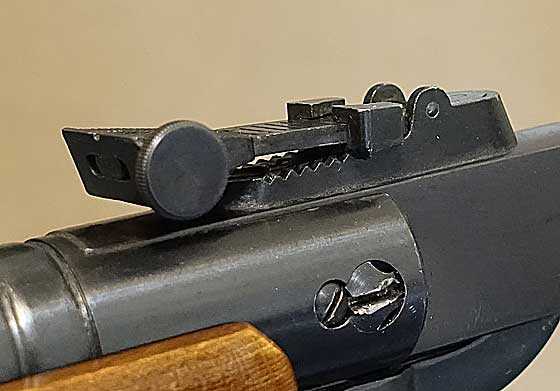 That’s as far as I will go today. At one time in the 1970s this rifle was at the top of the power pyramid. Today it will be a gentle shooter. I am extremely curious whether it will really have 7.5 joules of power. I’m betting it is more powerful that that.